10 things to do in Marrakesh

Marrakesh is a major city in Morocco bordered by modern neighbourhoods. Today it is one of the busiest cities in Africa and serves as a major economic centre and tourist destination. If being submerged in a vibrant, busy culture is high on your list, make sure you check out this city. Here is a list of ten things to do while staying in Marrakesh. Hope this will get you started.

Things to do while staying in Marrakesh: Circle the Koutoubia Mosque 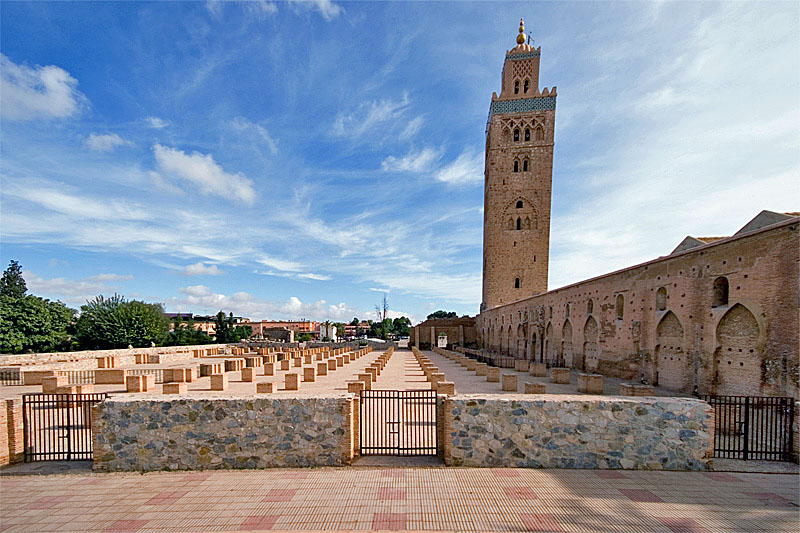 Koutoubia Mosque is the largest mosque in the city, located in the south-west medina quarter of Marrakesh alongside the square. The mosque is made of red stone and brick, and measures 80 metres long and 60 metres wide.

The minaret of the Koutoubia Mosque, Marrakesh’s most famous symbol, was built in a traditional Almohad style and topped with four copper globes. As it is still an active place of worship so non-Muslims may not enter, but it’s possible to get a good view of the exterior by walking around either side.

Work on your bartering skills at the souks 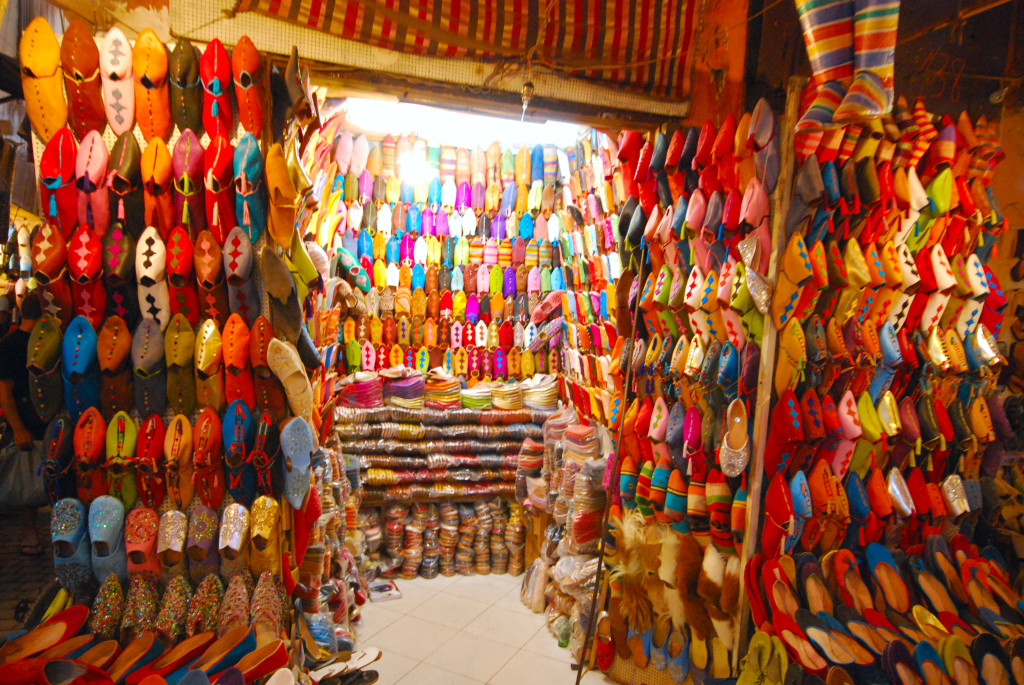 Colourful slippers for sale at the Marrakesh souks. Photo by wikimedia.org

Marrakesh has the largest traditional Berber market in Morocco and the image of the city is closely associated with its souks. Prepare to spend hours fossicking through the souks and bartering for treasures, as the maze of stalls is seemingly endless. The further you venture in, the more interesting they become.

Historically the souks of Marrakesh were divided into retail areas for particular goods such as leather, carpets, metalwork and pottery. These divisions still roughly exist but they tend to overlap. Many of the souks sell items like carpets and rugs, traditional Muslim attire, leather bags, and lanterns. Haggling is still a very important part of trade in the souks.

One of the largest souks is Souk Semmarine, which sells brightly coloured sandals and slippers, leather pouffes, and jewellery. There are many other souks which contain stalls which sell everything from food to alligator and iguana skins. 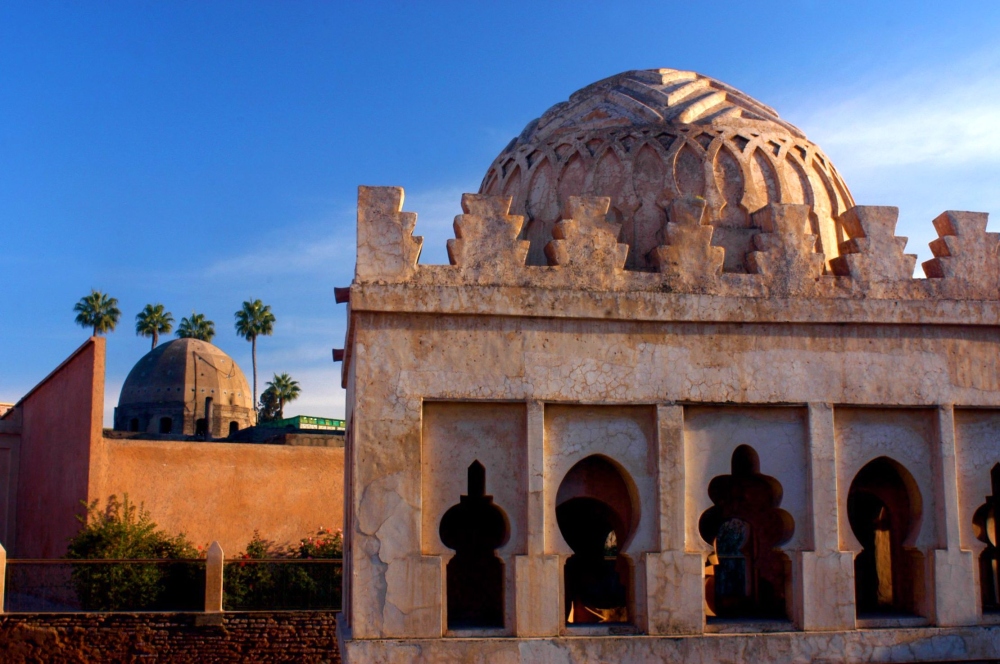 The Almoravid Koubba is a small Almoravid building in Marrakesh, Morocco, dating back to the 12th century. Set in its own fenced enclosure and sunk several metres below the street level, it is the only surviving structure from the era of the Almoravids – the founders of Marrakesh – and it represents a wormhole back to the origins of Moorish building history.

The Almoravid Koubba is next to the Museum of Marrakesh, about 40 meters south of the mosque of Ben Youssef. It was built in 1117, was restructured in the sixteenth and nineteenth century, was rediscovered in 1948, and excavated in 1952, after having been buried beneath one of the outbuildings of the Ben Youssef Mosque.

It’s worth paying the small admission fee to descend the brickwork steps and view the underside of the dome, which is a kaleidoscopic arrangement that is a must-see up close. 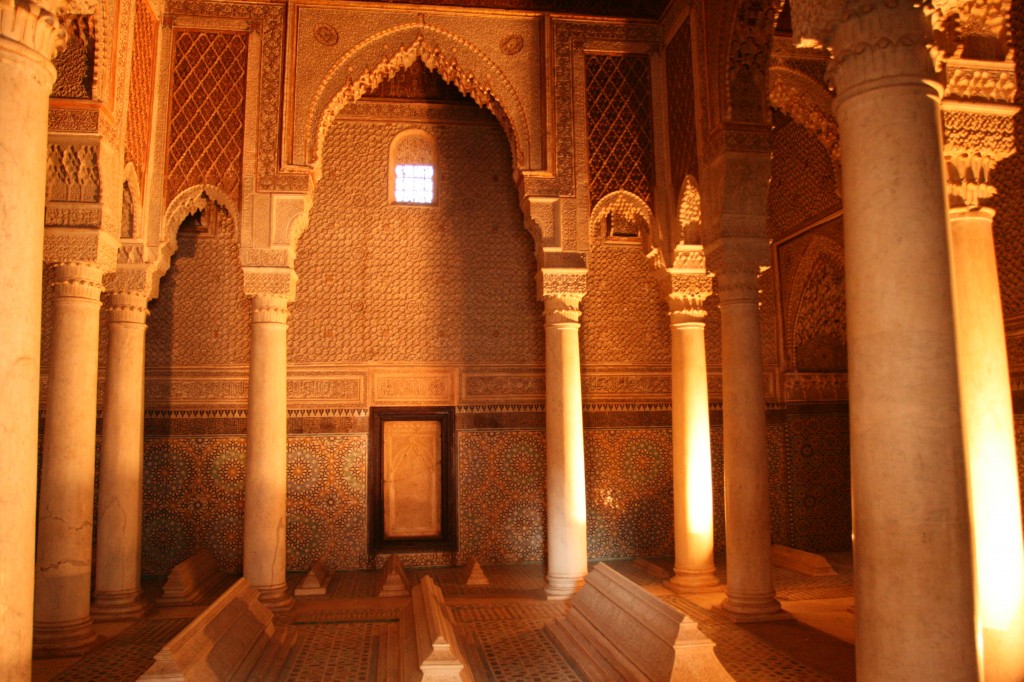 Inside the Saadian Tombs. Photo by tapastotajine.com

The Saadian Tombs were built in the 16th century as a mausoleum to bury numerous Saadian rulers and entertainers. It was lost for many years until the French rediscovered it in 1917 using aerial photographs.

It is located next to the south wall of the Almohad mosque of the Kasba, in a cemetery that contains several graves of Mohammad’s descendants. The building is composed of three rooms. The best known has a roof supported by twelve columns and encloses the tomb of al-Mansur’s son.

Dotted around the shrubbery are early mosaic graves. The identity of those interred is long lost, but the attention instead focuses on the three pavilions built during the reign of Saadian sultan Ahmed El-Mansour. Explore the historic tombs to get a true Marrakesh experience. 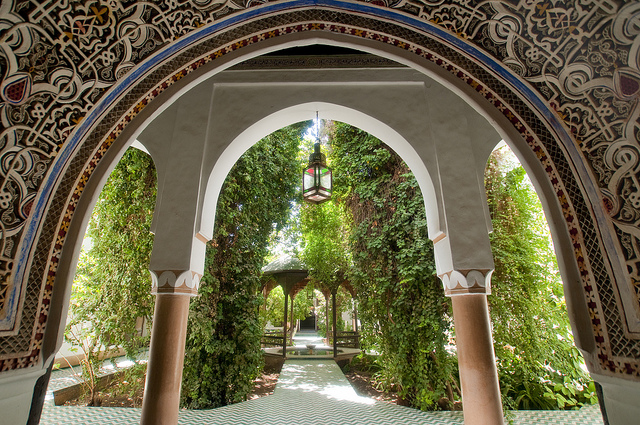 See the beauty of Dar Si Said Museum up close. Photo by staticflickr.com

The Dar Si Said Museum, located at Rue de la Bahla, Marrakesh, houses a large collection of crafts and woodwork. Among all the kitchen implements, weapons and musical instruments are beautiful examples of carved cedar which were rescued from the city’s lost dwellings.

Here you’ll find a solid exhibition of historic and some contemporary Moroccan art. The building itself is full of intricate Byzantine designs and colors. A remarkable collection of door and window frames is to be found around the courtyard, all encrusted with the most delicate and refined ornamentation. And in the streets outside you will soon understand that the town and its inhabitants know how to keep the traditions of their culture alive. 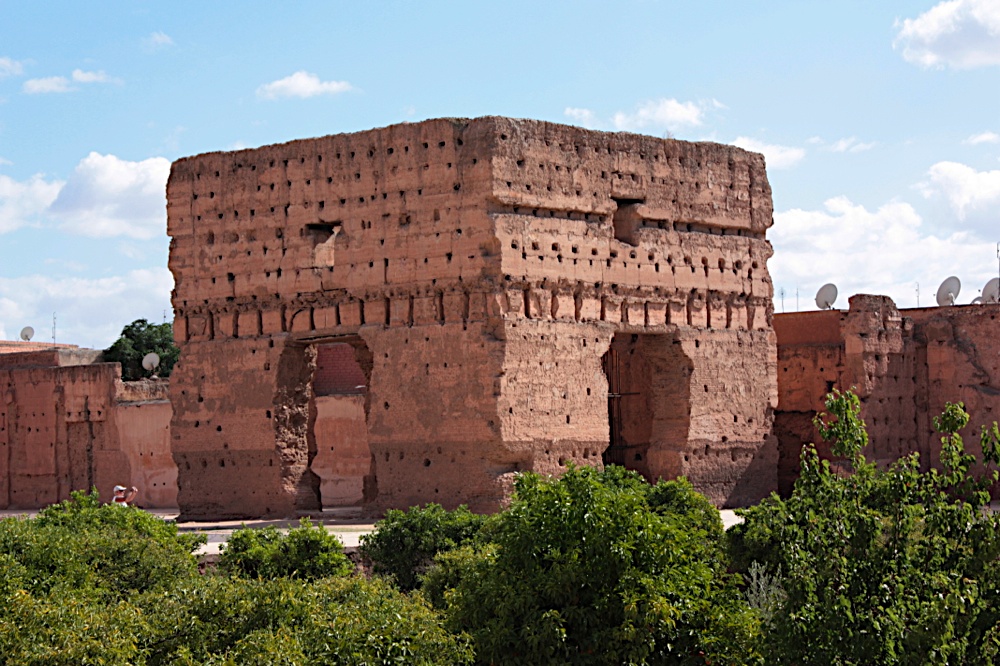 The ruin of El Badii Palace. Photo by darjenna-marrakech.com

El Badi Palace is located in Marrakesh and these days it consists of the remnants of a palace commissioned by the Saadian Sultan Ahmad al-Mansur in 1578. Today it survives as a ruin, but once it was a model of triumphal ostentation.

The original building is thought to have consisted of 360 rooms, a large courtyard and pool, richly decorated with Italian marble and hefty amounts of gold imported from Sudan. It also has a small, underground, tunnel-like jail with four cells where the king kept his prisoners.

The palace, which took approximately 25 years to construct, was torn apart in the seventeenth century by the Alaouite Sultan Moulay Ismail, who used the material obtained from El Badi Palace to decorate his own palace in Meknes. 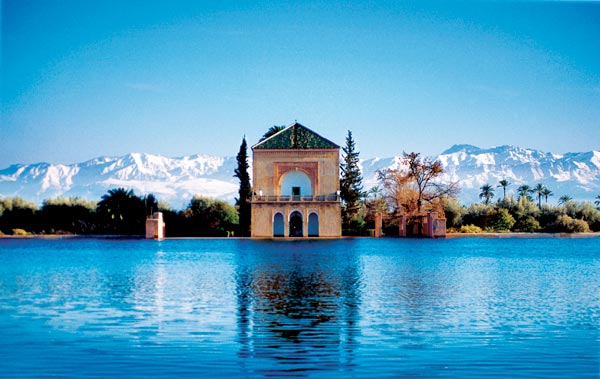 The Menara gardens are located at Aïn Mezouar, Marrakesh, to the west of the city, at the gates of the Atlas mountains. They were built around 1130 by the Almohad ruler Abd al-Mu’min.

The name menara derives from the pavilion with its small green pyramid roof. The pavilion was renovated in 1869 by sultan Abderrahmane of Morocco, who used to stay here in summertime. The pavilion and a nearby artificial lake are surrounded by orchards and olive groves.

The lake was created to irrigate the surrounding gardens and orchards using a smart system of underground channels called a qanat. There is also a small amphitheatre and a symmetrical pool where films are screened. Carp fish can be seen in the pond and it is the perfect place to spend a few hours soaking up the sun and scenery.

Have a belly dance 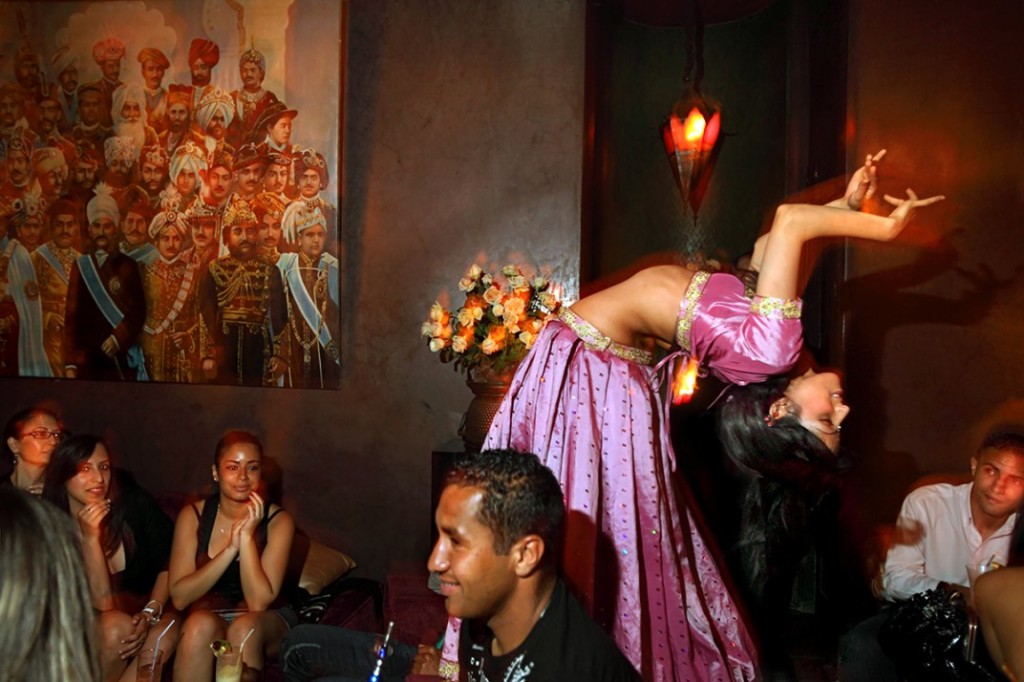 Have a belly dance at Comptoir. Photo by travel-exploration.com

The crowd is a mix of locals and wide-eyed tourists delighted to have stumbled on the Marrakesh they’d always heard about. Drinks can be pricey here but the nightly belly dancers are a must-see.Located at Avenue Echouhada is the Comptoir Bar and Restaurant – famous for its belly dancers. From the outside it’s a well-behaved little villa on a quiet residential street, but inside the place buzzes with dressed-up diners on the ground floor and upstairs you’ll find a sizeable lounge filled to the brim with people every night at the weekend. 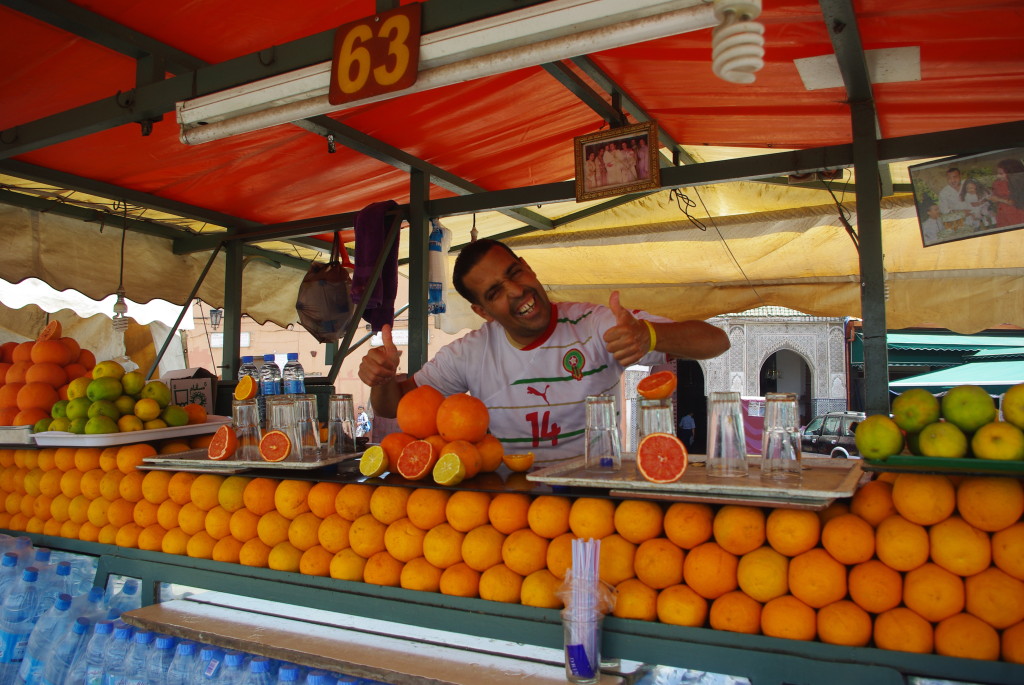 Try freshly squeezed orange juice from one of the many stalls. Photo by budgettraveltalk.com

Orange trees are plentiful in Marrakesh’s tangled alleys and exotic courtyards. Moroccan oranges are famous for their juiciness and tingling taste so it doesn’t come as any surprise that Djemaa-El-Fnaa, Marrakesh’s central square, is choc-a-block with vendors selling orange juice.

A glass costs 5-10 Moroccan dirhams which is approximately $1 USD. A number of juice sellers also sell the juice of deeply pigmented blood oranges, but charge a premium price for it. Tantalize your taste buds and make sure you try the refreshing orange juice while there. 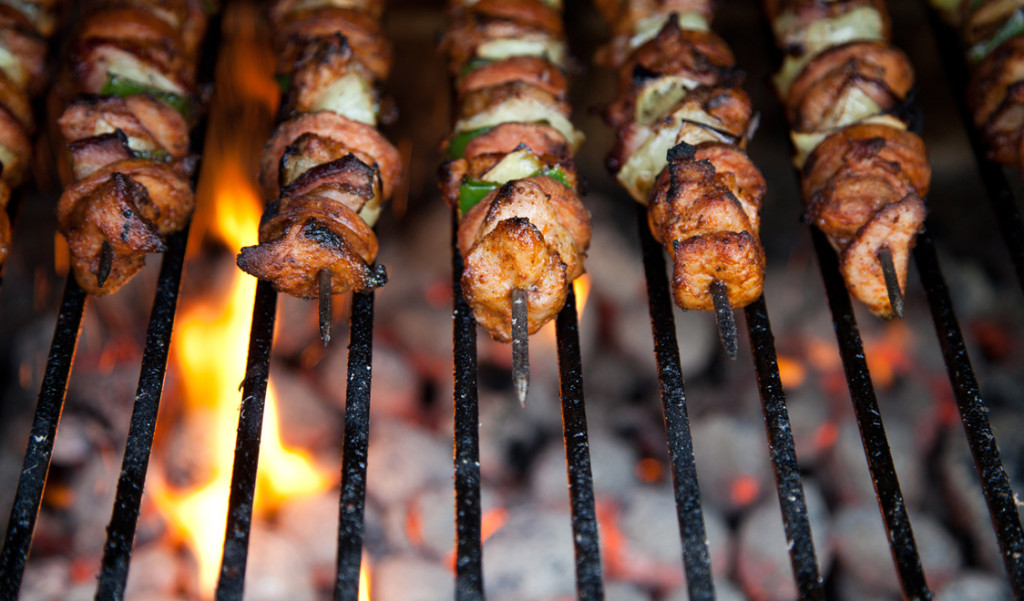 Marrakesh is home to some of the best street eats. Photo by foodtravelbliss.com

Marrakesh has some of the most versatile and delicious street foods on offer. Every evening there is a feast in Djemaa el Fna square where people join a queue to be served the latest Moroccan street food from grills and steaming cauldrons.

Try M’semmen, similar to a savoury roti or pancake these are cooked on a hot plate in generous amounts of oil and eaten plain or with butter, sugar, jam or honey for breakfast. In the evening they are often served up alongside soup. Experiment with your fillings and enjoy this delicious Moroccan dish. If you’re game enough, grab a bowl of snails. Eat them while they’re piping hot and don’t focus too much on the slimy creature that flops about as you pull it from its shell!