18 of the most beautiful caves in the world

Over the last few decades caves have become a hot spot for adventure among travellers. Newly discovered caves caused from sinkhole collapse have attracted visitors from around the world. Our human instinct to explore has led us to some of the most incredible caverns that have their own eco-systems and even giant bodies of water that are scientifically considered lakes. Grab your flashlight and skull cap as we explore 18 of the most beautiful caves in the world.

Most Beautiful Caves in the World: Carlsbad Cave 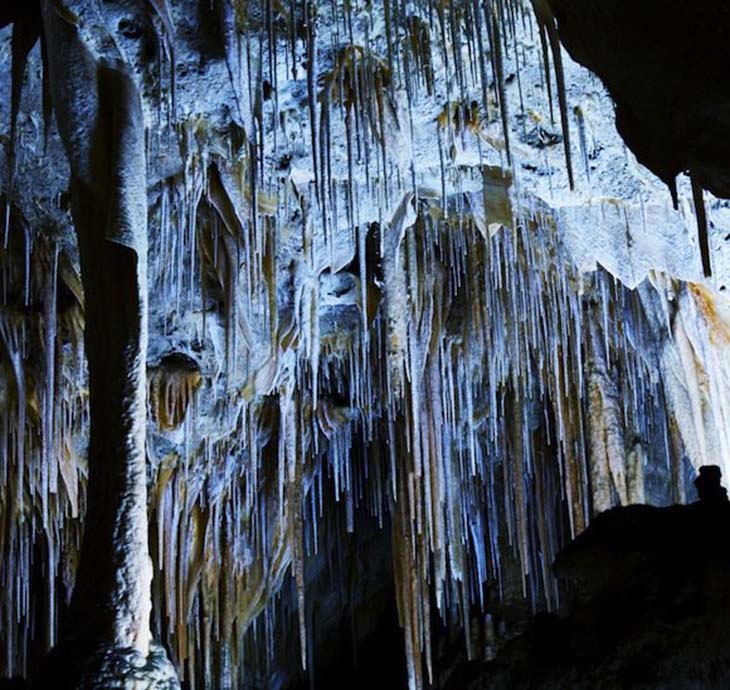 The Carlsbad Cavern holds one of the largest limestone chambers in the world. Photo from topDreamer

The Carlsbad Cavern is located 103 miles South of Roswell in New Mexico, a trip well worth the one and a half hour drive. The immense natural limestone cavern is almost 4,000 feet long, making it the fifth largest cavern in North America and the twenty-eighth largest in the world.

The Cave of the Crystals 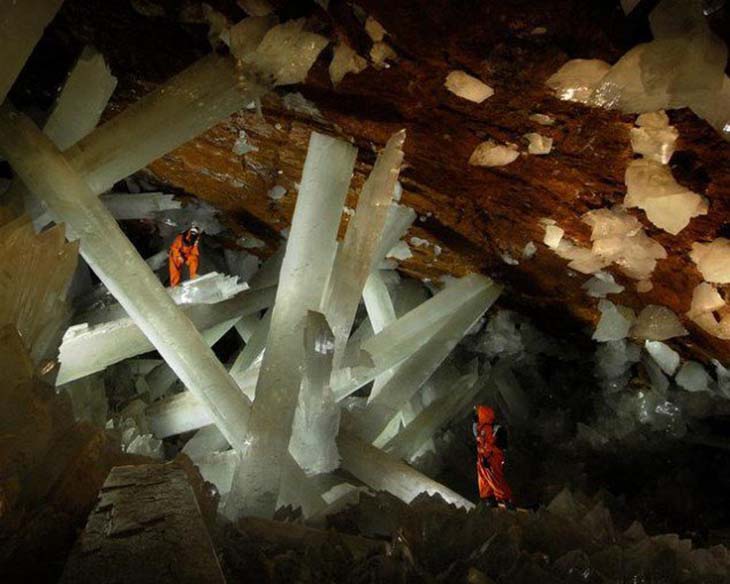 The Cave of the Crystals holds some of the largest crystals ever found. Photo by topDreamer

The Cave of the Crystals in Mexico houses some of the largest selenite crystals ever found. Unfortunately due to the extreme heat within the cave it is impossible for anyone but scientists working in the area to gain access.

The Cave of Swallows 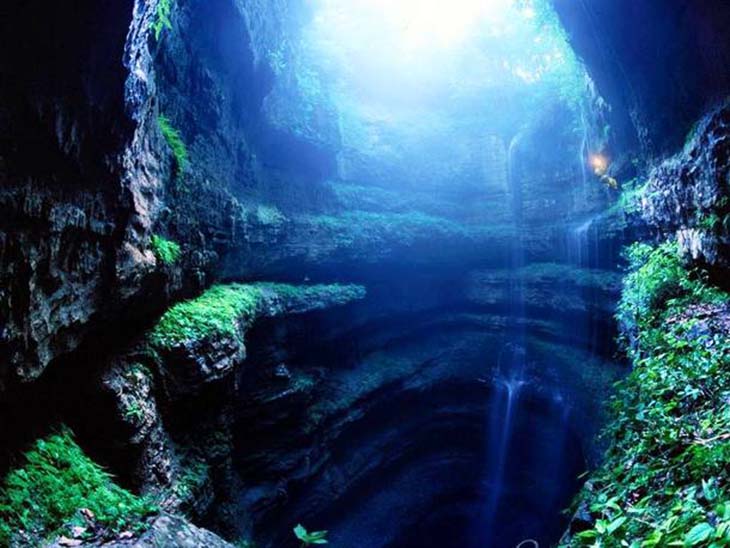 The Cave of Swallows is a very popular extreme tourist detination. Photo by topDreamer

The aptly named Cave of Swallows is a massive ‘open air pit cave,’ which really just means, don’t fall in. The floor of the cave is a 333 meter free-fall drop and is popular with extreme adventure tourists. There is a three hour drive from Tampico to reach the destination, as there is no public transport to the area. 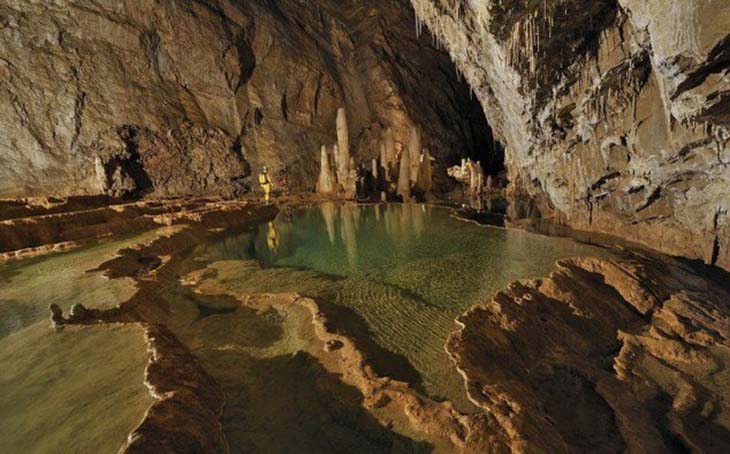 The Chorance Cave in France is a massive water cut cave. Photo by topDreamer

The Chorance Cave in France is a large water cut cave which contains numerous mineral deposits shaped as if stalactites. The cave still contains water which slowly continues to cut through the rock walls. You can get to the cave either by car on Motorway A49 or by taking the hiking trail from Chorance village. 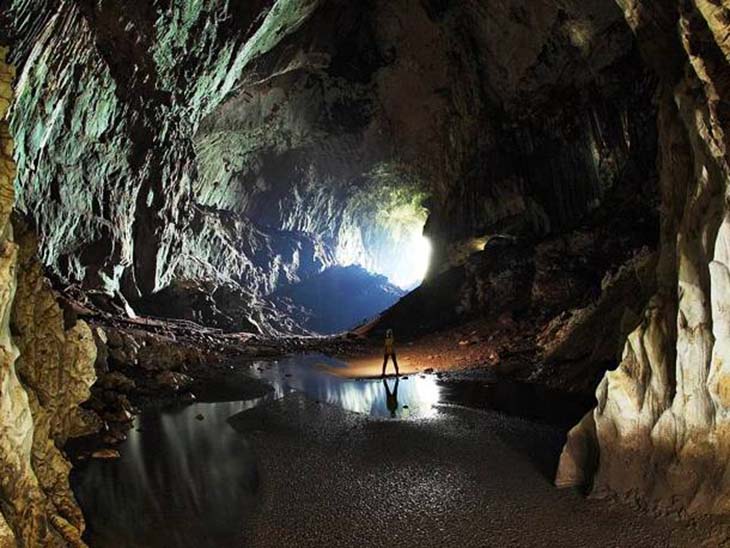 The Deer Cave in Borneo is a show cave, meaning that it is accessible to tourists for a small fee. There are numerous options to get to the cave, the easiest being to make a 3 kilometre hike over a boardwalk from Mulu, which takes you through other natural phenomenon such as limestone outcrops and a swamp. 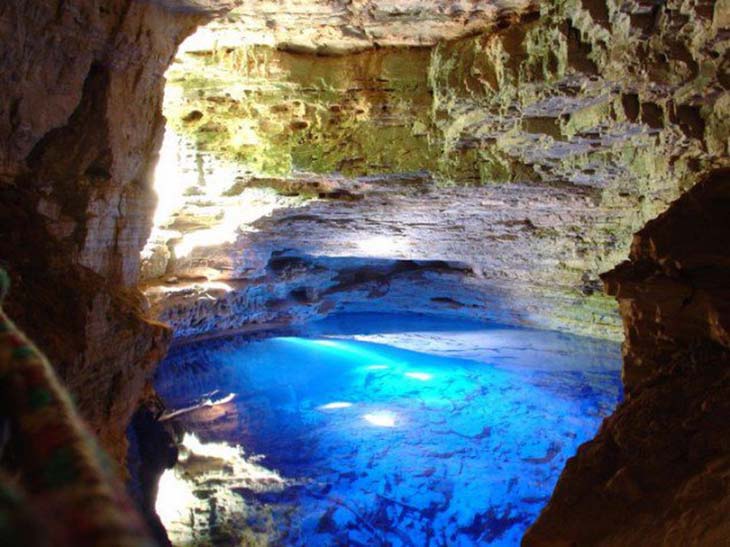 The Enchanted Well, the water is so blue as sunlight reacts with minerals in the water. Photo by topDreamer

The Enchanted Well is located approximately 500 kilometres west of Salvador in South America. The cave is within the Chapada Diamantina National Park, and holds one of the bluest bodies of water in the world. This well is inaccessible to tourists due to the fragile ecosystem within, however the Blue Well within the same cave is just as spectacular. 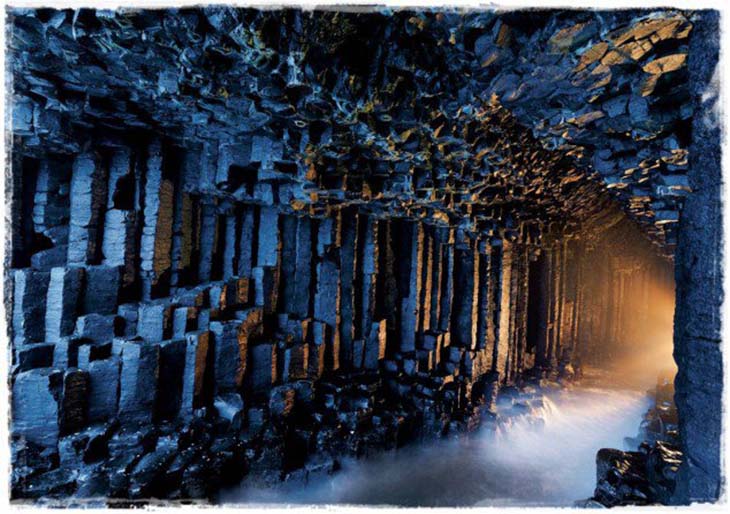 Fingals cave was formed by lava flow which fractured upon cooling. Photo by topDreamer

This incredible sea cave is located in the Inner Hebrides of Scotland and is part of a National Nature Reserve. The cave was formed as lava flow solidified and then fractured, and was then further eroded by water leaving the area we now see. You can get to the cave by boat, organised by staffatrips. 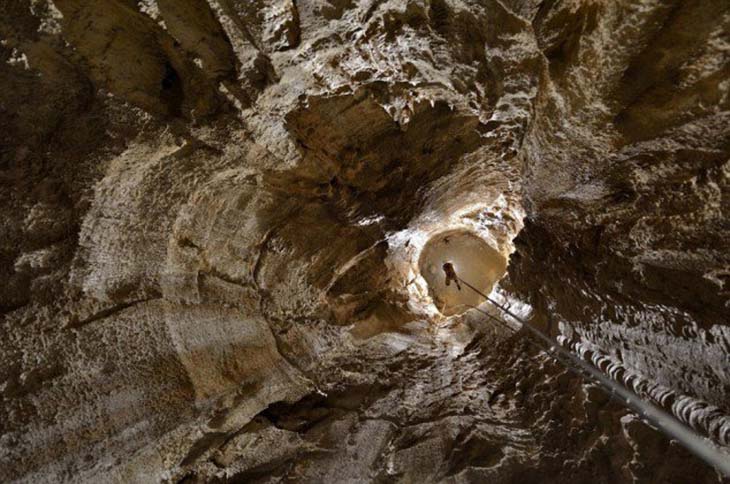 Similar to the Cave of Swallows, this incredible cave can be descended to a depth of almost 4000 feet. The cave is ranked 28th in terms of the deepest caves in the world. Unlike the Cave of Swallows the descent is very difficult and dangerous, with six fatalities in recent years, almost entirely due to drowning. Unless you are a very experienced climber it is not recommended you attempt to descend into the cave. 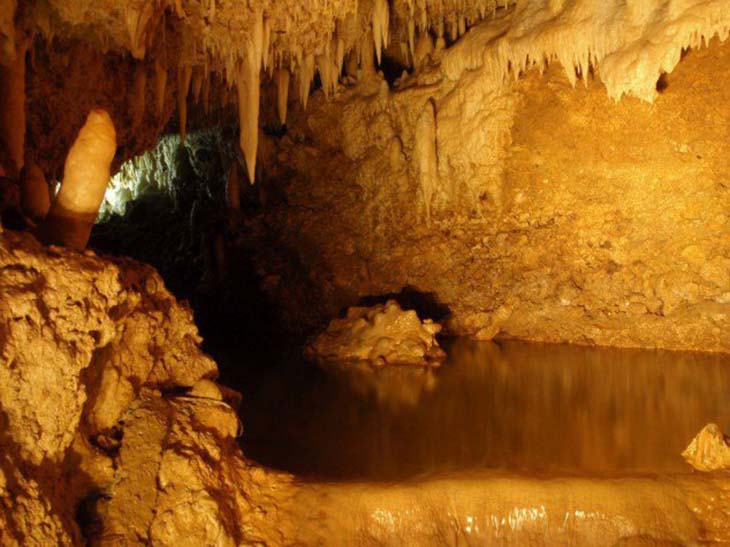 This cave in Barbados is home to incredibly beautiful crystallised limestone caverns, crystal clear water and numerous stalagmite formations. To gain access to the cave you can take a subterranean tramway or walk through the caves on a guided tour. The cave is located in the middle of Barbados, a trip from any area on the island would only take around an hour. 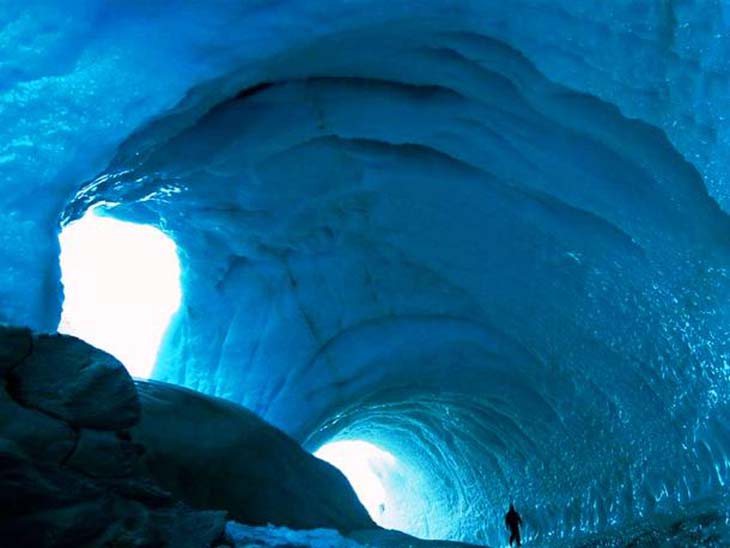 The Ice cave of Langjokull glacier are both natural and man made. Photo by topDreamer

This ice caves of Langjokull glacier (Iceland) are a combination of natural and manmade tunnels which snake through the area. The tunnels have incredible natural beauty, as the deeper you travel the bluer the walls of the cave get. The caves open in May 2015 and will be open until October of 2015. Due to seasonality these opening times will continue. 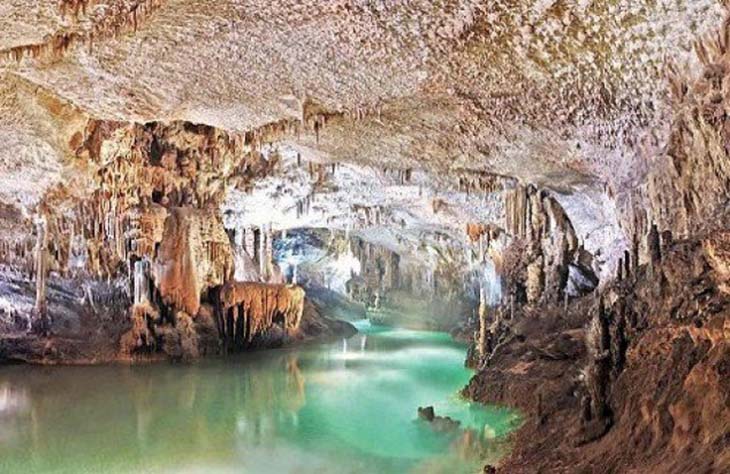 This cave system is the longest in the Middle East. Photo by topDreamer

This cave in Lebanon is the longest in the Middle East, consisting of two separate, but interconnected, limestone caves. This cave featured as a finalist in the New 7 Wonders of Nature, and is widely considered to have some of the most amazing agglomerations of stalactites and stalagmites. 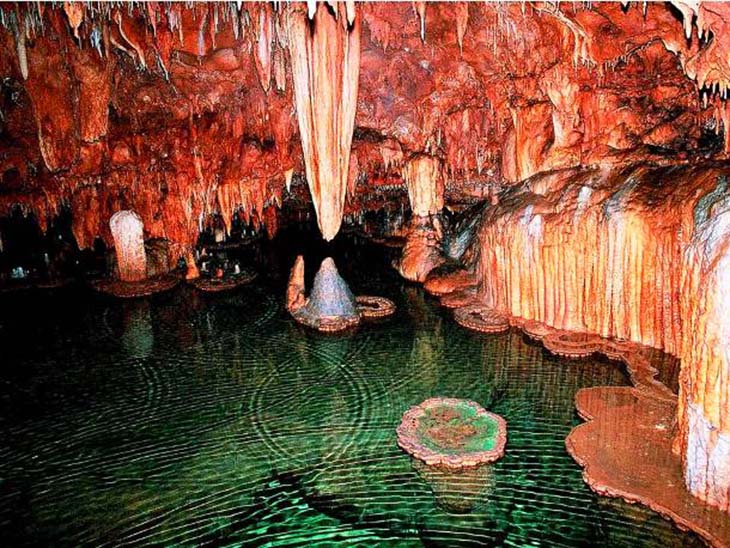 This cave system in Missouri is a beautiful series of formations which make up a large area, flooded by the Meramec River. The cave contains many stalagmites, stalactites and lilypad formations. The cave is accessible to tourists and can be travelled to by car from St. Louis, around a 50km trip. 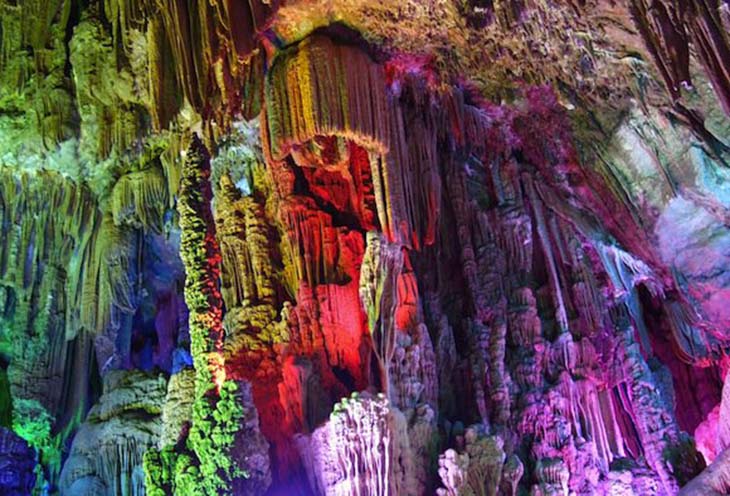 The Reed Flute Cave in China is approximately five kilometres northwest of Guilin. Inside this water-eroded cave is an incredible combination of stone pillars and rock formations created by the deposition of carbonate. The cave got its name from reeds which grow outside the cave and used to make flutes. 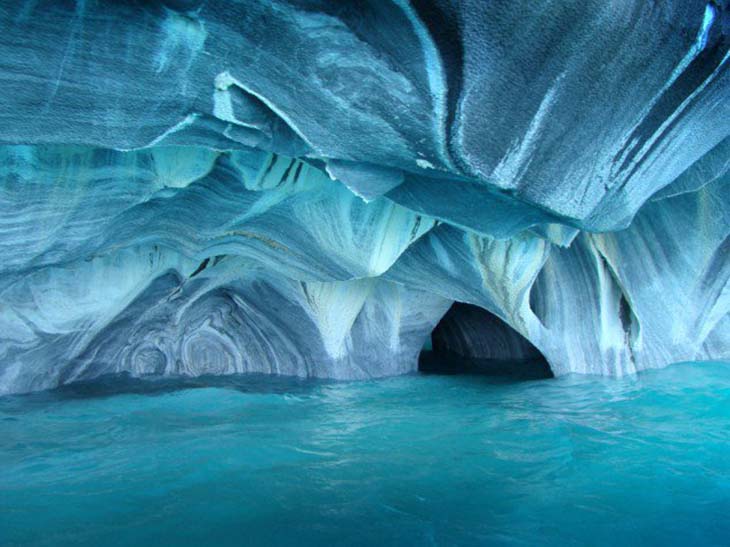 The Tranquilo Caves in Rio have been water eroded into the limestone peninsula. Photo from topDreamer

The Tranquilo Caves in Rio, Brazil are another water eroded series of caves, which are cut from the limestone peninsula. These series of caves are accessible by boat through a guided tour, which allows you to view the incredible interior.

The Sarawak Chamber is the biggest in the world. Photo by topDreamer

The largest known cave chamber in the world, the Sarawak Chamber in Malaysia is recognised by UNESCO as a World Heritage Site. The cave is home to an impressive collection of natural limestone spikes called the Pinnacles, the main chamber being capable of accommodating 40 Boeing 747’s. The area can only be accessed if you have significant experience in caving. 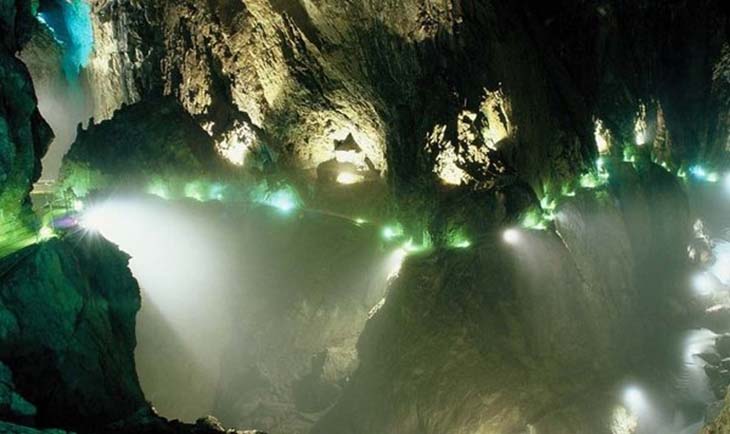 The Skocjan Caves are incredibly important to the scientific community. Photo by topDreamer

The Skocjan Caves in Slovenia are listed under UNESCO as one of the most scientifically significant caves in the world. The caves are one of the largest known underground canyons in the world and contain a special ecosystem, formed by the massive river which flows through it.

The caves are covered in Gypsum, a crystal which lights up in the dark. Photo by topDreamer

These unbelievable caves in the Ukraine are covered in gypsum crystals which light up in the darkness, a rare occurrence in any cave world wide. The caves are not large, consisting almost entirely of very narrow passages which took one photographer three hours to crawl through. It is not readily accessible to tourists. 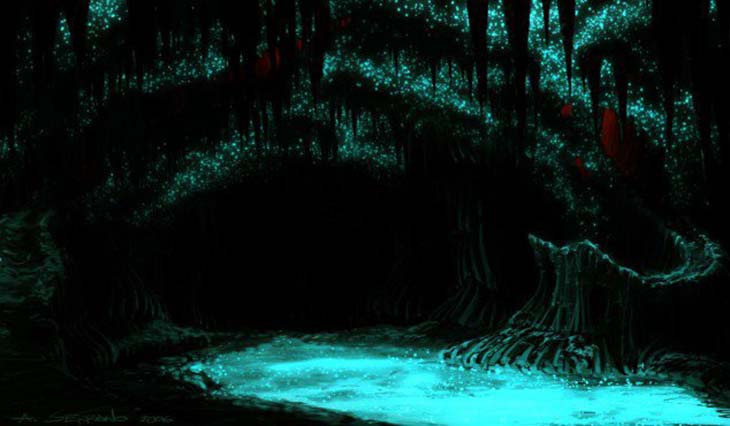 The Glow-worm Caves in Waitomo, New Zealand are home to one of the largest populations of glow worm, which light up the walls and the floor of the cave, creating an eerie blue light. The caves are accessible to tourists all year round, you can get there easily by car from Hamilton, or if you want a road trip you can head about 150km South from Auckland.