A guide to traveling in Petra, Jordan

On the slopes of Mount Hor in the south of the Hashemite Kingdom of Jordan, you’ll find the breathtaking stone city of Petra. One of the seven man-made wonders of the world, and a UNESCO World Heritage site. The Rose City lies in a valley running from the Dead Sea to the Gulf of Aqaba. UNESCO has even described Petra as “one of the most precious cultural properties of man’s cultural heritage”. To help you get there, we’ve put together a guide to traveling in Petra, Jordan. 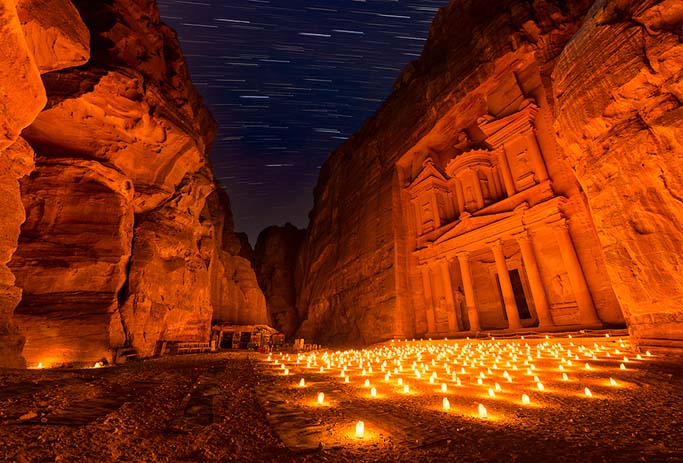 Certainly earning its place on countless bucket lists, the first thing you will notice about this incredible city carved into the stone surrounding, is its size; simply inconceivable, even to those who have traveled to the enormous site. The city itself spans at least 60 square kilometres through canyons, up mountains, and along river beds, with many of its ruins sized for giants.

The city itself could sustain a modern population of at least 100,000 people. However, before you pack your bags and jump on the next flight to Jordan, it’s important to know a few things about Petra, including its history, so that you get the full impact of this amazing architectural feat. Then of course, some tips about traveling to Petra, including the best places to stay, an insider’s opinion on the best course of action once you’re there, and many other useful tips. 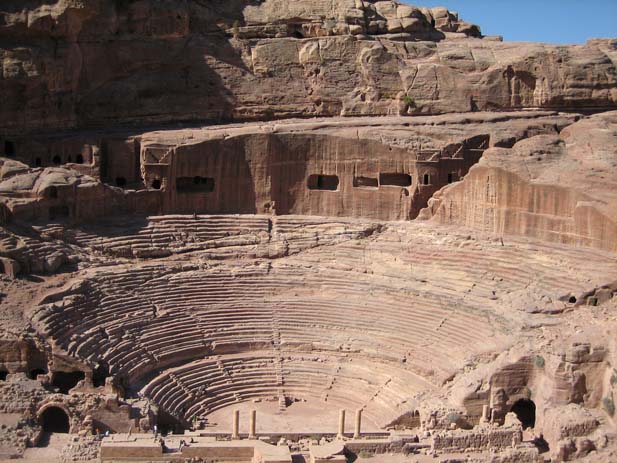 Construction on the city of Petra was said to have started around 800 BC, taking hundreds of years to complete. In the 6th century BC it became the capital of the Nabataean Kingdom, but was then absorbed into the Roman Empire in AD 106. The Romans then continued to expand it. The impressive city became an important centre for trade and commerce, with trade routes that linked China, India and southern Arabia with Egypt, Syria, Greece, and Rome. The city flourished until a devastating earthquake destroyed many buildings around AD 663.

Many years later, around 1189, Petra was abandoned after Saladin’s conquest of the Middle East. The memory of Petra was then lost to the West, until it was discovered by Swiss explorer Johann Ludwig Burckhardt in 1812. The discovery sparked many explorers and historians to further explore the ancient city, but it wasn’t until 1929 when the first major excavations were undertaken. It has since become Jordan’s largest tourist attraction, known as a city half as old as time. 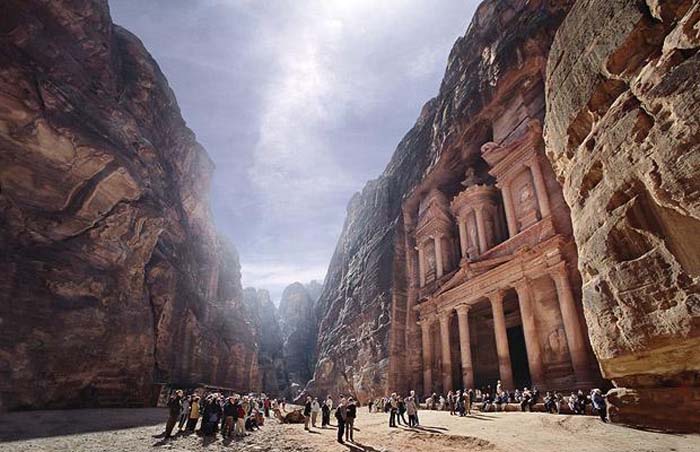 Many airlines fly directly to Jordan from Australia, which will put you in Jordan’s capital, Amman. From here, there are several methods of travel to get to Petra.

Bus: Alpha Daily Tours is a popular choice to travel to Petra, with a package that includes entrance fees, horse ride, and an English speaking guide. However, if it’s an authentic Jordanian experience you’re after, there are a number of local buses that travel to and from Petra daily. But be ready for loud music, singing and dancing if you choose to travel like a local.

Taxi: A taxi from Amman to Petra (approximately a three hour journey) will cost you about 50 Jordanian dinars (about 80 AUD). This price will vary depending on your driver, so be sure to negotiate a price beforehand.

Car: Renting a car and traveling to Petra from Amman is highly recommended. What better way to travel than with your friends or family along this beautiful scenic route. The benefit of renting a car is that you decide when you leave, how long you stay there, where you stop along the way, plus you have your own method of transport if you decide to stay more than one day. 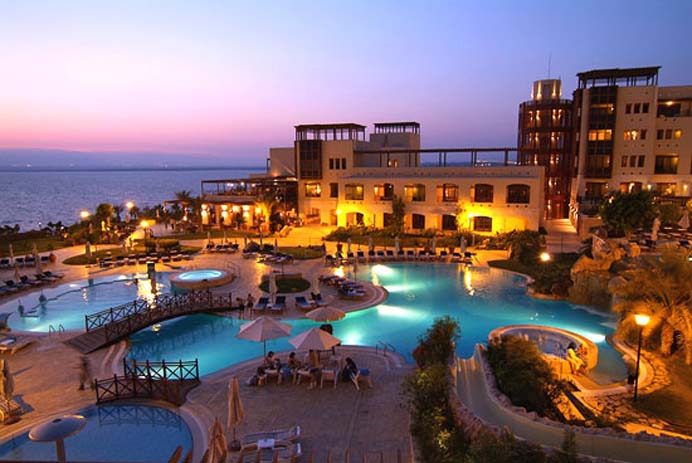 The town of Wadi Musa, just outside the site of Petra, has an extensive range of hotels to choose from. These hotels range from budget to 5 star, and many are located very close to the entrance to Petra.

If it’s 5 star accommodation you’re looking for, here are a few to take a look at:

For those who have a tighter budget, there’s still a huge range of great hotels for a little less. Here are a few suggestions, but there are plenty to choose from: 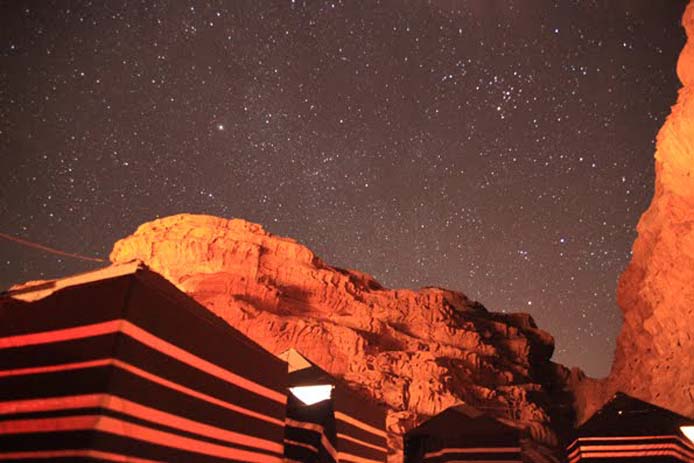 Camping under the stars in Wadi Rum, Jordan. Photo by Sophie Mayer

The above hotels listed are all great for a place to relax and unwind. However, for the ultimate experience, you can’t go past camping under the stars at Wadi Rum. Approximately an hour and a half from Petra, (and only 5 JD for a bus), you can spend the night camping under the stars at a traditional Bedouin camp ground. Watch the famous red sunset and enjoy some authentic Arabic food, all while relaxing by the fire and enjoying the Bedouin music. Wadi Rum is certainly worth the trip, even if you just spend one of your nights there.

Before You Enter the Site 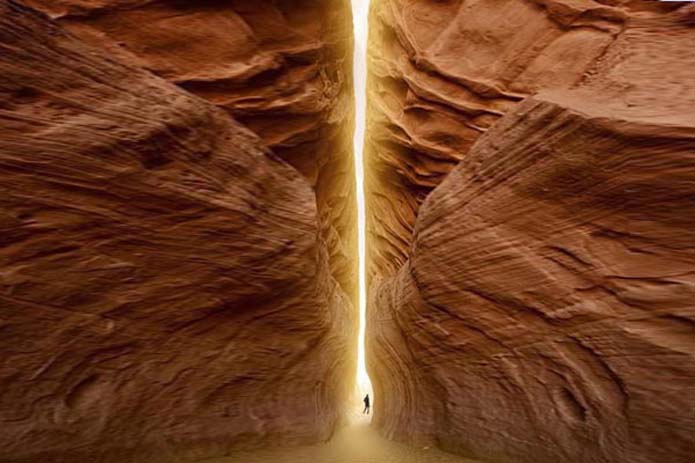 Before you arrive at Petra, there are a few things you should take note of whether you travel frequently or not. These tips all come from experience, and should be considered before you plan your trip.

What To See and Do in Petra

Petra has a number of individual sites to see, not just the huge treasury it is most well-known for. So here are some of the best things to see while you’re in Petra, and the best ways to see them. 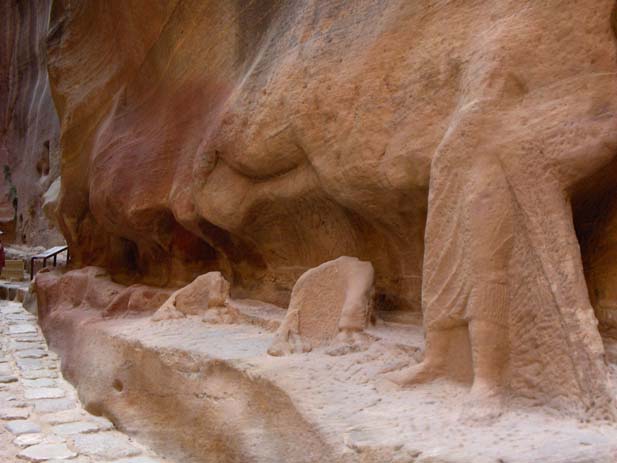 The 2km long Siq in Petra, Jordan. Photo by wikimedia

This is the long, winding sandstone canyon that leads up to the main treasury. Its walls are 80m high, creating a spine-chilling shadow as you wander over the red sands. At 2km long however, this is best experienced on horse-back, allowing you to go slow enough to take it all in.

The heart of Petra can be viewed bit by bit upon exiting the Siq. The Treasury is truly an impressive sight, with its massive façade measuring 30m in width and 43m in height – that’s roughly the size of a 12 story building. Carved into the rock-face, it has stood for thousands of years, representing the engineering genius of these ancient people.

Just past the main treasury is another long street, lined with the facades of various tombs used by less wealthy families of the time.

Originally built by the Nabataeans but later enlarged by the Romans, the Roman Theatre seats an impressive 7000 people, and is still used for occasional performances. 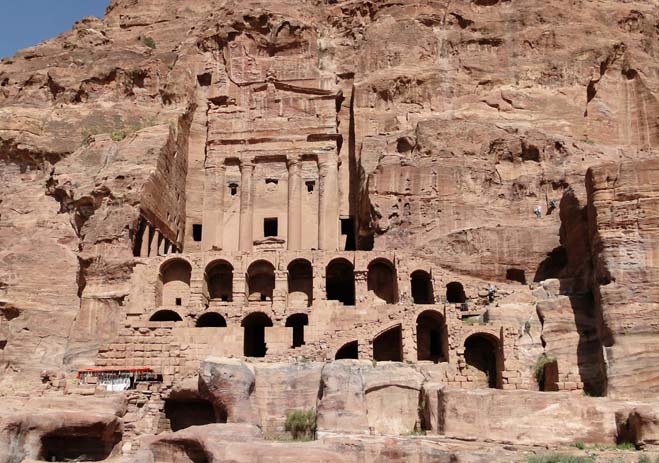 A short walk from the Roman Theatre are the Royal Tombs. Despite the name, it is unclear who these tombs were originally built for. However, they are quite grand in scale compared to the others in the area.

Not to be taken lightly, the largest carved monument in Petra is only reached by ascending more than 800 steps. It’s not an easy trek, but definitely worth it.

Camels at the main treasury in Petra, Jordan. Photo by Getty Images

After a long day of exploring the massive city of Petra, you may want to get off your feet. There are many locals around offering cheap alternatives to walking. A camel ride is perfect for the long walk back to the main entrance of Petra.

Get Off the Main Trail 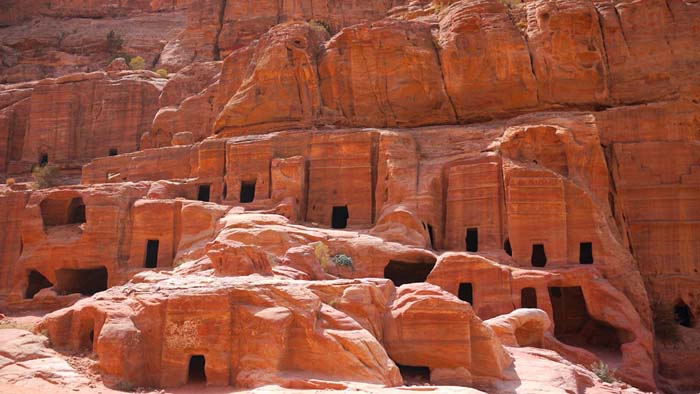 Caves off the main trail at Petra, Jordan. Photo by Nic Freeman

While there are many amazing things to see on the main trail, there’s nothing like getting off the beaten track and exploring the deserted ruins of Petra. Not only will you fully experience the sheer size of Petra without the noisy tourists, but you can see the main treasury from a whole different perspective by looking down on it, instead of up at it. It’s recommended that you take a guide with you for these treks; however there are small rock formations that you can follow instead. 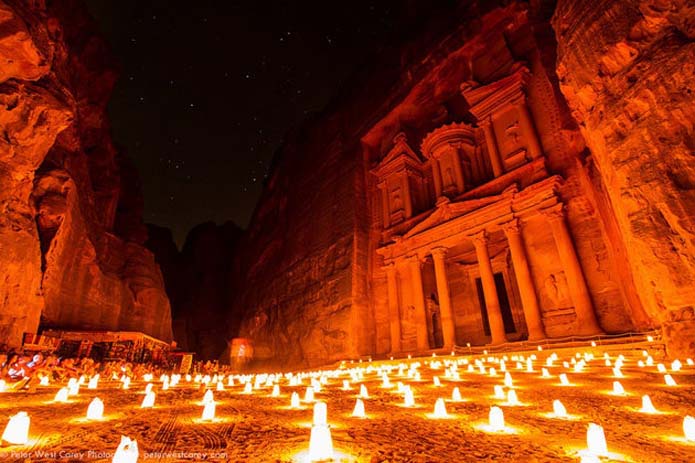 Experiencing Petra by the light of 1,800 candles is an out-of-this-world experience. Follow the candles through the Siq to the main treasury where you can enjoy a hot tea and the haunting music of the Bedouins.

So while I could sit here and tell you more about the never-ending wonders of Petra all day, nothing could really prepare you for this amazing place. Like the Pyramids of Giza or the Great Wall of China, Petra has to be seen to be believed.