A short guide on what to do in Santorini 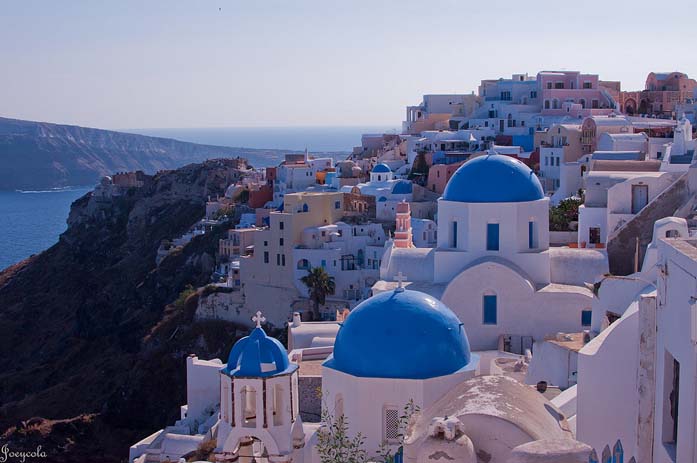 Santorini is famous for its blue and white buildings that scatter the hillside. Photo by Mints Time, flickr

With mountains of white and blue, the Greek islands have more to offer than you can poke a stick at. Located southeast of Greece’s mainland, Santorini was built among inside of a dead volcano. Perched high up on a hill, overlooking the Caldera, Santorini has been carefully restored aimed at attracting tourists.

The place is filled with cafes, restaurants, boutique shopping areas, beaches, lagoons and boat harbors by the dozen. The main city of Santorini is Fira, however, views of the sunset and cliffs are seen from the city of Oia. Each of the cities throughout Santorini are accessible and each has something special to offer. Below is a short guide on what to do in Santorini to help you on your way.

How to get to Santorini

Fira is the main city of Santorini and is located high up in the mountains. Photo by Emma_L_M, flickr

The faster method of travelling to Santorini is by plane from Athens. The airport in Santorini is just north of the town of Kamari, and there are regular flights from Athens daily. The flight between Athens and Kamari, Santorini takes an estimated time of only 30 minutes. After you have arrived at the airport, there are buses available travelling into Fira and from there you can change to buses that travel into other towns. If you prefer to do a more “sight-seeing” alternative, you can travel by sea.

Ferries leave from Piraeus, the port at Athens, and arrive in Athinios, the port city of Santorini. During high season there is a ferry that operates between Crete and Athinios. The trip between Piraeus and Athinios takes roughly 4.5 hours on a high speed ferry, and it’s best to ensure that you arrive well before the ferry departs to ensure your spot. From the ferry docks you can take a taxi to your destination further inland, or you can arrange with hostels for pick up and drop off services. 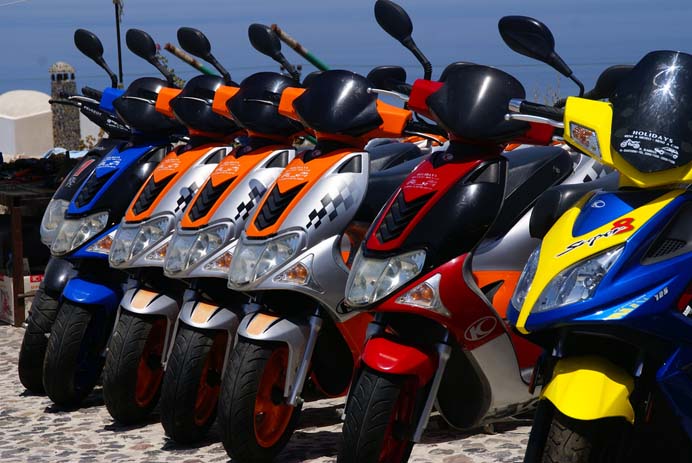 Scooters can be hired to travel around the island from a number of companies and street sellers. Photo by palindrome6996, flickr

While taxis are fairly common in Santorini, they often cannot be relied on as a means of transport, with most of them being expensive. Cars can be rented from Santorini Car Hire for around $61 USD per day. However, an international driving license is required. Otherwise there is a public bus service, just keep in mind that buses often skip stops.

Scooters and 4-wheels are also common amongst tourists on Santorini. Each can be hired through companies, ranging from roughly 25-40 USD per day. Keep in mind that the majority of riders are tourists, and therefore the road rules are close to none and roads are often unsafe. Helmets and protective clothing is recommended for riders. It is also required that you hold a drivers license. 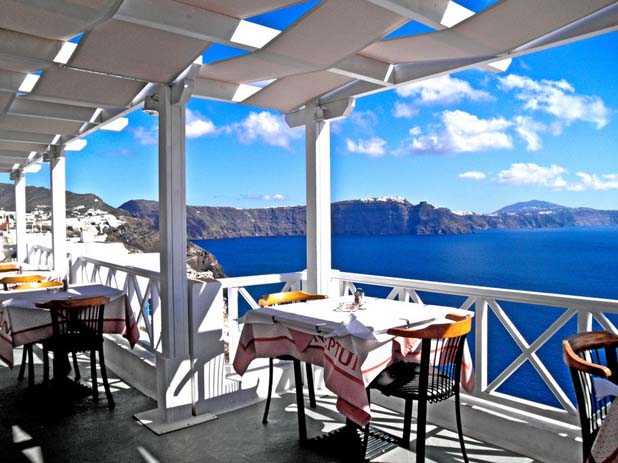 Dining out in Santorini. Photo by the o0023, flickr

Santorini is famous for its white eggplant, a delicacy served often with other Santorini specials including capers, tomatoes, and served in traditional rolled vine leaves. Fresh fish is popular, especially with establishments closer to the sea. Keep in mind that if you are in a restaurant or café with views of the sunset or ocean, you will be charged more! There is often a “sitting fee”, and places that are more commercial will charge more for food to customers with better views. You should attempt at finding smaller, family run restaurants and cafes to avoid the extra charges, and to get more bang for your buck. 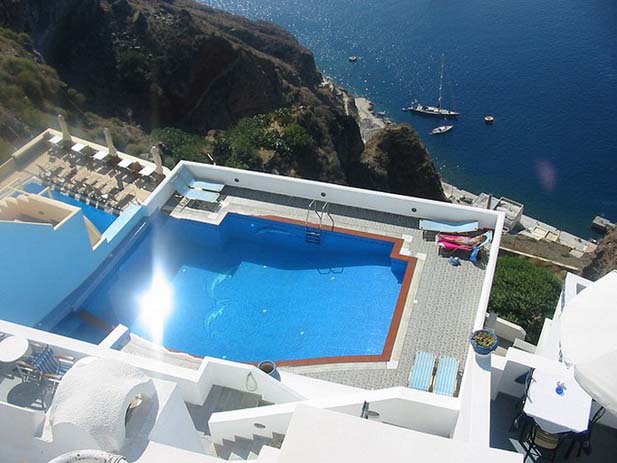 There are two sides to Santorini; the western and the eastern. Both differ in the accommodation and sights they have to offer. The western side hosts the larger, fancier resorts and hotels and is where the majority of couples and honeymooners stay. The establishments on the western side have the nicest views of Santorini and the sunset, however, because of their location on the cliff, many of them are built with stairs to climb – and therefore most do not offer services for children under teenage years. Keep in mind that the western side is also more expensive than the eastern side.

The eastern side of Santorini attracts families and younger tourists, with hotels larger in size; with bigger rooms and bigger pools. The eastern side is more affordable, due to the fact that tourists are charged by rooms according to view. Don’t need a room with a view? You’ll be charged a lot less. Keep in mind that many restaurants and cafes have views – so you can save yourself money by booking a cheaper room and eating out somewhere nicer.

What to do and see 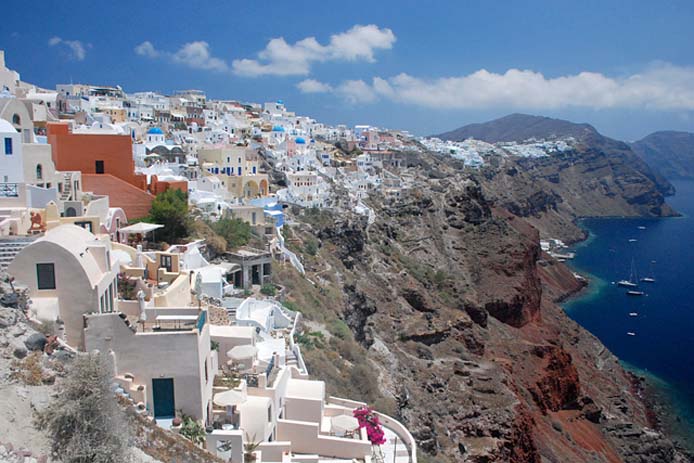 Santorini is built on top of a collapsed volcano called Calderas. Photo by wiki media

Santorini is famous for beaches. Red Beach is arguably the most famous beach in Santorini, with many tourists flocking there each year to sunbathe, swim and take photos of this luxurious spot. It’s important to wear closed in shoes when going to Red Beach, however, as the hike to the beach is particularly difficult if you are not wearing proper shoes. Vlychada beach is a nudist beach, the further left you go from the tourist strip. On the left, you are required to be clothed, and umbrellas can be hired, but to the right you venture into an area where you get comfortable in your own skin and that only! Agios Georgios is at the southern tip of Santorini, and this beach is the perfect spot to go if you want to avoid massive tourist crowds. It’s perfect for a quiet swim, some water sports and then a visit to a beach bar or café. Agios Georgios is also famous for its black sand. 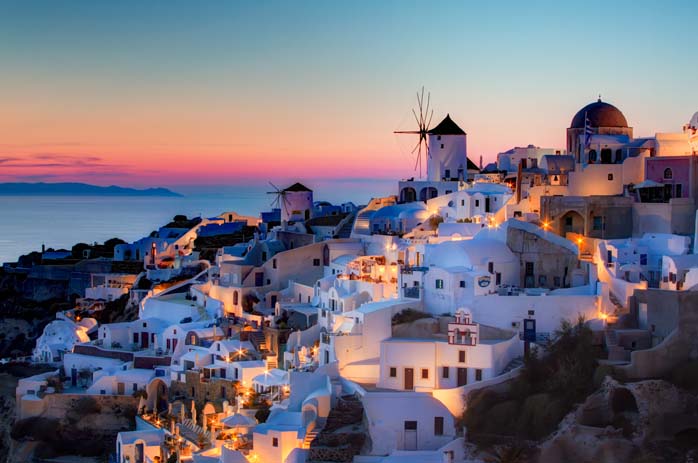 Night falls over Santorini adding even more magic to this stunning place. Photo by Vacation Advice

Be sure to catch a famous Santorini sunset. They are one of the world’s marvels – and what a dream it would be to see. Sit down for a coffee, a meal or walk along the streets in the cliffs to get the best view. Remember though: establishments charge more for the best view. Some of the best views are seen from the climb to the monastery, Ancient Thira. You start the climb from Perissa, and follow a zig-zag trail taking roughly an hour. From the top, you have outstanding views of the ocean, beaches and surrounding islands.