Six amazing places in nature that you should try and visit

Now and then we witness sights that take our breath away. From natural wonders like the glowing blue waters of the Maldives, to the accidentally man made fiery pit in Turkmenistan that has been burning constantly for the last 40 years. Here is a list of six strange sights from around the world that will cause you to do a double-take.

The glowing blue waters of the Maldives

In the Maldives, visitors can witness the phenomenal natural wonder of bio-luminescent phytoplankton, which at dusk can create blue beaches. The bioluminescent blue glow is created by millions of phytoplanktons in the ocean which contain luciferase, a chemical that glows in the dark when agitated – such as when a wave breaks on a beach. 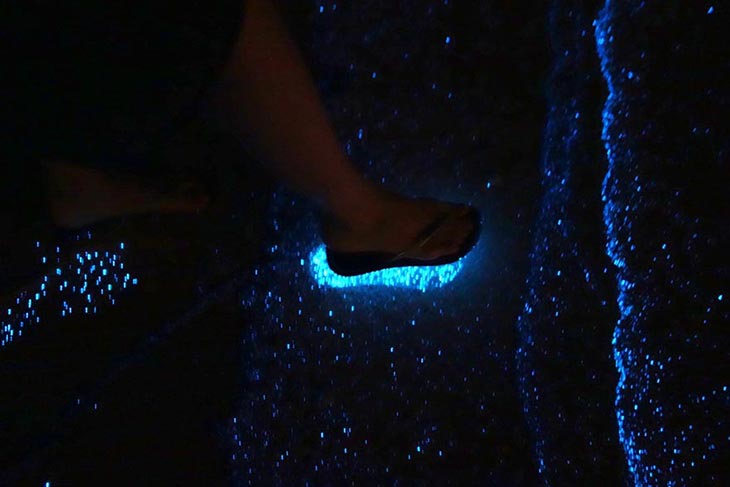 The bioluminescent phytoplankton in the Maldives that glow blue at night. Photo by boredpanda.com

The blue glowing beaches are best seen on moonless nights. Simply walk along the beach or enjoy a night time dip to swim through the glowing ocean of stars. Some Maldives resorts offer night dives where divers can swim through the glowing beam of light, but this amazing natural wonder doesn’t happen daily. Those who have been lucky enough to see the sea glow blue have described it as beautiful and enchanting. 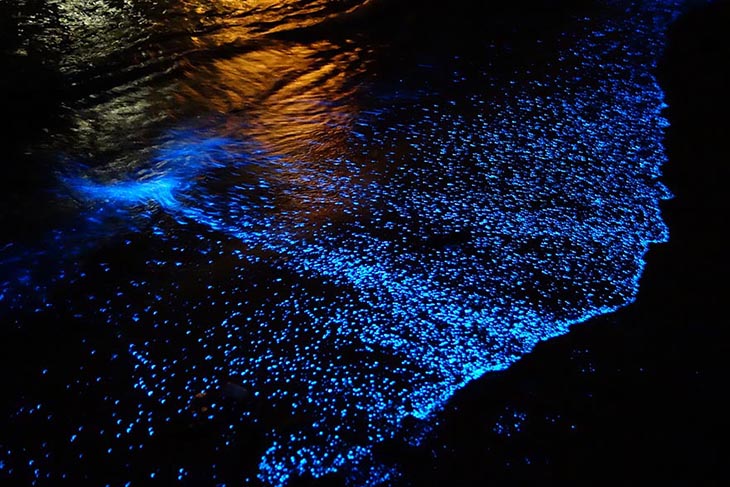 The Maldives bioluminescent phytoplankton on Rangali Island. Photo by boredpanda.com

Fly Geyser is a man-made geothermal geyser reaching around five feet high in Washoe County, Nevada. It sits on a seven-foot mound and was created accidentally when drilling took place in 1964 in an attempt to find sources of geothermal energy. 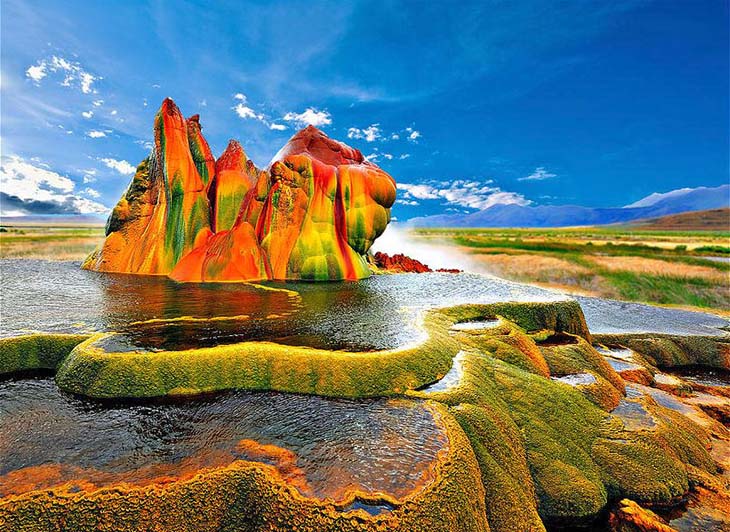 Although people are not entirely sure why the geyser occurred, it was most likely due to the well being left unplugged, leading to the accumulation of dissolved minerals which rose to the surface and created the mound on which the geyser sits. Plumes of hot water continuously spew up to five feet in the air, which fills the numerous surrounding terraces with pools of water. 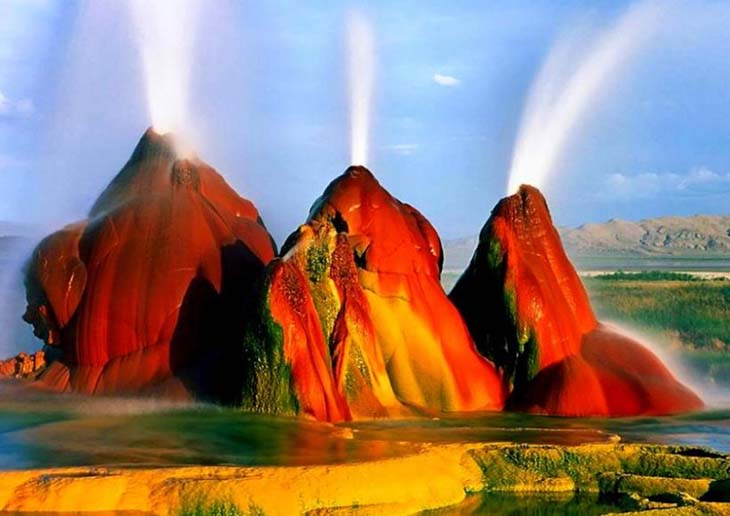 The man made Fly Geyser in Nevada. Photo by myfuturetrips.com

It is the brilliant green and red colouring caused by thermophilic algae which makes the geyser so remarkable. Nestled on a patch of private land in Nevada’s Black Rock Desert, the Fly Ranch Geyser is one of the state’s coolest attractions. Fly Geyser is located on the private Fly Ranch in Hualapai Flat, half a kilometre from State Route 34. The only access is a dirt road, but the geyser is large enough to be seen from the road.

Lake Retba lies north of the Cap Vert peninsula of Senegal, some 30km north-east of the capital Dakar in Northwest Africa. It is named for its pink waters caused by dunaliella salina algae, and is known for its high salt content, which is up to 40% in some areas.

Magenta coloured samphire bushes flourish in the white sand banks, and the sand dunes are terra-cotta-coloured to add to the lakes splendour. Like the Dead Sea the lake is sufficiently buoyant that enable people to float easily. Fish have adapted to the high salt content of the lake, having evolved ways to pump out extra salt and keep their water levels balanced, but the fish are considerably smaller than they would be if they lived in a normal environment – this is known as salt water fish dwarfism. 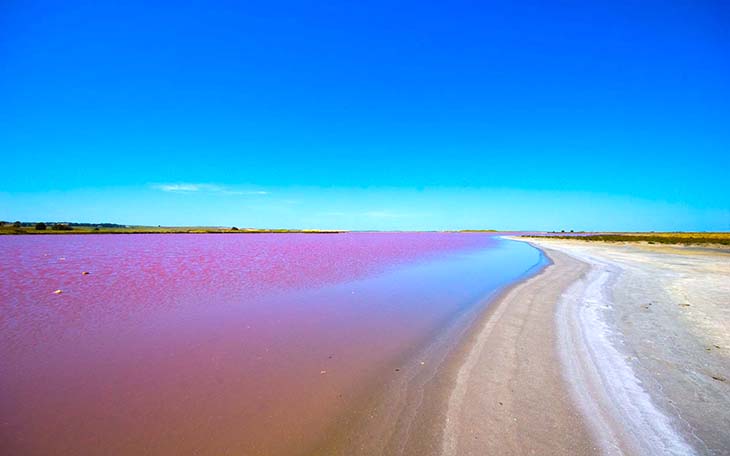 The Door to Hell, Turkmenistan

This giant hole in the Karakum Desert has been burning for over 40 years. Named by locals as ‘The Door to Hell,’ the crater in Turkmenistan was created in 1971 by Soviet geologists drilling at the site who then tapped into a cavern filled with natural gas. The ground underneath the rig collapsed and left a hole with a diameter of 70 metres. 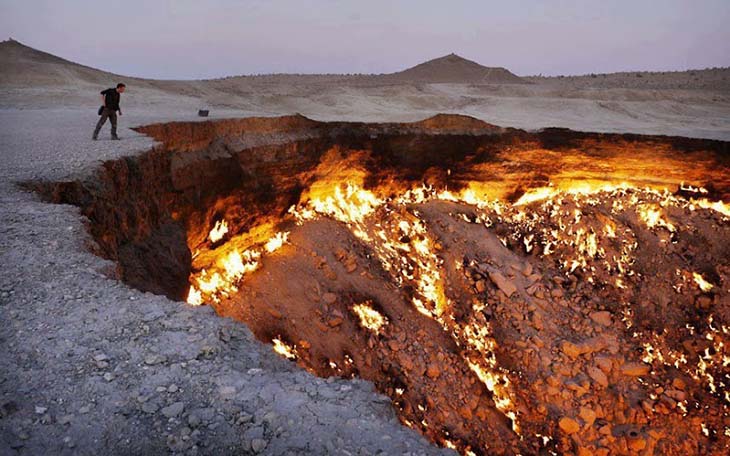 The Door to Hell, Turkmenistan. Photo by sometimesinteresting.com

The team was afraid the hole would release poisonous gases and harm the nearby town so they decided to burn it off. They hoped it would die out after a few days, but more than four decades later the crater is still ablaze.

Hundreds of tourists flock to visit the fiery pit in Turkmenistan in Central Asia each year, and the country’s government is now looking to turn it into a key destination for adventure tourists. Thrill seekers can stand right on the edge of the crate, which, despite the danger, is not fenced off and can reach temperatures of more than 50 degrees. The surrounding sandy soil can crumble away, so visitors are advised to be extremely cautious while visiting the pit of fire.

With its rolling hills, rocky peaks and multitude of colours, this site looks like no other place on earth. The spectacular lunar landscape can be found at the Zhangye Danxia Landform Geological Park in Gansu Province, China. Like one giant red, orange and yellow-hued paint spattered artwork, the park offers breathtaking views that blaze with colour.

The unusual colouration in the rocks is the result of red sandstone and mineral deposits being laid down over 24 million years ago. It is composed of precipitous cliffs, most of which are several hundred meters high. Standing in the plains and by riversides, all of these cliffs are smooth and sharp looking grand and magnificent, vigorous and virile. Even the low pinnacles look powerful.

Across the Danxia landform zone, a kaleidoscope of numerous red rocky outcrops resemble weird and wonderful shapes like castles, cones, towers, as well as humans, creatures, birds and beasts. They are as vivid and organized as the Millennium Castle and, especially with their peaks peeping through the mist and clouds, produce mirage-like scenery of fantastic mountains and pavilions. 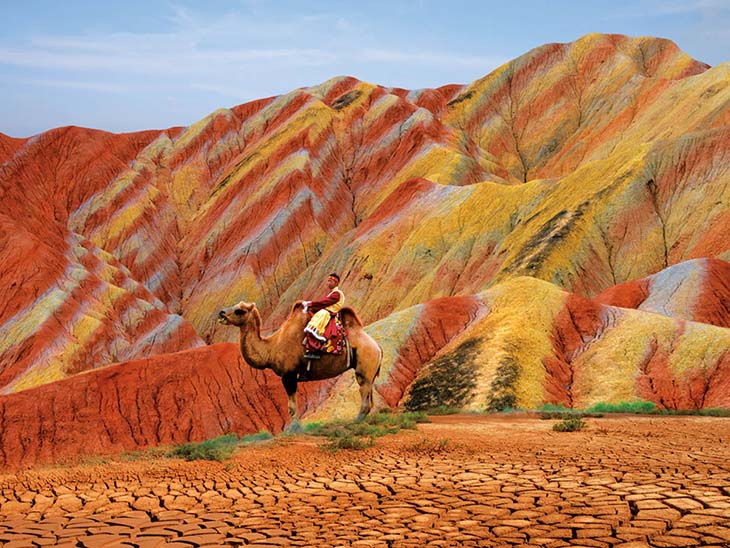 The incredible Zhangye Danxia Landform is a must see. Photo via wordsofpictures

Geologists believe that Danxia topography is formed as a result of movement in the earth’s crust. This makes the layers of rock appear in different colors, textures, shapes, sizes, and patterns. The combination of differences in density and erosion creates towering peaks, cave holes and stone halls. Experts say the landform is the result of red sandstone and other rocks undergoing metamorphic processes for millions of years, which makes this sight one worth seeing.

This grotto is one of the best known natural beauty spots on the Adriatic, and is a popular show cave because of the glowing blue light that appears at certain times of day. The natural entrance to the cave, located on its southern side, is said to resemble a vault on the ceiling of a grotto. It is through this submarine-like opening on the ceiling of the cave that sunlight enters creating an iridescent blue glowing effect all around the cave. 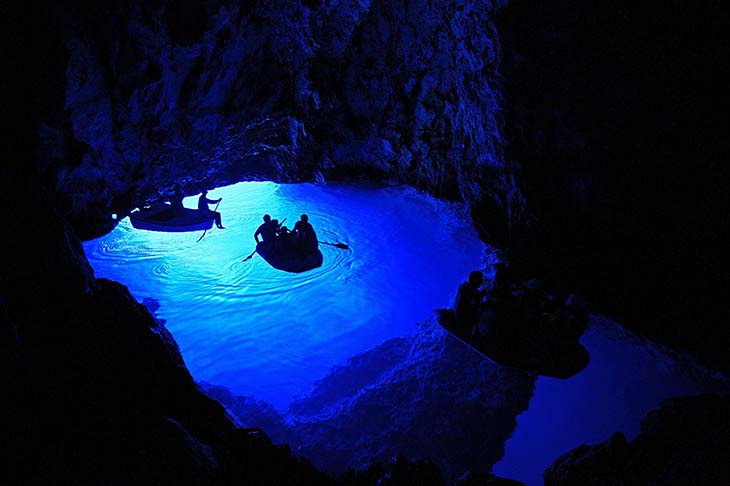 The beauiful blue cave in Croatia. Photo by blogcdn.com

The Blue Grotto or Blue Cave is a water-logged sea cave located in a small bay called Balun, on the east side of the island of Biševo and just over eight kilometers from Komiža in the Croatian Adriatic. It is situated in the central Dalmatian archipelago, 5 km south-west of the island of Vis.

The cave was formed by the action of the waves as sea water eroded the limestone rock of which the whole island of Biševo is composed. Depending on the season, the ideal moment to visit the cave is between 11am and noon. At this time of day the sunlight reflects through the water coming from the white floor of the cave which bathes the grotto in aquamarine light. 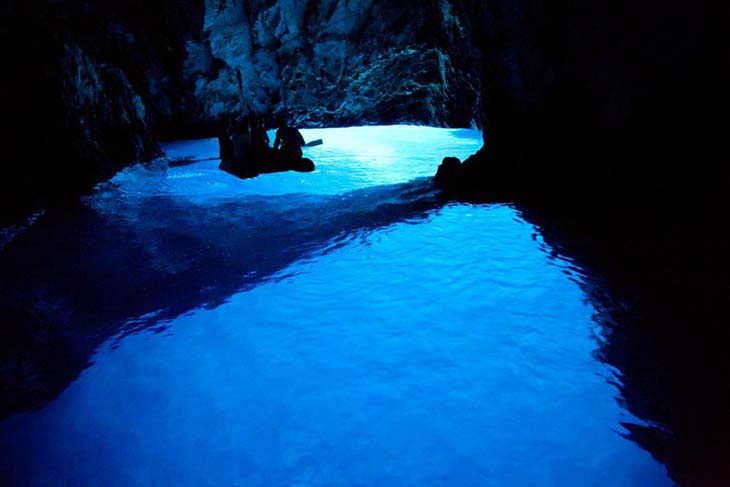 The cave receives more than 10,000 tourist visits every year, and tourist boats often include a visit to another similar cave on the island, the Zelena špilja, also known as The Green Grotto, which is bigger in size and appears to be of an emerald-green tone due to a similar effect.