5 of the best places for backpackers in India

Over the last decade, India has become one of the fastest growing tourism destinations in the world. It has great diversity both geographic, climatic and cultural, which makes it a nation unlike any other and one attracting all kinds of visitors. The fact that it is also cheap to eat, sleep and travel in makes India a perfect country for young backpackers venturing out to get a taste of the great unknown. 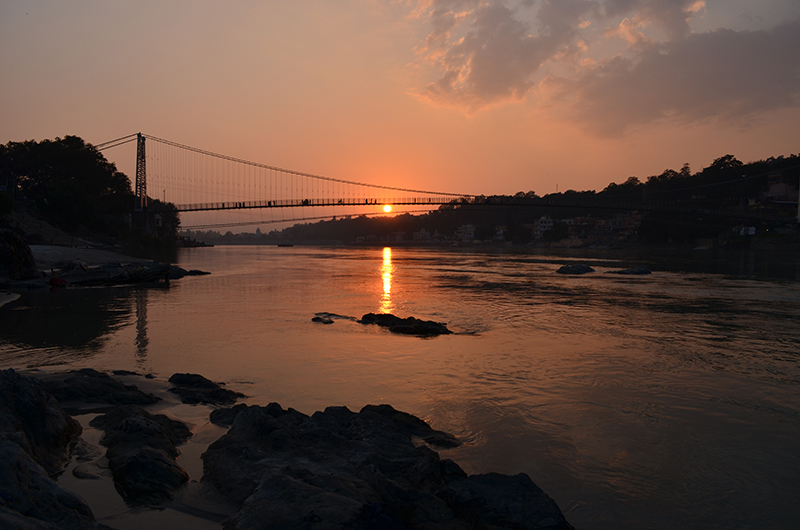 Sunset over Ram Jhula in Rishikesh. Photo by Liam Taylor

With so many backpackers now making their way to the subcontinent, it is not surprising particular locations have gained reputations as backpacker hives. In these places dreadlocks and bare feet are commonplace and certain guesthouses overflow during high season with musicians, artists, photographers and backpacks. Most importantly, they also offer unique experiences of India. 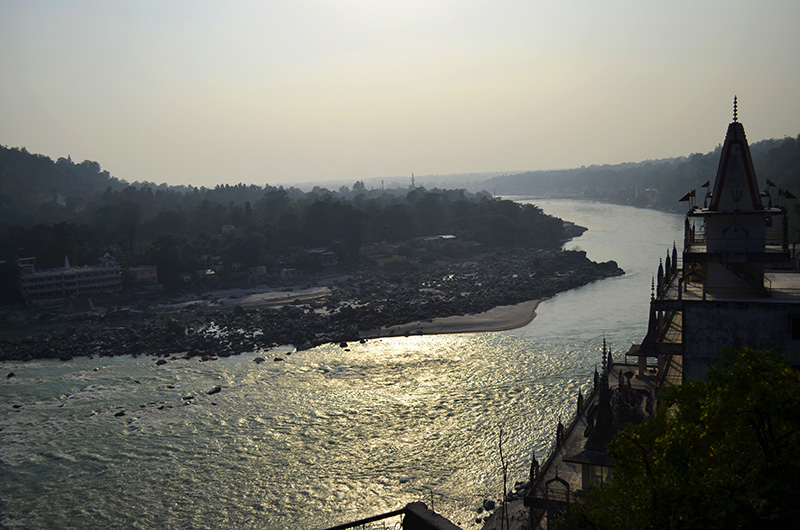 View of the Ganges from the Beatles Cafe in Rishikesh. Photo by Liam Taylor

Rishikesh became popular on the tourist scene during the late 1960’s when The Beatles visited the famed Maharishi Mahesh Yogi’s Ashram. Known as the yoga capital of the world, Rishikesh is split in half by the Ganges as it emerges from the foothills of the Himalayas. A dip in these holy waters allegedly brings one closer to Moksha (spiritual enlightenment) and this promise brings thousands of pilgrims from India and around the world. As a result, the town has become a hotspot for spiritual teaching, Ayurvedic medicine and meditation whilst taking on a tranquil vibe all of its own.

Ram Jhula and Lakshman Jhula, two suspension bridges connecting the two sides of the Ganges, create the enduring image of Rishikesh and it is here the bulk of the backpackers converge. There are some more upmarket options but the majority of guesthouses, restaurants and cafes here cater to the backpacker market. Little Buddha Café is a popular meeting point offering tasty local and foreign food options. After dinner cross the road to East West Café for a late night jam and an overflowing ice cream sundae.

How to get there: Rishikesh is just a short train, bus or flight from Delhi. If you take the train you will alight at Haridwar, the sister town, and can take a rickshaw or taxi to Rishikesh. 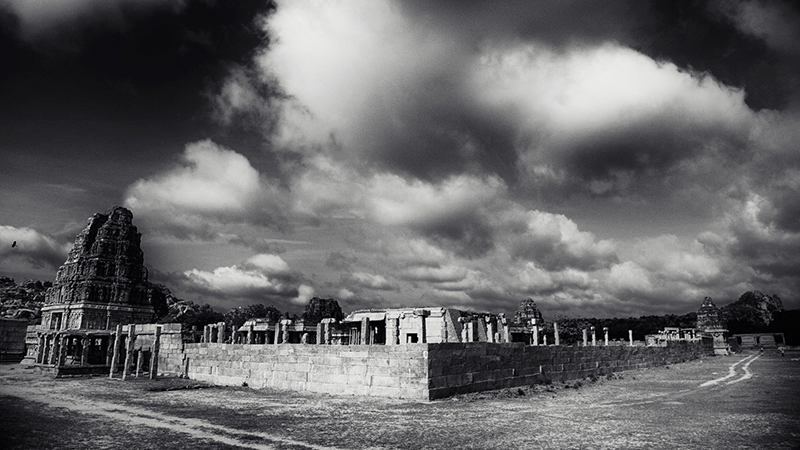 Hampi is a small village in Northern Karnataka with the most spectacular story to tell. Ruins of temples dating back hundreds of years can be found scattered across an unreal landscape of boulders, palm groves and banana plantations. A combination of volcanic activity and erosion has sculpted the land over a millennia. Now a world heritage site, Hampi offers travellers the opportunity to be hypnotised by the human and natural history of the area.

Located about 7 hours inland from the beaches of Goa, Hampi has become a common pit stop on the backpacker circuit. The cooler months from November to March are peak season, but visiting outside of these times offers the opportunity for a more personal experience. No matter what time of year there will be an assortment of backpackers from around the globe waiting to welcome you into this home away from home. 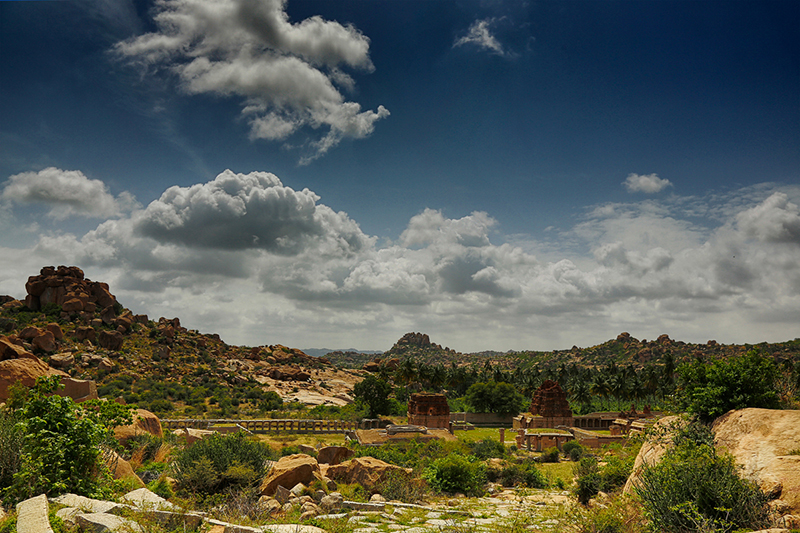 The rugged landscape of Hampi is as much a drawcard as the ruins. Photo by Vinoth Chandar, Flickr

How to get there: Though the road is long and bumpy, Hampi is easiest to reach by bus from Goa’s tropical beaches. You can also take a train from any major city in India to Hubli and then make the short trip by bus or taxi to the ruins.

MORE: A SHORT GUIDE ON WHAT TO DO WHEN TRAVELLING IN INDIA 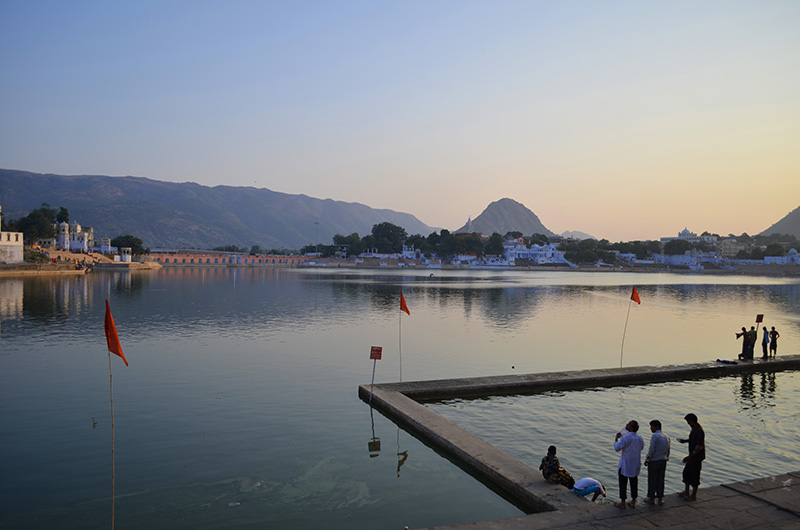 A tranquil view of Pushkar from the bathing ghats of Pushkar lake. Photo by Liam Taylor

The desert state of Rajasthan is best known for it’s rugged landscapes, ancient forts and stunning palaces. The Rajput empires that flourished here for so long have left striking cultural and architectural remnants of their reign, providing a glimpse into a majestic past. Along with romantic Udaipur the pink, yellow and blue cities of Jaipur, Jaisalmeer and Jodhpur are the most popular tourist destinations in the state.

Pushkar is much smaller than any of its counterparts and the population mostly travels to nearby Ajmer for work, yet the town is by far the most religiously significant site in Rajasthan. Situated around Lake Pushkar, the town is one of the five sacred pilgrimage sites for the Hindu religion and receives thousands of devoted visitors each year. It also holds the annual camel festival and Pushkar fair in early November, when people from all around the world come to bathe in the holy lake and get a look at the largest gathering of camels in the world. 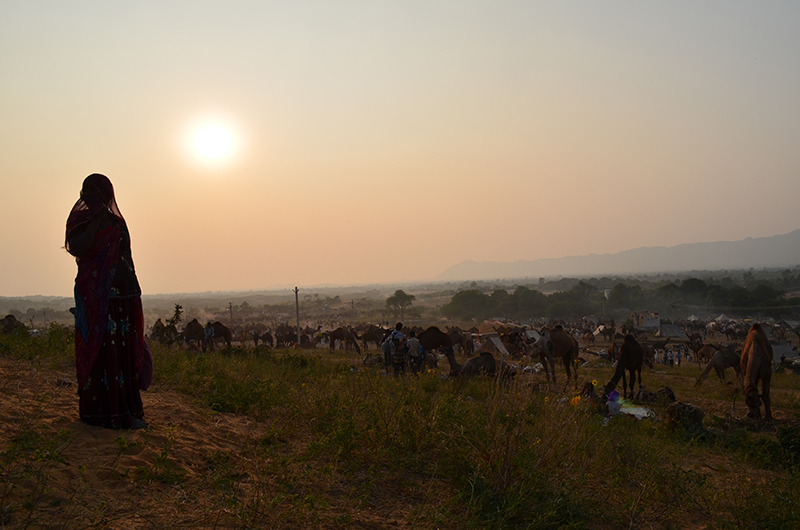 A woman watches over the camel fair in Pushkar. Photo by Liam Taylor

For the backpacker, Pushkar is a chance to experience Rajasthani heritage and landscape without the expense of a trip to Jaipur or Udaipur. Those visiting during the camel festival will also see one of the most unique festivals in the world whilst also witnessing a scene of great religious significance. Basically, Pushkar should not be missed if you are backpacking in Rajasthan.

How to get there: Direct buses can be taken from Delhi or any major city in Rajasthan. There is a train station and a small airport at nearby Ajmer. From here taxis, buses and rickshaws take about an hour to reach Pushkar. 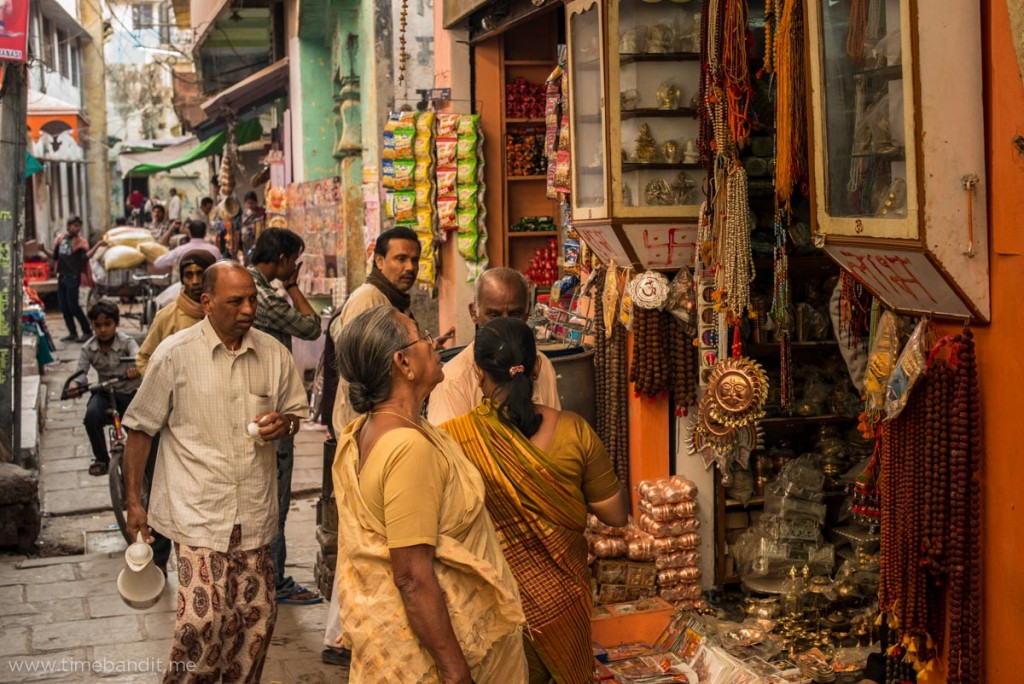 The laneways of Varanasi are filled with colorful people. Photo by Liam Taylor

Varanasi is the oldest living city in the world and the most sacred to the Hindu religion. It lines the banks of the Ganges in the state of Uttar Pradesh and for the unprepared traveller it will provide more than a little shock factor. A disorderly jumble of vibrant laneways take you into an unrelentingly chaotic world. Here you will rub shoulders with gaunt cows, wash away your sins on the ghats (giant steps) of the Ganga, have monkeys steal your possessions and be pushed out of the way as a dead body makes its way to the funeral pyre. It is the madness of India simultaneously at its best and its worst. Not for the faint-hearted certainly, but if you let your guard down you will fall in love.

The Old City spreads back from the Western bank of the river in a mess of laneways and this is where most backpacker hostels and guesthouses can be found. The twists and turns can be disorientating but most locals will be willing and able to help you out if you ask politely. A must-see for backpackers is the Blue Lassi shop in the Old City, a family-owned business churning out delicious lassies ? in a variety of flavours for over 75 years.

How to get there: Varanasi can be reached directly by train from most major cities in India and there is also a small airport for those wishing to fly in. Beware of touts when you first arrive, they may try to guide you to a particular guesthouse or hotel where they will be paid a commission. 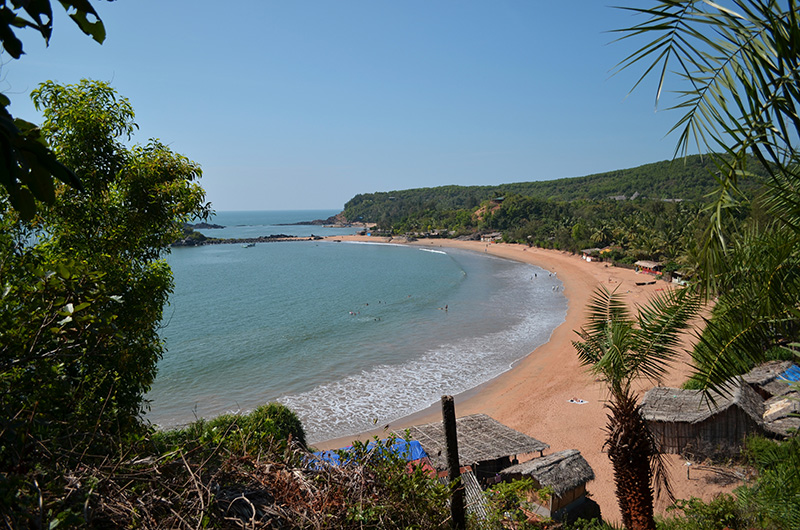 A view of Om Beach in Gokarna. Photo by Liam Taylor

The beautiful tropical beaches of Goa attract an abundance of backpackers every year and rightly so. White sand, blue sky, palm trees and azure seas. What more could a backpacker want? Unfortunately, the popularity of beaches like Anjuna and Palolem have also caused rising prices and environmental instability that is starting to compromise its reputation as a cheap and natural getaway. Travel just a few hours south into the state of Karnataka and you will find Gokarna, a piece of coastline just as beautiful as any in Goa but as yet without the negative effects that tourism can have. 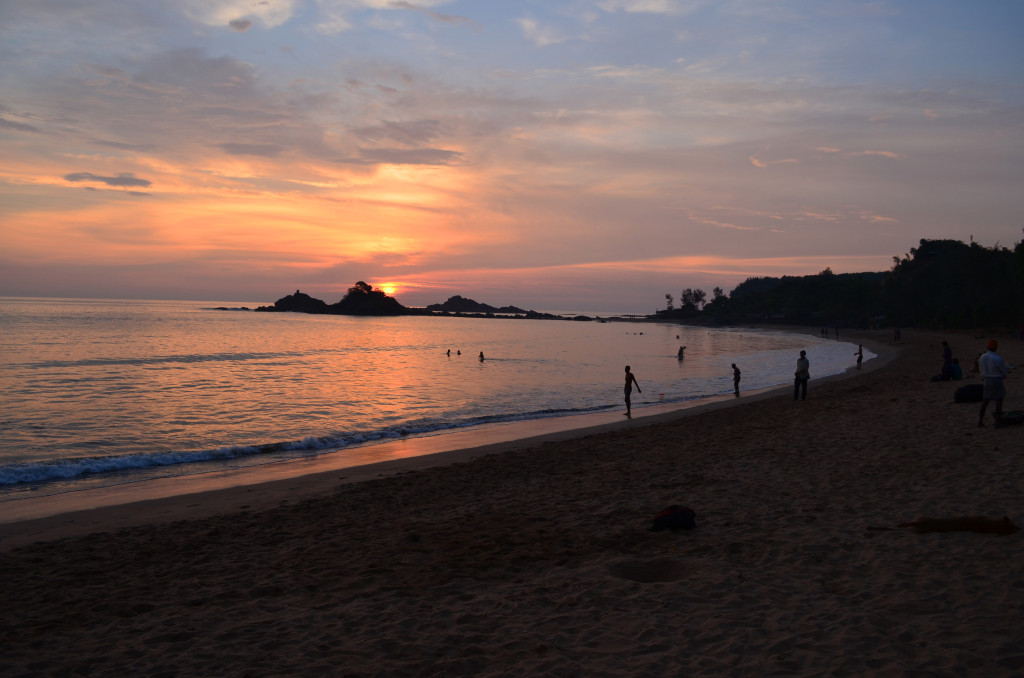 Sunset on the beach in Gokarna. Photo by Liam Taylor

This is the backpacker holiday that most crave with the decision whether to swim in warm, clear seas or bake on the golden sands the hardest you’ll make. As the sun sets over the horizon people from around the world meet to exchange stories and songs around a bonfire on the beach. There are four beaches offering varying levels of development, the furthest without access to fresh water or electricity. It is untouched tropical paradise a world away from daily routine and the full time job.

How to get there: Trains service Gokarna daily from Mumbai and Goa to the North or Kerala to the south.