Where to find the best surfing in South Africa

The greatest part about surfing around the Cape of South Africa is deciding which shoreline to choose from. There’s so many places that appeal to surfers of every level: the learners, the pros and the ones who just prefer to float on a board in the great unknown. Find out where to find the best surfing in South Africa.

Where to find the best surfing in South Africa: Jeffreys Bay 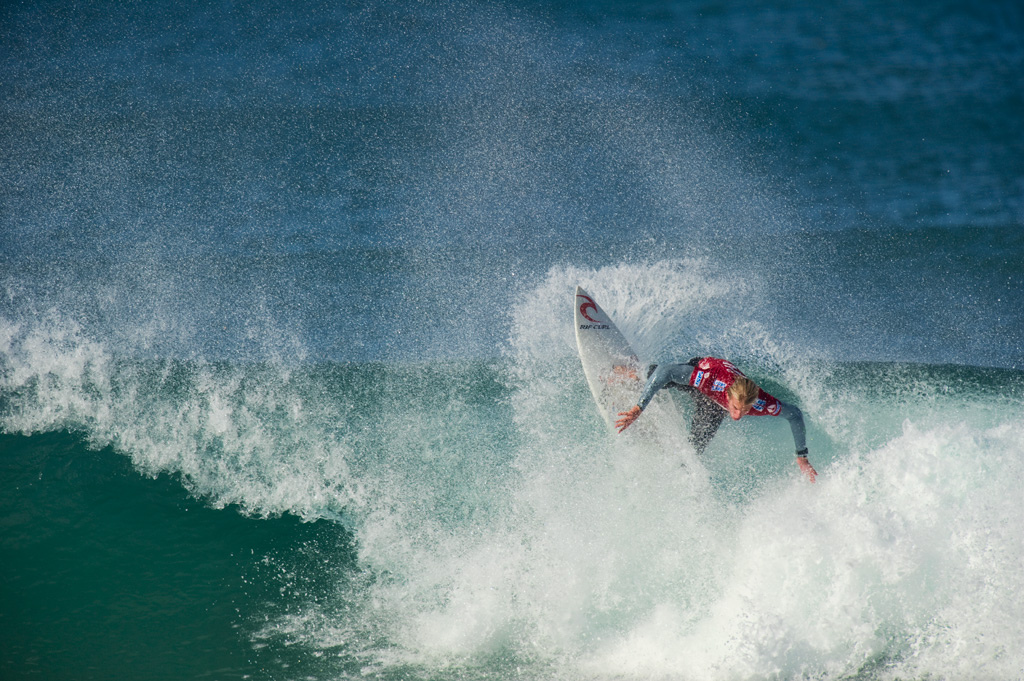 A surfer competes in the Billabong championship at Jeffreys Bay, South Africa. Photo by gaftels, flickr

Known to local surfers as “J Bay”, Jeffreys Bay is world famous for its massive waves and has some of the nicest water to be in around the Eastern Cape – hit up Blue Flag Beach. At J Bay, you’ll find a number of waves to hit – small and large, easy cut swells and barrels.

Today, Jeffreys Bay is ranked as the second best place to surf in the world and is host to the annual Billabong Pro ASP World Tour surfing event. Surfing spots in Jeffreys Bay include Kitchen Window, Albatross, Point, Super Tubes and Tubes; keep in mind there are a few places you can’t surf!

For learners, there’s a great number of surf schools for you to pick from. Jeffreys Bay is a location literally dedicated to the waves, so there’s loads of locals who know the waves better than the backs of their hands and are willing to give you some pointers on how to conquer them. 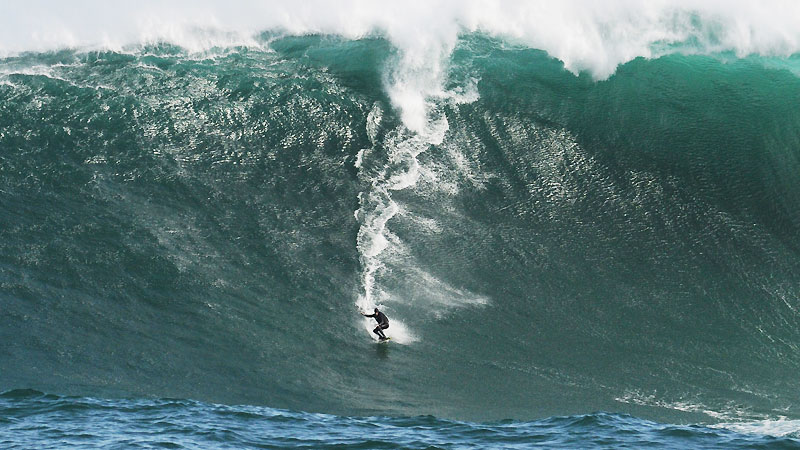 Hitchin’ a ride at the massive waves of Dungeons. Photo via blogspot

At Dungeons, surfers go hard or go home. When conditions are right – and they almost always are – waves can reach up to 21 metres high, so it’s safe to say that this is a pretty epic surfing spots for experienced surfers.

Dungeons is host to the annual Red Bull Big Wave Africa Surfing Competition, and for all the right reasons. It’s recommended that the big guns attempt to ride the waves here, so pack or rent accordingly. It’s advised that larger surfboards be used – 10 footers, and that wetsuits be worn as the water does get relatively cold and waves will in most cases, give you a dunk or two.

There are a few places at Dungeons you can surf at, each with different difficulty. The first main section is the slab, a flatter surf spot that builds into a great barrel. The next section rolls from the barrel to the two-point-five section which refers to the depth of the water between the surfer and the bottom. The last section is the largest, and arguably what makes Dungeons popular – known as Washburn’s Peak, the area where the big waves roll in. The waves are infrequent but are big, so the wait is worth it.

How to get there: The closest airport is Cape Town, and from there you can rent a car and drive to Hout Bay, which is only about a 25 minute drive. From there you can drive to Dungeons surf beach. It’s a good idea to stay in this quaint little city for its fresh seafood and choice between classic B&B and luxury hotels.

MORE: 7 OF THE BEST SURF PLACES AROUND THE WORLD 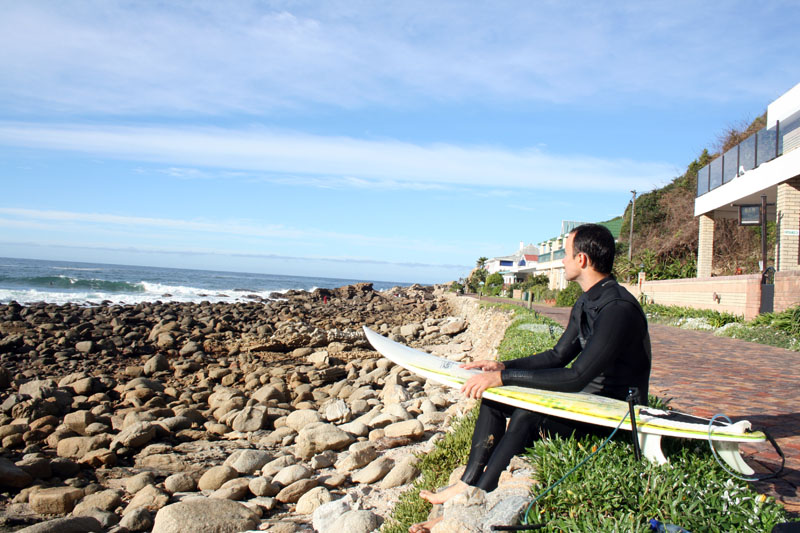 A surfer waits for the perfect break at Victoria Bay. Photo by webmarcos, flickr

A narrow, steep bay with great consistent wave breaks to offer surf for all kinds of wave riders. Victoria Bay is also a fairly popular holiday destination during the warmer months of the year, despite being dominated by predominately proud local surfers.

The waves of Vic Bay are world class, and the beach has known to hold contests and competitions on both a local and international scale.

The best part about Vic Bay is that it’s a long beach. On most days it is fairly crowded, so the perk of having a long beach is that there’s enough surf for you to catch a break. At the bottom of the water are boulders though, so be careful when getting dunked. There are also a few surf schools around the bay that can give you pointers on where to surf and give you a few lessons if needed.

How to get there: You can fly from an international airport (Cape Town, Port Elizabeth) to the domestic George Airport, and from there catch a shuttle bus or cab into the city. They run fairly frequently, and the airport is only 11km out of the city, so the fare isn’t too pricey. 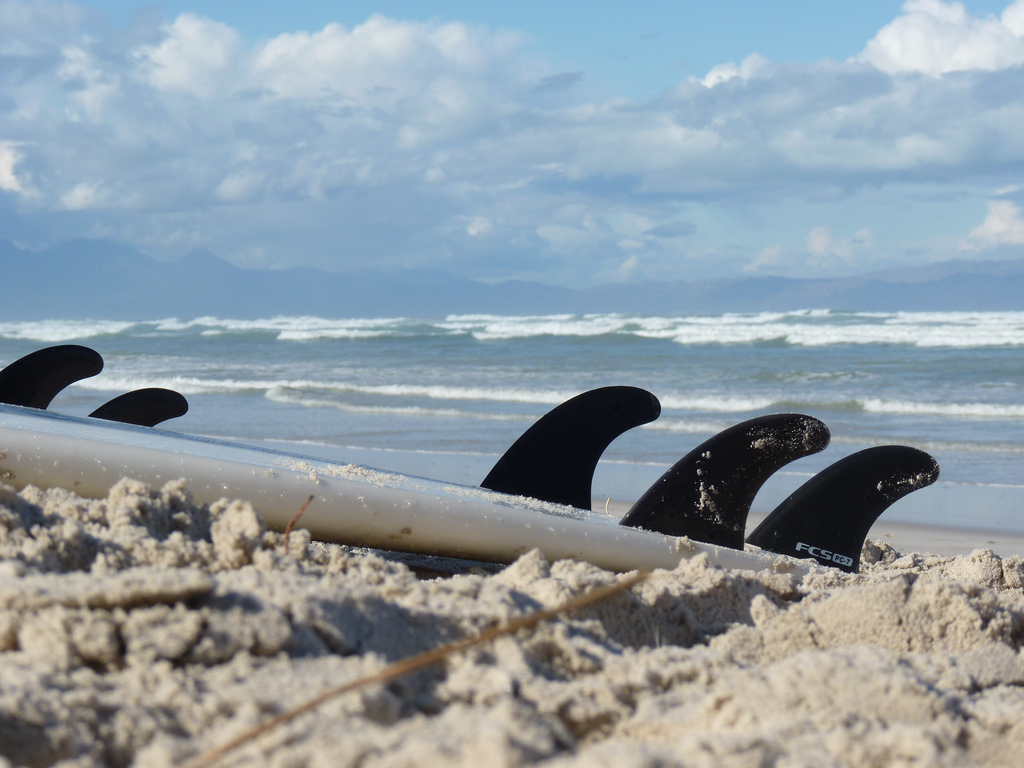 Surfboards in waiting at Muizenberg. Photo by t.bo79, flickr

Considered to be the birth place of surfing in South Africa, Muizenberg is home to killer waves that stretch over a beach length of 20km. It’s said that Muizenberg is paradise for those who prefer long board.

If you’re planning on having a surf at Muizenberg, it’s best to get there early as both the water and the beaches fill up quick which both tourists and locals alike. There’s all kinds of waves to jump onto, particularly because the beach expands over such a massive distance and weather permits all kinds of activity.

There’s heaps of room in Muizenberg for learners – in fact it’s probably one of the better surfing destinations for learners due to the amount of surf schools that are there offering different rates. Each school offers rental of boards and wetsuits so you always get your money worth; it’s all about just finding an instructor you prefer, really. 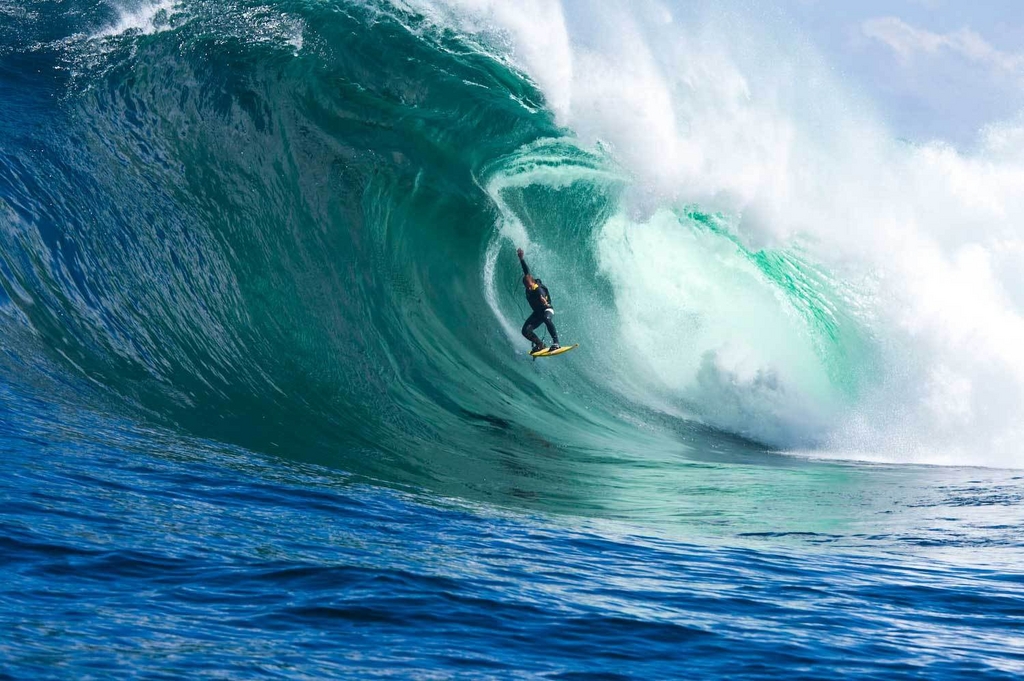 Tackling the massive waves of Cave Rock in Durban. Photo via takunikblogspot

Cave Rock is a place dedicated to epic waves for experienced wave riders. It’s a fairly aggressive surfing location, and is very rarely a full beach location due to its competitive swells.

Swell size normally range from 5 foot to about 15 feet and over, but it’s not necessarily the height that makes these waves a challenge. The large swell picks up and can be very strong, offering extreme barrels smashing over a reef-rock bottom.
You can choose to surf or be spectator at Cave Rock – try your best at the aggressive barrel and the reefy bottom and you can either show the local surf extremists how it’s done, or sit it out and watch them take on some of the gnarliest waves in South Africa.

How to get there: The closest domestic airport is Virginia Airport. From there, it’s best to hire a car and drive south-west via the M4 and R102. The trip should take just over half an hour.

For surf updates and reports, use Magic Seaweed. They offer great weather and surf reports that are constantly fresh. These reports can definitely help you in your travels when organising where to go next.