Dining on the edge of a cliff at the Grotta Palazzese

Carved into a crevice of limestone rock face facing the Adriatic Sea lives the Grotta Palazzese Hotel and Restaurant. Over millions of years, the sea has carved out caves that twist beneath the streets of Polignano. This place is sure to ‘wow’ you with its charm, and stunning ocean views. If you’re in Puglia then this place is a must visit  if you’re travelling to Polignano a Mare. 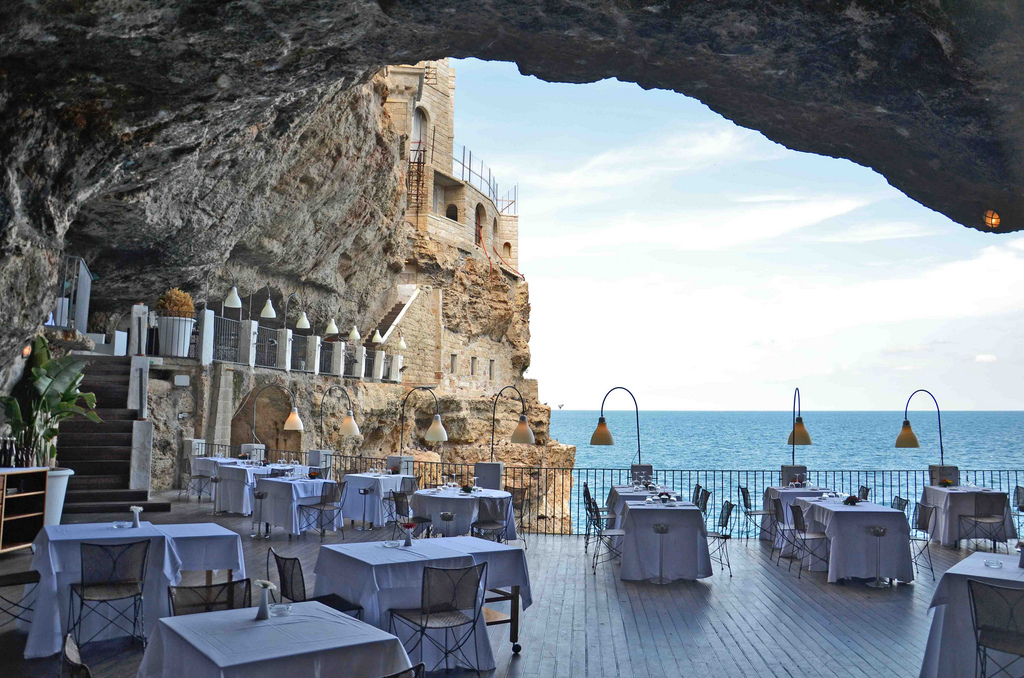 The dining area in the cave at the Grotta Palazzese. Photo by Giovanni Barnaba, flickr

Most notable for its amazing location, the Grotta Palazzese attempts at offering guests only the very best in quaint, romantic and secluded getaways. In the summer time, you can dine in the cave restaurant, with its wonderful views out over the sea – make sure not to miss the sunset whilst dining here. The seating is nestled into a cave, keeping guests cool from the warm Italian summer. Keep in mind that this restaurant is only operating from May through to October, so if you are travelling to the Grotta Palazzese particularly for the restaurant, make sure to travel during that time frame.

It is said that the cave restaurant has quite a history; apparently the site existed back in the 1700′s and functioned as a place to dine for banquets of local nobility.

In winter the Sea Lounge operates as a restaurant. It also offers views, but is not as stunning as the cave as you will most likely be seated indoors and sunset is earlier in the afternoon.

The Grotta Palazzese offers functions and conference bookings, both of which can be organised indoors or outdoors. The setting is quite romantic, particularly outdoors by the cave where candles are lit and the ocean offers calming noise and a breeze, so keep that in mind when organising events – it’s the perfect location for an engagement! 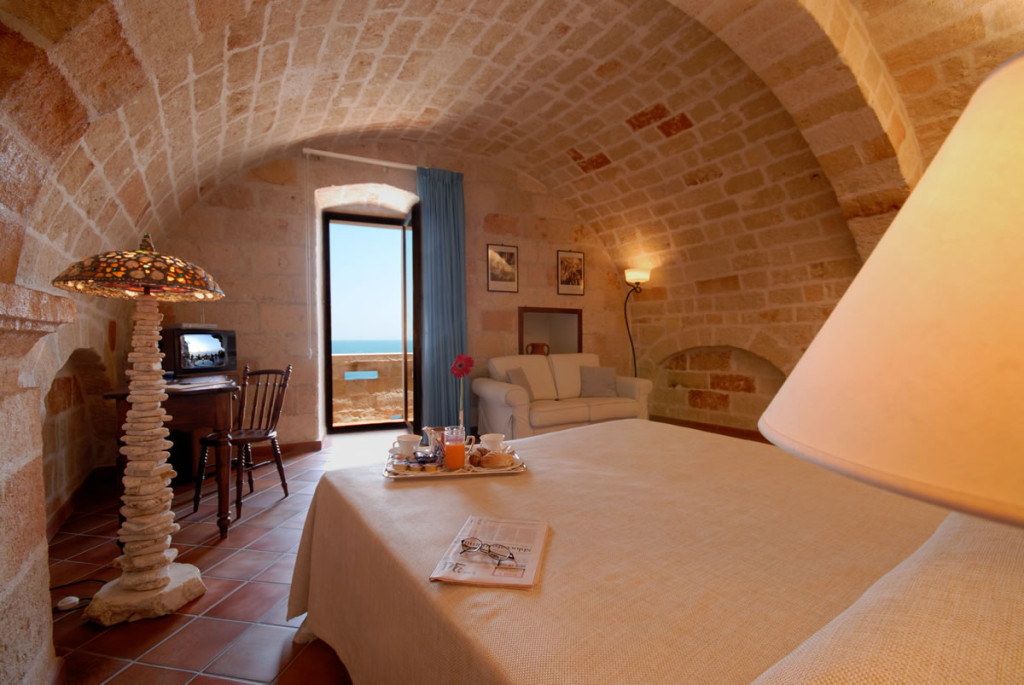 A double room with a balcony. Photo from www.ricevimentipuglia.it

The hotel itself is quite reasonable priced. You can stay in a single use double room from $105 USD a night, including breakfast. Other rooms offer views, or are larger and range in price from roughly $112 to $230 depending on your needs and wants. Most rooms have views, but keep in mind you will pay more for a view and even more for a balcony.

What to expect at the Grotta Palazzese 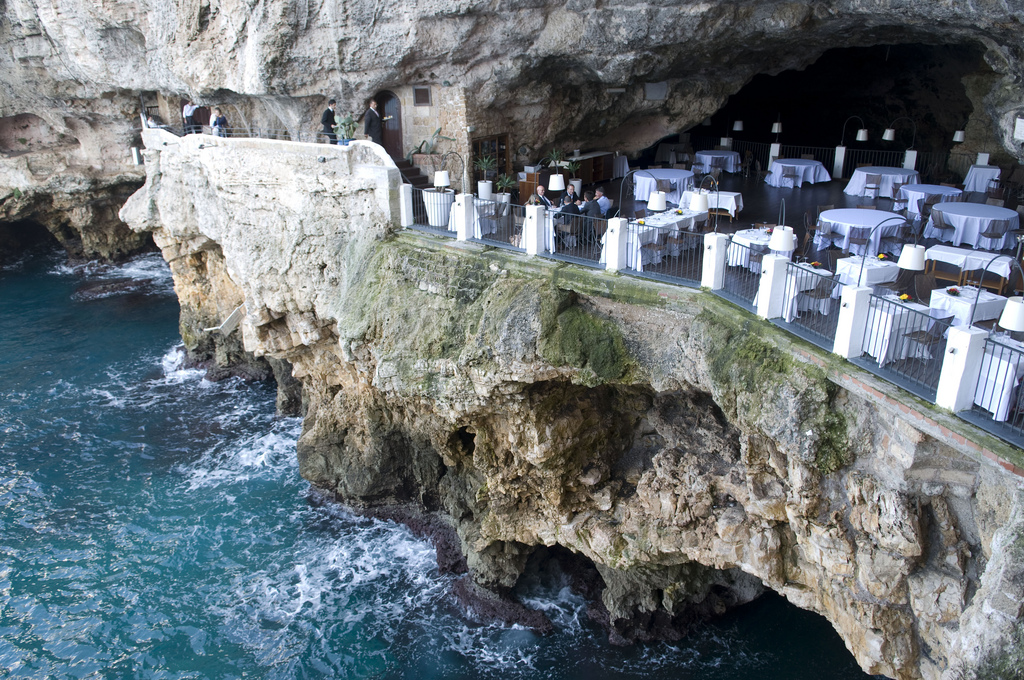 The outdoor cave restaurant as seen from the hotel. Photo by camerapingu, flickr

Puglia has great weather almost all year around so there isn’t really an off period when it comes to travelling to the area. However, when you’re visiting the Grotta Palazzese you have to make sure that you aren’t disappointed when it comes to dining options as the restaurant is the main feature.

If you wish to dine in the cave outdoor restaurant, then you must visit between May and October which is summer as it is the only time the restaurant functions. In the other months you will be given the option to dine in the indoor Sea Lounge restaurant.

Aside from the view, the food is spectacular 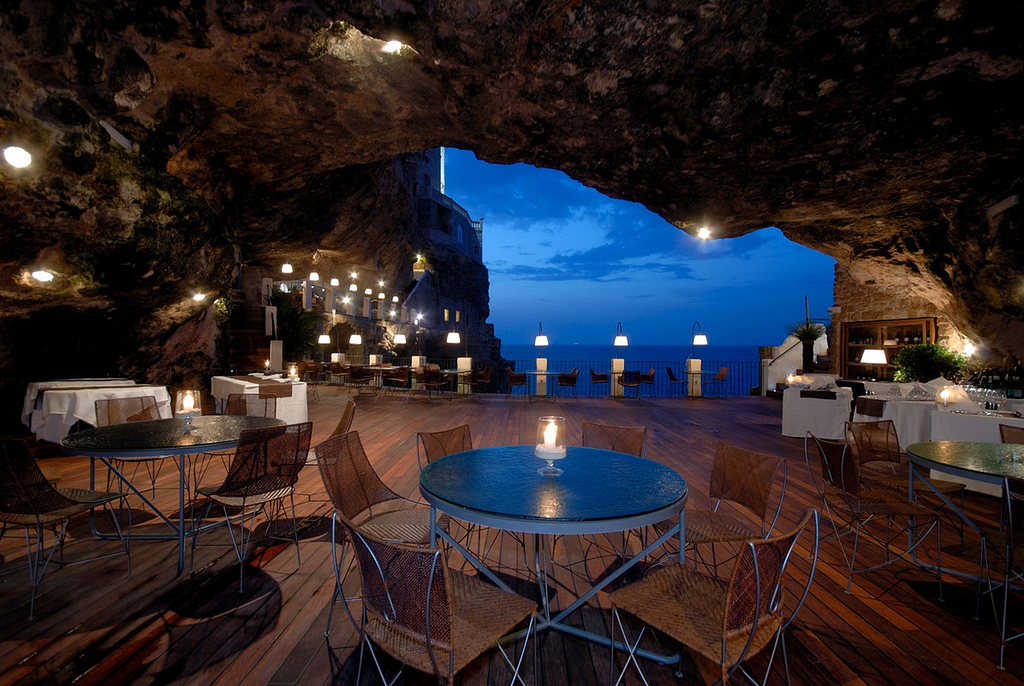 The cave at night in its best romantic setting. Photo by VanQuocMinhDang, flickr

Think traditional Italian cuisine – the Grotta Palazzese is renowned for its rich history and culture so it’s only natural that they serve the very best of what is Italian.

It is common for lobster, shellfish, fresh fish and pasta dishes to be served as they are local delicacies.

What to do in Polignano a Mare 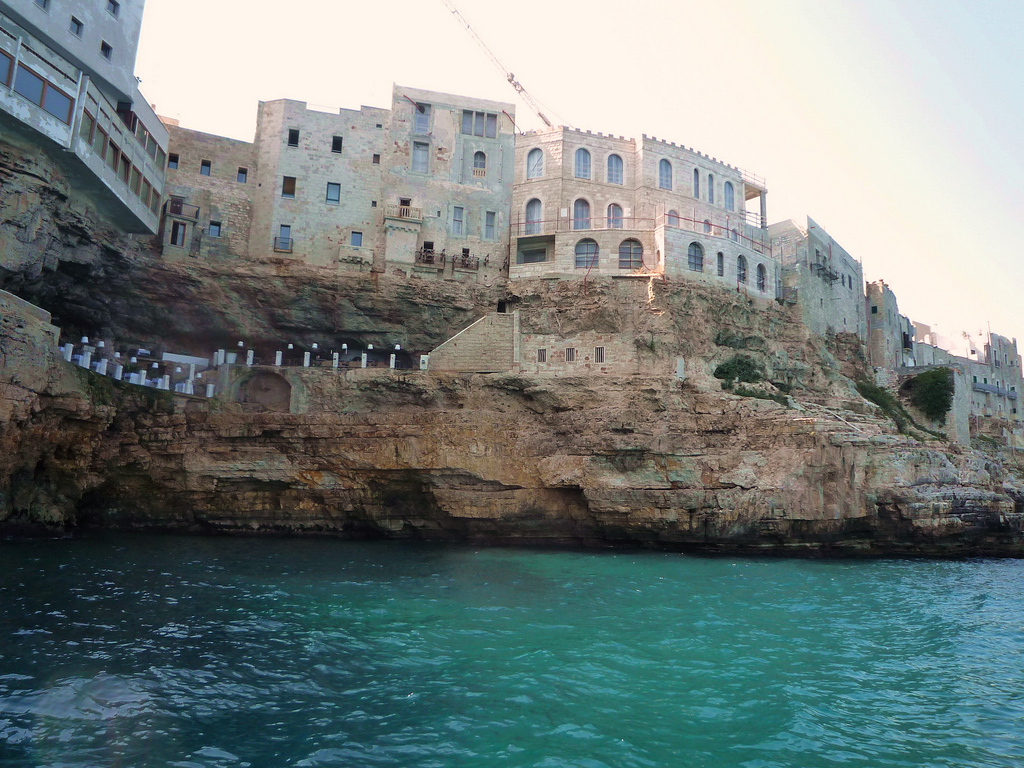 The hotel is set into the cliff face coastal line. Photo by gippi52, flickr

Grotta Palazzese is located just to the left of a bay beside an amazing beach that tourists and locals commonly use to soak up the sun. On the beach front, there are bars, restaurants and cafés.

Visit the Coco Beach Club for a fantastic day spent beach-side, or maybe spend some of your time at the Museo Pascali – an art gallery and museum in the city centre.

A popular attraction in Polignano a Mare are boat tours, both guided and self-guided, which are a great way to see the cliffs and he spectacular deep blue water off the beaches of Coastal Italy. Dorino boat tours are popular guided tours which take tourists out to the ocean for swimming, diving and sightseeing.