8 of the most interesting houses built among nature

While grand architecture certainly has its place in modern society, sometimes it’s a rare treat to see houses which have been built with nature at heart. Here is a list of houses which do just that, by stripping back to basics they blend beautifully with their natural surroundings. 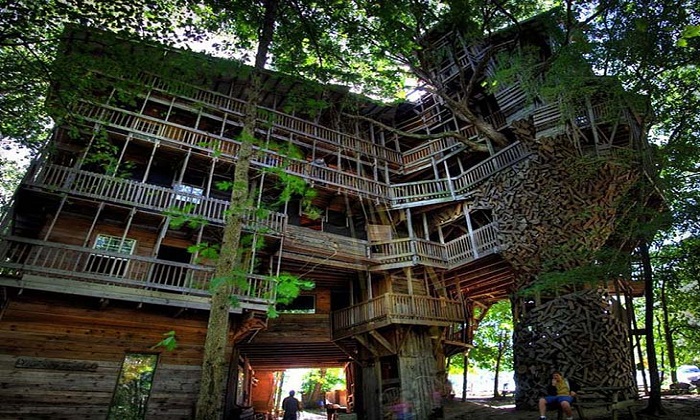 This grandiose 100-foot-tall structure is said to be the tallest tree house in the world, and was built entirely out of reclaimed wood by Horace Burgess in Crossville, Tennessee. The treehouse and church is supported by a still-living 80-foot-tall white oak tree with a 12-foot diameter base, relies on six other sturdy oaks for support.

While Guinness World Records officials can’t officially confirm it as the tallest treehouse in the world, there’s no disputing the house’s grandeur. In addition to its numerous rooms, the house features spiral staircases, trap doors, a choir loft, and a basketball court can be found on the third floor. The treehouse is open for visitors who wish to check out this grand treehouse and its lush surroundings. 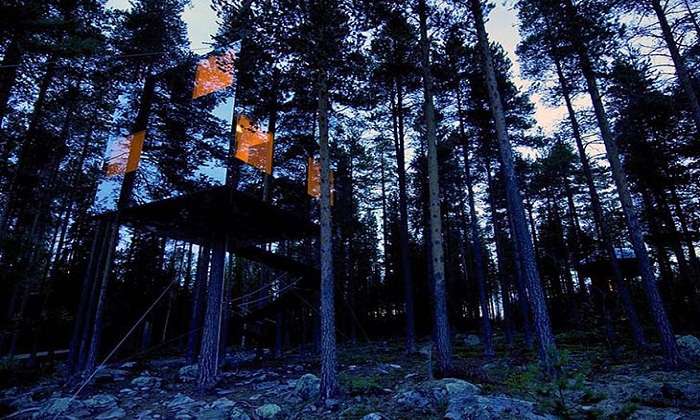 Almost invisible and perfect for hiding, the Mirrorcube is part of the Tree Hotel project in the North of Sweden. The Mirrorcube is a house among the trees, camouflaged by mirrored walls to reflect the forest which surrounds it.

Because the Mirrorcube is almost invisible, to prevent birds from flying into the mirrored walls they have been clad with infrared film. The film is invisible to humans, but visible to the birds. The interior is made from plywood with a birch surface. The six windows provide a stunning panoramic view. The Mirrorcube is perfect for two people with a double bed, bathroom, lounge, and rooftop terrace, along with a 12-meter-long bridge which leads up to the treehouse. 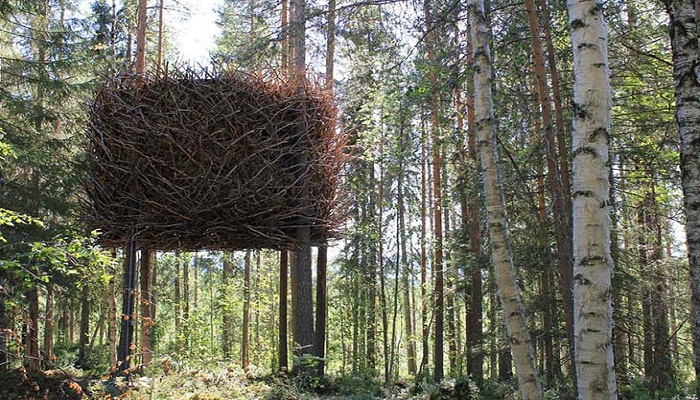 The Bird’s Nest Tree House, created by the creators of the Tree Hotel, might confuse the birds even more. Although it looks like a massive nest from the outside, the tree house has a modern and high-standard room built inside.

The Bird’s Nest is built to emphasis the contrasts between the outside and inside. The exterior is nothing but a gigantic bird’s nest; an effective camouflage allowing the building to become part of the surroundings. The interior, on the other hand, is familiar and exclusive. It’s a spacious environment where a family with two children could comfortably spread out.

The walls are clad with wooden panels and the windows almost disappear in the exterior’s network of branches. The room is 17m² and has separate bedrooms, bathroom, and living area. You enter the Bird’s Nest with the help of a retractable staircase – why not live like a bird for a night in your own luxurious nest. 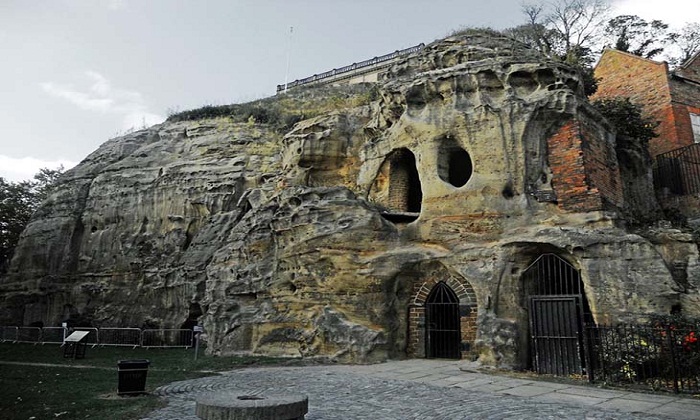 Hacked into cliffs and steep hills, cave houses were residences for Nottingham’s poorest until they were outlawed in 1845. More recently, the easily carved sandstone underneath Nottingham allowed generations of city dwellers to carve out little additions and cellars underneath and behind their traditional homes. Now, it is a popular tourist attraction. 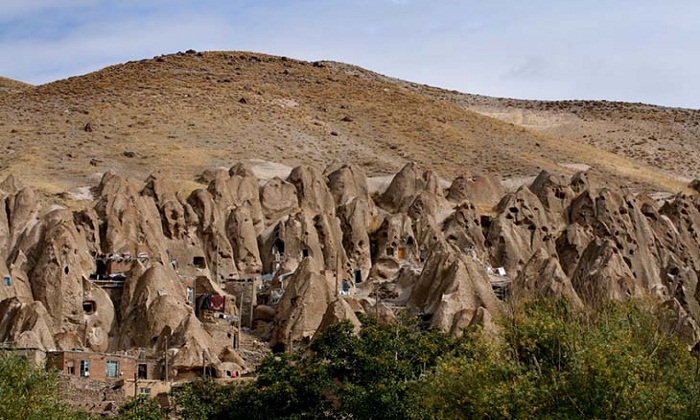 The cone-shaped structures in Kandovan Village were naturally formed from volcanic ash and debris. Natural erosion created small pockets in the pillars that were found and shaped into cave dwellings. Most of these houses are between two and four floors high, and have connecting tunnels leading to surrounding structures – making the dwellings similar to an ant’s nest.

The village is over 4,000 years old, and is a prime spot for tourists who are interested in staying somewhere a little different. A luxury hotel has even been built to fit in perfectly with the original settlement. 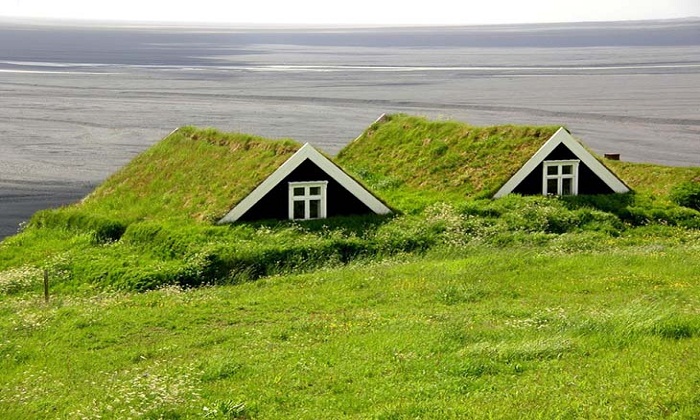 Icelanders have been digging homes into the ground long before earth-homes became the new eco-friendly building trend. Dirt makes a great insulator and helps keep residents warm and dry. The floor of a turf house could be covered with wood, stone or earth, depending on the purpose of the building. They also contain grass on their roofs, which helps them blend in nicely to their Iceland surroundings. 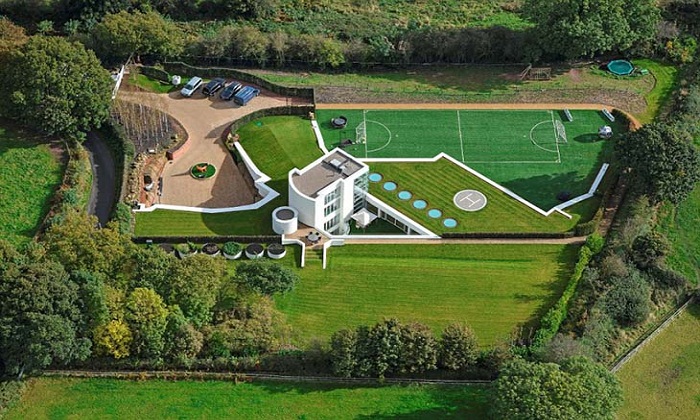 This house is built in an amazing sandstone cave on a 13,600 sq ft estate in Helsby Hill in Frodsham. Helsby is a large village and civil parish in the ceremonial county of Cheshire, England. This house is valued at £4.75 million, and it’s easy to see why. It is equipped with a helipad, a football field, five bedrooms, a staff flat, and a window that can give you a panoramic view of the beautiful countryside. The green grass growing atop the house disguises it well within its green surroundings. 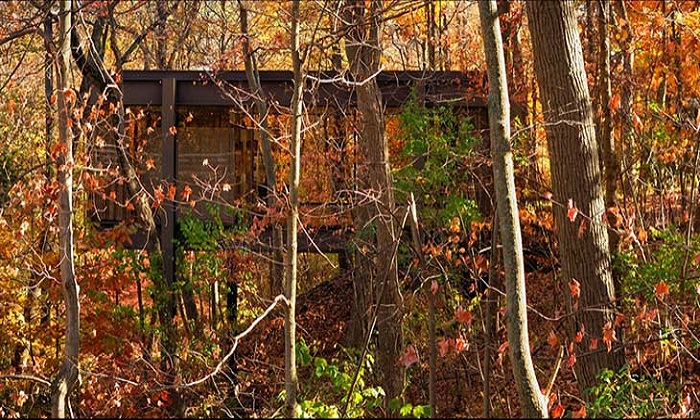 Built in 1953, the Ben Rose House blends in with the surrounding landscape through its non-intrusive design within the forest. In 1958, the house was one of 12 homes in the nation featured in a Bethlehem Steel publication promoting the use of steel framing for residential design. A purpose-built automobile pavilion is also located on the property, designed by Speyer’s first graduate student David Haid, specifically to house the Rose’s classic car collection.

The Rose House was designed by architect A. James Speyer for textile designers Ben and Frances Rose, and the splendor of the architecture of Ben Rose House gained recognition in the mid-1980s, when the garage’s see-through walls were smashed by a Ferrari in the film Ferris Bueller’s Day Off.