How to make the most of Paris in 24 hours

The city of monuments, museums, architecture and culture, Paris is a European gem. It has had its feature in one-too-many romantic movies and novels, and has been internationally recognised as one of the most beautiful and momentous cities in the world for centuries. There’s just so much to do and see in Paris – not to mention to eat, drink and shop as well. Here’s our guide on how to spend the perfect 24 hours in Paris, the city of love: 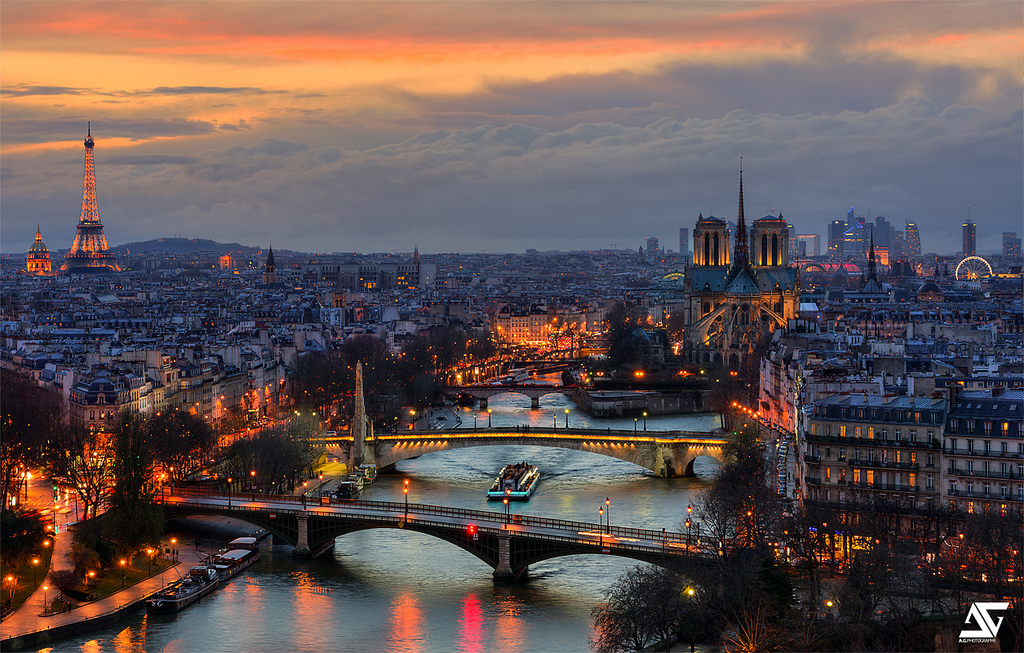 There’s no wasting the day here, and the early bird gets the worm. Be up and ready earlier in the morning for a visit to the southern bank of the Seine River. The La Rive Gauche is known at the “Left Bank” part of the river, and refers to an earlier era of Paris. This place is once where famous writers and philosophers would spend their time; including Pablo Picasso, Ernest Hemingway and F. Scott Fitzgerald. Stop for breakfast first; there are many cafes and restaurants along the waterfront that offer French cuisine. From the Seine you have spectacular 360 degree views of the Place de la Concorde – the town square piazza with views of the Arc de Triomphe and The Assemblée Nationale . The square was also originally the area in which people were beheaded – the first was Louis XVI, who was then followed by 1343 more people – including Marie Antoinette. Use this opportunity on the upper Seine to take great photographs of the landmarks from afar – most are too big to fit in a photo up close. 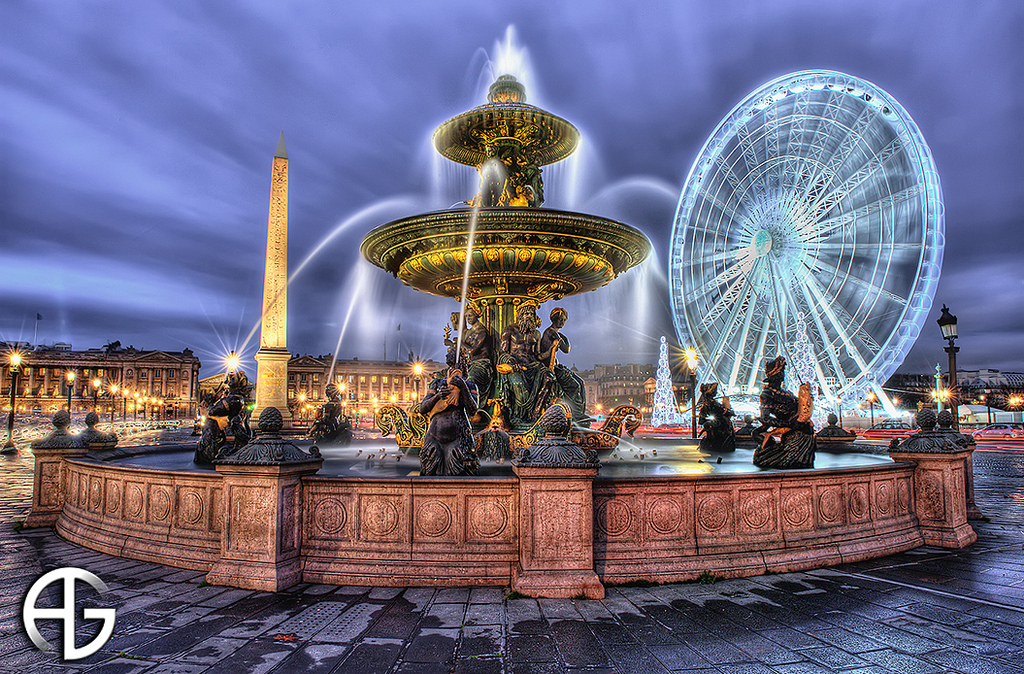 A fountain at the Place de la Concorde. Photo by Anthony Gelot, flickr.jpg

Stroll down the Seine and cross over into City centre to view to Cathedral Notre-Dame, a famous Gothic landmark captured nicely in the brisk morning sun. The cathedral is one of the most well-known landmarks in the world, with stunning sculptures, stained glass windows and large Romanesque architecture – its construction completion dating back to 1345. Make sure to walk the full circle around the cathedral to really view all of what it has to offer – and look up! On the roof edges there are wonderful statues of gargoyles. Keep in mind that there often is a line, and may be a wait to enter the cathedral – but inside there are massive organs that add to the colossal structure of the place. Now you can begin to understand the true beauty held within such an ancient place. 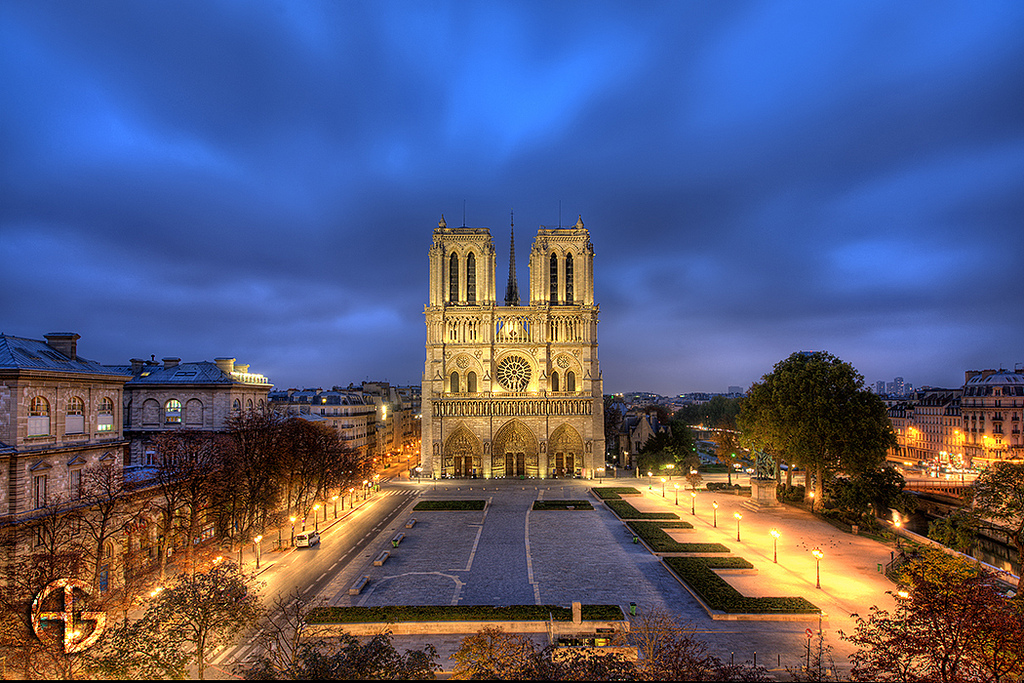 On the other side of the city centre is the Sainte Chapelle – a Gothic chapel constructed in 1239. It was originally built to be the home to a collection of religious relics owned by King Louis IX – including the Crown of Thorns, one of the most important religious relics in Christianity. Inside, the chapel is stunning, with high roofs of vivid colour and the most spectacular array of stained glass windows, that were somewhat damaged during the French Revolution. The Sainte Chapelle was designed to sit alongside the Palace, and was considered an addition to the royal grounds within the Palais de la Cite, now known as the Conciergerie where it remains as one of the last surviving buildings. 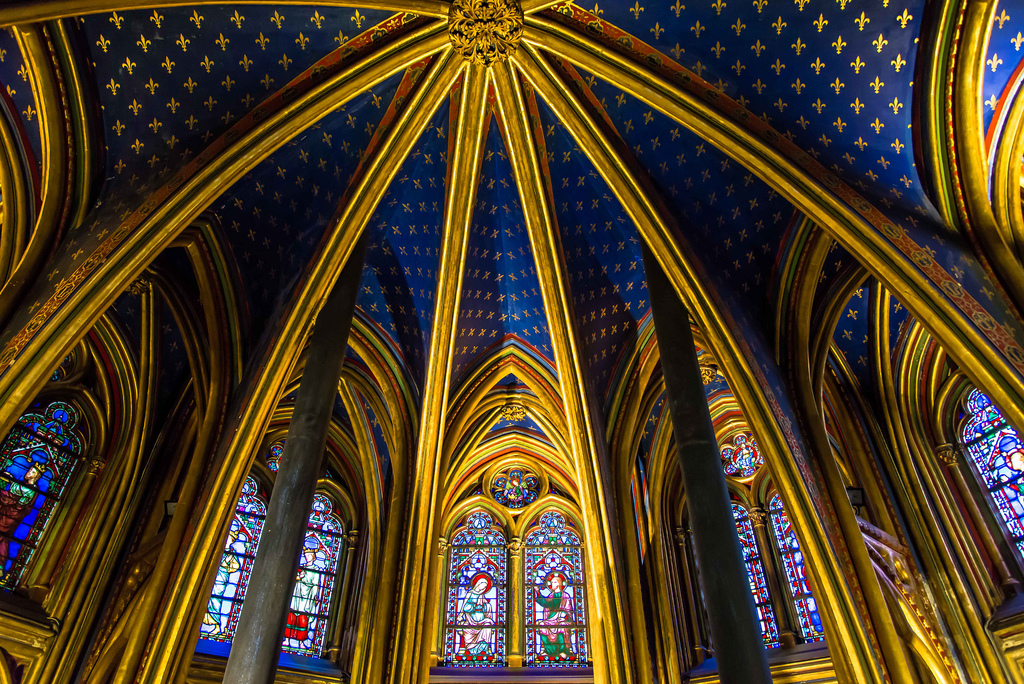 One of the most famous monuments in Paris is the Louvre – and you must be sure not to miss it on your endeavours throughout this wonderful city. Stroll from the Sainte Chapelle to join the queue, where you will enter the New Louvre – or Louvre Pyramid – join a guided tour or go alone to view some of the most famous works in the world, including the Da Vinci’s Mona Lisa and The Raft of the Medusa by Theodore Gerucault. Guided tours are a great way to grasp some of the history of each of the paintings and sculptures, as well as some of the diamonds on exhibition. On the outside, you can view the Louvre Palace – and in queue for the museum, you will be witness to some remarkable people on the street who busk.

Keep in mind that there are over #5000 pieces on exhibition in the Louvre museum alone, and so you will not see the entire thing in one day. Guided tours are great because they showcase the most important pieces. However, if you are primarily interested in seeing this entire wonderful museum has to offer, it is best to dedicate an entire day to doing so.

Visit the Musee de l’Orangerie for art exhibitions in the late morning. It is here that you can view Monet’s Waterlilies, as well as paintings by Picasso, Soutine, Cezanne and Renoir. Built originally in 1852, the Museum itself holds quite the history and is located beside the Tuileries Garden – once where the Tuileries Palace resided in 1564. Eventually, the park was opened to the public and is now one of the loveliest places in the city to enjoy a stroll in the sun or lunch in a café or packed picnic. Stop here to enjoy the history as well as views of the Arc de Triomphe from an ideal distance whilst sipping French coffee in a park-café. 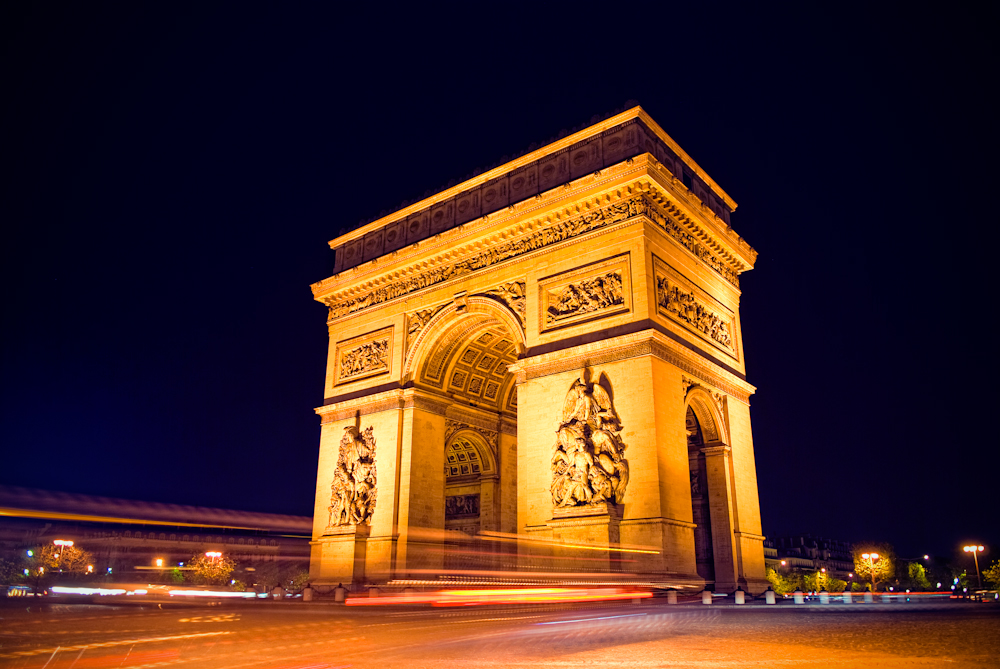 The Arc de Triomphe stands 50m tall and is covered in the inscriptions of soldiers. Photo via Allard Schager, flickr

Walk or catch a metro bus from the Tuileries Gardens to the Arc de Triomphe to see it in its full glory, standing 50 metres tall. The arch was built in honour to those who had fought and died for France in the Napoleonic wars and French Revolution, and has the name of all French victories and generals on the inner and outer surfaces. Beneath the arch is the Tomb of the Unknown Soldier from World War I – with an eternal flame burning for all those soldiers who fought and were never identified.

Walk down Av Kleber for a direct link to the Garden Trocadero (Jardins du Trocadero) for distance photos and views of the Eiffel Tower. The gardens are quite beautiful and offer a spectacular front view of the Eiffel Tower. Whilst at the gardens you can also stop in at the Musee National de la Marine or the Aquarium. Cross the river to join the queue that heads to the top of the Eiffel Tower – Paris’ greatest monument and world famous landmark. If you are feeling particularly fit, you can take the stairs; there are 3 levels, connected by 9 elevators and over 700 stairs. For those who are not comfortable in lifts – please remember that they are monitored by computers and surveillance to prevent them from overcrowding and stopping; and do expect lines for elevators during busy times. 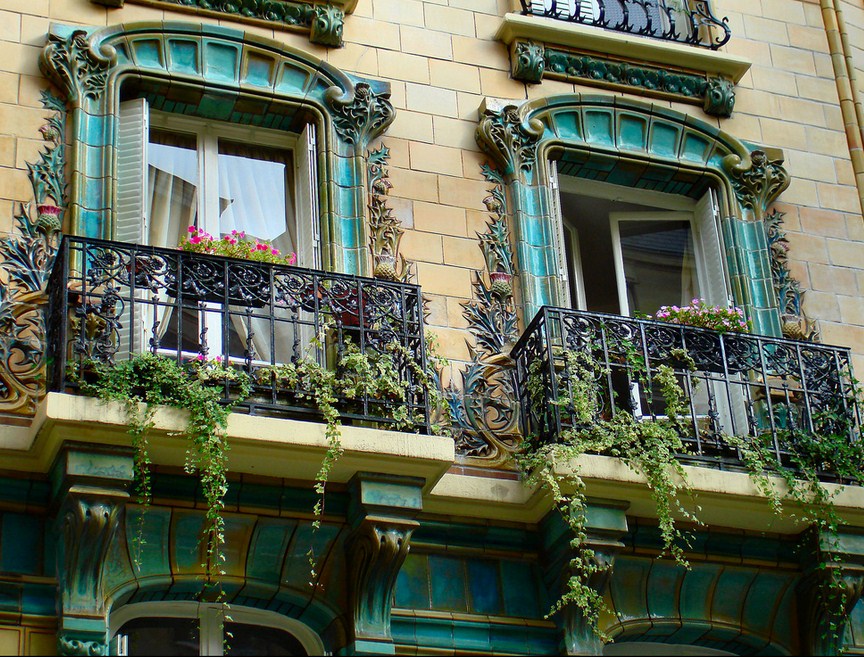 Stop in nearby Rue de Passy, a one way street that’s great for boutique and bargain shopping. You can find just about everything here; shoes, clothes, toys and food and nestled amongst it all are cafes, restaurants and a cinema. The area is known as “classical chic” with stylish high buildings and a great mix of boutiques and commercial department stores. This is an especially great place to rest, get a coffee and just enjoy a relaxing point in the late afternoon before heading out into the night. 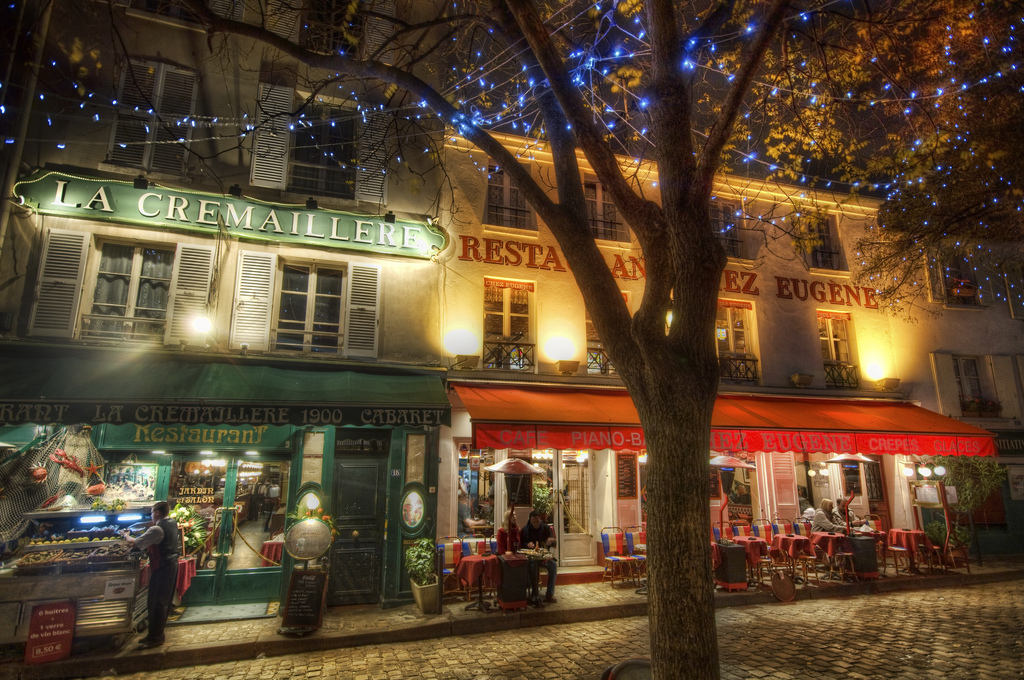 Catch a train or bus into the area of Montmartre – explore the area, which is quite unlike the city centre; it’s a place full of romance, cinema, theatre, bars and restaurants and of course, the Moulin Rouge. Shows for the Moulin Rouge normally start around 9pm – but for those who want to enjoy dinner and a show, be there around 6.30 as dinner is served at 7.00pm. Adult’s menus start from 180 EUROS including the show entry and ½ a bottle of champagne. There are also vegan and vegetarian options available. The Moulin Rouge show starts at 9pm, and roughly goes for two to three hours and should be an addition to anybody’s “must-see” list for Paris.

If you wish to eat before the show, there are a number of great restaurants throughout the Montmartre area. Try Le Bouclard for middle price-range French cuisine or La Trattoria Pulcinella for cheap Italian cuisine. 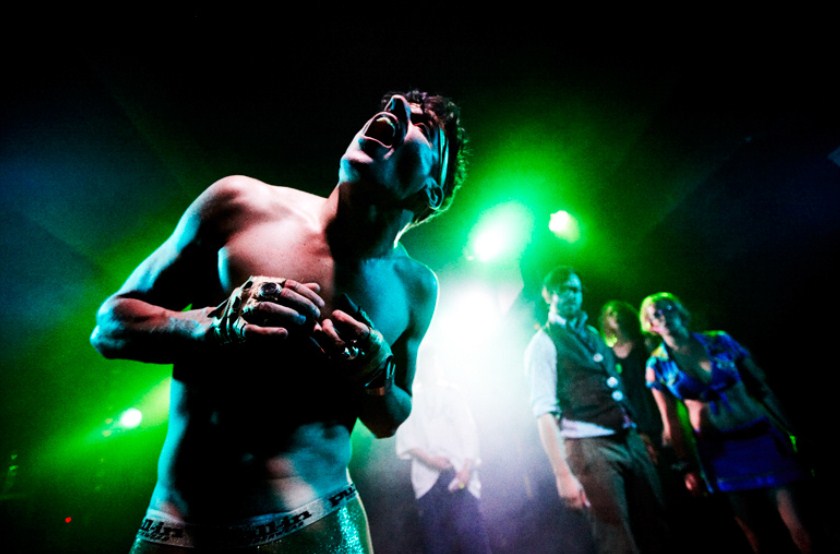 Performers on stage at the trendy Le Bus Palladium

The night is still young! Why not stroll through the busy streets of Montmartre and the surrounding areas in search for a bar. In the slightly grungier part of town, on Rue Muller is Le Blue Club, a hipster cocktail bar and club that serves drinks into the early hours of the morning. Despite its location, this club has a great reputation and is reasonably cheap – plus they have a secret cocktail that’s worth trying and if you want a drink custom made, they’ll make it for you here.

Head out afterwards to some of the trendy clubs in Pigalle. Try Le Bus Palladium, Chez Moune, Le Rouge or Chez Carmen. If you prefer the Gay clubbing scene, head back into the city centre to the Marais where there are a few gay bars and clubs – great for an extended night of fun. If you prefer a quieter night, you can opt for one of the bars in the Marais area, which are normally open until the earlier hours of the morning and often go overlooked by the younger crowd.