Top 5 under the radar islands in Indonesia

If you are looking for islands, look no further than Indonesia and its spectacular assortment of island big, small and everything in between. Bali is of course the most popular and well known, but in this archipelago of thousands of islands there are many more hidden treasures to be found. If you are looking for a holiday that takes you off the beaten track, there is sure to be an Indonesian island that makes the perfect destination for you.

Top 5 under the radar islands in Indonesia: Seraya Island, Flores 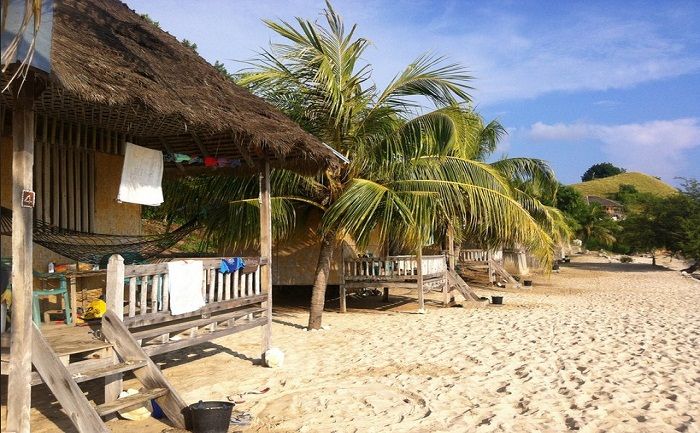 Bunglows on the beach can be hired cheap on Seraya Island. Photo by Stuart McDonald, flickr

Seraya Island, locally known as “Seraya Kecil” is a small, beautiful island off the western coast of Flores. It’s about as simple as it can get when it comes to accommodation, with a small selections of tiny beach front huts to choose from, sporadic water and electricity supply, and no western style toilets. However, if you are looking for somewhere to completely relax and soak in natural beauty and simplicity, then there is no place better to be. The island 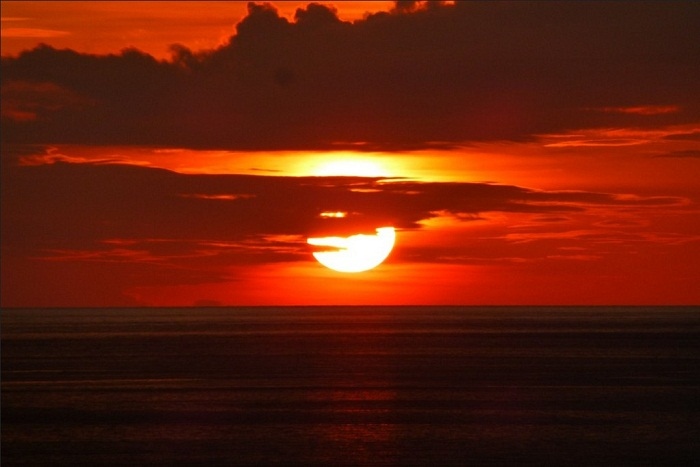 The sunsets are incredible on Seraya Island. Photo by Cliff, flickr

is a 50-minute boat ride from the main port of Flores, Labuan Bajo, which can be easily reached by airplane from Denpasar or Jakarta.

Although a small island, at 1.7km long and 200m wide, behind the beach the land quickly rises in hills and reaches its highest point at 42 metres. This provides the opportunity for short treks around the island, with 360 degree views of stunning ocean and other neighboring islands, and the perfect place to watch the sunset.

Canoeing, snorkeling, swimming, are other activities available and you can also hire a small motorboat to go and explore the close uninhabited islands.

Getting to the Gili islands is very easy from Bali. If you book your accommodation in advance, they will often organize the trip from Bali for you. Alternatively there are multiple com 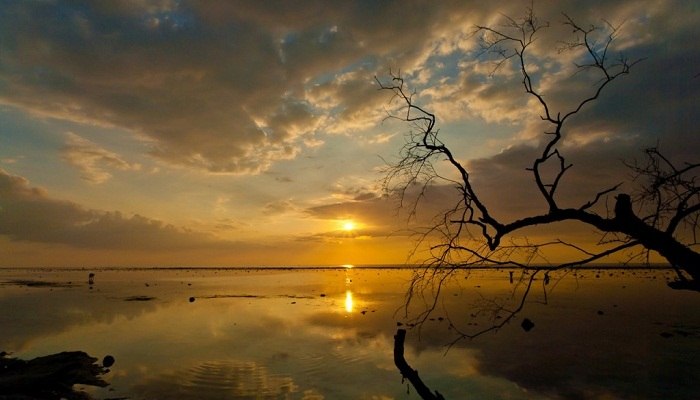 A spectacular sunset over the calm waters of Gili Trawangan. Photo by Buitenzorger, Flickr

panies that organize boat rides from various beaches. If you are on a tight budget, you can get a ferry to Lombok from Padang Bai on Bali’s eastern coastline, a taxi to the northern coast of Lombok, and then a quick ride on a small local boat to the islands. 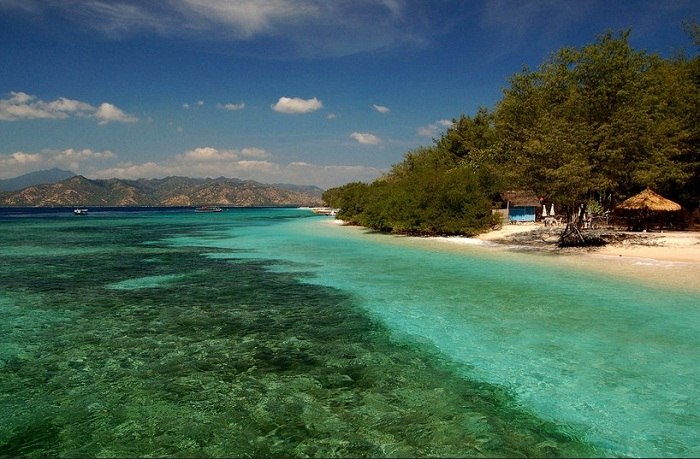 Paradise on the Gili Islands is just a stones throw away. Photo by Stefan Heinrich, flickr

The most famous island in the Gilis is Gili Trawangan, known for its nightlife as well as its great beaches. There is accommodation here for all types of travellers and the roadless island is a great getaway from the hectic Bali streets. There are two other Gili islands that are less frequented by tourists, Gili Air and Gili Meno, which are even less developed than Trawangan. Many of the guesthouses here operate without electricity and there are few places that offer the kind of tranquil environment that can be found here. 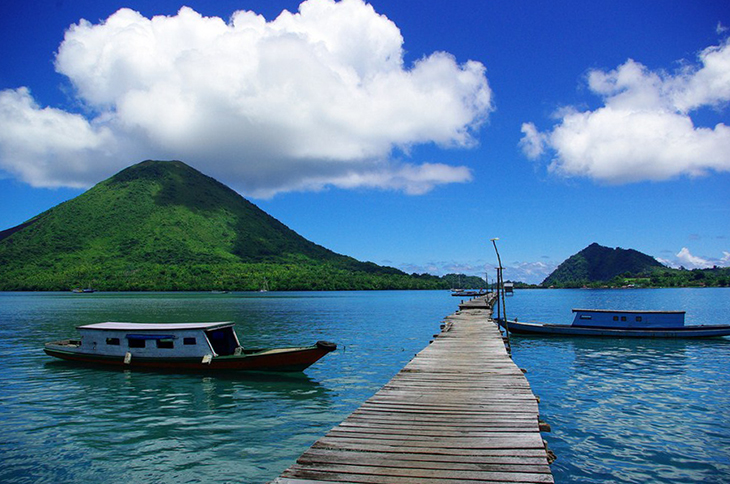 The volcanic Gunung Api can be seen from nearly everywhere in the Banda Islands. Photo by Jute, flickr

These 12 little volcanic islands in Maluku are a bit of a mission to get to, but as a result they remain authentic. History is rich here: While the rest of Maluku was involved in the cloves trade, Banda was the world’s only source of quality nutmeg – and after the Dutch took over, a series of events led to one of these islands being traded with the British for the island of Manhattan, New York. A highlight is Gunung Api (fire mountain), a volcano that can be seen from almost anywhere in the Banda islands.

The islands also had a role to play in World War II, when a number of forts were built in order to provide surveillance of the oceans. Many of these forts can still be seen in near perfect condition, including Fort Belgica, which lies amongst beautiful natural scenery. The main town is located on Bandanaira (also called Banda Besar) Island and there is a tiny airstrip here serviced by local Indonesian airlines. Flights can generally be found from Bali, Lombok and Timor but are infrequent, so take care to book well in advance. 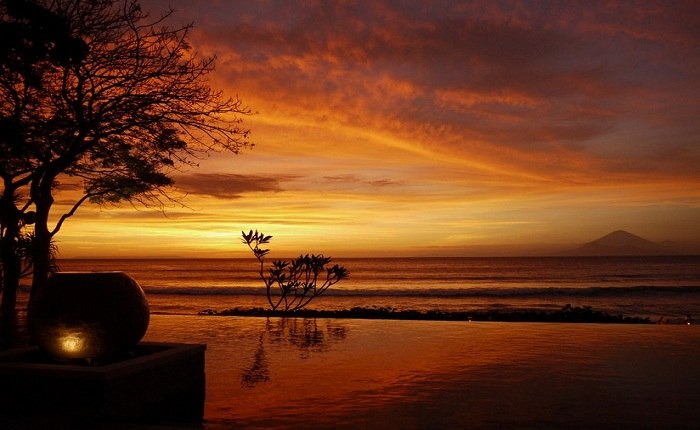 Sunset from an infinity pool in Lombok. Photo by Tim Willcox, flickr

East of Bali across the Lombok strait one of the deepest in the world, is Lombok, a relatively unspoilt and much bigger island than the more popular Bali. While Bali is a Hindu island, the Sasak people of Lombok practice Islam, and the culture remains largely unchanged by modernity. This is perhaps because tourism on the island has progressed slowly, and local families are opposed to international corporations.

Getting to Lombok is a simple plane trip. Lombok International Airport is located near the city of Praya in central south Lombok. International connections are currently limited to Singapore, Kuala Lumpur, and Perth. However, flights to Lombok from Bali are very frequent and inexpensive. 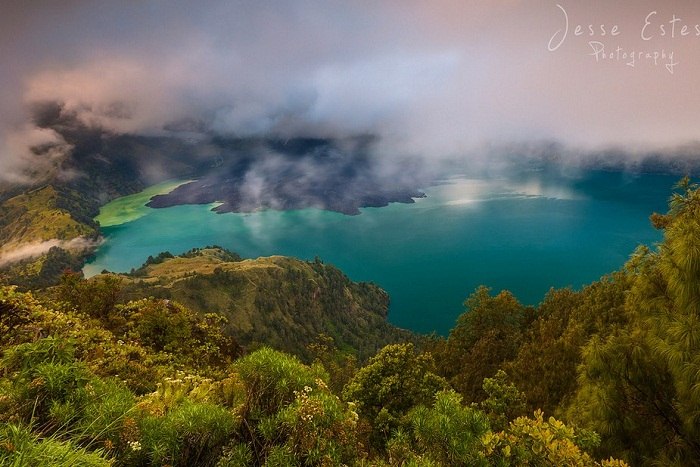 While in Lombok you can relax on untouched beaches and enjoy a traditional Sasak massage, go snorkelling with turtles, surf one of the best breaks in the world, or climb Mt. Rinjani, a 3726m high active volcano. Lombok is also one of the best places in the world for pearl shopping. 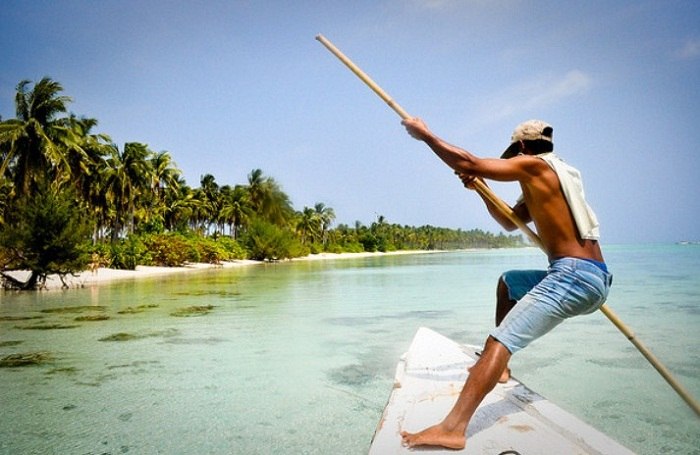 Local gone fishing off the island of Karimunjawa. Photo by Colm Fox

The Karimunjawa archipelago is a chain of 27 islands off the coast of Java. Many of the islands in this chain are very small and uninhabited and have rarely been frequented by foreigners. The largest islands are Karimunjawa Island, which is quite hilly and steep, and Kemujan Island, where there is a 900m airstrip. The two islands are connected by a bridge and feature amazing reefs and animal life including deer, birds, and snakes.

Menjangan Besar and Menjangan Kecil (big and small), are smaller still with white sand beaches all around the perimeter. Some of the smaller islands are entirely made up of white sand. There isn’t a whole lot to do other than bask in the sunlight and swim in the glorious aqua water, but boats may be rented for a very affordable $35usd a day to explore all the nearby islands, and diving can be organized through companies on the island. You can also rent bicycles and motorbikes on either of the main islands to do some exploring.

The best way of getting there would be to fly to Dewandaru airport on Kemujan Island from Semarang.