What to do in Wellington City in New Zealand

What to do in Wellington City

Surrounded by ocean and hill, Wellington merges big city culture with small town charm and lively energy pulses through what is celebrated as New Zealand’s artistic and culinary capital. With just under 400,000 residents, Wellington is the second most populous urban area of New Zealand and balances a modern cityscape with untouched natural beauty. 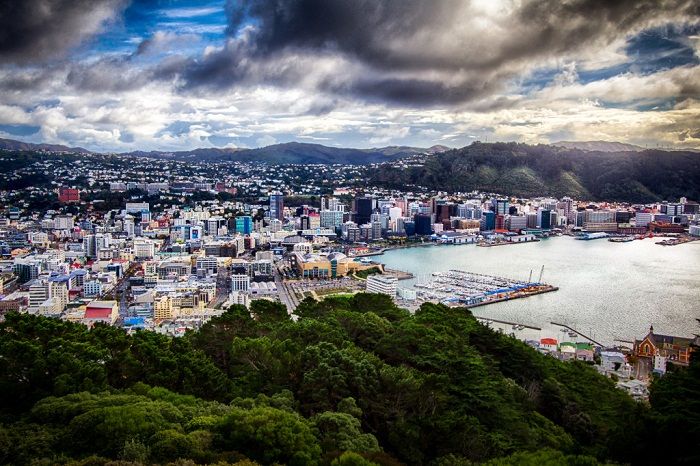 Wellington is located at the south-western tip of the North Island on Cook Strait, separating the North and South Islands. Its exposure to the winds blowing through the Strait created its nickname “Windy Wellington”, and for good reason. Ask any local about Wellington weather and you’ll soon discover it is commonplace for Wellington to have four seasons in one day. While the weather is rather unpredictable, Wellington city can’t be beaten on a clear, sunny day – meaning the best time to visit is during spring or summer, between the months of September and March. 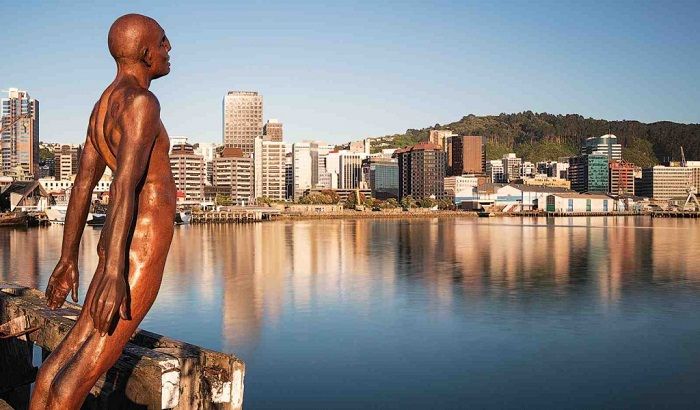 Take a stroll along Wellington’s waterfront. Photo by victoria.ac.nz

The narrow entrance of Wellington harbour contains the dangerous shallows of Barrett Reef, where many ships have been wrecked – the most famous was the inter-island ferry ‘Wahine’ in 1968. Wellington harbour has three islands: Matiu/Somes Island, Makaro/Ward Island and Mokopuna Island, but only Matiu/Somes Island is large enough for habitation. It has been used as a quarantine station for people and animals, and was an internment camp during World War I and World War II. It is a conservation island, providing refuge for endangered species, and can be accessed by the public via the Dominion Post Ferry. 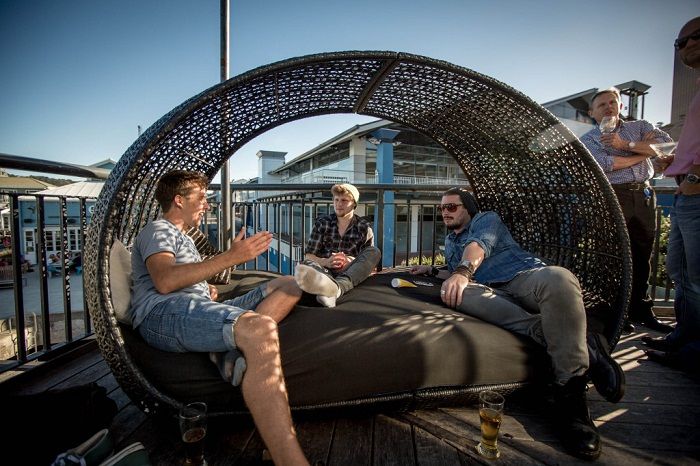 Foxglove Bar and Restaurant on the waterfront. Photo by no-surcharge.co.nz

Wellington is known as a socially and environmentally conscious city. Declared nuclear weapon free over 30 years ago in 1982, it was also the first capital city in the southern hemisphere to gain Fair Trade status. There is a network of bush walks and reserves maintained by the Wellington City Council and local volunteers, and the Wellington region has 500 square kilometres of regional parks and forests to explore.

Long celebrated as New Zealand’s arts and culture capital, Wellington is home to the country’s major arts institutions such as Royal New Zealand Ballet, NZ Symphony Orchestra and Te Papa Tongarewa – the National Museum of New Zealand. It is home to Weta Workshop which is the mastermind behind critically acclaimed films like The Lord of the Rings, King Kong, Avatar, and many other international blockbusters.

Every September Wellington showcases WOW; World of Wearable Art attracting an audience of over 50,000 people to the shows. This is one of Wellington’s success stories for the last 25 years, combining fashion and art. 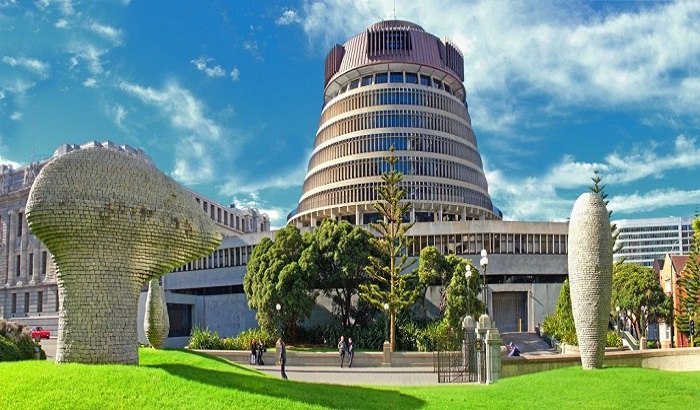 Home to New Zealand’s parliament building nicknamed the “beehive” for its unique design, the central business district is Wellington’s economic engine-room and community meeting place. Boutique and high street shopping can be found down Lambton Quay and the surrounding streets, while the bohemian quarter is found on Cuba Street.

Find out why it’s the culinary capital of New Zealand 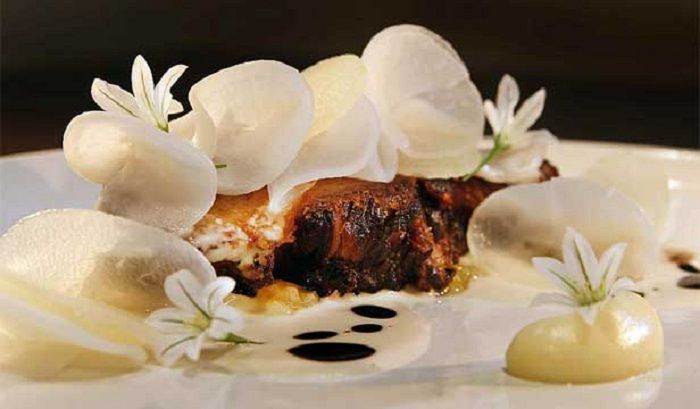 Try the award winning cuisine at Matterhorn. Photo by stuff.co.nz

Wellington restaurants have taken out the supreme Cuisine Restaurant of the Year award more times than should be fair. Tucked between two of New Zealand’s finest wine and producing areas, the city is part of a region of exceptional taste. Wellington is said to have more bars and restaurants per capita than New York, and is considered the craft beer capital.

Have a coffee on Cuba

Cuba Street was named after an early 1840 settler ship of the same name, not an island country in the Caribbean, but a few of the street’s residents have since run with the latter theme. Fidel’s Café at 234 Cuba St is one of many tasty spots locals love to chew the literal and philosophical fat. Just around the corner on Wigan Street is Havana, a local favourite for tapas, cocktails and live music. 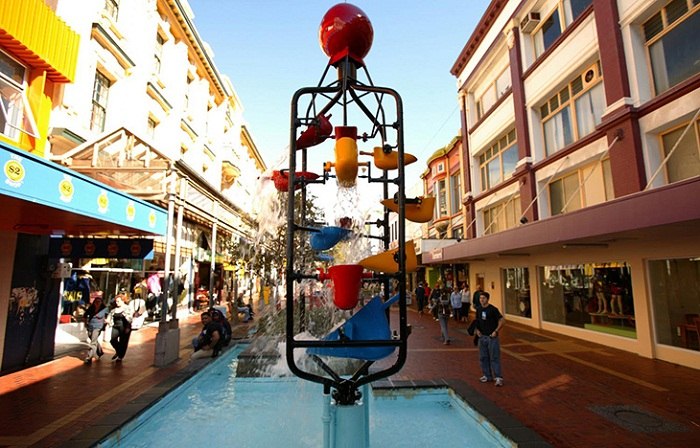 Cuba Street is a creative and culinary melting pot of buskers, art galleries, graffiti-filled alleyways, cool cafes, nationally acclaimed restaurants, and community exhibition spaces. The “bucket fountain” is an icon of Cuba Street, reflecting the quirkiness of the area well. Cuba Street is a meeting of minds, menus, and culture, and is the best place for vintage shopping in New Zealand – thanks to a trail of second-hand boutiques.

Tucked down a quiet corridor at number 106, Matterhorn is Cuba Street’s most famous bar. With more awards than you can shake a cocktail at, the Matterhorn is a well known and a must see while exploring the area. Try a few signature cocktails off their extensive list and enjoy their fine cuisine. 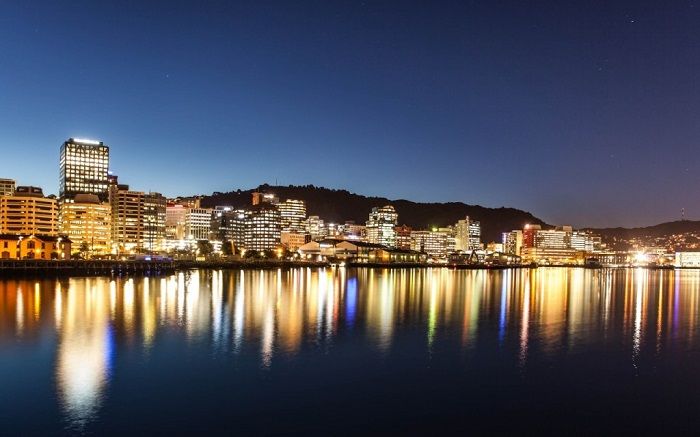 Wellington’s nightlife is best known for its trail of stylish cocktail bars tucked away in the city’s corners. The entertainment district of Courtenay Place is packed with dance clubs and pubs, while those looking for live music from local indie bands should head to Cuba Street. Every weekend is a raging party in Wellington City – not to mention “student night” which takes place each Wednesday. 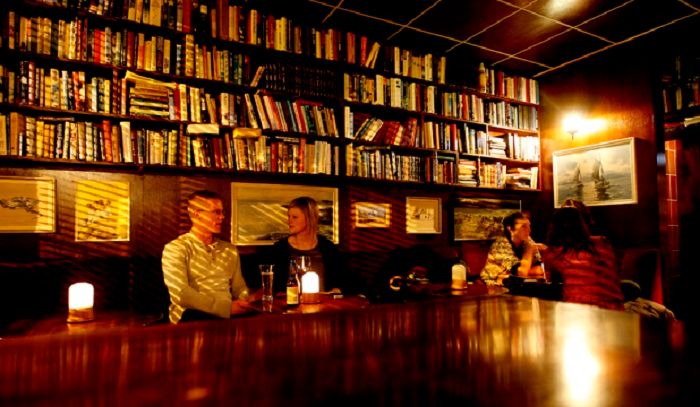 Have a cocktail and read a novel or two at the Library Bar. Photo by stuff.co.nz

The city’s entertainment and theatre district is centered around Courtenay Place, Blair and Allen streets. Start with The Library, a lounge bar where cocktail vouchers can be found hidden within the leaves of books. Malthouse is a must for craft beer fans, and the New York loft-style Apartment and Bangalore Polo Club are also popular spots. Four Kings is New Zealand’s leading sports entertainment venue and has more than 70 plasma and LCD screens – perfect for watching the rugby or having a flutter on the horses. 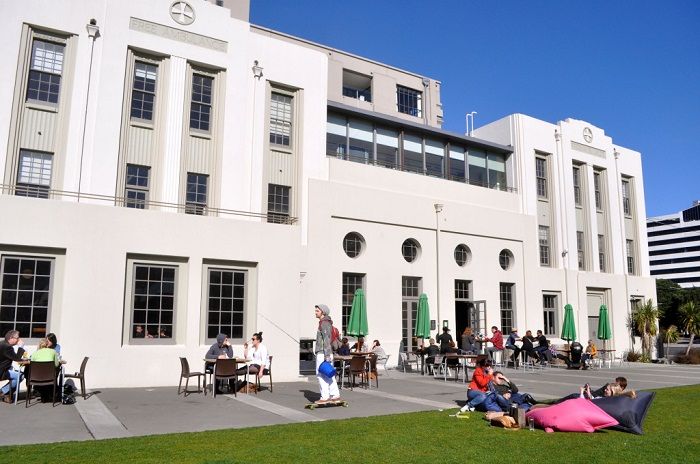 When the sun’s out, grab a bean bag at St John’s Bar, or an outdoor table at Foxglove on the waterfront. Enjoy views of the harbour with a cocktail or craft beer in hand, and appreciate Wellington city on a beautiful day. 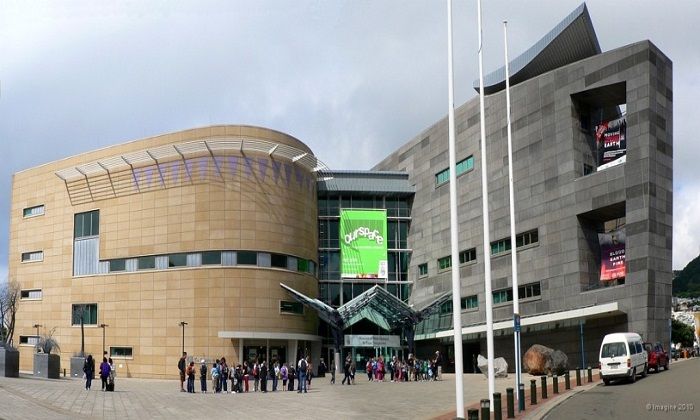 Te Papa is New Zealand’s national museum renowned for being bicultural, scholarly, innovative, and interactive. The Māori name, ‘Te Papa Tongarewa’, literally means ‘container of treasures’, which is what you will find inside the gigantic museum. Find out about the history of New Zealand and Maori culture at Te Papa, located at 55 Cable Street. Admission is free, visit http://www.tepapa.govt.nz/ for more information.

Watch a game at the Stadium 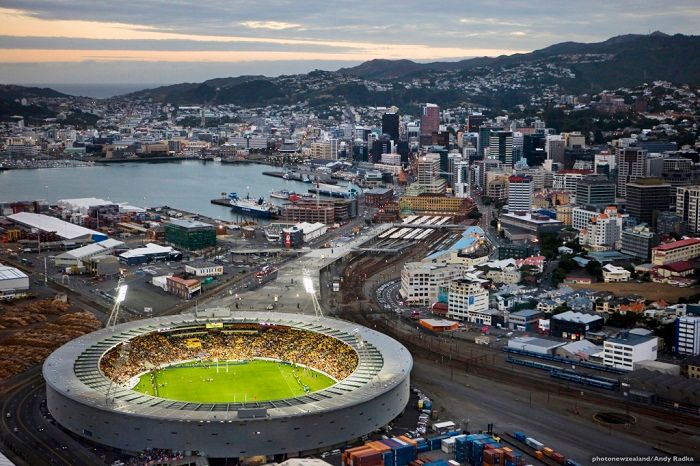 Wellington Regional Stadium – commercially known as Westpac Stadium – is a major sporting venue in Wellington with 34,500 seats. Due to its round shape and silver colour, it is known as “The Cake Tin” to Wellingtonians, and hosts sports games, expos, and concerts. The stadium was opened in 2000 and is a five minute walk from the train station. If you can’t make it to a game you’re bound to drive past it a few times while in the area – it can’t be missed.

Take a ride in the Cable Car

Take a ride on the iconic Cable Car. Photo by zoom.me.com

The Wellington Cable Car is a funicular railway located between Lambton Quay, the main shopping street, and Kelburn, a suburb in the hills overlooking the central city. It is widely recognised as a symbol of Wellington and any trip to the city wouldn’t be complete without a ride of the Cable Car. Have a coffee at the cafe at the top and walk around the beautiful park, there’s also an observatory which is a popular tourist attraction. 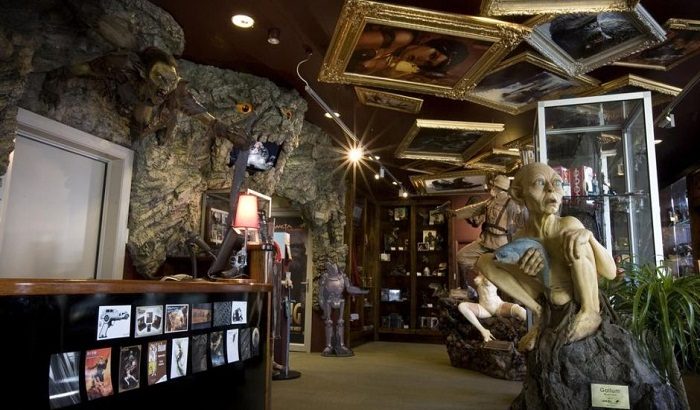 The Weta Cave Workshop Tour is a movie based visitor experience in the heart of Miramar, Wellington. Guided tours start and finish in the famous Weta Cave and provides a unique behind-the-scenes glimpse into the workings of Weta Workshop. The story of the creative process is told by members of the crew from the workshop floor using the props, models, and weapons they helped make for the movies. A tour takes approximately 45 minutes and costs around $20 USD per person. Located at 1 Weka St, Miramar, Wellington, Visit http://www.wetanz.com/cave/ for more information.

Spend a day at the Zoo 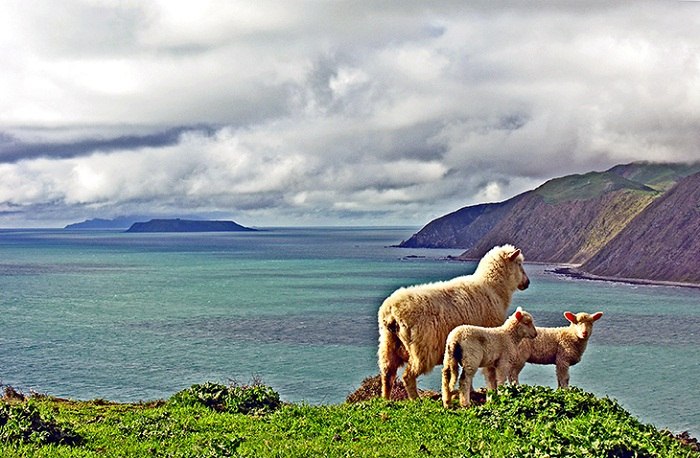 The city is balanced with nature. Photo by wikimedia.org

Now over 100 years old, Wellington Zoo was New Zealand’s first Zoo and has 13 hectare dedicated to over 100 different species of fauna from across the globe. From $20USD per person, expect to see cheeky Meerkats, Red Panda, Monkeys, Giraffes, Bats, Kiwi, and more. Located at 200 Daniell St, Newtown.

The CQ complex of Comfort Hotel and Quality Hotel is set within a stylish heritage building in the heart of Cuba Street. Nestled between local boutiques and a few steps away from Cuisine Restaurant of the Year 2009 Logan Brown, this is the perfect location for those to base themselves in the cultural heart of the capital. Rooms start from $100 USD per night for two people. Located at 213-233 Cuba Street, visit http://www.hotelwellington.co.nz/ for more information. 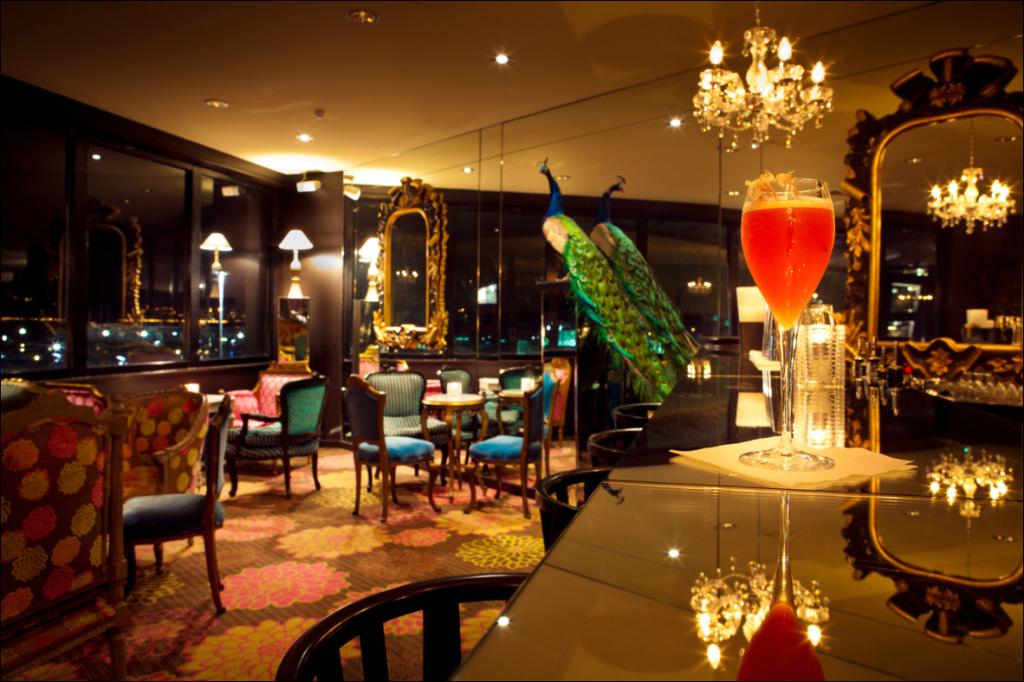 The Museum Art Hotel is luxurious, artistic, and has plenty of character – not to mention it’s one of the largest buildings to have been moved from one site to another. Weighing an estimated 3,500 tonnes, this reinforced concrete building was moved from its original site, now the location of the Te Papa Tongarewa Museum, to 90 Cable St 180 metres down the road. The relocation started in May 1993 and was completed just over five months later. Stay here from $180 USD per night, visit http://www.museumhotel.co.nz/ for more information or to book.