Where to find the best places to stay in Dubai

Dubai, a city located in the United Arab emirates, is growing at an exorbitant rate in both construction and tourism. Some of the most impressive and spectacular architectural projects have been and are continuing to be erected at a rapid rate throughout the city. Not only is it the only place in the world to have a seven-star hotel, it also boasts the world’s tallest building and a series of 200 man-made islands in the shape of the countries of the world. Read on to see where to find the best places to stay in Dubai.

If you’re looking at holidaying in Dubai it is unlikely you’re going to be penny pinching. So why not go all out and travel in absolute style with a private first class suite aboard the international airline of the UAE, Emirates Airlines. 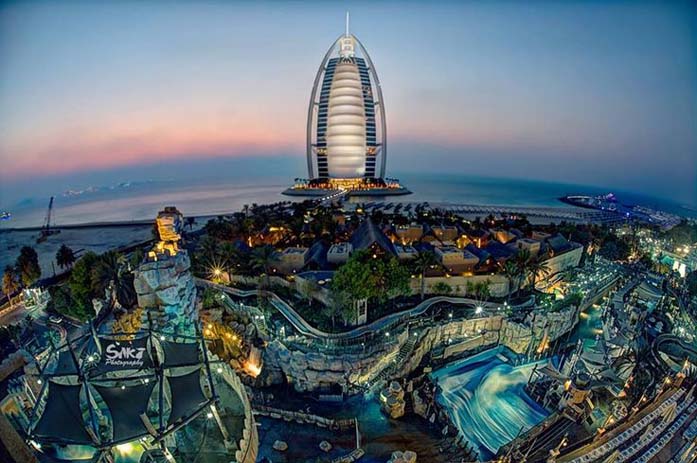 The Burj Al-Arab is named as “Tower of the Arabs” in Arabic. This luxury hotel is touted as “the world’s first seven-star hotel” and was one of the most costly structures to have ever been built. The hotel does not have ordinary single rooms; rather it’s divided into over 200 duplex suites. It is one of the most expensive hotels in the world to stay in so you might need to take out a 2nd or 3rd mortgage to be eligible. The prices can range from $1,000 to over $15,000 a night!

(At night, it offers an unforgettable sight, surrounded by choreographed colour sculptures of water and fire.) 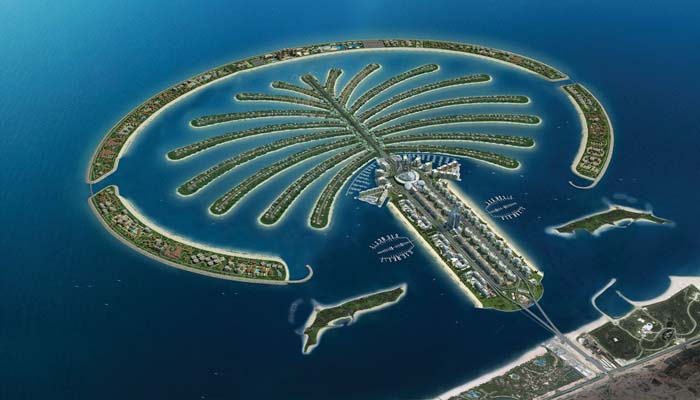 Palm Islands in Dubai are meticiosuly shaped like a palm tree. Photo by Interesting Engineering

This is the Palm Islands also known as the Palm Dubai and The Palms. These islands are built in a shape of a date palm tree and consist of a trunk, a crown with fronds, and are surrounded by a crescent island that acts as a breakwater. Only one (Jumeirah Palm) of the three man-made islands are completed to date but there are a number of places to stay including the Atlantis Hotel, which features an aquarium, waterpark and dolphin bay just to name a few. Palm islands are heralded by the UAE government as the Eighth Wonder of the World. 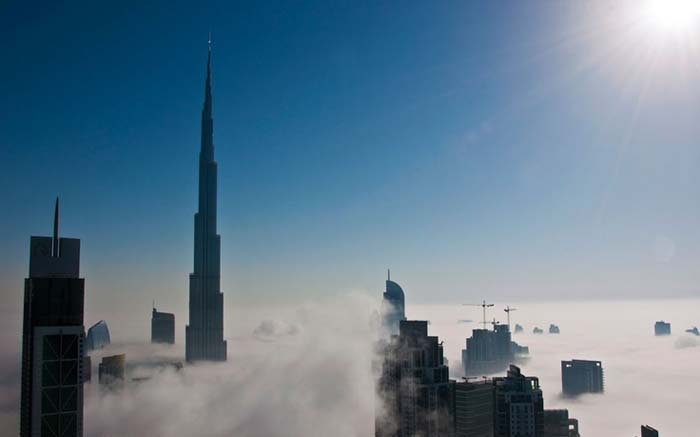 This is the largest skyscraper in the world and is the crown jewel of the Gulf regions most significant urban development, entitled Downtown Dubai.

From excavation to completion the Burj tower took only 6 years to build with up to 12000 workers working at one time at the peak of construction. The tower is a whopping 828 metres tall with more than 160 stories. Its design was influenced by the six petal desert flower as well as incorporating patterns found within Islamic architecture.