10 of the best beach towns in Italy

It’s an incredible feeling when you see landscapes fit for an oil painting; little coastal towns which would otherwise only be seen in a Bob Ross gallery. Along the best beach towns in Italy you’ll see cliff faces scattered with small houses looking over the sea. Take a boat ride, make friends with locals and taste the food. After all, it’s about creating oil painting memories on an infinite canvas. 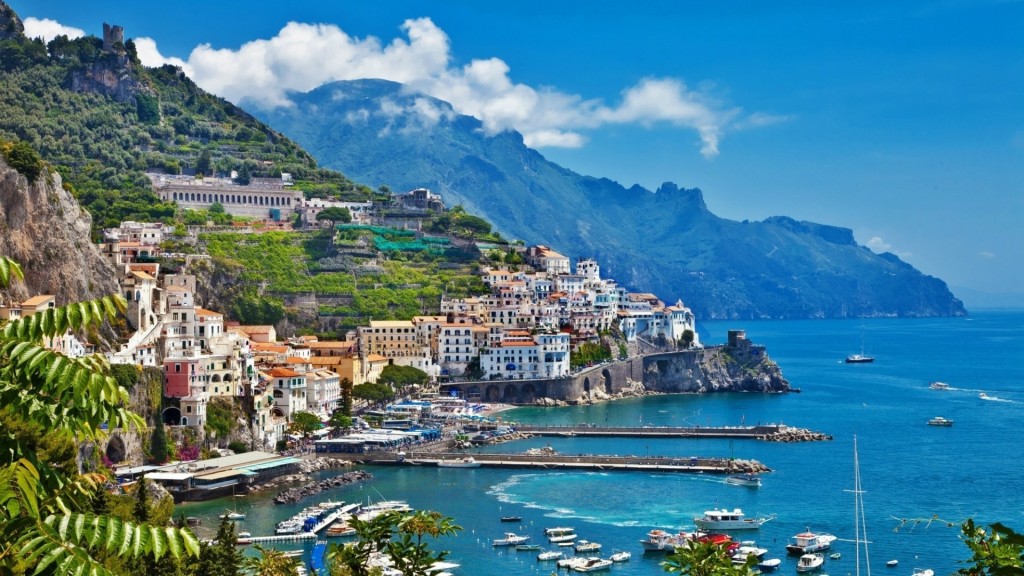 Up first on the list is Amalfi, and for good reason. The coastal town of Amalfi looks like an oil painting. The houses lean upon cliff-sides and gaze upon the harbour, and the town has a fine balance between old buildings, green hills, and the sea. Hire a small motorboat in Amalfi harbour for an affordable way to explore the coast.

Amalfi is a town in the province of Salerno, in the region of Campania, Italy. It lies at the mouth of a deep ravine, at the foot of Monte Cerreto, surrounded by dramatic cliffs and coastal scenery. It is the main town of the coast on which it is located, named Costiera Amalfitana, and is a popular tourist destination together with other towns on the same coast, such as Positano, Ravello and others. 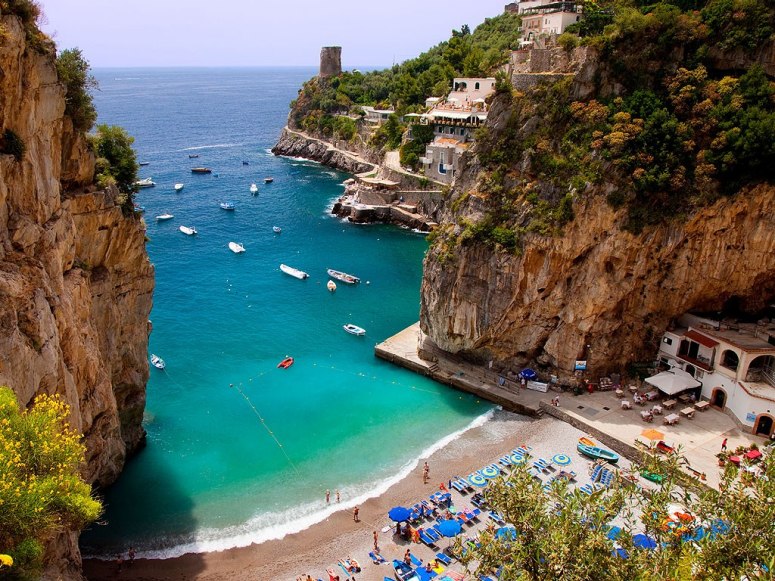 Praiano is another must-see beachside town. It boasts beautiful beaches like Marina di Praia and Gavitella, ancient churches, towers, and sacred sculptures. It is situated on the Amalfi Coast, a prime tourist location for the region and Italy alike, between the towns of Amalfi and Positano.

One popular attraction is the Church of San Luca Evangelista, dating back to the 12th century. On the inside, there are paintings by Renaissance painter Giovanni Bernardo Lama that are over 400 years old. Another attraction is the Church of San Giovanni Battista, featuring a well-preserved majolica tiled floor, dating back to the 12th-13th centuries.

MORE: DINING ON THE EDGE OF A CLIFF AT THE GROTTO PALAZZESE 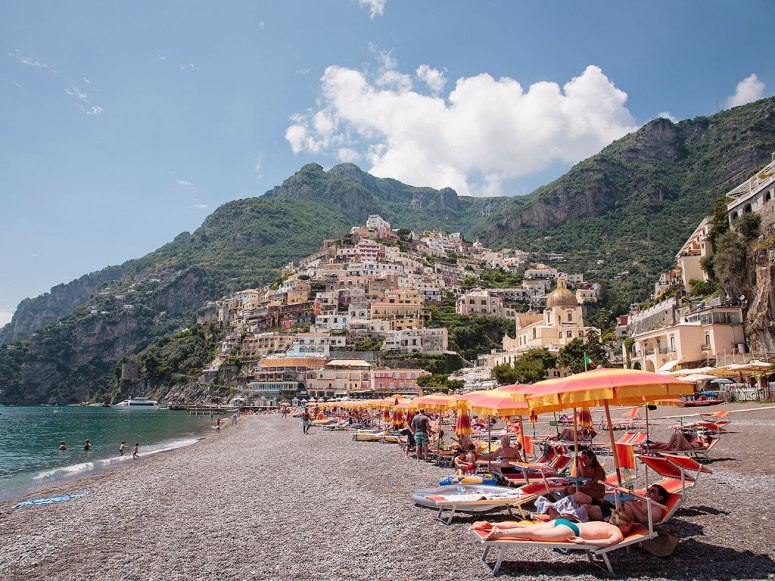 Nestled on the Amalfi Coast, the popular fishing village of Positano is famous for its picturesque harbor, elegant, Moorish-style architecture, and for being frequently visited by celebrities such as Denzel Washington, Tom Cruise, and Mick Jagger.

Positano has an impressive beach and is great for boutique shopping. The village is a smart base for exploring the area, as popular attractions such as Capri, Ischia, and the Grotta dello Smeraldo cave are a short boat ride away. 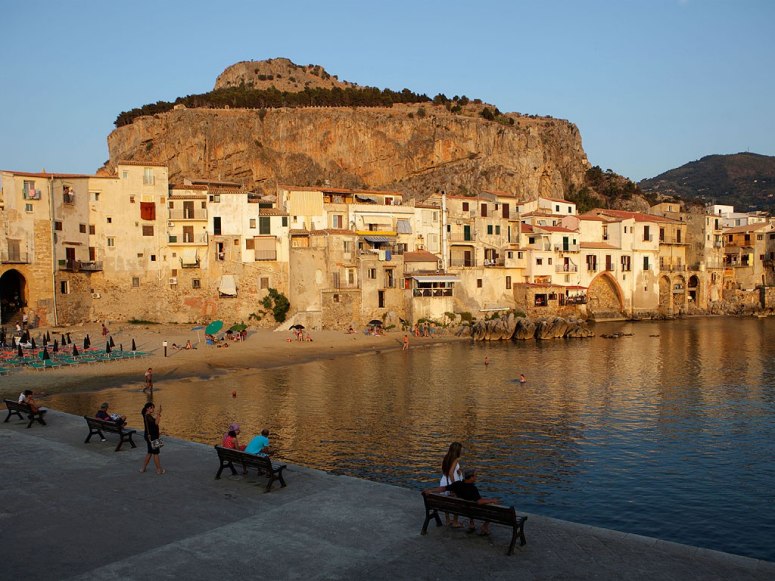 Wedged between mountains and coastline, the idyllic town of Cefalu is small but popular for its sandy beaches, Sicilian restaurants, and vibrant nightlife scene. In summer the population of Cefalu can triple, making the main streets and major roads in the country crowded, but give it a youthful atmosphere and an impressively lively night life.

Cefalu is in the Province of Palermo, located on the northern coast of Sicily, on the Tyrrhenian Sea. The town, with its population of just under 14,000, is one of the major tourist attractions in the region. Despite its size, every year it attracts millions of tourists from all over Italy and Europe. 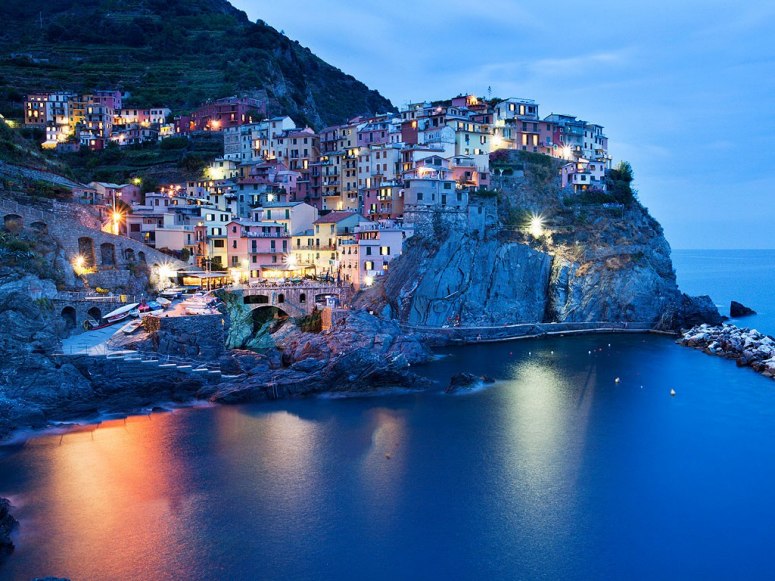 Manarola is one of the oldest towns in the Cinque Terre. It’s known primarily for its fishing, wine-making, and excellent hiking in the hills and vineyards above the town. In recent years, Manarola and its neighboring towns have become popular tourist destinations, particularly in the summer months.

Tourist attractions in the region include a famous walking trail between Manarola and Riomaggiore (called Via dell’Amore, “Love’s Trail”) and hiking trails in the hills and vineyards. The local wine, called Sciacchetrà, is especially renowned, with references from Roman writings mentioning the high quality of the wine produced in the region. 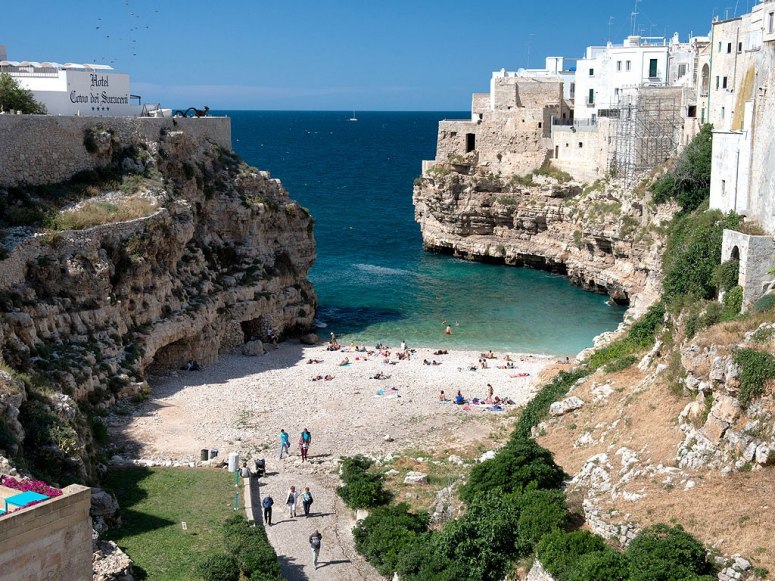 The town of Polignano a Mare rises out of a cliff face on the Adriatic Sea. In addition to breathtaking views over the Adriatic, the tiny town also boasts charming, white-washed streets, old churches, and a beach with warm turquoise waters, which is flanked on either side by cliffs.

Polignano a Mare is a town and commune in the province of Bari, Apulia, southern Italy, located on the Adriatic Sea. The local economy is mostly dependent upon tourism, agriculture, and fishing. 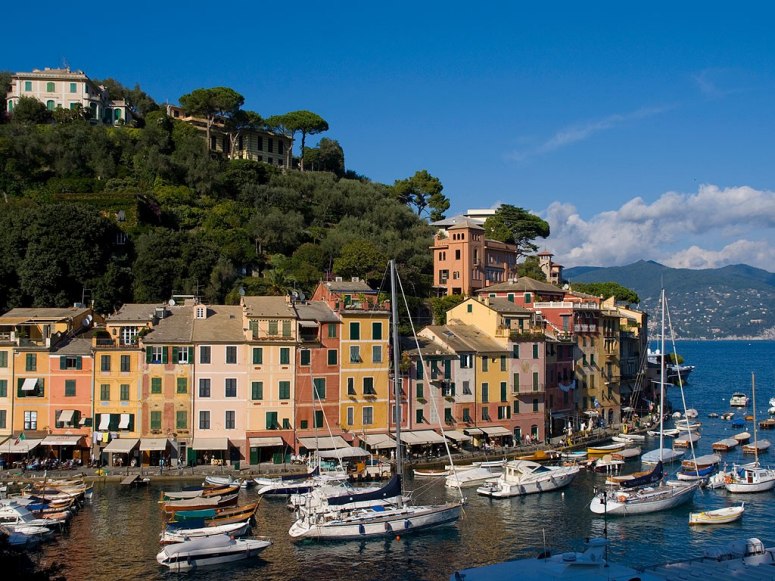 Portofino, Italy, is known as the resort of the rich and famous, but there is much more to see here than just people. Portofino is a picturesque, half-moon shaped seaside village with pastel houses lining the shore of the harbor, shops, restaurants, cafes, and luxury hotels.

The coastal town of Portofino is arguably one of the most beautiful European ports to sail into. It also is home to well-known hotels such as Hotel Splendido and the Grand Hotel Miramare, great shopping, and of course, a radiant coastline. Portofino sits on a peninsula in the Tigullio Golf east of Genoa in the northern Italian region of Liguria, and is part of the Italian Riviera. 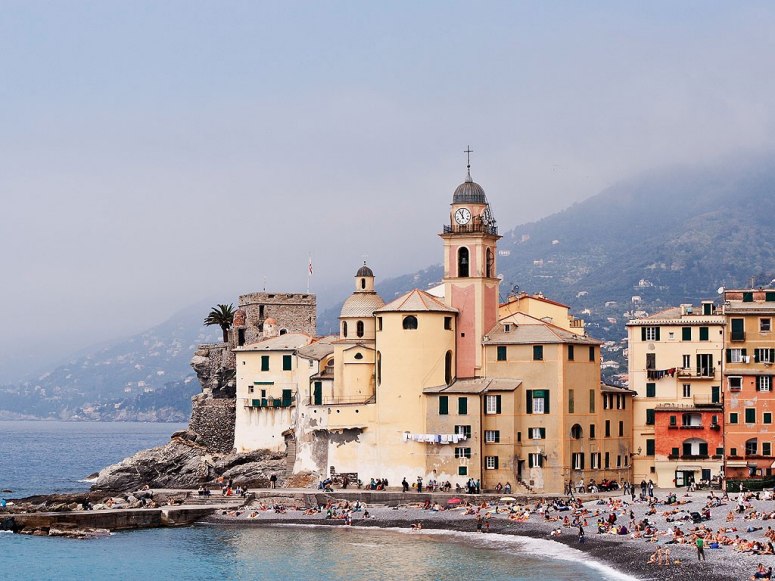 Camogli is a lively fishing village nestled on the Italian Riviera with pastel houses and a pebbly beach. It has a small harbor lined with shops and restaurants, a carousel near the water, and a big square where children can play and adults can sip fine Italian coffee and people-watch.

Camogli is a short boat trip from the more famous and touristy Portofino, and visitors to Portofino should definitely check out this little gem. In the evening visitors can stroll down past the well-known pastel-painted houses to the numerous harbor side bars. Watch the sun set behind the village lighthouse before sampling the delicious local pasta – yum. 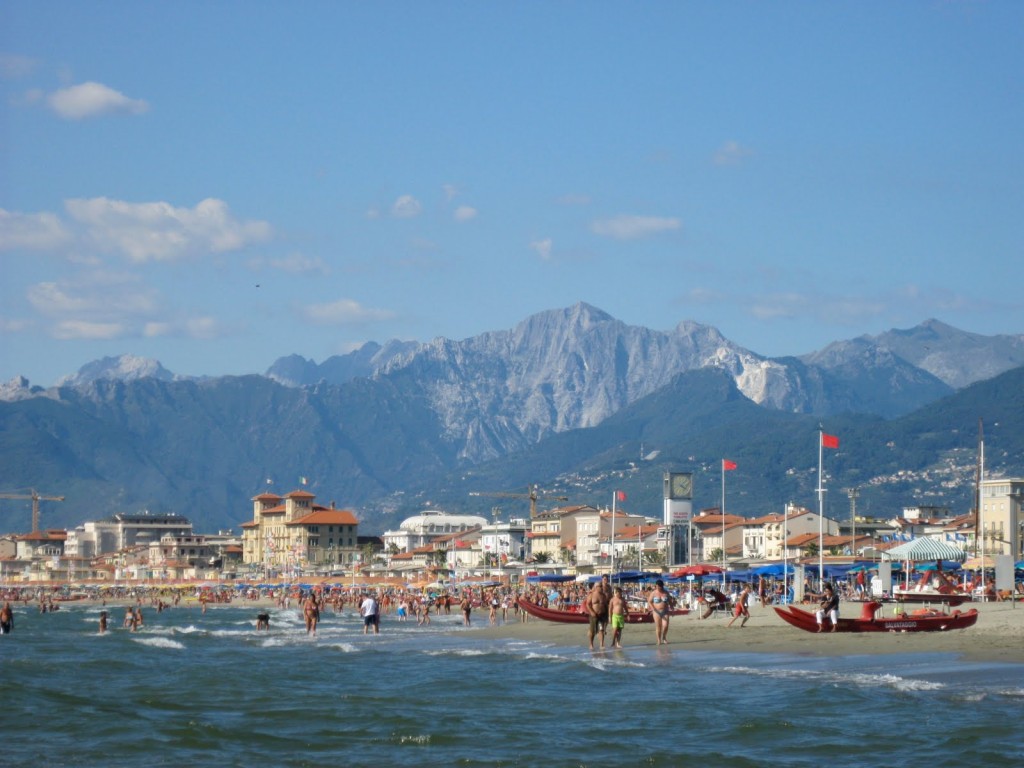 Viareggio is a city in northern Tuscany, Italy, on the coast of the Tyrrhenian Sea. With a population of over 64,000, it’s the second largest city within the province of Lucca, after Lucca city. The beach consists of about 10km of golden sand lined with beachside bars and restaurants. The short walk from the train station to the beach takes explorers past a variety of shops, restaurants, and notable architecture. 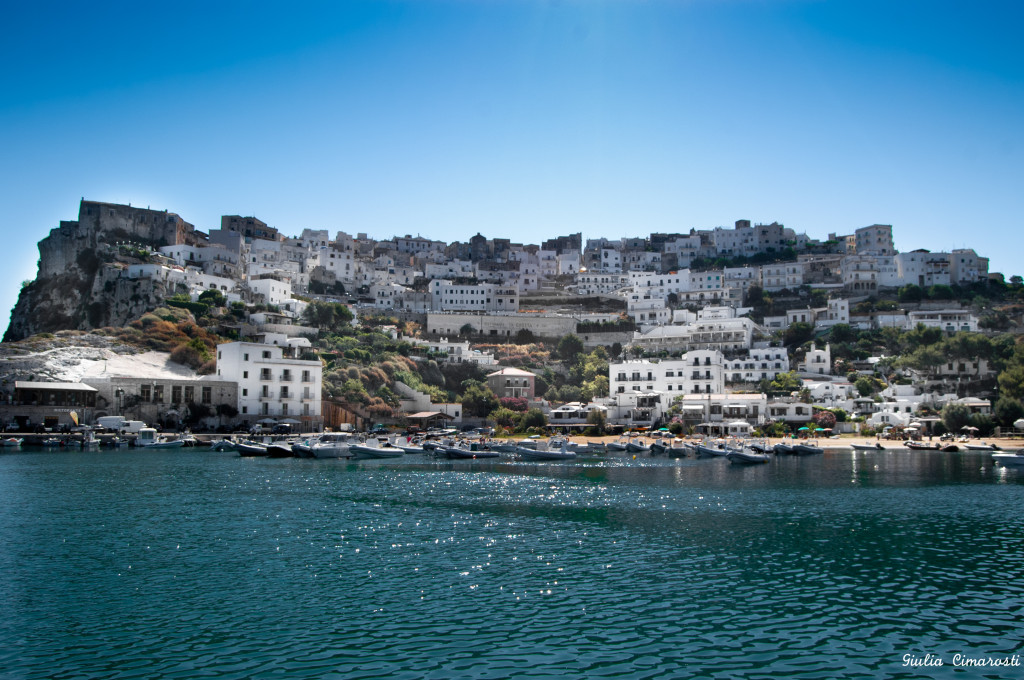 Peschici is a small beach town in the province of Foggia in the Apulia region of southeast Italy. The town itself sits over a karst spur facing the sea, with a height of more than 100m. The territory features a number of coastal watch towers, plenty of sandy beaches, water activities, shopping, and restaurants.