Eco sustainability is quickly becoming a hot topic in architectural design for the future, how we can better incorporate smooth, efficient man made designs and mesh them with the untamed, harsh yet beautiful properties of nature. 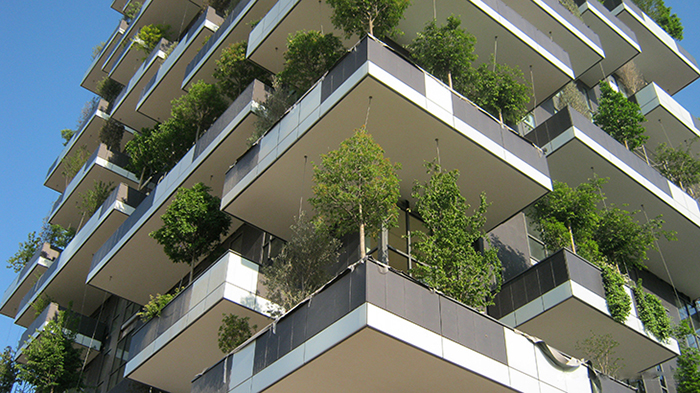 Imagine you want to live in the city, it’s handy, you’re close to your job and all the cool places you like to visit on the weekend. The only problem if you’re missing something, something natural, that being greenery, the smell of vegetation and the sound of wind through leaves.

In Milan, one of Italy’s most polluted cities, you can find the Bosco Verticale, Boeri Studio’s architectural design attempt to make a greener building for the urban lifestyle. Each proposed building can hold approximately 10,000 square metres of forest, greywater recycling will keep the trees and vegetation alive and photovoltaic panels provide power to the building. If you’ve ever wanted a home that was more attuned with nature, but still held the finesse of modern design, this is where you should live. 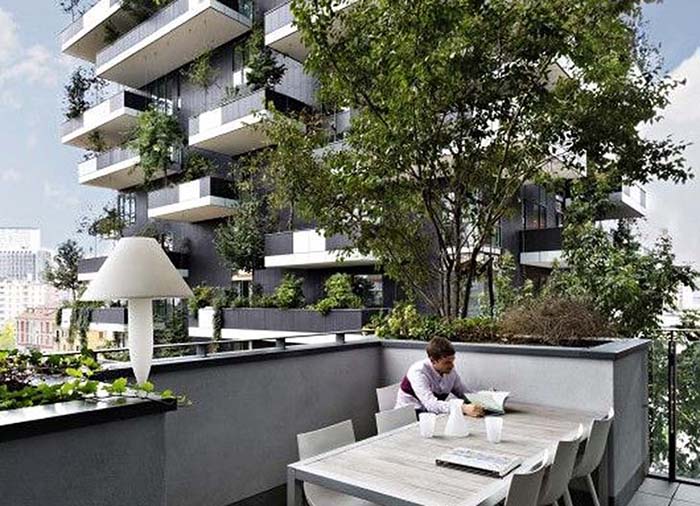 If youve ever wanted a home more attuned with nature. Photo via takepart

Stephan Boeri is the head architect and designer behind the building and while he has lived in the city his whole life is a self-described nature loving country boy.  He says that when he put forward his idea he was called crazy, not that it just be impossible generally but ridiculously expensive. The final estimated price for the towers actually only comes to about 5% more than that of any other relatively sized apartment block.

The first pair of sky scrapers being built are between 80 and 112 metres tall and can house 480 medium to large size trees, 250 smaller trees and 11,000 plants. This biological architecture took two years to conceive alongside many botanists and the trees have been specifically grown for the building. The vegetation absorbs the dust in the air and creates an adequate micro-climate for filtering sunlight and debris from entering the resident apartments. The management of the vegetation is under building regulation and will be taken up by the owners.

A mixture of small to large trees are planted on the balconies on all four sides of the towers and the diversity of the vegetation will provide habitats to birds and insects and assist in oxygen production amongst a crowded, polluted city. The plants will show difference shades depending on the seasons and absorb carbon emissions from the environment and protect the building from radiation. 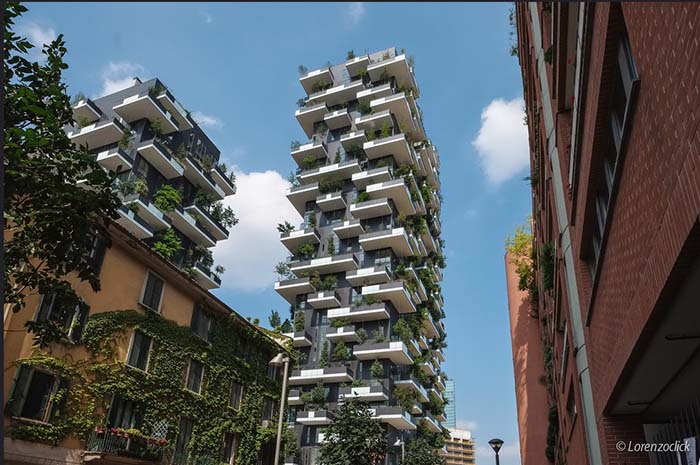 The tower also combats an ever increasing problem with living spaces, the urban sprawl. This is the concept that while everyone might have a house with a nice backyard and trees, the cities and towns become far spread out to be lived in practically. To combat this is high density living in apartment blocks, the problem with this is that there almost no space for vegetation. These towers solve this problem by reducing urban sprawl at the same time offering 10,000 square kilometres of forest.

The photovoltaic energy system optimises and produces energy making the project quite energy self-sufficient. The tower has properties from one-room compact apartments to penthouses and duplexes complete with balconies to allow room for the vegetation. A huge amount of energy is also saved on heating and cooling the building. During Winter when there are less the leaves more sunlight is let in warming the building, conversely in summer more leaves on the trees block sunlight but still let cool breezes in. As well as this soil acts as a great insulator.

The design is inspired by traditional buildings in Italy covered with ivy and features lush vegetation and reportedly costs only 5% more than a traditional skyscraper. Its completion is scheduled for the end of 2014, so soon we’ll be seeing humanity’s first attempt at tackling coexistence with nature on an innovative level. 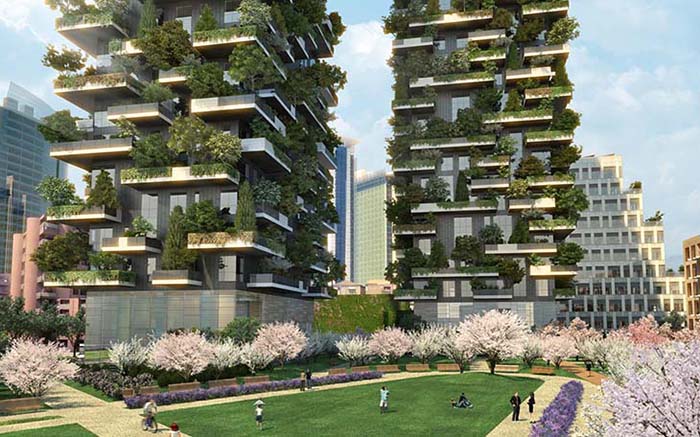 A concept design of Bosco Verticale. Photo via residenzeportanuova