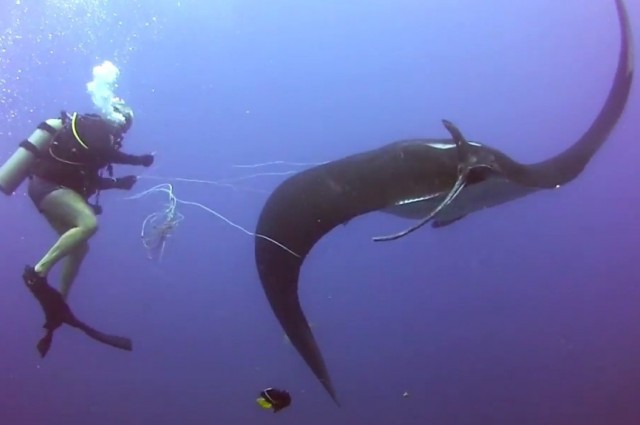 Divers in waters near Costa Rica have had an incredible encounter with a giant manta caught in a fishing line. The dive group was part way through their dive when a giant manta approached the group. They noticed the creature was entangled in a rope that was cutting into its flesh.

Then the most amazing thing happened. Instead of panicking, the manta swam towards the dive team in what appeared to be a plea for help. Divemaster Brian Thompson began to unwrap the line from its body by circling the Ray.

One of the divers remarked. “It was the first time I saw a manta ray. There was a very profound interaction between her and the diver,” Thomaz Monteiro, who was present for the surreal scene, told news outlet G1 Globo.

After the dive team quickly removed the rope from the manta, and reassured by the obvious lack of threat, the ray lingered around for 30 minutes before disappearing into the depths. This display of generosity demonstrates a remarkable symbolic notion of man befriending nature.

“I felt so strong a love for her and happiness to know that she was free and could enjoy her life again,” said Thompson.

This story was picked up by IFL Science and was originally reported by thedodo.com. You can read the original article here.