8 of the most powerful volcanic eruptions that will astound you

The most powerful volcanic eruptions have happened all over the world. While it is scary to see the damage they have left, they have also provided some beautiful locations for us travellers to swoon over. 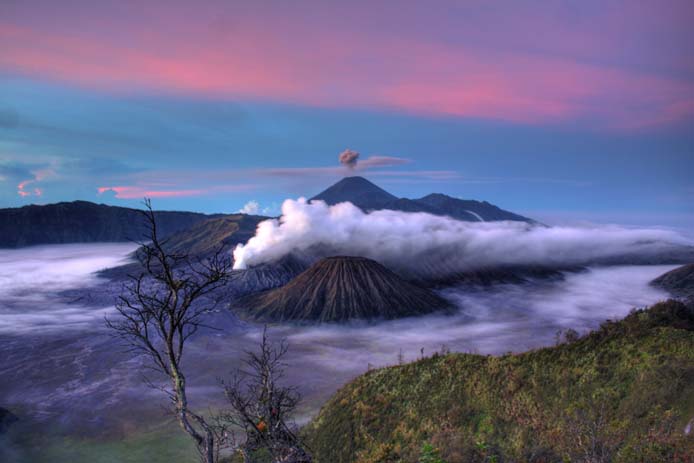 Mount Bromo and the surrounding volcanoes which are part of the Tengger Caldera, Java Indonesia. Photo by Michael Day, flickr

Mount Bromo is an active volcano located in East Java, Indonesia. It stands at over 2,300 metres tall, and is one of the most visited tourist sites in Indonesia. The most recent eruption occurred in 2011, and Bromo still exists at an active status. Mount Bromo is the smaller section of the Tengger Caldera, which is a basin crater full of sand, which exists because of collapse of a 4500m high strato-volcano.

It’s suggested that travellers head to the viewpoint for Mount Bromo early in the morning to see the sunrise over the Tengger Caldera as the sight is truly magnificent. 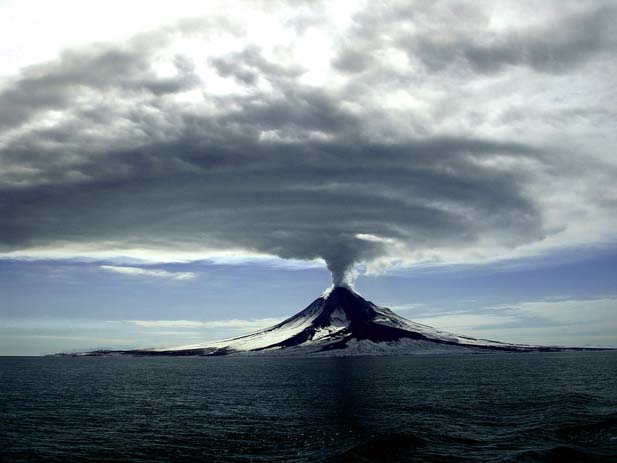 Located at the Cook Inlet in southern Alaska is the Augustine Volcano, a lava dome that erupts, leaving the island mainly made up of scattered debris. In total the island of Augustine has a land area of just under 84 km. The volcano has been active for thousands of years – some of the rock is to 40,000 years old.

The last eruption occurred in 2006 and it’s not uncommon for eruption and activity to cause large avalanches in the area.

Puyehue and Cordon Caulle are two volcanoes that exist within one another, creating a mountain in the Andes Mountain region of Chile. The volcanoes are located on the intersection of a traverse belt, meaning there is always a considerable activity in the area.

The most recent eruption was between 2011 and 2012. To this day, there are over ten recorded eruptions – these records don’t include small eruptions or the let off of sulphur. The area is fairly popular for hiking, due to the interesting craters and other volcanic landforms that have developed over the years.

MORE: 20 OF THE COOLEST WATERFALLS FROM AROUND THE WORLD 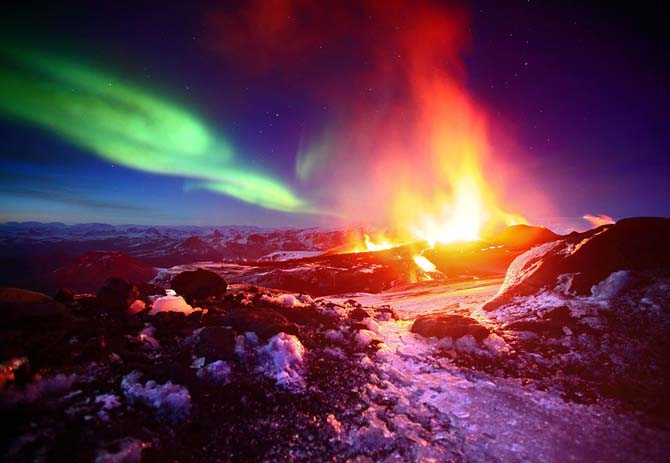 The Fimmvorduhals volcano in Iceland erupts under the Northern lights. Photo by James Appleton

The Fimmvorduhals is a popular walking track in Iceland, as there are many mountains and beautiful waterfalls to view along the walk. However, the tracks are only open during the summer months of June and August, so keep that in mind if you decide to visit the volcano.

The most recent eruption of the Eyjafjallajokull volcano was in 2010, and it created a number of craters in the area, as well as a fissure vent which sparked more eruptions weeks later. The eruptions were caused by small earthquakes which occurred underneath the surface at the Eyjafjallajokull glacier. Overall, the area is still prone to eruptions, which are small in size but can often cause avalanches due to heavy snowfall in the area. That doesn’t stop people from hiking around the stunning surrounds. 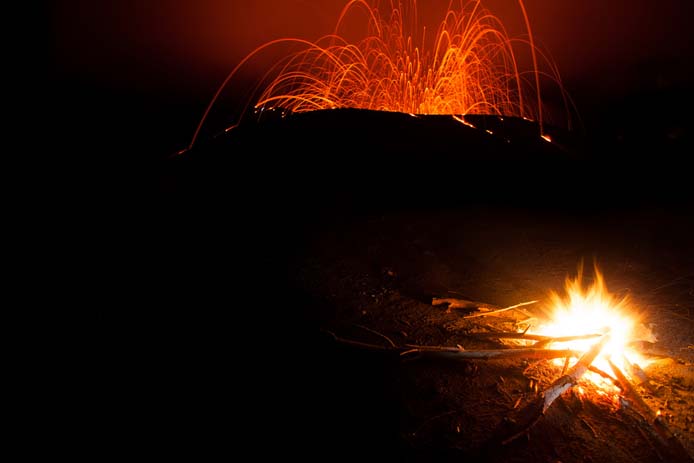 The eruption of Mount Yasur in Vanuatu. Photo by U.S Geological Survey, flickr

An active volcano located on Tanna Island in Vanuatu, Mount Yasur is 361m above sea level. The last recorded eruption in 2006 but eruptions are sporadic, and so the volcano is fairly accessible to tourists. The government monitors the level of tourism, offering different restrictions depending on how active the volcano is.

If you decide to visit Vanuatu, make a day trip to Mt Yasur where you can go hiking on the mountains and around the craters of the area. 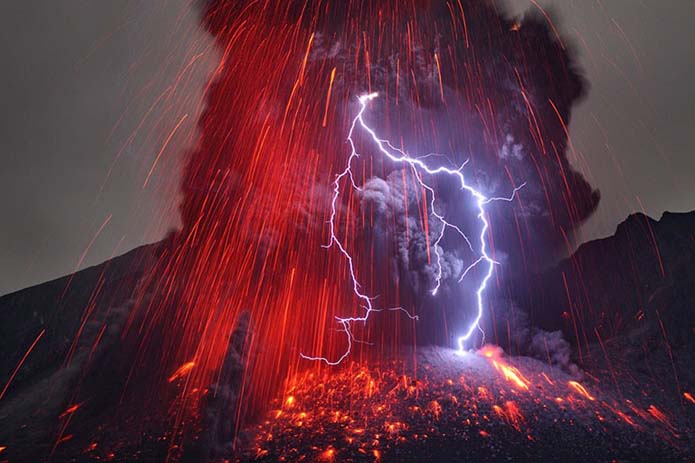 An electric eruption of the Sakurajima in Japan. Photo by Martin Rietze, via coolstuffdirectory

Sakurajima is an active volcano located in Kyushu, Japan. The volcano is currently being held at a Level Three Orange alert, which means that the volcano is considered active and should not be approached.

The volcano can be viewed from a distance on the water. The most recent eruption was in 2010, and there have been a number of eruptions before this time – each of which has been destructive to the towns surrounding the area. Volcanic activity following the 2010 eruption ran up until late 2013, which is why the volcano is on watch. 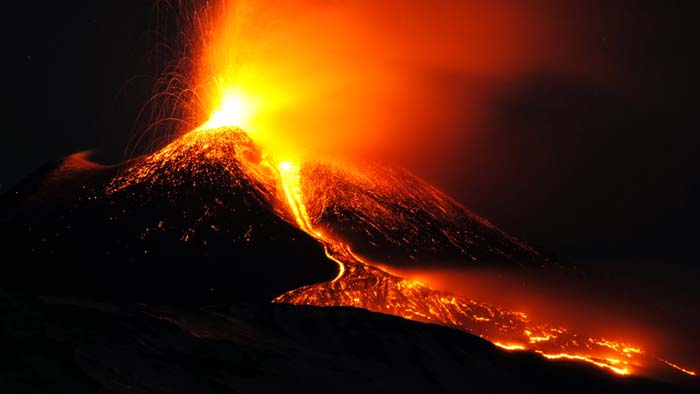 Lava eruption at Mount Etna in Siciliy, Italy. Photo by AP, via smh

The tallest active volcano on the continent of Europe is Mount Etna, located on the east coast of Sicily in Italy. It is still active, with the most recent eruption occurring from late 2013 and ongoing into 2014. The volcano is on an active watch, and tourists are discouraged from attempting to hike or travel in the area.

The rock of Mount Etna dates back 500,000 years old and has been erupting constantly for a number of years. 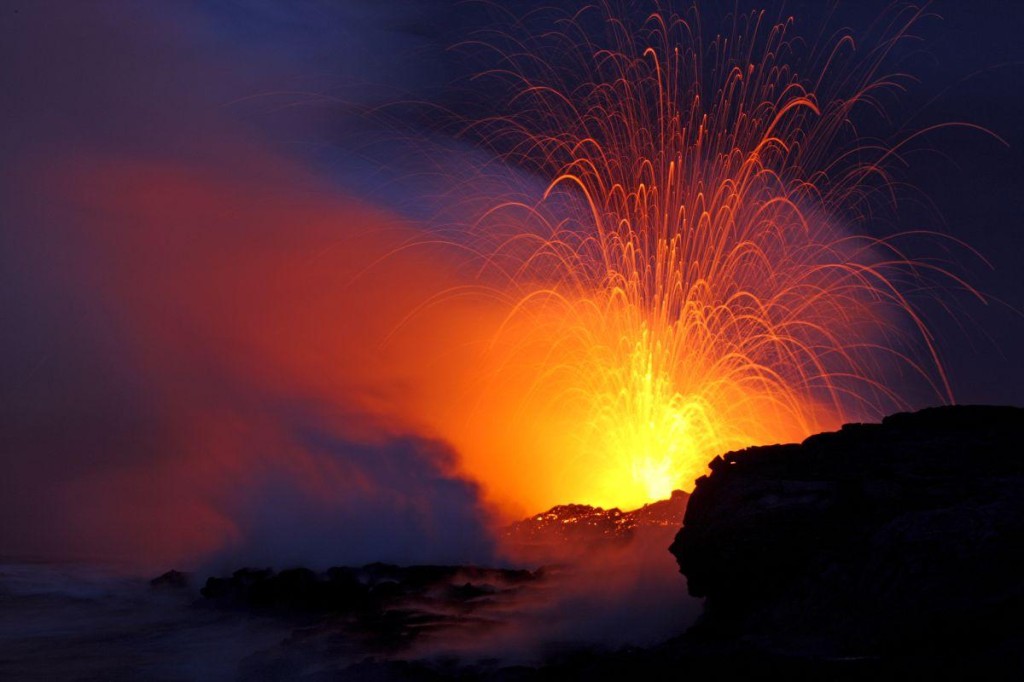 A powerful eruption at Kalapana in Hawaii. Photo by EPA Bruce Omori via theguardian

Kalapana once was a town, but has since been partially destroyed by lava eruptions and so now exists as a volcano viewing site to active volcano, Kilauea. Kalapana is a great place not only view the volcano, but to also examine the way in which an eruption can shape and change the formation of land – and the type of rock that form after an eruption.
Kalapana is also a great place to go to visit some of Hawaii’s most famous black sand beaches.