What are the Chocolate Hills in Bohol?

The island of Bohol is a wealthy province of the Philippines. It’s a province that lies in the heart of the Philippines and is typical of the sub-tropical climate of South East Asia and is very popular with tourists. However, aside from the local townships and culture, there’s one particular feature of Bohol that is a major attraction for tourists, and that is the Chocolate Hills. 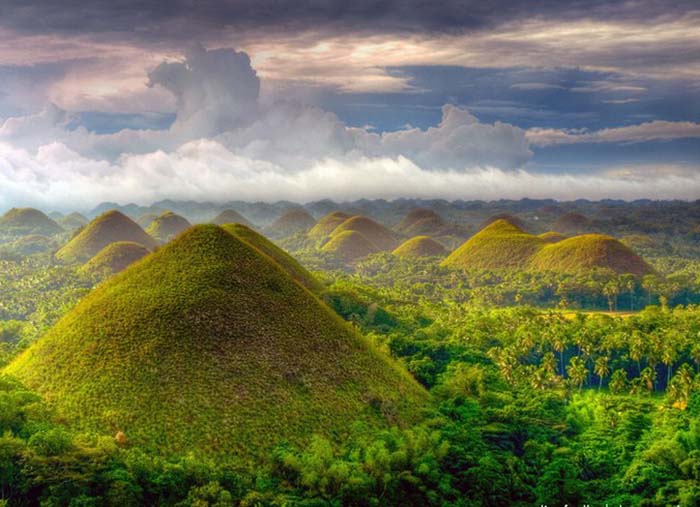 Chocolate Hills in the Phillipines. Photo by Ding Fuellos

But what are the Chocolate Hills in Bohol? And why are they so popular with tourists? Well, to answer those questions, we’re going to have to take a closer look.

The most common phrase used to describe the Chocolate Hills is “a natural wonder” and while looking out over them, it would be hard to disagree with that sentiment. The hills are an oddity, a geological accident that is a marvel to behold. Dispersed throughout the heart of Bohol is a rolling terrain of conical hills of almost perfect symmetry. They look like giant green ant hills raised up from the earth in their hundreds for as far as the eye can see. 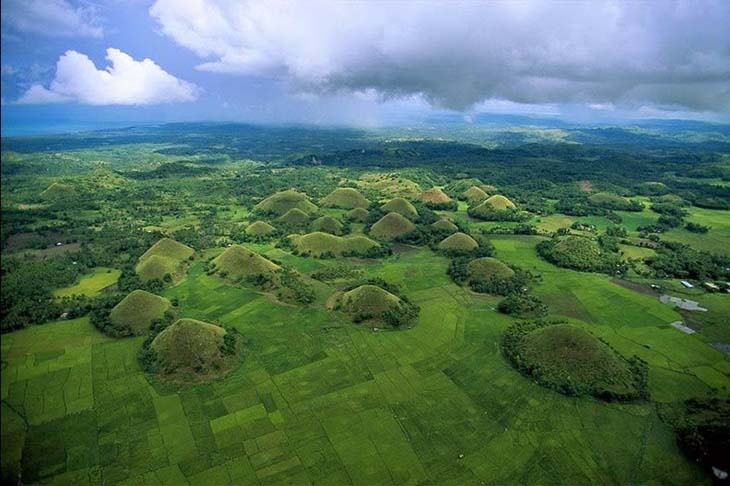 An aerial view of the Chocolate Hills in Bohol. Photo via ggpht

What they are in actuality is dome-shaped limestone hills covered in grass. Official estimates number them somewhere between 1268 and 1776 individual hills with heights varying between 30 to 50 metres, while the largest stands at 120 metres high.

The reason behind the name Chocolate Hills is because during the dry season, the grass on the hills dries up and turns brown, leaving the region looking like hundreds of giant chocolate kisses dot the landscape. 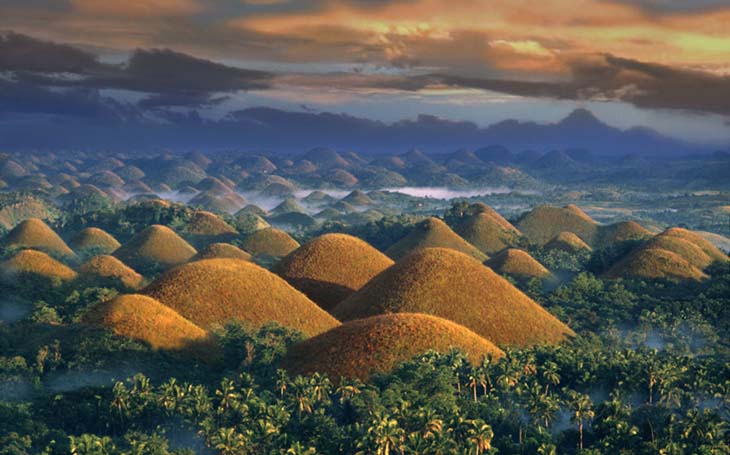 An amazing dusk night of the Chocolate Hills. Photo via Huffington Post

Explaining just how the Chocolate hills formed can be a little bit difficult as there are some complex geological processes at play here, there isn’t even a consensus among geologists on just how they were formed. The most widely accepted explanation is that the hills are hardened formations of ancient marine limestone that sits on top of a layer of impenetrable clay. Throughout time both rainwater and erosion contributed to the dissolution of the limestone, leaving behind the famous conical mounds that are there today.

Well, that’s the dry, boring explanation for how the hills formed anyway, local legends on the other hand tells of different potential origins.

The first legend tells of two giants fighting an epic battle; for days they hurled rocks and boulders and sand at each other until both collapsed from exhaustion. In their exhaustion, they forgot the reason why they were fighting and became fast friends. However, when they left they forgot to clean up the mess they made while fighting and so the Chocolate Hills stay standing to this day.

A second, more romantic legend tells of two lovers, the giant Arogo and human girl Aloya. Since Aloya was a human, she didn’t share the long lifespan of a giant and when she finally died Arogo was in such pain and grief that he couldn’t stop crying for weeks on end. The giant mounds of tears he left behind eventually dried up, thus forming the Chocolate Hills.

The best time of year to go is in the dry season, as you’ll be able to see the Chocolate Hills in their famous brown colours. 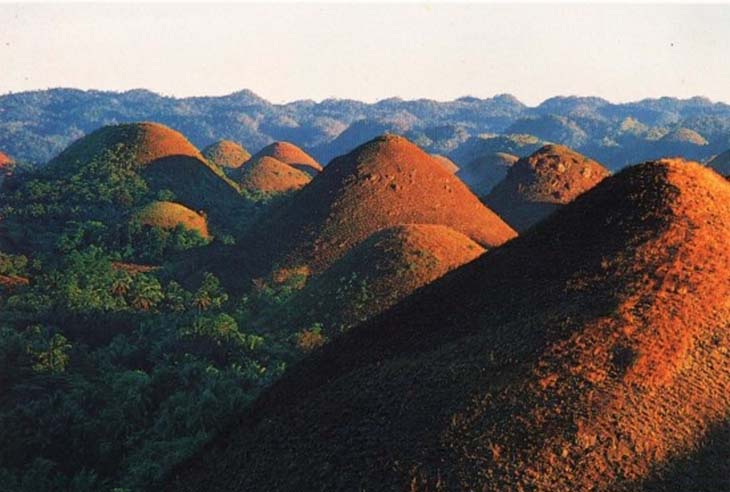 The sunlight over the Chocolate Hills. Photo via paradiseintheworld

If you want to visit the Chocolate Hills, the closest place to set up shop is the city of Carmen, Bohol. Two of the many hills have actually been converted into resorts, so it’s possible to stay right amongst them.

However, you have very little choice in accommodation if you choose to stay there. The Government runs Chocolate Hills Resort and is about the only accommodation available, but the resort is in a state of indefinite incompletion after funds to renovate and extend it ran out. However, if you’re willing to put up with the inconvenience of a half-completed resort you can put yourself in the unique position of being able to see the sun rise over the hills. For travellers a bit more accustomed to roughing it, this trade-off is well worth it.

Alternatively, there is a resort called Sagbayan Peak in Sagbayan town just 18 kilometres to the northwest. It mightn’t offer as good of a view of the hills, but the site is privately owned and might be more to your liking.

There are plenty of tour operators and tour guides that will be happy to bring you to the Chocolate Hills. Alternatively, if you want to get there yourself, you’ll need to fly to Tagbilaran City. From there, head to the integrated bus terminal in Dao and catch a bus going to Carmen. This method is fitting for the adventurous traveller, but be warned that getting there will be the easy part. Departing is a different matter as buses from Carmen depart only by the main road in far fewer numbers. 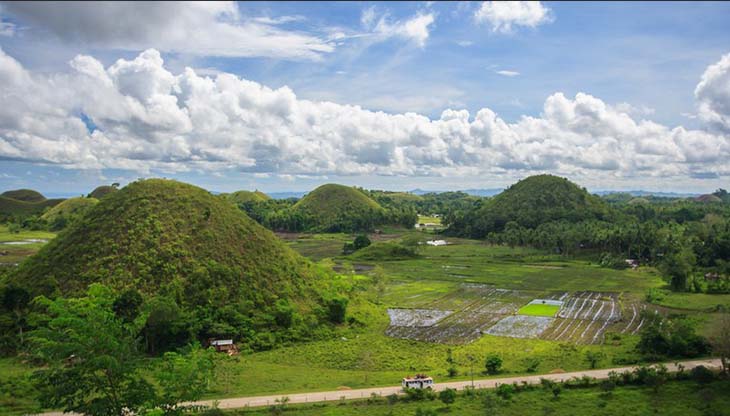 The mini bus that drives by every day. Photo by Julia Sumangil