In the deep heart of Thailand’s thick jungle, where tigers hunt, killer snakes crawl and bird eating spiders lurk lies something much more sinister, The Death Railway. While this name might sound like the title of B grade horror film it is not to be taken lightly, it earned the name from the thousands of men that died in its construction. Nestled in the dense jungles of South East Asia this railway stands as a grim testament to the capacity of men’s cruelty and the inhumanity of war.

After taking Singapore from the English forces in 1942 the Japanese needed a way to transport materials quickly from North to South without using the sea; as the allied forces were gaining control of the sea channels. 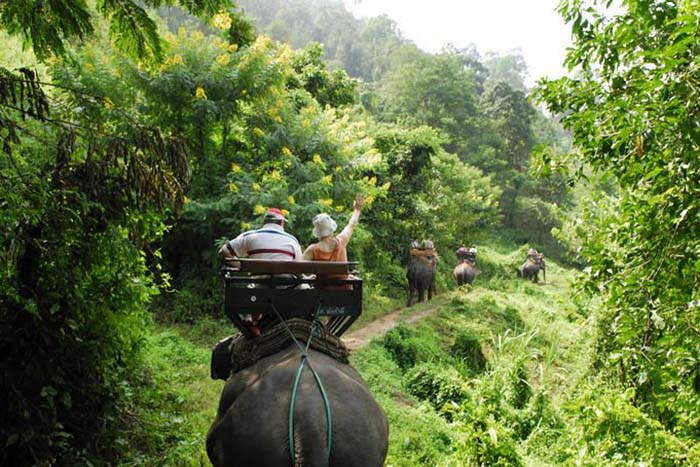 The Thai jungle is rugged, uncomprimising and amazing. Photo via lonelyplanet

They needed to build this track quickly to be able to continue their push south. To complete this monumental task were 60,000 Allied prisoners of war captured after taking Singapore and the 180,000 labourers from other Asian countries. They built the 400km railway in about fifteen months. In this short time, disease, cruel conditions, starvation, accidents, executions and sheer exhaustion killed 16,000 of the Allied troops and 90,000 of the Asian labourer force, forever marking the land as a place of despair.

While today there is only a small part of this train line which is in use, you can follow a path through Thailand that these men would have gone, not only to understand a grim chapter in human history but to see amazing rainforest, experience Thai culture and have an in depth South East Asian adventure. 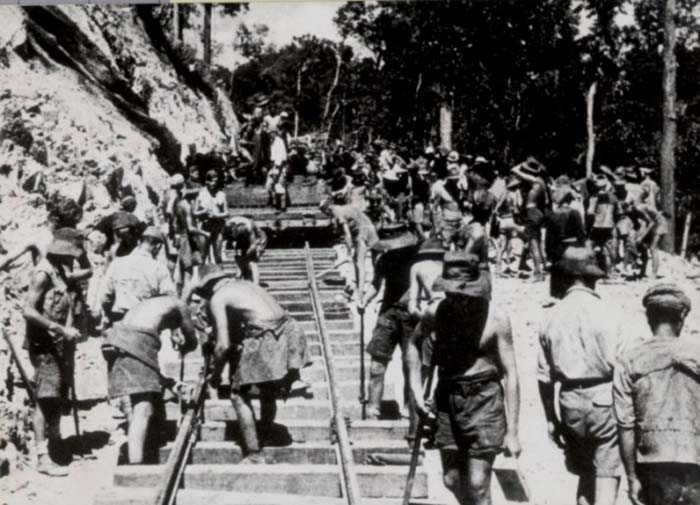 The working conditions were extreme and cruel. Photo via www.dailymail.co.uk

As mentioned before you cannot catch the train along this entirety of the actual path but you can experience a ride on the actual tracks at a small section from Kanchanaburi. This can be done as a trip over a few days or even as a day trip out of Bangkok. There are many options to travel from Bangkok to Kanchanburi and from there you can catch a pleasantly dingy train on “the Death Railway”.
The trip has been described as hot and sweaty, as the train is old there is no air conditioning and it will probably be quite crowded. In some ways this is more appropriate so that you can understand the conditions the men who worked on the track suffered through, it is estimated a man died for every slat that holds the train line up.

Heading north and further into the jungle

If you decide to keep heading north to follow in these men’s footsteps you can go back to Bangkok and take an overnight train to Chiang Mai. Catching trains in Thailand is cheap and easy, this particular ride will probably take about 15 hours. 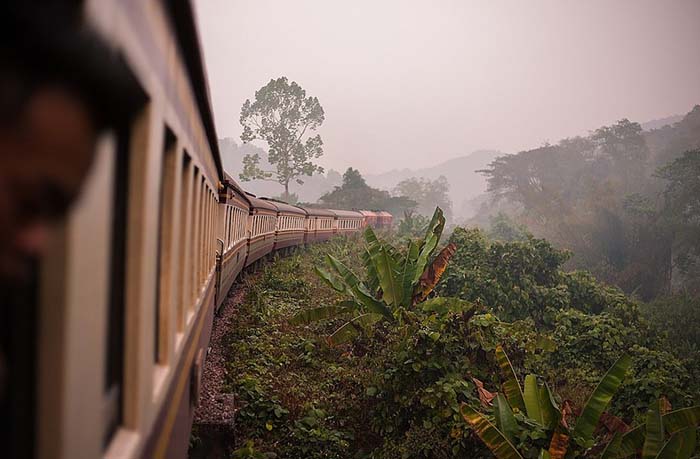 Train is the way to go in Thailand. Phot via www.flickr.com

The bonus is for most Western travellers even a first class “sleeper” could be considered quite cheap, so it can easily end up being quite a comfortable yet affordable ride. If you want to make the most of your trip and travel during the day the views are quite amazing as the train goes through some of the thickest jungle Thailand has to offer and as you reach Chiang Mai in the North the mountain views are dynamic.
If you decide to take the road north slowly, something highly recommended, there are some must see places.

One of Thailand’s many ancient gems takes its place in the form of Sukhothai. This ancient city was founded in the 13th century and became the kingdoms first capital; this is an extremely influential city in that the kingdom it presided over instituted much of contemporary Thai culture and their future physical borders. This UNESCO World Heritage Site covers a fair bit of ground so if you’re feeling fit one of the better ways to get around is by bike. 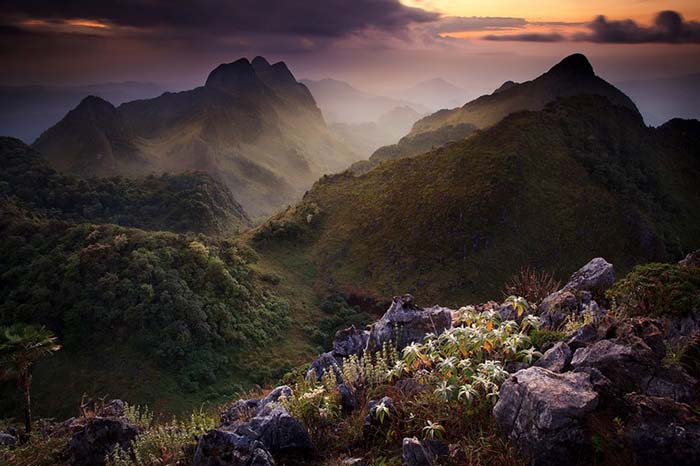 The Chiang Mai mountains are a spectacular sight Photo via www.flickr.com

While in Sukhothai a great place to stay is the At Home Sukhothai Hostel. In this part of Thailand there are a plethora of highly affordable extremely comfortable hostels and At Home is one of the best rated. This hostel can be found at YHA 184/1 Wichian-chamnong Rd., Muang District, Sukhothai, Thailand.
To get to Sukhothai catch a train from Bangkok to Phitsanulok, from here you can catch a bus to Sukhothai.

Finding your way through Umphang

If you really want to get away from the usual tourist traps and you fancy yourself as a bit of a mountaineer, try the remote village of Umphang. This unassuming little village is great if you really want to get a taste of rural Thai life. As well as this you can partake in a trek to see the Thi Lo Su Waterfall, these breathtaking waterfalls cover the forested cliffs creating an otherworldly beauty. In this part of Thailand there is an emphasis on ecotourism. This is the right area if you’re looking for guilt free elephant rides, as there are conservation parks in the area you can easily get to. 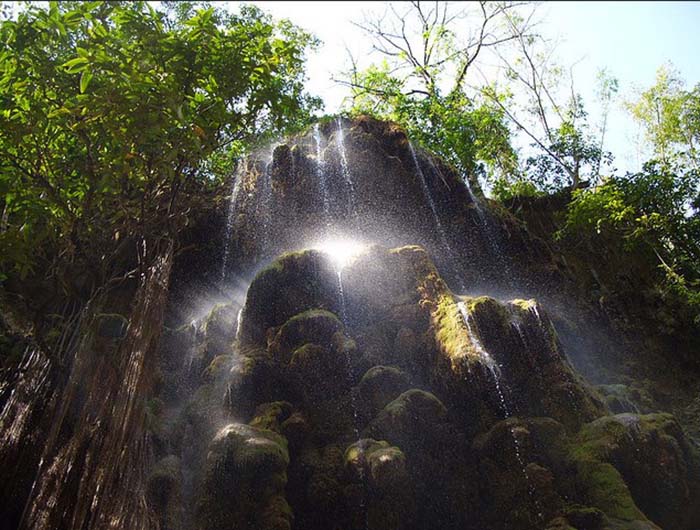 The waterfalls of Umphang are well worth the trek. Photo via www.flickr.com

A good place to stay in Umphang is the Umphang hill resort; an affordable place to stay that offers private rooms, rooms for groups and 10 person dormitories. As well as this they are connected with many of the local activities and are eager to help you do what you came to do whether it be rafting, an elephant tour, caving or trekking. They can be found at 59 M00 6, T. Umphang, A. Umphang Tak Umphang, Thailand 63110
Getting in and out of Umphang can be a little difficult; the easiest way from Sukhothai is to catch a bus to Mae Sot. From here there are a number of buses going to and from Umphang.
Back in Mae Sot the easiest way to get to Chiang Mai is via one of the many direct buses that leave daily.
The jungle grows thick and fast over the past making it easy to forget what happened, especially in the generally festive setting of Thailand. As you travel north it’s wise to remember what path you’re following and to have respect for the people who gave everything in carving it out.