The Beauty of Transylvania

Nestled in the heart of Transylvania and bounded by the peaks of the Carpathian Mountains sits the eloquent city of Brasov (Bra-shove). The contrasting colours of the lush green landscape against the blistering orange-tiled roofs will leave you breathless, as you find yourself within the life and times of the baroque period. 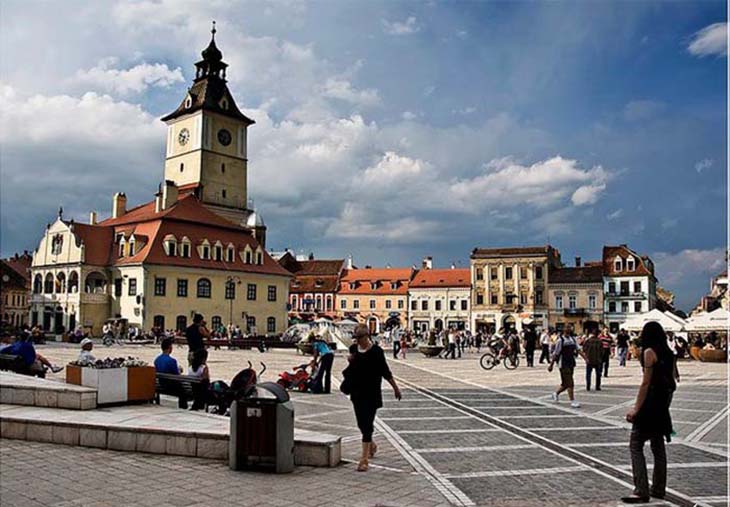 Weaving through the maze-like streets of the new town it is easy to become overwhelmed by the untouched baroque architectures, centred on the picturesque council square known to the Saxon people as Marktplatz. Brasov’s town square is tantalising due to its archaic foundation harbouring modern activities, from exquisite dining (we recommend Sergiana, a traditional Dacian restaurant) to an evening Saxon trumpet show, harmonising a perfect night’s end. 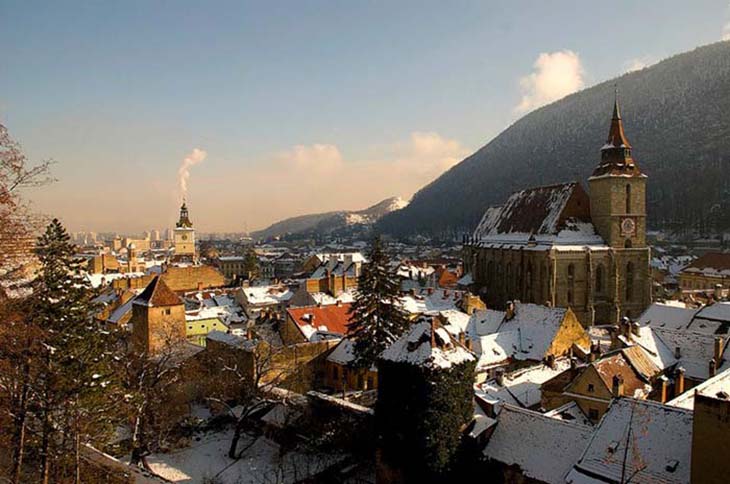 Brasovs old town is its cultural heart. Photo by Travis Ferland via Flickr

But discovering Brasov in Transylvania does not end in just one night.

Mount Tampa and a journey through Brasov

Mount Tampa sits at the edge of the city providing a spectacular view of medieval Brasov which can be reached by cable car or an exploratory walk up one of the paths winding up 900 metres above sea level. The peak provides an exclusive perspective of the fortification of Brasov, enclosed by kilometres of brick and mortar which once upon a time, played a significant role in the protection of the crown state through many battles. 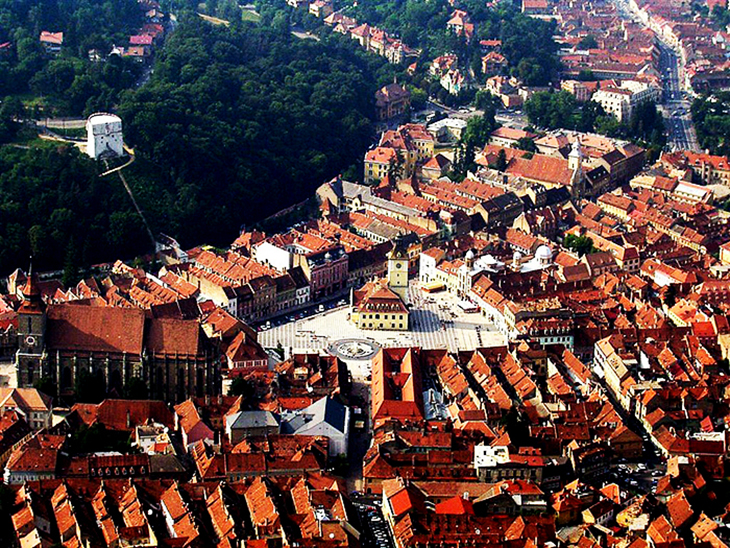 From Mount Tampa you can get a great view. (gondola). Image via dangerous business

Descending Mount Tampa, we highly recommend detouring past the Black Church. As suggested by the name, the structure possesses a dark past; according to the legend in 1383 a German child who criticised the angle of the newly built church was pushed off the church tower by an aggravated citizen. He then buried the corpse within the church thus concealing the crime.

The Black Church and its dark past is iconic of eastern Europe. Image via melbo.net

The bad omens continue – 300 years later, during The Great Turkish War (1689) half of the church was burnt, creating its ‘black’ complexion adding to its imposing force leaving you overwhelmed with goosebumps. Trundling back through the old city, it may be easy to miss Rope Street or proudly known to locals as Poarta Schei, with a width of almost 1.3 metres you can understand why. The narrowest street in Europe connects two main roads of Brasov, which was formally a corridor for fireman. Remember your camera and be quick, as small spaces and eager tourists are never a good mix!

Draculas Tale and a winters delight

30 kilometres south west of Brasov, situated on the border of Transylvania and Wallachia lies Bran Castle or commonly known as “Draculas Castle”. Whilst the castle itself isn’t anything to write home about, the storyline is the main tourist drawcard. Whether or not you believe in Bram Stokers novel claiming Vlad the Impalers (Vlad III) existence at Bran, don’t be afraid to be swept off your feet by the fun, fictional ride. Don’t forget to pick up some overly tacky Dracula Merch! 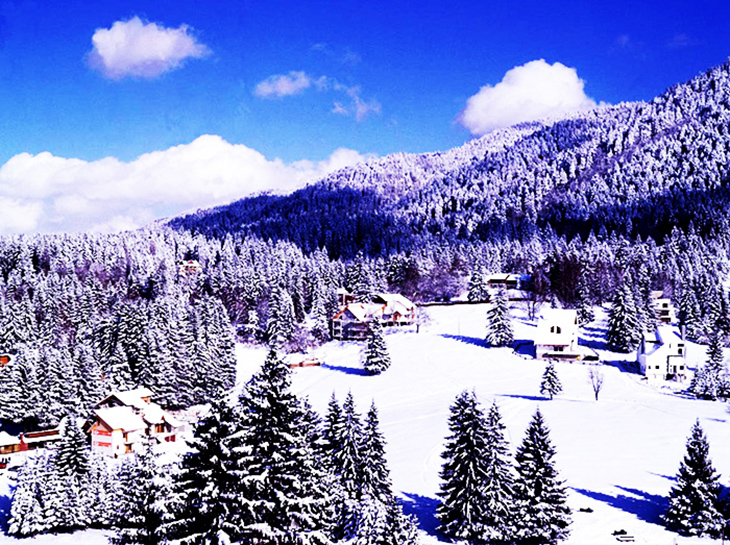 Poiana Brasov is esepcially scenic during the winter months. Image via Madaline Gheorghe

If you are lucky enough to find yourself in Brasov in the winter, not only are you engulfed by Carpathian peaks dusted with fluffy white snow, you are a short 20 minute bus ride to one of the most sought after snow fields in all of Eastern Europe. After it’s modernization in 2010, Poiana Brasov attracts countless winter sports enthusiasts with up to 10 main ski/snowboard slopes within the resort. After a big day on the fields, tuck down for a meal at Sura Dacilor (The Dacians Barn) whilst indulging in a traditional mulled wine and a pepper spiced alcoholic drink known as țuică.

History and how to get to Brasov

Aforementioned, Brasov radiates wealth due to its previous connections with Moldavia and Valachia, but also it’s fortunate central position within Romania allowed merchants to trade growing the Brasov economy exponentially. Brasov is made up of a majority Romanians, with a small percentage of Hungarians and Germans (Saxons), giving the town a cultural fusion of entertainment, food, nightlife and fun. 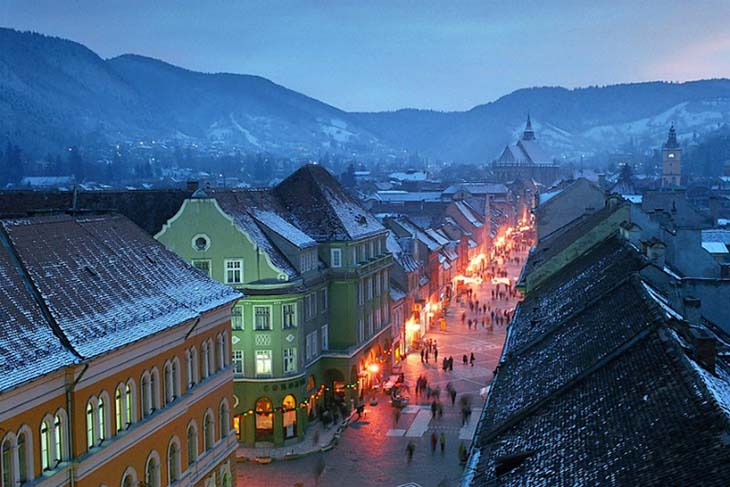 Make sure that you explore the incredible streets of Brasov, Transylvania. Photo via romaniadacia

Currently Brasov has no civilian airport; however development has begun for an airport by 2015-2016. Otepeni airport (Bucharest) is three hours south by car. We highly recommend jumping on a train to Brasov as it is a major Romanian rail hub with daily connections from Bucharest, Vienna and Budapest.