Over the centuries humans have managed to manipulate nature for both functional and aesthetic purposes. And nature is perfectly capable of both adapting to human invention, and creating awe-inspiring sights on its own. We take a look at some of the most incredible places in nature that you may not have heard of. 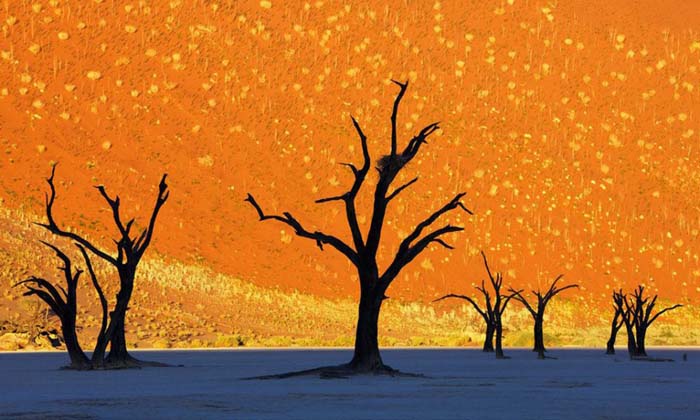 Once part of a thriving forest, encroaching desert has taken over. Image via Distractify

While this might look like a piece of abstract art, it is actually a photograph of the trees of ‘Dead Valley’ in Nambia against the sand dunes – the highest in the world. The trees were once a part of a thriving forest, but the desert has expanded, and left us with this incredible sight. 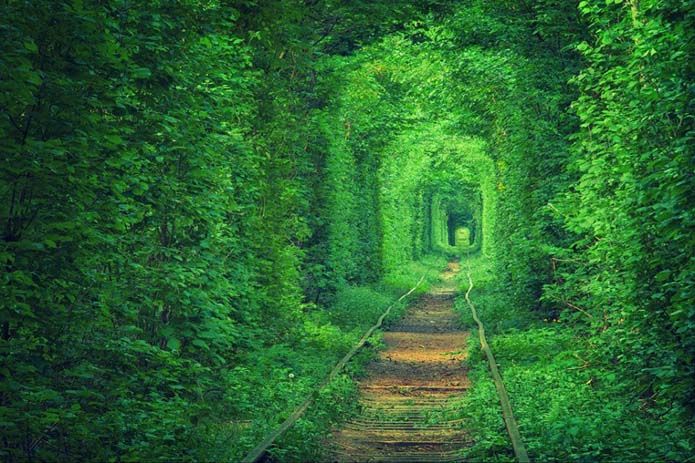 Lost and forgotten, nature has grown around passing trains. Image via Distractify

This beautiful sight might look more at home in Japan (home of the famous Wisteria Tunnel), but is actually found in the Ukraine. When the rail line was in use, the trees grew around the trains, creating this gorgeous tunnel. Now that the rail line is defunct, it is a beautiful and well-known walking path. 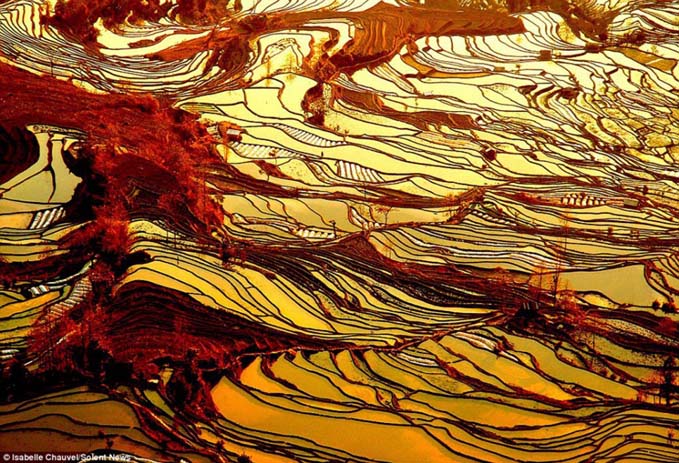 A landscape that looks more like a drawing. Image via Distractify.

It might look like someone has carefully drawn these hills, but in truth, these are the farmlands of Yuanyang County, China. The distinctive farming method, including ‘terraced’ levels to make the uneven landscape usable, have created this incredible view. 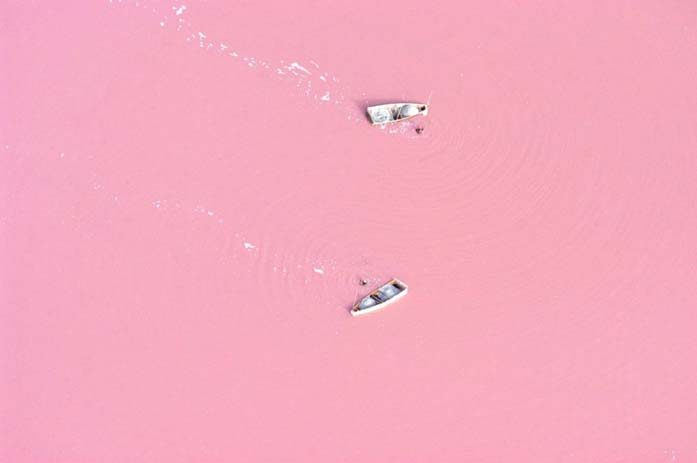 The lakes distinctive colour is caused by balance of algae. Image via Distractify

Incredible shades of blue and green are common in the oceans and lakes of the world, but few countries can boast a body of water that is candy-pink. Lake Hillier in Australia is one of the few that can, thanks to the algae and bacteria that have dyed the water its distinctive colour. Luckily, the bacteria have no negative effect on the surrounding environment. 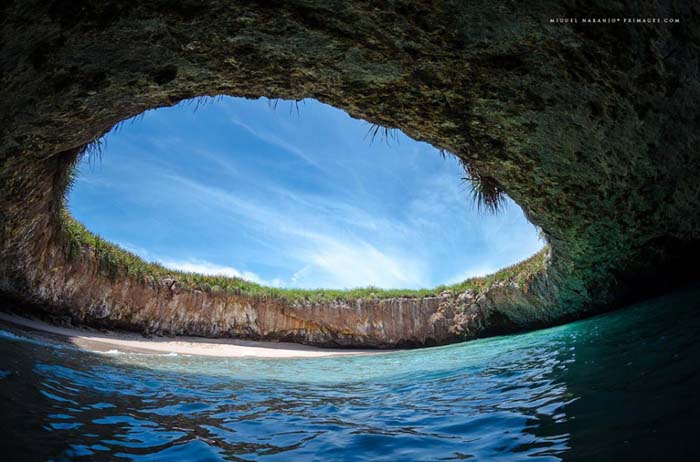 Hidden Beach is only accessible through a short tunnel. Image via Distractify.

A hidden beach sounds perfect, doesn’t it? This particular marvel is found in Mexico, and its formal name is Playa de Amor (the Beach of Love). The result was a combination of bomb-testings in the early 1900s and volcanic activity, creating an in incredible sanctuary, where you can relax and watch local sealife in their natural habitat. 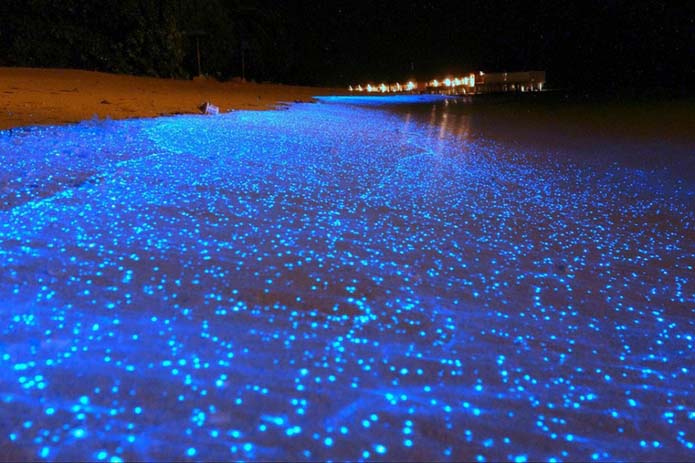 The light in the Sea of Stars is bioluminscent plankton. Image via Distractify.

This magical sight is from the Vaadhoo Island in the Maldives and ‘the Sea of Stars’ has become quite famous in the last few years and with good reason. This scene that would look at home in a Disney film, is known as ‘marine bioluminescence’, and caused by phytoplankton in the water. 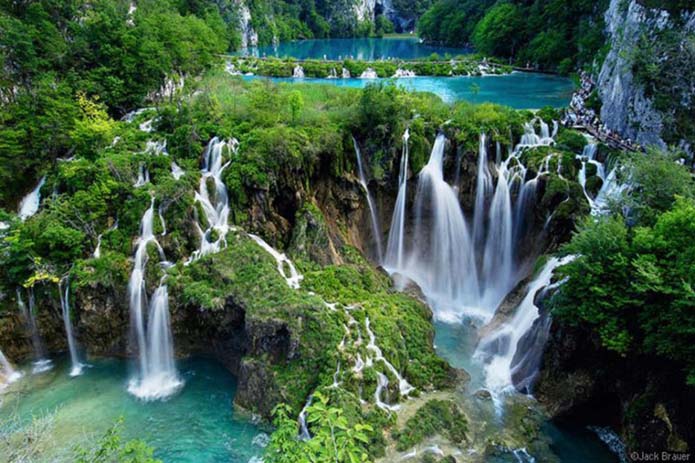 This lake is naturally created as water flowed around limestone. Image via Distractify.

Another location that looks like it belongs in a fantasy movie, the Plitvice National Park in Croatia boasts this elegant and naturally-formed site. Time is the main cause of these caves and waterfalls, with the flow of the water creating natural dams, caves, lakes and waterfalls. 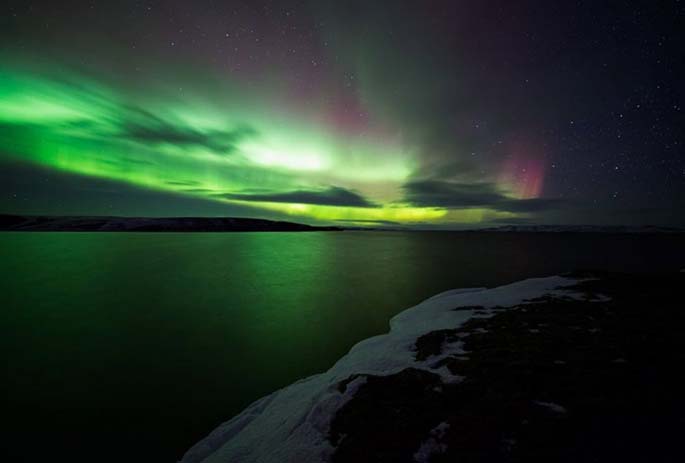 Iceland boasts some of the most beautiful natural sights on earth, and the highlands of Iceland take that one step further. During the day, you can glimpse the glaciers and geysers that Iceland is known for. But at night, you have a front row seat to one of the most beautiful and mysterious displays in existence – the Aurora Borealis. 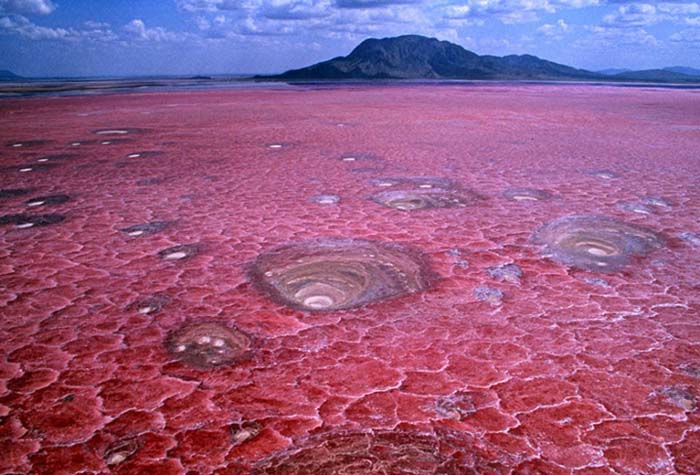 The salt-content is deadly to wildlife. Image by Distractify.

Another brightly coloured lake, this time found in Tanzania. The colour of Lake Natron is caused by microorganisms drawn to the exceptionally high salt content. As eye-catching as Lake Natron is, sadly the high salt-content is deadly to local wildlife. 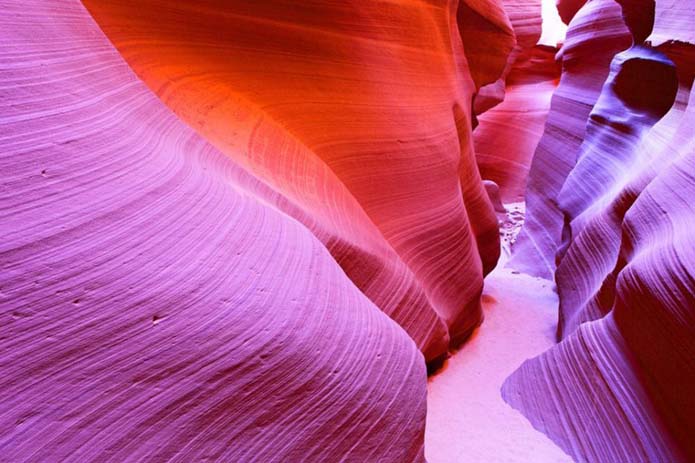 Less light reaches the caves and crevices of Antelope Canyon. Image via Distractify,

One of the most well-known sites on our list, Antelope Canyon was formed over a massive period of time, by flowing water, creating narrow and intriguing caves and crevices that mimic the shape and movement of water. The bright colours are simply determined by the amount of light that reaches the crevices. 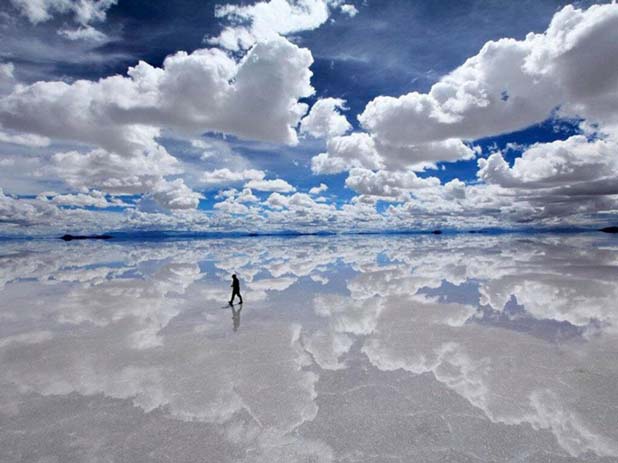 Salar de Uyumi, the famous salt flats, have to one of our favourites. Formed from a series of prehistoric lakes, this natural marvel becomes a giant mirror during the rainy season, reflecting the sky perfectly. These Bolivian salt flats are so reflective (and flat!), they’ve been used to calibrate satellites. 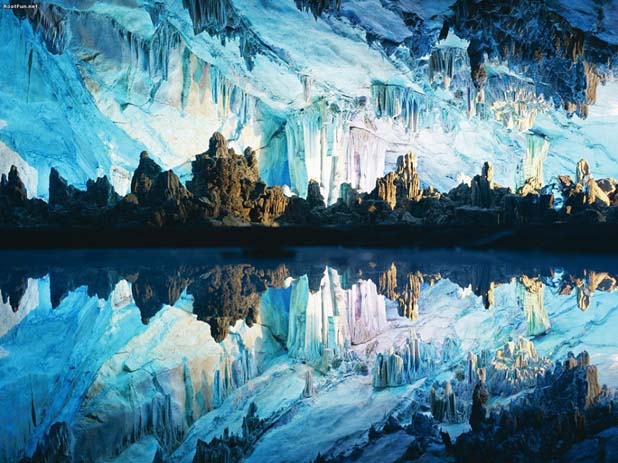 Found in Guilin, China, the Reed Flute Caves are another marvel formed by the ebb and flow of water. The stalagtites and stalagmites were formed through erosion, and have been a popular tourist attraction for over a millenia. 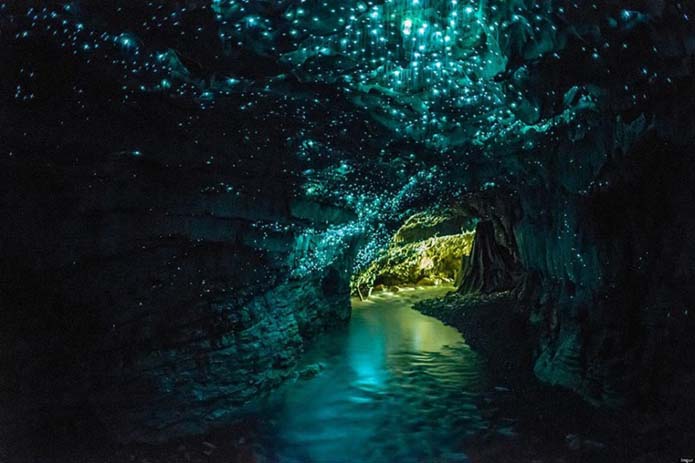 The Glowworn Grotto is an incredible place. Image via Distractify.

Found in Waitomo, New Zealand, the ceiling dotted with glowworms isn’t the most amazing part of this site. The Waitomo Caves are divided onto three levels, where visitors can see some of the amazing limestone formations, the largest of which is known as ‘the Pipe Organ’. It is the final stage of the tour that visitors are shown the Glowworm Grotto, apart of the underground Waitomo River. 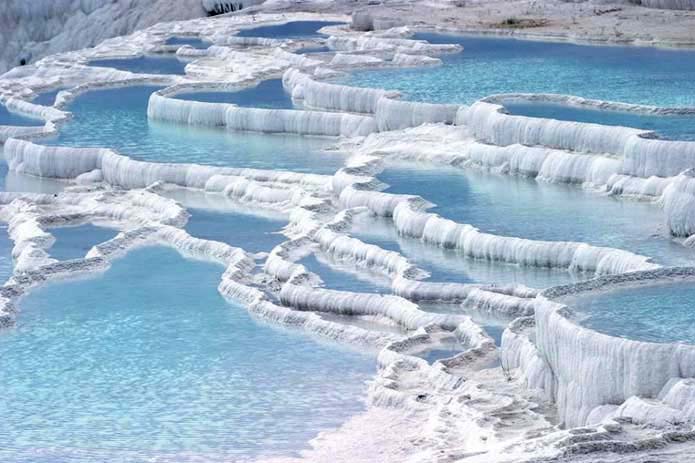 Limestone is what gives the hot springs their white colour. Image via Distractify.

This particular sight might inspire images of Greenland or Russia, but don’t let the almost ice-like appearance fool you: these are the Pamukkale Hot Springs, found in Turkey. The terraced hot springs formed slowly over millions of years. Despite looking rather icy, the white colouring is caused by limestone, not ice. The hot springs are in use all year around. 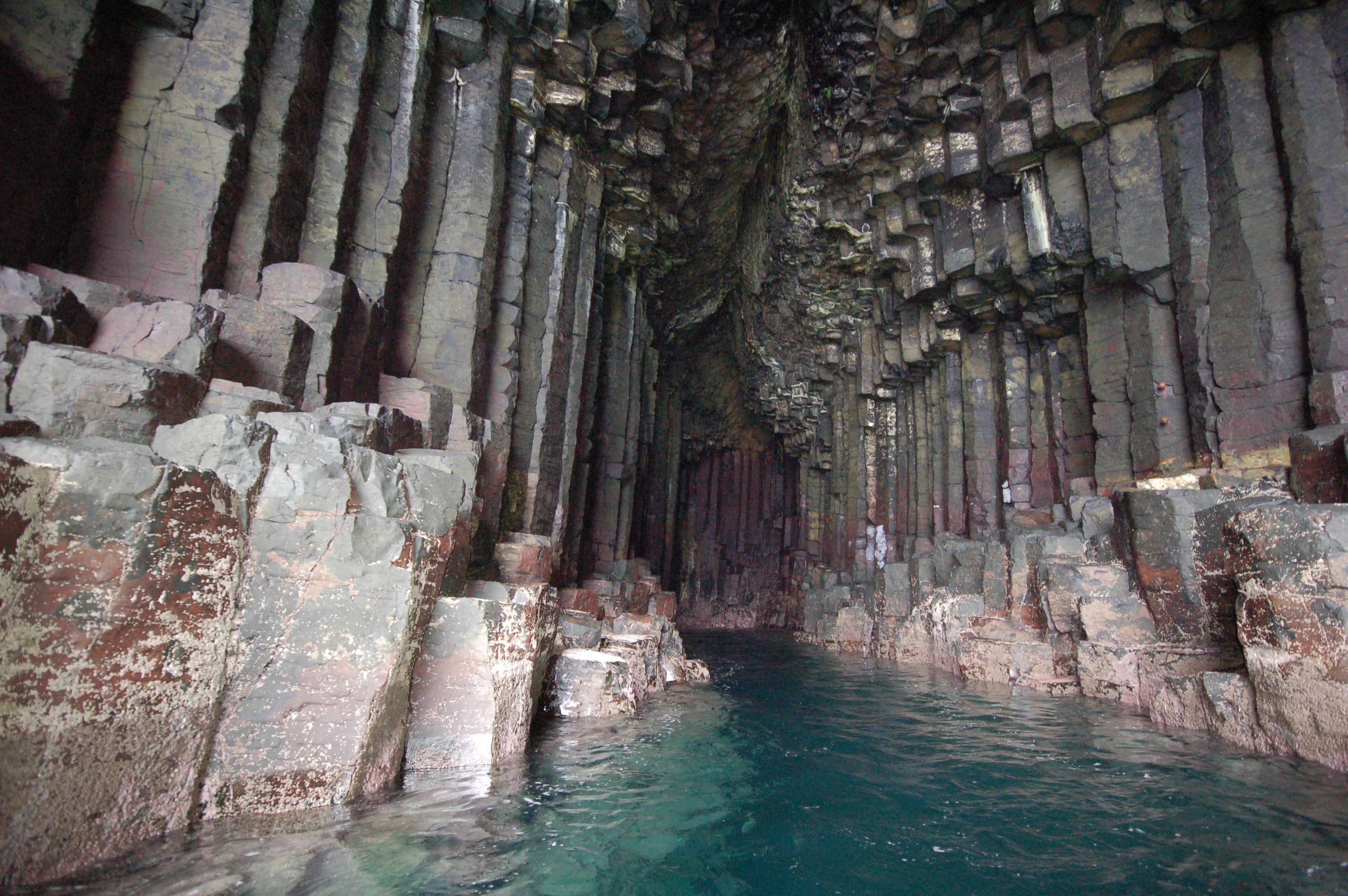 Looks like someone carefully chiseled out the rock formations. Photo by whenonearth.net

It’s quite obvious how much inspiration humans take from the natural world when you see sights like Fingal’s Cave, in Scotland. It might look like it would be at home in a sci-fi film, the geometric formations the cave is known for are the result of lava heating and cooling over millions of years. 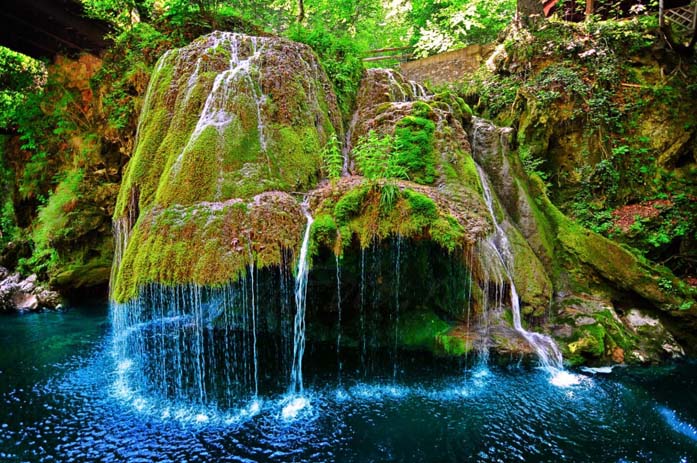 Bigar Waterfall is has an enchanting effect. Image via Distractify.

Sometimes two things come together to create something incredible. In this case, Romania’s Bigar Waterfall is the seemingly simply combination of a moss-covered cliff and an underground water spring. The result? One of the most beautiful waterfalls in the world. 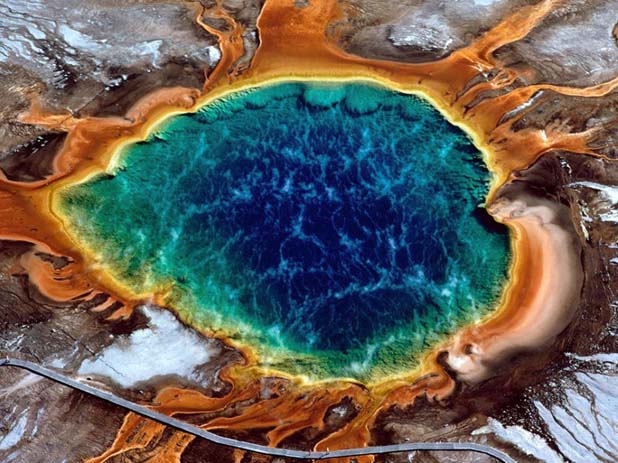 These hot springs credits its vivid colours to microbes. Image via Distractify.

We can credit most brightly coloured bodies of water to algae and microorganisms, and Wyoming’s Grand Prismatic Hot Spring is no different. Pigmented microbes grow around the edges of the enormous spring, which has resulted in a vibrant take on the spring’s natural colours. 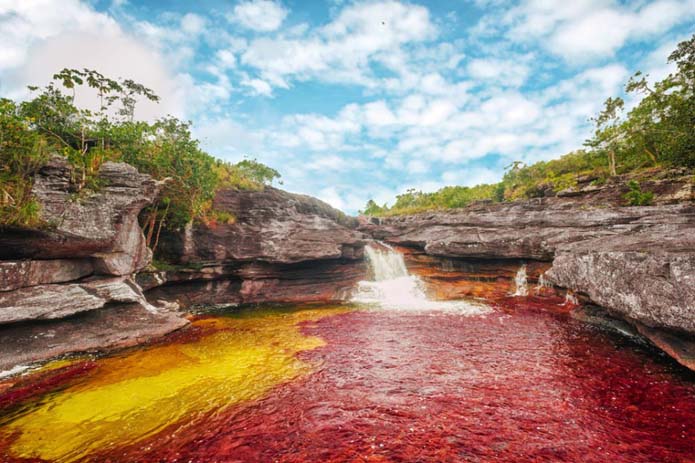 Travelling along the river the colours change. Images via Distractify.

We think it’s safe to say that with the combination of time and water, Mother Natural can achieve anything. Colombia’s Cano Cristales River is definitely evidence of that. With the rock that surrounds the river dating back 1.2 billion years, it is the flora and fauna that call the river home that gives the river its rainbow of colours. 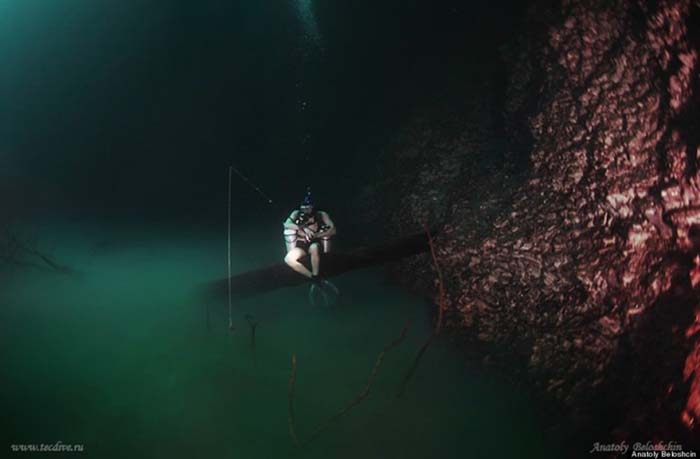 Hydrogen sulphate content has create a second river below. Image via Distractify.

This setting might look spooky, and the result of special effects, but the truth is much stranger – and cooler. Underneath the waters of Cenote Angelita is a second river. This river is full of hydrogen sulphate; this makes it much heavier than the salt water of Cenote Angelita, and has resulted in an independent, secondary river below the surface. 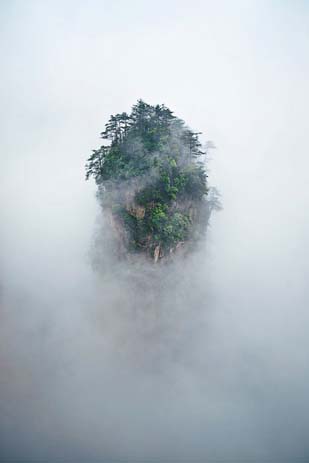 The Tianzi Mountains are an awe-inspiring natural wonders. Image via Distractify.

China has proven that it has some of the most incredible natural sights in the world, and this final entry on our list is no exception. The Tianzi Mountains were originally formed underwater almost 400 million years ago as water eroded the sandstone, and reach over 4000 feet about sea level. So otherworldly, they were featured in James Cameron’s Avatar.