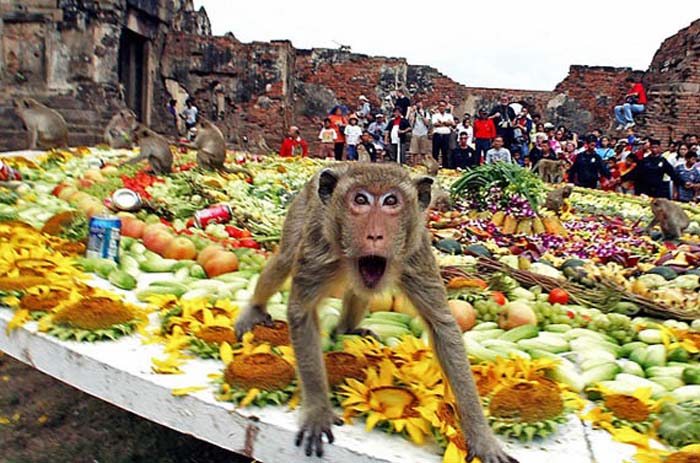 Back off buddy! This is my grub!. Photo by Tracy Crinion, Pinterest

It is believed that, according to Thai legend Rama and his friend, Hanuman, the monkey king together created the town of Lopburi and that the monkeys that roam around Lopburi today are descendants of the monkey king, Hanuman.

In 1989 a local hotelier named Yongyuth Kitwattananusont in Lopburi, North of Bangkok Thailand came up with a brilliant idea to attract tourists to his part of the country. He decided to hold The Amazing Monkey Feast Festival. He thought it would not only be a great way to attract tourists but would  put Lopburi on the map. And a great thought it was.

Here is where the monkey’s run the show and these crafty little devils take it very seriously. 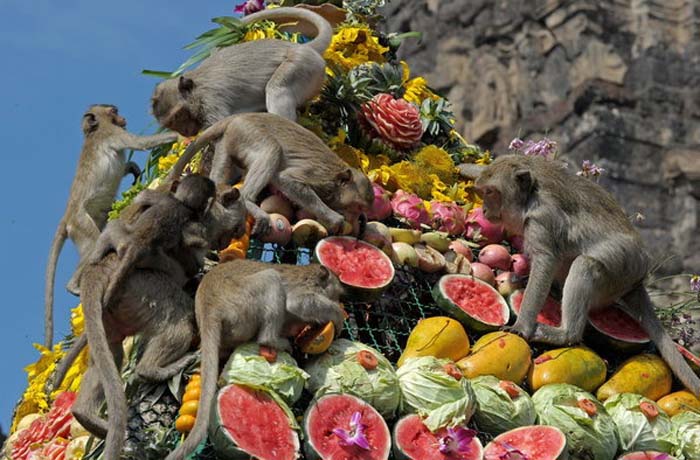 A true feast that would make any monkey (or human) envious. Photo by LA Times

The event is now sponsored by Thailand’s Tourism Authority, and every last weekend of November at the Pra Prang Sam Yot temple, an estimated 3000 monkeys who live in the area are offered a buffet. Yongyuth Kitwattananusont tries to improve the festival each year. One year he even dressed up as a monkey and parachuted down into the event. In 2013 he promised and delievered approximately 4,000 kilograms of fruits, peanuts, boiled eggs, noodles, sticky rice, soft drinks, juice, milk are brought in for the monkeys to eat. There was even fruit frozen in a giant block of ice for monkeys to lick.

The long-tailed macaque monkeys go absolutely nuts about the food they are about to devour. Tourists come from around the world to witness this delight. Some monkeys may approach people and take some of their valuables or food that they are eating.  Tourists are warned that even though these monkeys are used to human interaction, they may turn wild. 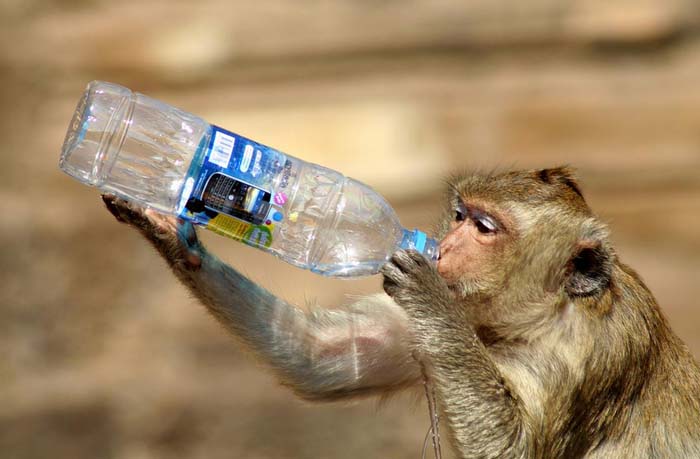 Wash down that terrible human food, geez what was I thinking. Photo by Simon Paris

The people of Monkey Town, just love their monkeys. Other than the monkey feast festival you can explore the monkey temple, Prang Sam Yot, or wander The Old town which has plenty of markets and yes, monkeys and even a mall named monkey mall!

MORE: 5 OF THE BEST TEMPLES TO VISIT IN SOUTH-EAST ASIA 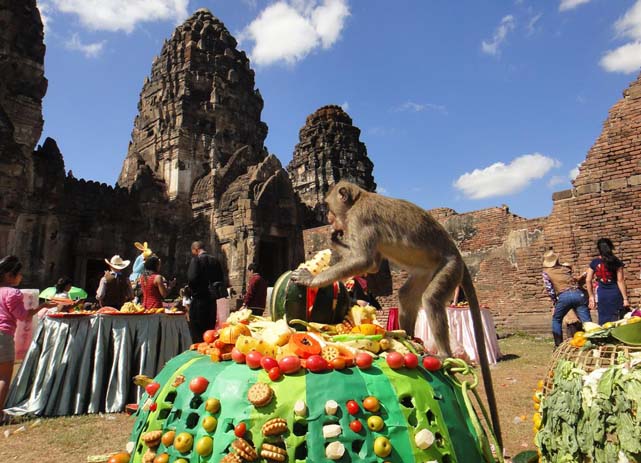 The Monkey Feast Festival is all about the monkeys. Photo by Mathiew Castel, flickr

Lopburi, which is around a 3 hours train ride from Bangkok, is decorated with monkeys everywhere and people will dress up as monkeys on the day. There is also marching bands, parades and dancing for everyone to enjoy.

Lopburi has a high monkey population, as most people are Buddhists and they believe that If we destroy something, anything, we will therefore destroy ourselves. It is understand that Buddha and his disciples had never killed any animal least of all a monkey.