Nothing beats a party on the beach with thousands of like-minded travellers all keen to have a good time. Check out this list of the best beach parties in the world which all offer a wicked combination of sun, sand, music, teeny bikinis, and intoxication. 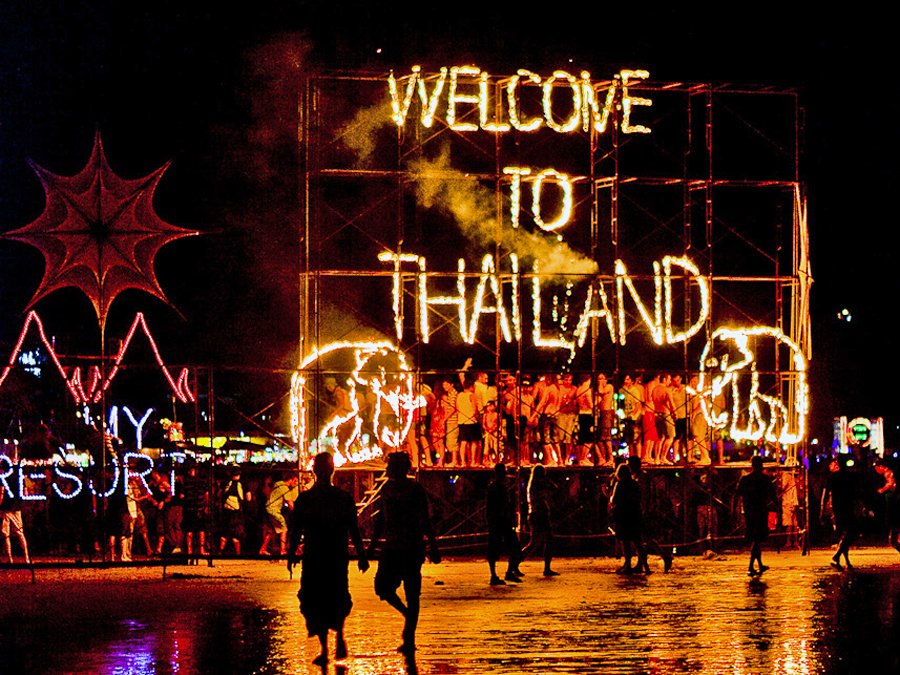 The Full Moon Party is an all-night beach party on the night of every full moon that originated in Haad Rin on the island of Ko Pha Ngan, Thailand. DJs, jugglers, fire-eaters, dancers and fireworks punctuate the evening as the moon is reflected in the shimmering water. With a full moon party every month, travellers who venture to Thailand would be crazy not to take part in the full moon festivities while in the area.

Thailand’s full moon parties have developed something of a cult following in Koh Pha Ngan. Unfolding on the crescent-shaped beach of Haad Rin, a full moon party attracts up to 30,000 people – mostly tourists – who party from dusk till dawn on pristine white sand, drinking from buckets filled to the brim with potent cocktails in their beach-wear.

The bars on the sunrise beach of Haad Rin town stay open and play music such as drum and bass, house, and R&B for the party animals who can manage to keep their eyes open and their feet moving. For many, a nap on the beach appears to be a necessary option in the early hours, but beware there is a chance of waking up with a few funny “selfies” and perhaps missing an eyebrow or two. 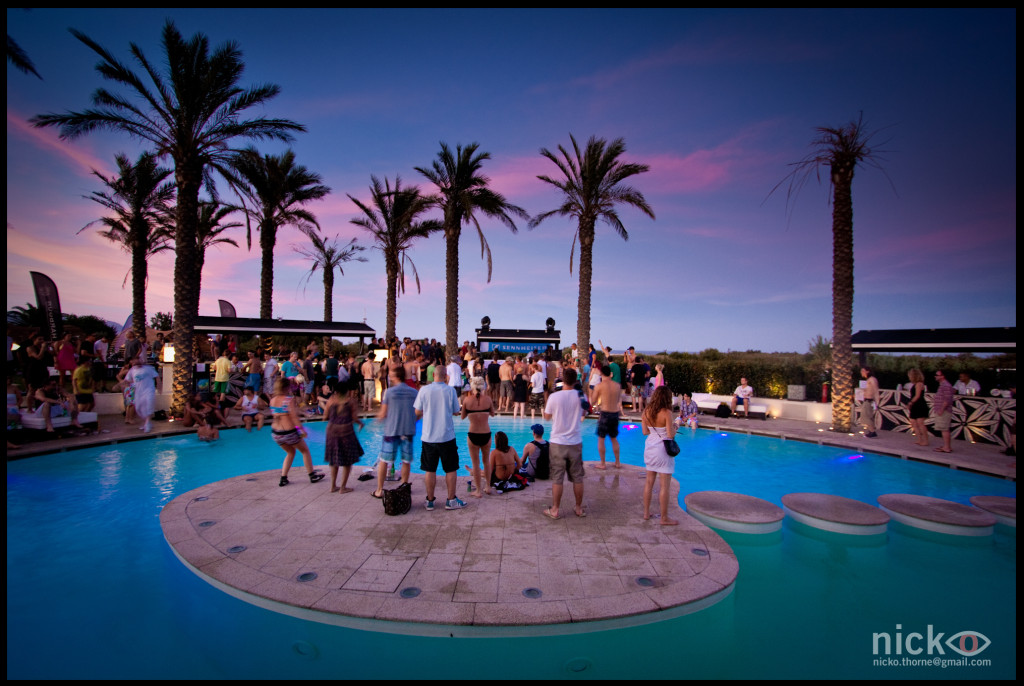 For a whole week drum and bass lovers from all over the world meet on the Italian island of Sardinia to enjoy heavy basslines at the Sun and Bass event which takes place in various clubs and bars in San Teodoro, Sardinia, Italy.

Once a fishing village, San Teodoro is one of Sardinia’s best kept secrets. The island is the perfect venue for Sun and Bass because the merging landscapes of mountains, beaches, and rocks are the mirrored image of the usually unconventional choice of artists.

The event, strictly speaking, isn’t a festival. There is no camping or stages, rather there are various musical events that take place throughout the town, in stylish open-air clubs, usually right next to the beach. There are also parties on the beach organized by Sun and Bass.

Sun and Bass is the ultimate combination of sun, sea, drum and bass. The festival takes place in the sea-side town of San Teodoro, in the island of Sardinia. Even by Italian standards the Sardinian water and beaches are incredible. The nearest city is Olbia, and the airport is a 30-40 minute bus ride away. 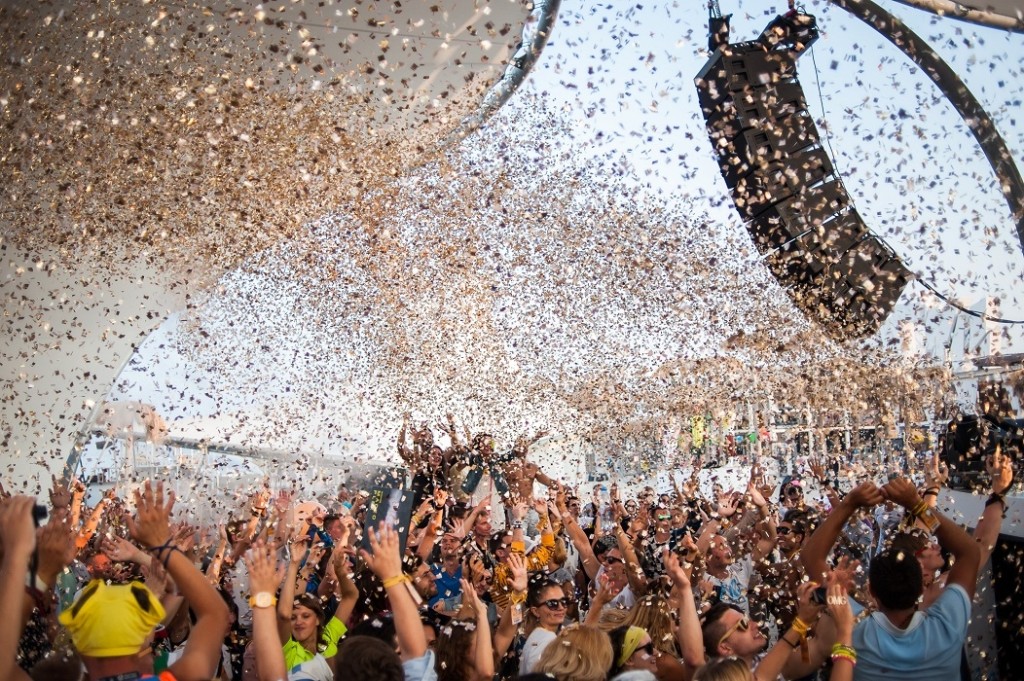 KaZantip is an electronic dance music festival held every year on the Crimean peninsula, Ukraine. It takes place for 5–6 weeks in the summer with over 300 DJs on more than 14 dance floors which play 21 hours per day. More than 150,000 people visit this festival each year.

Popovka is the name of the idyllic seaside location where KaZantip festival stays. It is a small, sleepy village where not much goes on when the KaZantip guests aren’t visiting. It is home to one of the longest, widest, and cleanest sandy beaches on the whole Crimean peninsula, and it is the place to experience the most incredible sunsets on the black sea.

Popovka is just under two hours drive from the airport at Simferopol, the Crimean capital. Crimea is a peninsula on the black sea, and KaZantip is a resort of almost 100.000m2 situated directly on the beautiful black sea. The area contains dance floors, bars and lounges, playground for X Sports, dedicated areas for accommodation, and separate parking.

Thousands of people, mostly between 20 and 35 years old, come together at the KaZantip party land. They travel from all over Europe and the rest of the world to listen to music, dance, meet new people, and of course, to let loose and have fun.

MORE: 5 OF THE WILDEST HOSTEL PARTIES FROM AROUND THE WORLD 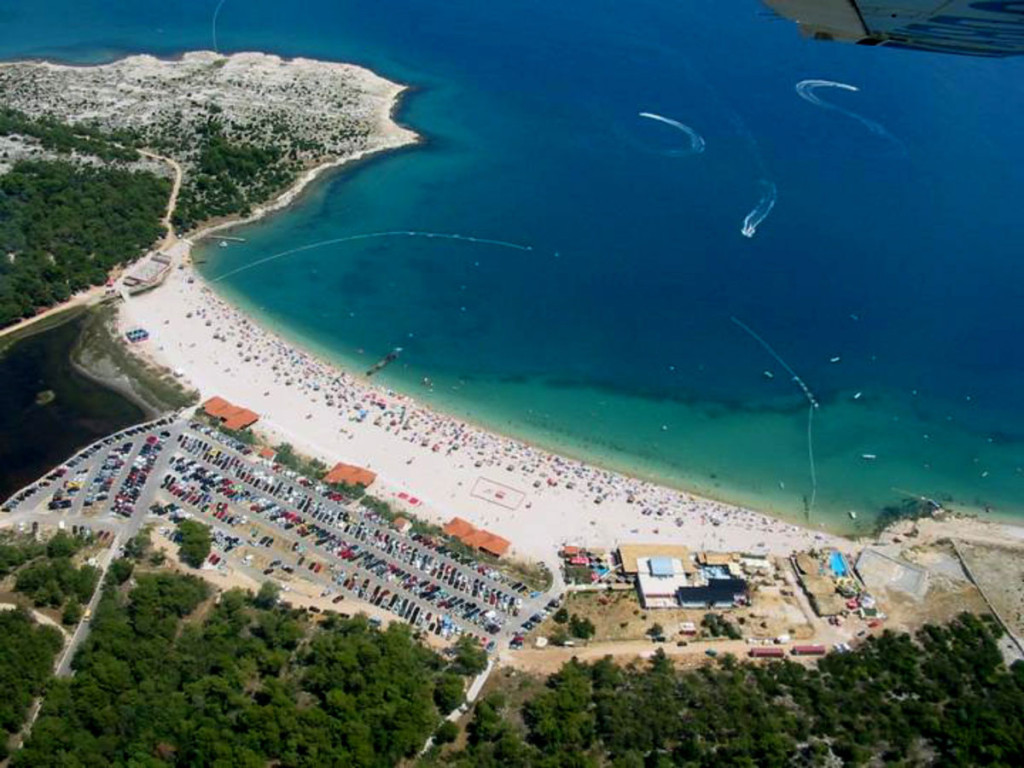 Pag is a Croatian island in the northern Adriatic Sea. It is the fifth-largest island of the Croatian coast, and the one with the longest coastline. The beach is a well-known Croatian summer destination for partygoers, with several all-hours discotheques and beach bars operating during summer months. It regularly features gigs by internationally known house and trance DJs at the peak of the Croatian summer season in July and August.

Zrće is a long pebble beach on the Adriatic island of Pag in the northern part of the Croatian coast. It is located near Novalja and Gajac, about two kilometres from the town’s center. Zrće is particularly popular among young club goers, while other pebble and sand beaches on the island are more family-oriented. 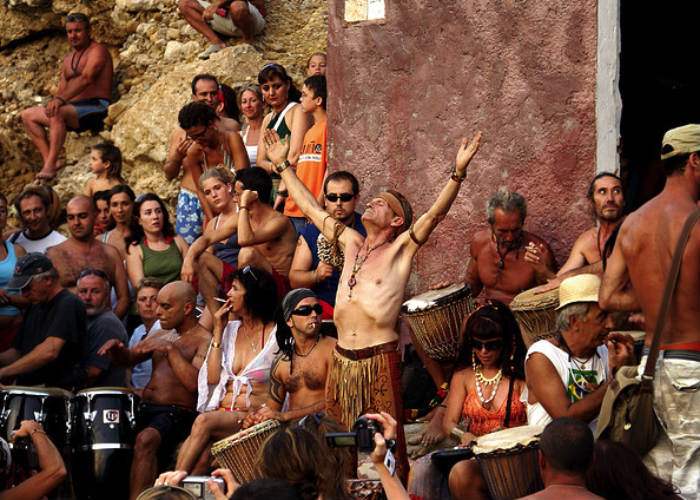 Known as the party capital of the Mediterranean, it’s hardly surprising to find that one of the summer’s best beach parties can be found on the White Island of Ibiza. While model types can be spotted sipping overpriced cocktails at Las Salinas, Benirras Beach is where the real action takes place.

Ibiza is on every party animal’s bucket list, and for good reason. The beaches are movie material and there are more bars than one could count. Shuffle to house music with the never-tiring crowd in Space or get the closest thing to downtime in this town by sipping on a cocktail in San Antonio. 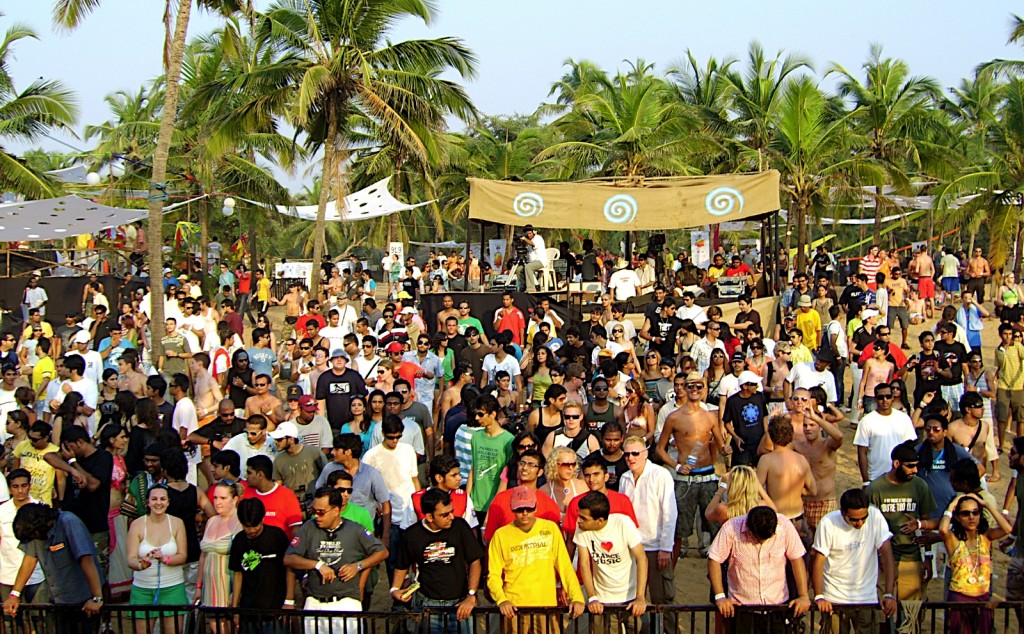 Sunburn is an electronic dance music Festival held at Candolim Beach in Goa, India every year which offers an intoxicated mix of music, entertainment, food, and shopping. Throughout three days, the multiple stages of the Candolim Beach present a world-class series of international performers.

The first Sunburn Festival was held in 2007 with 36 national and international artists drawing in close to 10,000 people. Since then the event has continued to grow.

Sunburn Festival oscillates between Christmas and New Year’s Eve, and with its much touted massive range and full on entertainment enticing all to have an electronic mix experience. 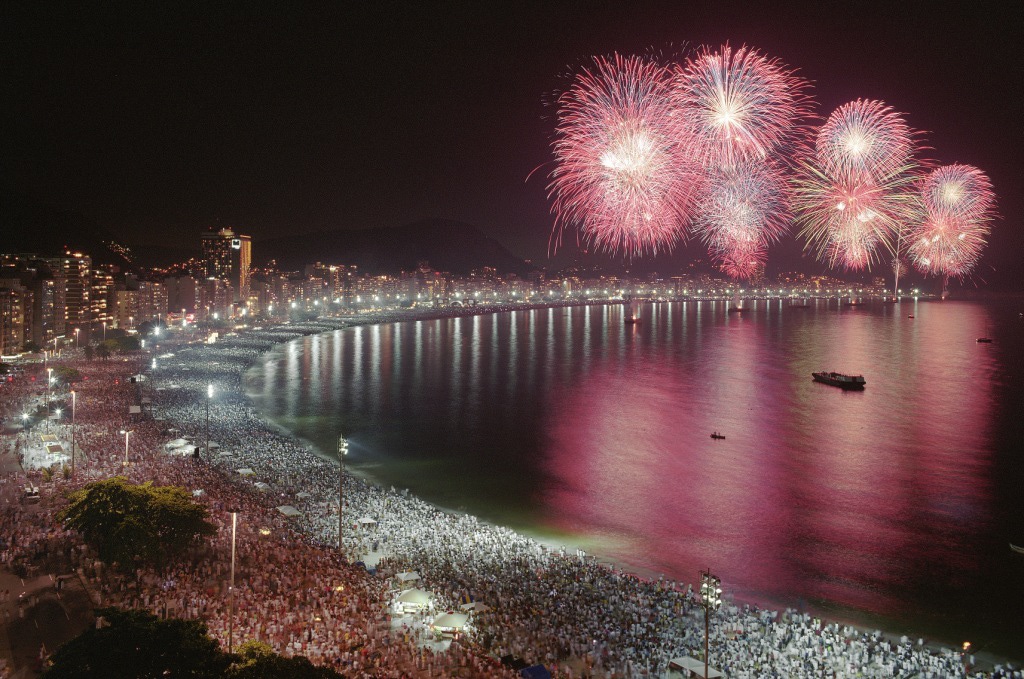 From Carnival to epic New Year celebrations, every day is a beach party on Copacabana beach. The beach scene on Copacabana consists of teeny tiny bikinis, bronzed bodies, and people in their thousands, all swarming on this most famous of beaches.

When the sun goes down the party really gets started: sipping caipirinha, dancing to the samba beats, watching the beautiful people with the impossible-to-recreate Rio vibe as the undercurrent.

One of the best ways to welcome the New Year is to join the party on Rio’s mighty Copacabana beach, where the spiritual and the secular come together for one amazing night. Rio’s biggest holiday after its spectacular and rowdy Carnaval sees around two million people pack the sands to welcome in the New Year.

On New Year’s Eve from about 8pm, top bands perform on stages strung out along the 4km-long beach, pumping out a variety of Brazilian and international music. At midnight, a spectacular fireworks display lights up the night sky for up to 20 minutes. The hardest of partiers keep things going all night long; then watch the sun rise the next morning. 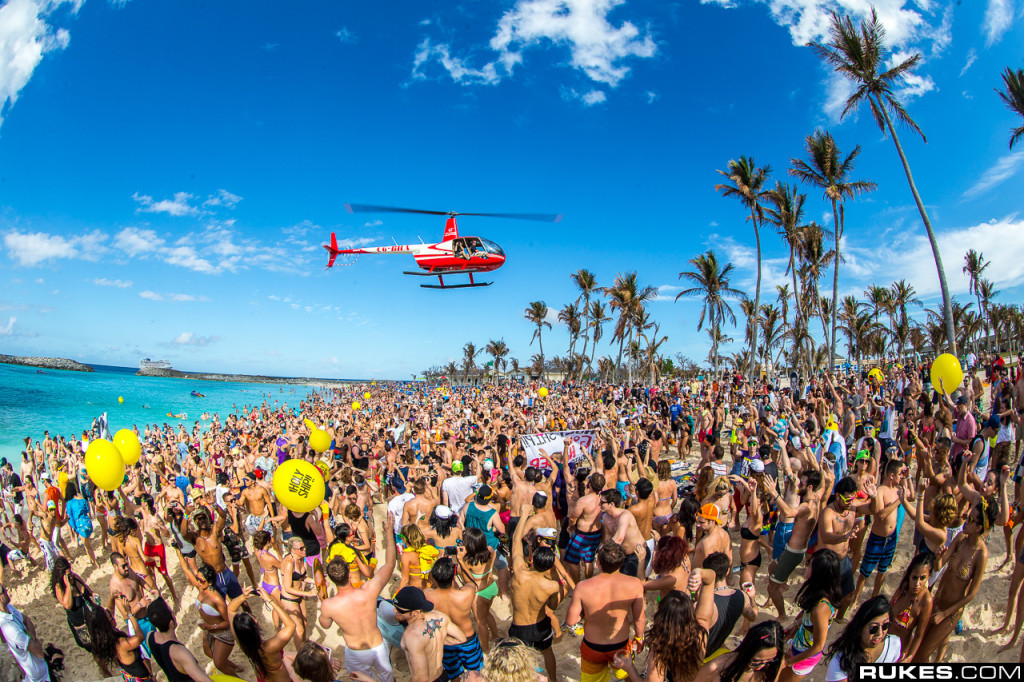 What kind of a party beach round up would be complete without a nod to the home of the party, Miami Beach? Immortalised in Will Smith’s 1998 Miami lyrics, Miami Beach is the most moth-to-a-flame beach destinations for sun and fun seekers in the world.

Drizzled in retro neon lights, art deco architecture and enough bars and clubs to keep many a spring breaker inebriated, Miami Beach is practically a rite of partying passage. What’s more, there are few better ways to wash away a hangover than a dip in the Atlantic Ocean.

Miami Beach is a coastal resort city in Miami-Dade County, Florida, United States. The municipality is located on a series of natural and man-made barrier islands between the Atlantic Ocean and Biscayne Bay, the latter which separates the Beach from Miami city proper. Best enjoy partying at Miami Beach during spring break. 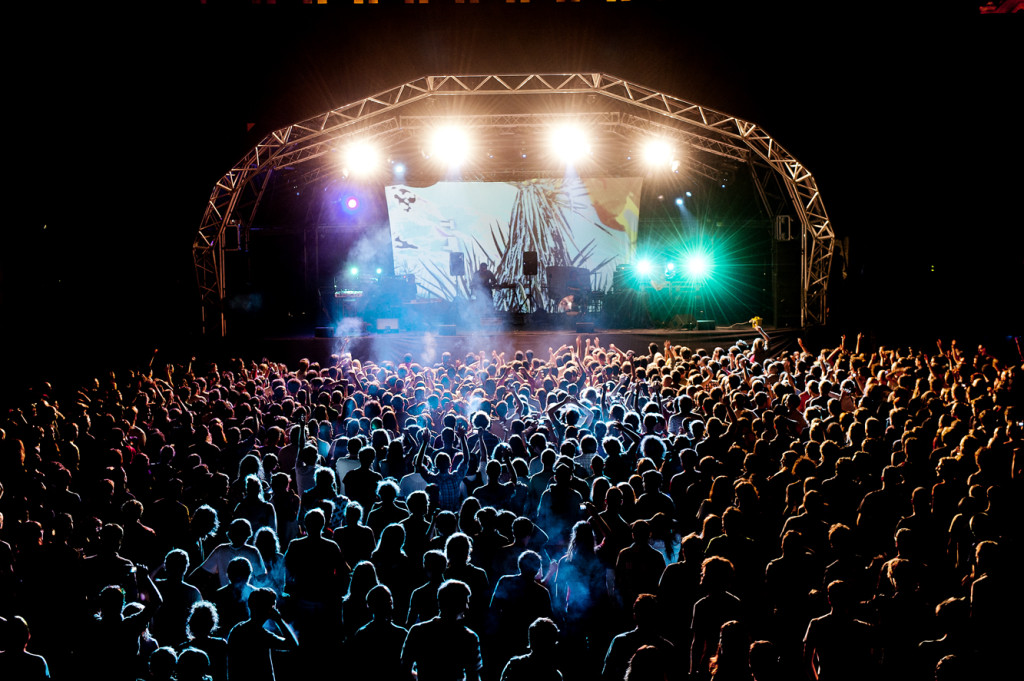 With a stunning beach location wedged between Valencia and Barcelona on the east coast of Spain, Benicassim is arguably one of Europe’s best-placed festivals. Fortunately for beach-party lovers, the last day of the four-day festival is always marked by an incredible beach party right on the sand, where suntanned youngsters grab their San Miguel beers and dance beside the shimmering Mediterranean.

The festival usually takes place in July and focuses mainly on pop, rock and electronica artists, as well as having other elements including short films, fashion shows and art. Benicassim has a reputation as being among the best on the international festival circuit.

Benicassim Festival is notable for being located in close proximity to several beaches, having bands play later in the day (5pm – 8am), and attracting a young, party-orientated crowd. The festival begins on the second Monday of July when the camping grounds open, although music only officially commences during Thursday afternoon.

In 2009, the festival capacity exceeded 50,000 people for the first time and continues to grow, being popular among many Britons due to the good weather. Past performers include Franz Ferdinand, Arctic Monkeys, Oasis and Bob Dylan.