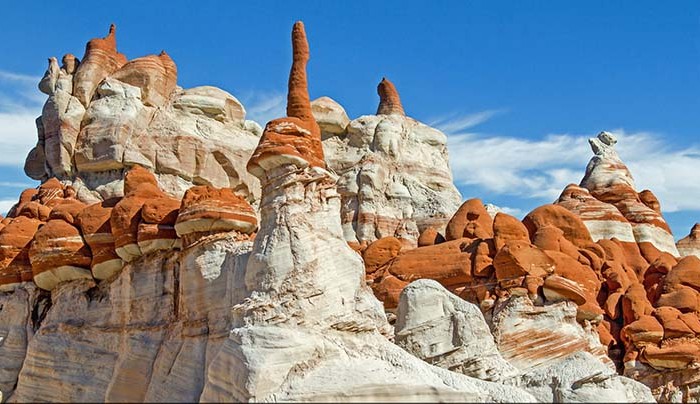 The Blue Canyon of Arizona is a geologically astonishing area in Arizona, US. Home to some of the more impressive Hoodoo rock formations, this area is also characterised by the peculiar white patterns that spread like cobwebs over the red rocks. 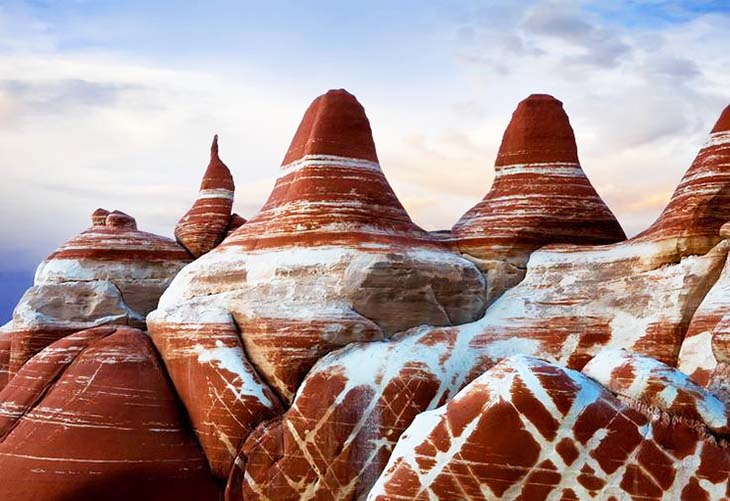 The Blue Canyon of Arizona and its oddly shaped rock formations. Photo by Cecil Whitt

To the untrained observer this odd sight puts in mind an exceptionally inept painter; however the cause for such decolourisation can instead by attributed to the chemical and mechanical weathering of the rock itself, causing decay and colour change. An alternate theory suggests that the canyon rocks may have leached elements from surrounding areas. 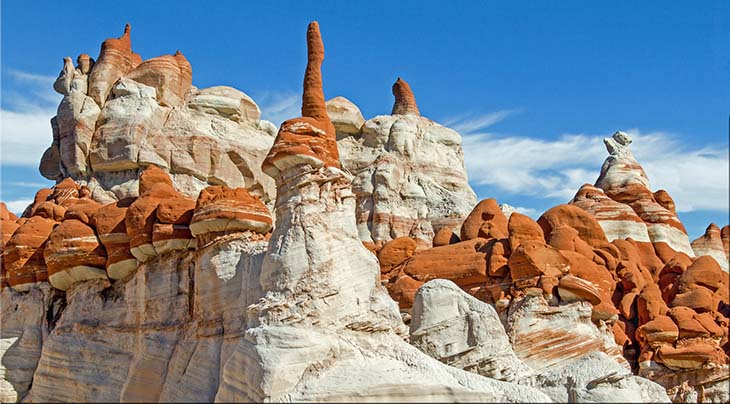 The Hoodoo formations of Blue Canyon. Photo by Patrick Berden

In any case it has to be said that these incredible formations are breath taking to see. So come with us exploring the wind swept white rocks of Blue Canyon in Arizona.

It spans the border between Navajo and Hopi reservations

The Blue Canyon like many natural areas in the US are controlled by the Native American people. This particular stretch of land falls within the Hopi tribe’s land, as such to travel throughout the canyon a permit has to be obtained. These are fairly easy to get, a call to the Office of Hopi Lands and a quick discussion will get you all the necessary information that you will need. 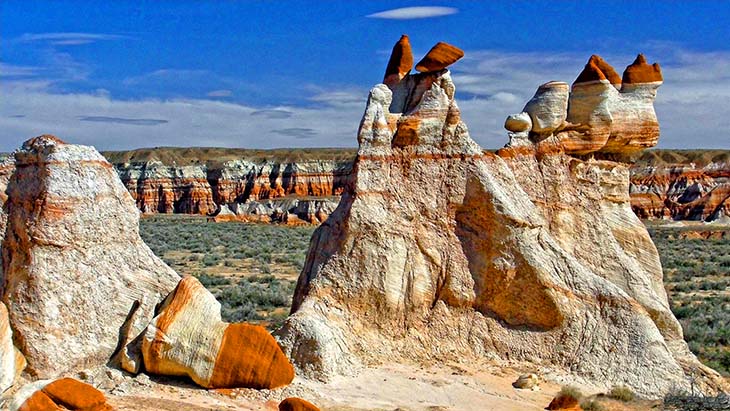 The discoloured rocks stretch out through the whole canyon. Photo by Kalaman Photography

We would also suggest bringing a lot of water and sunscreen. No matter the time of year that you travel, the canyon can get extremely hot and you will dehydrate very quickly in the sun. Bring a hat as well; prolonged exposure to the sun can be pretty damaging and you’ll be able to explore for longer if you can keep cool. Hiking shoes are another must, this isn’t a popular tourist spot and there aren’t paved paths. If you go the Blue Canyon then be prepared for rough terrain and a lot of walking.

Because this attraction is far less known to the tourist industry, there are no easy public transport methods to get to the area. So we suggest hiring out a car when in Arizona and driving up to the canyon. 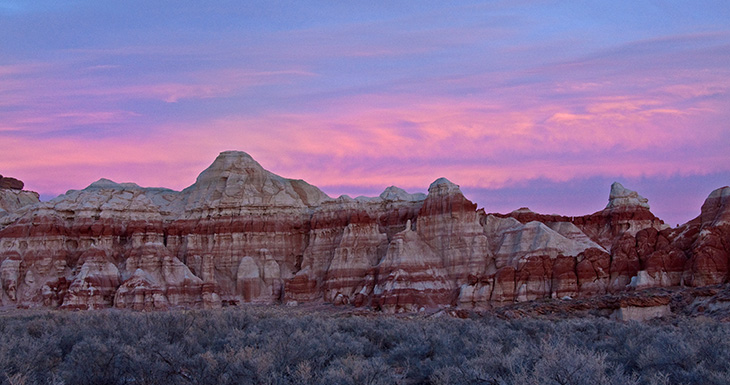 The Blue canyon at dusk. Photo via wikimedia

Having a car to use is a fantastic way of moving around the US as there are so many sights to see off the beaten track, so after the Blue Canyon you can travel around to the more touristy attractions like the Grand Canyon or The Wave in the Vermillion Cliffs.

When is the best time to go?

We suggest going to Arizona during the Spring months. This is due to the consistent temperatures which are missed in the other months. Be warned that if you travel during the Summer and Autumn months be prepared for 40 degree days, made worse in the desert landscape. Winter is another potential option however the potential for rain is much greater. 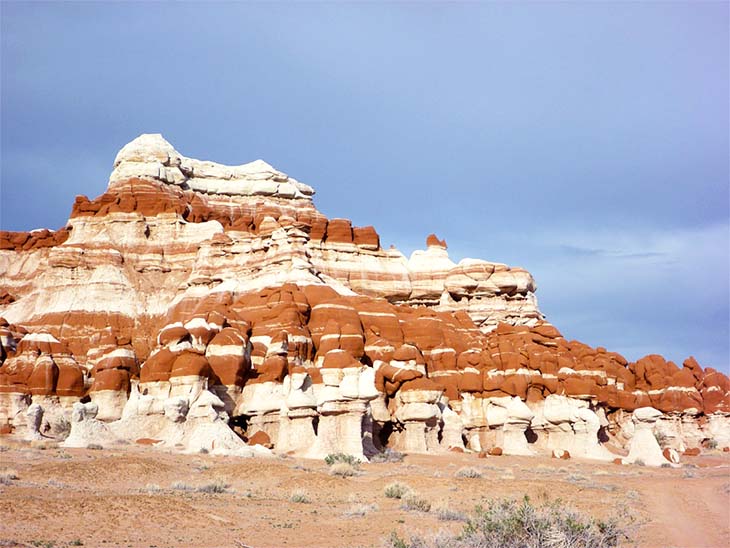 Unsurprisingly the Blue Canyon is a day trip kind of deal. There aren’t places to stay within the canyon and the amount of other activities to do around the area is lacking. We would suggest staying in Phoenix, being the capital of Arizona there is a lot to do and see around the place which gives you lots of options when not in the Canyon. 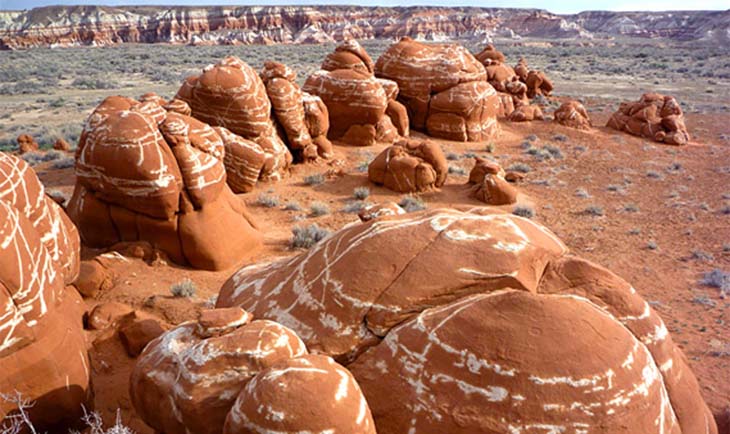 The Homewood Suites in North Phoenix is an awesome base of operations, offering great pricing and very friendly service in a convenient location. From the outside this hotel may look pretty basic but it has everything that you will need to have a more than comfortable stay.