On the road: Travelling west to east by motorcycle in Java (part 2)

Java is the most populated, the most diverse and the most vibrant of Indonesia’s nearly 17,000 islands. With 120 million people sharing such a small island (over 10 million reside in Jakarta, the nation’s capital, alone) it is little surprise that much of Indonesia’s economic and cultural identity is determined within Java.

Travelling west to east by motorcycle in Java 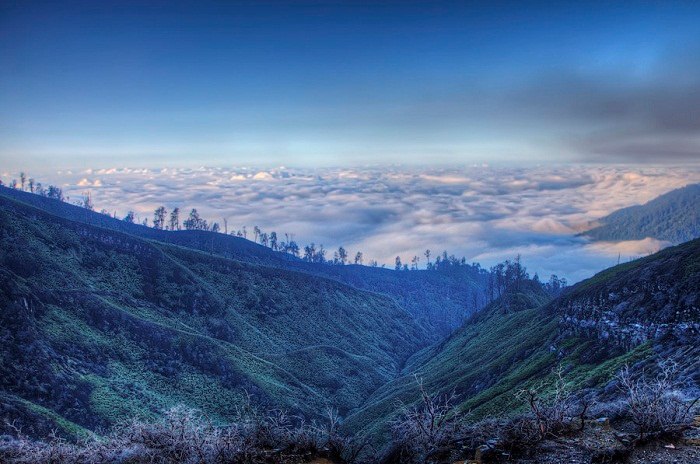 The view at dawn from above the clouds at Ijen Crater in Java. Photo by Jimmy McIntyre, Flickr

Jakarta is the island’s hub and Indonesia’s centrepiece in its drive towards modernity but there is far more on offer here than just this sprawling metropolis.

Explore the back roads of Java in search for endangered rhinos 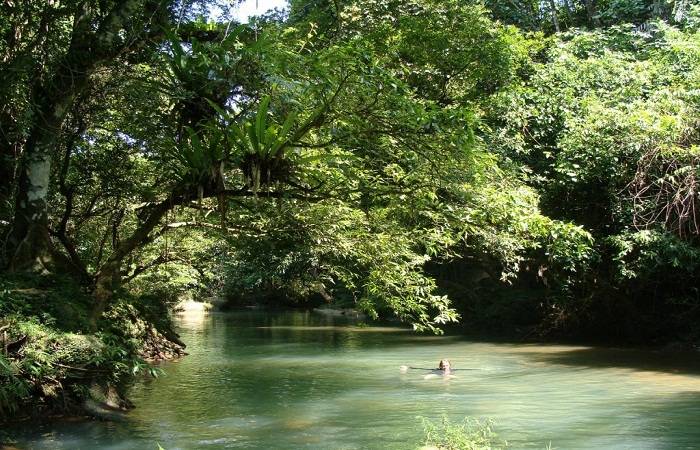 The small town of Merak where the vehicle ferry arrives is just as ugly as its counterpart in Sumatra, but drive south and you will find Ujung Kulon National Park, Indonesia’s first national park and one of the most stunning areas of natural beauty in all of Indonesia.

The park is home to the world’s last population of one-horned Javanese rhinos (only about 40-50 remain) along with unique assortment of Javanese wildlife including wild pigs, otters, banteng (wild cattle), panthers, monitor lizards and many more. Most people take tours into the national park but it is possible to drive to the village of Tamanjaya and explore the park on your own terms from there.

If nature is not your thing you can reach the capital of Indonesia, Jakarta in about 3-4 hours from Merak. Not only is Jakarta the biggest city in Indonesia, it is now truly one of the world’s great metropolises. 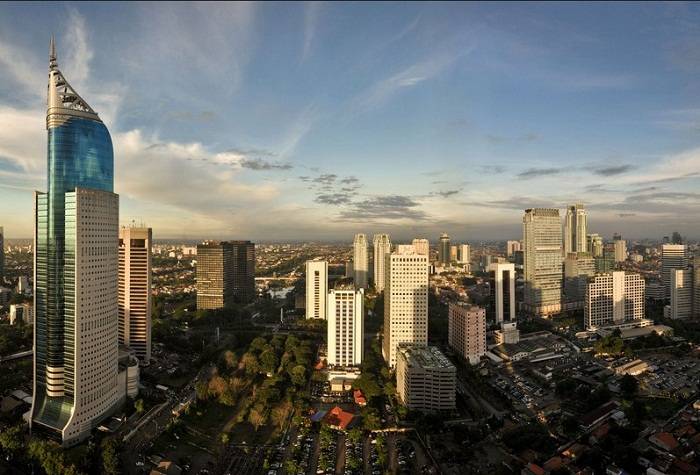 Jakarta is Indonesia’s modern metropolis with a skyline to match. Photo by The Diary of a Hotel Ad

No other place in the nation exhibits the Indonesia’s rapid transformation and overwhelming extremes better than Jakarta and the city’s dynamism has created interesting contrasts. The old town of Kota was once the Dutch colonial hub of Indonesia and is a great place to explore the nation’s history, whilst the financial and commercial area to the north reveals decadence symptomatic of modern Indonesia. 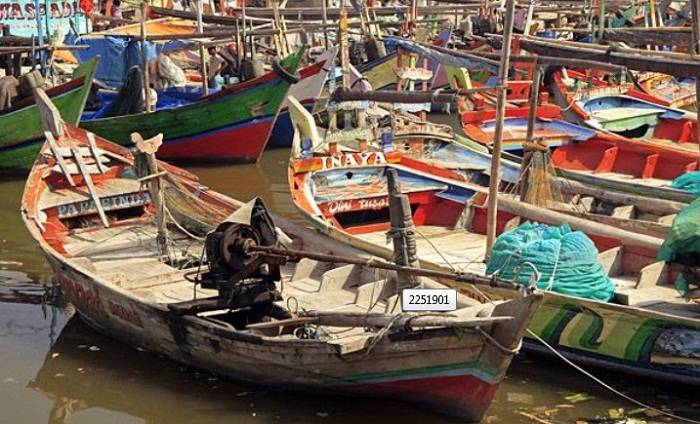 The harbour in Cirebonis filled with fishing boats. Photo by Peter Treanor

It can be surreal to see sophisticated mega-malls being built almost as fast as the slums beside them but the contrasts that are so obvious in Jakarta reveal the trend for all of Indonesia and there is no better place to get an understanding of this unique nation.

A three-hour drive south from Jakarta will take you to the green oasis of Bogor and Mount Pangrango. The rapid expansion of Jakarta has somewhat compromised the natural beauty here but it is a great area to drive through and the lush botanical gardens should not be missed. 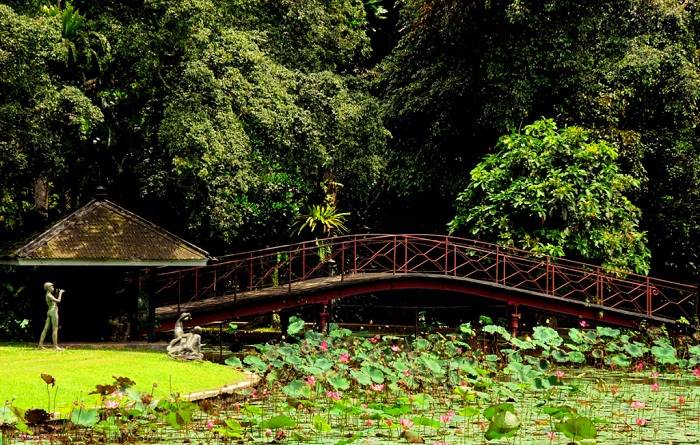 Three hours driving east will take you to Bandung, which is a great place from which to explore by motorbike the surrounding Javanese countryside. The city itself has grown into a sprawling mess of textile factories, multiplexes and markets but the volcanic peaks, hotsprings and tea plantations that lie within an hour’s drive should be enough reason to spend a night or two here.

After visiting two of Java’s most busy and bustling cities, a change of pace may be necessary and the laid-back nature of coastal Cirebon makes it the perfect place for a pit-stop as you head further east. Alternatively take the scenic 6-7 hour coastal drive from Bandung to Yogyakarta or Solo in one go and get a glimpse of the traditional Javanese fishing villages that lie between. 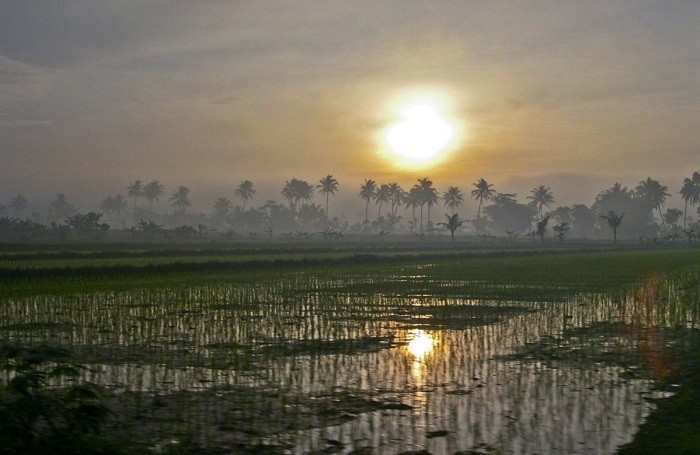 The neighbouring cities of Yogyakarta and Surakarta (more commonly called Solo within Indonesia) are regarded as the cultural hub of Java and renowned for their art, ballet, drama, music and poetry. Traditional crafts such as batik are especially well represented. Perhaps due to the strength of cultural identity here, these cities are perhaps the least westernised cities in Java and provide a look at a unique lifestyle you won’t find in Jakarta or any other major city on the island.

No trip to this region would be complete without a day trip to Borubodur, a colossal Buddhist temple structure rising out of rice-fields and towering over swaying palm trees. Java, like Sumatra, is predominantly Muslim yet this area has a long history of Buddhist activity dating back much further than the Muslim expansion into Indonesia.

Over 1200 years old, Borubodur has survived volcanic eruptions, earthquakes, terrorist attacks and a multitude of political upheavals and remains as visually spectacular as it must have been all that time ago. This area is commonly known as the “garden of Java” and if you have the time it is well worth spending more than a day exploring the region.

By motorbike it is easy to visit the three Buddhist monasteries nearby or simply tour the extraordinarily green landscape whilst the people welcome visitors more readily than many other parts of Java. 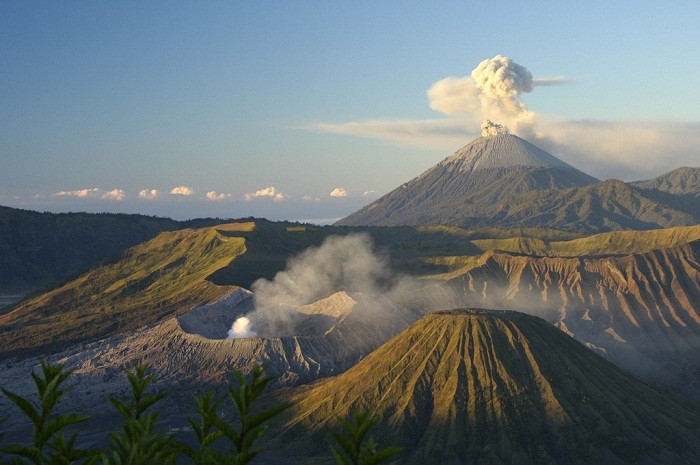 Mount Bromo National Park is another must-see and climbing the immense Gunung Bromo is not only a physical achievement but extremely rewarding. Reaching the enormity of the Tengger crater with the morning highland light is an experience that can only be described as visually superb and the ethereal beauty of the scenery is rivaled by few other locations in Indonesia. From Yogyakarta or Surakarta it is about a 6-hour drive to the charming small town of Cemoro Lawang, which has some reasonable accommodation and is a great base for tours of the mountain or surrounding parklands.

Finally, we must travel to our point of departure on the eastern Javanese coastline, Ketapang. This route is extremely popular with much traffic between the islands and the ferry leaving roughly every hour 24hrs a day taking just 20 minutes to reach Bali’s western port of Gilimanuk.

Some of the best places to stay along the way

Jakarta is the most expensive city in Indonesia and this is reflected in the price of accommodation. It is possible to find budget accommodation but expect to haggle hard even during the off-season to get a decent price. The city centre is packed with luxury hotels and offer great skyline views for those with money to burn. Jalan Jaksa is the low to mid range accommodation area and has become a bit of a backpacker hub. A number of homestays operate with simple but clean rooms and prices around 5 USD per night. Another good backpacker area is Cikini, which doesn’t have as many traveller resources but has some decent budget options.

A lot of Bandung’s budget options are conveniently located close to the city centre and train stations. Homestays in the area will cost between 5 and 10 USD per night whilst there are also a number of quality midrange options which will set you back between 10 and 20 USD. Most of the more luxurious accommodation lies on the outskirts away from the bustling centre of Bandung and offer private shuttle buses to reach town.

The neighbouring, and traditionally rival, towns of Yogyakarta and Solo have become popular tourist destinations in Java through a combination of strong cultural traditions and a proximity to the tourist magnets of Borubodur and Mount Bromo. In Yogyakarta, the area surrounding Jalan Sosrowijayan is well-known as a back-packer hub and most of the budget-midrange accommodation can be found there.

Accommodation tends to become more expensive as you get to the outskirts of the city and into the wonderful countryside of this area. Jalan Malioboro, just down the road, is one of Indonesia’s most popular shopping promenades and well worth a visit for the highly original gift ideas. There is no particular area of Solo (also commonly known as Surakarta) where tourists gather. Instead, budget, midrange and high-end accommodation spread seemingly at random throughout the city. Take care to pre-book accommodation and get directions, as it can be notoriously difficult to find accommodation on arrival.

The best time to travel by motorcycle through Java 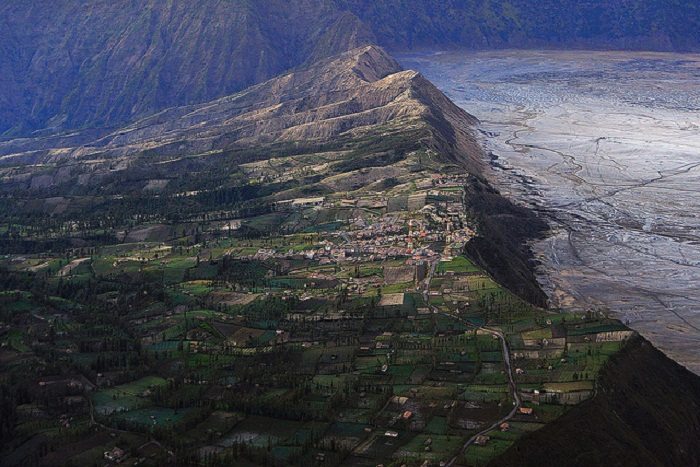 Gunung Bromo is built on the edge of a volcano. Photo by Anan Charoenkal

The best time to travel to Java is in the dry season between May and September. Travel at other times is still possible, but the frequent rain clouds might mean some last minute changes of plan or extended transit times as the transport invariably suffers during the rainy season. If you are visiting Java with the idea of visiting Ujung Kulon National Park, than the wildlife is much more active during the rainy seasons and this might affect your decisions of when to go. The mating season of the one-horned rhino is right in the middle of the wet season so there is a much higher chance of getting a sighting during this period.