7 great places for backpackers to visit in New Zealand 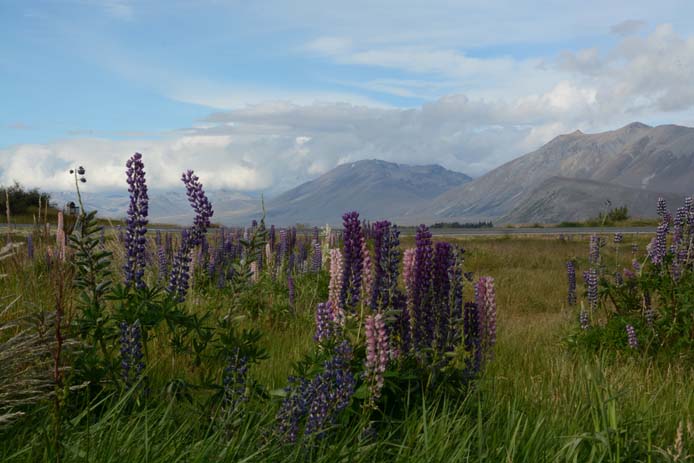 New Zealand is known for its wild landscapes and scenery. Photo via cashimor, flickr

New Zealand is one of the most beautiful countries in the world, with outstanding luscious scenery and an abundance of things for the thrill-seeker traveller to do. It is a country known for volcanoes, glaciers, stunning bush land, deep caves and beautiful beaches. This is the place to be for backpackers; the action and adrenalin, the spacious landscape and the thrilling outdoor lifestyle are what appeals to travellers flocking to New Zealand each year. To help you out, check out these 7 great places for backpackers to visit in New Zealand below.

New Zealand is made up of two main islands – The north and the south and both of which have different things to offer to travellers. The North Island is home to Auckland, the most populated city; to the capital city Wellington, and to dozens of active and inactive volcanoes. The South Island presents an array of landscapes and national parks; with glaciers, alpine lakes and some of the most famous ski slopes in the world. To get the most out of your visit to New Zealand ere are seven of the best places to travel to: 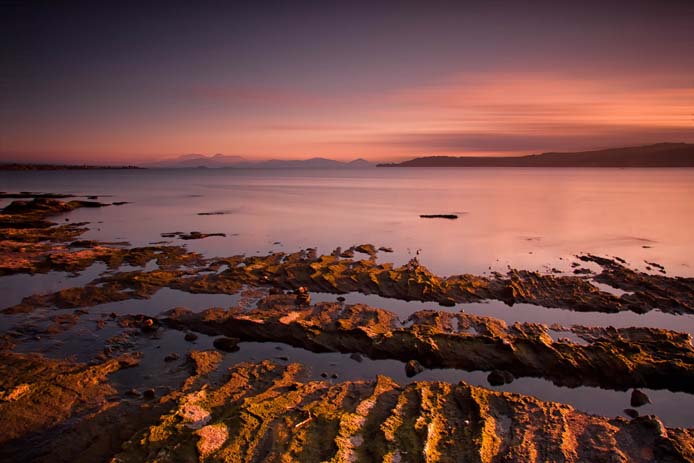 Settle at sunset on Lake Taupo after a long day of water activities. Photo by Simon Cartwright, flickr

Nature’s playground, Lake Taupo has everything there is to offer for water sports and adventuring. The best time to travel to Lake Taupo is in the summer, to get the most out of everything the area has to offer. This is a great destination for families, with rafting, swimming, kayaking offered, as well as bike riding, hiking, fly fishing and rock climbing. Lake Taupo is one of the largest freshwater lakes in Australasia and is known for its role in the Lord of the Rings trilogy. For fishing enthusiasts, this is the place to be; with both brown and rainbow trout being heavily populated in the area. Make sure to catch the Maori rock carvings on the cliffs of Mine Bay. 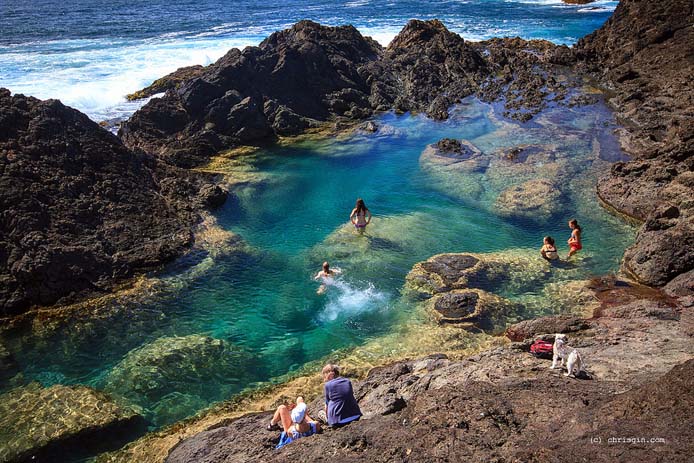 Spectacular beaches and stunning mermaid pools, perfect at low tide are what bring tourists to Matapouri Bay. Walk along the beach towards the North end to locate the cove and the track that leads you to the pools. From the pools, located on a hill in a secluded cove, you have spectacular views of the beach. The only time to go is low tide! It becomes a hazard at high tide as most of the pools are covered up by water and it becomes slippery. Once you get there, slip into the feeling of complete satisfaction whilst diving into the natural pools. The water is impeccably blue, and the scene is like one from a film. Take in the serenity, there’s not enough places on earth that are as great as this one. The pools are deep enough for you to dive into, so be adventurous and jump from a nearby rock. Just be careful because more often than not, the rocks are wet and slippery. 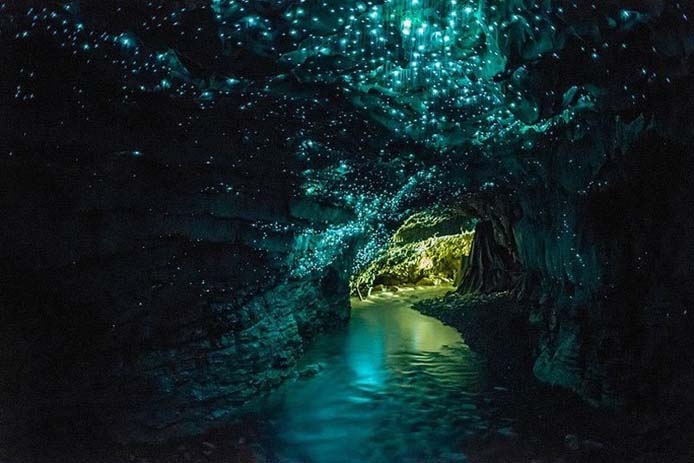 The Waitomo Glowworm caves give the impression of a majestic starry night. Photo by Tim Spaulding, flickr

Nestled in a tiny community on the North island is Waitomo, home to a world famous caving system dating over two million years old. There are a number of main tourist caves in the area, the most popular being the Glowworm Cave, for all the right reasons. This cave in particular is home to an exclusively Kiwi glowworm that make the cave seem out of this world. You can visit the cave through a guided tour, which brings you through three different levels; beginning at the top. The levels are linked by a 16m vertical shaft, made of limestone which is heavily evident within the cave and surrounding areas. The tour travels from the Catacombs, down to the Banquet chamber, before finally reaching the Cathedral where the tour is finished with a boat ride in the underground river system. The glowworms living in the cave walls are the only light source along the boat ride, giving the impression of a sky of living lights or stars. The Ruakuri and Aranui Caves are also in the same system as the Waitomo glowworm cave. If you are feeling more adventurous, you can travel independently into the caves – however, it is always best to go with a professional of the area or system, as recreational caving can often be dangerous. 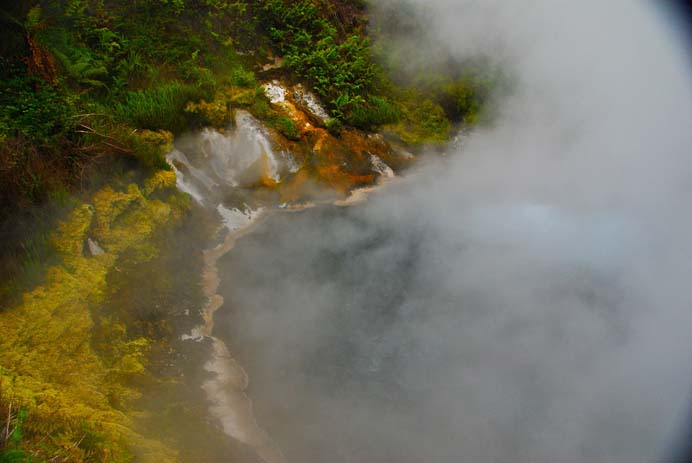 The cultural city of Rotorua is famous for hot springs and delightful mud pools. Photo by Ellen De Young, flickr

Rotorua is a place full of fascinating and traditional culture. It is a place full of history for Maori people, and is home to some of the best hot springs and mud pools in New Zealand. The city has been nicknamed the “Sulphur city” due to its location close to thermal springs and volcanoes. The hydrogen sulphide emissions around the city often give off a pungent smell, but don’t be put off by that – the city has a lot of natural beauties to offer. Make sure to visit the Government Gardens and Whakerewarewa Forest which is great for mountain biking enthusiasts. There are also several stunning lakes in the area, the largest being Lake Rotorua, great for kayaking and swimming. Make sure to visit the Museum and Rotorua Bath House for an insight to Maori heritage and culture.

Side note: for those travels who are also movie enthusiasts, travel approximately an hour inland from Rotorua to a place called Matamata, the site of Hobbiton, where the Lord of the Rings trilogy was filmed. Here you’ll find what’s known in the films as “The Shire” and you’ll be able to experience what it’s like to live as a Hobbit. Daily tours are available to visit the movie set. 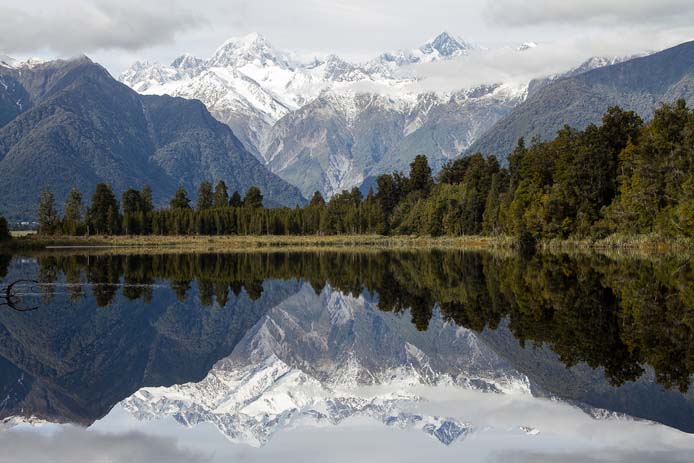 Lake Matheson gives a mirrored view of the Fox Glacier on the West Coast. Photo by Geee Kay, flickr

Known by the locals as “the coast”, the west coast of the Southern Island of New Zealand runs over 600km and has plenty to offer. The biggest town in the area is Greymouth, but it’s best to have your own transport in this area; there’s so much to see and do. There are over eight unique areas, ranging from Westport and Karamea, Reefton, to the Great Coast Road, Greymouth, the Lakes District, Jade Country and then finally the Glacier Country in the far south. Each area has something different to offer – caves, rainforest, glaciers, ski slopes, national parks, deserted beaches; something for everybody.  It’s recommended that you visit the Denniston Plateau; venturing into underground mines, walk in sections of the Heaphy Track for luscious coastal beauty, visit the Oparara Valley for one of the largest limestone arches in the world, see the Hokitika Gorge for amazing turquoise water, embark on a glacier encounter at either Fox Glacier or Franz Josef to get up close and personal to one of the worlds’ most astounding phenomena, cycle on the west coast wilderness trail, and visit the Pancake Rocks from blowholes at high tide and magnificent limestone rocks that resemble pancakes! This place is action packed. 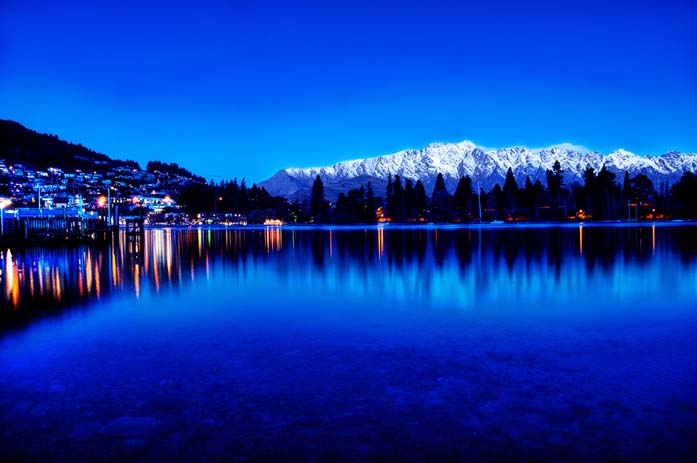 Queenstown shadowed by the snowy mountains in the distance. Photo by Sprengben, flickr

One of New Zealand’s top visitor areas, Queenstown is famous for lake and mountain landscapes, as well as activities for those of us who prefer to indulge in the finer things in life. For the more relaxing traveler, visit one of the many spas in the town; get a massage or beauty treatment before heading into the city for boutique shopping and outstanding wine and food. For thrill-seekers, Queenstown offers great ski slopes in the winter, as well as bungee jumping, sky diving, canyon swinging, jet boating, horse trekking and river rafting in every season. This is also a great location for sightseeing for Lord of The Rings fans, as loads of the area was used throughout the trilogy. Travel in the surrounding areas of Queenstown for the Lake District area and museum, as well as chances to go gold panning. 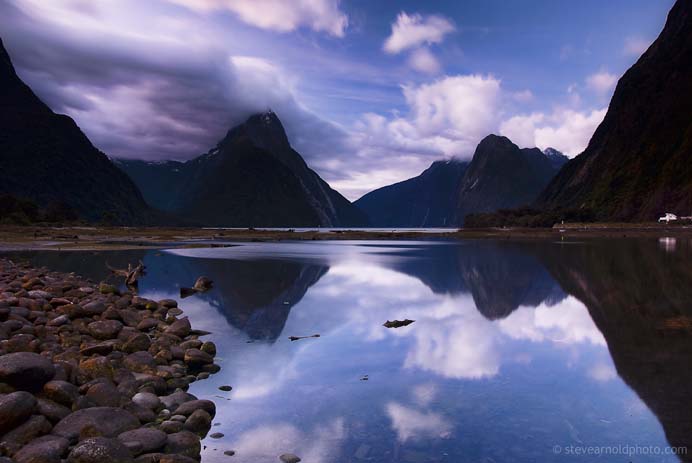 On the West Coast is Milford Sound, a majestic and untouched national park. Photo by stevoarnold, flickr

In an area completely untouched, an area of isolation and serenity is Milford Sound. Located on the west coast of the South Island, within the Fiordland National Park, Milford Sound is known for spectacular natural scenery; particularly the cliffs, mountain peaks and waterfalls. The area was carved by glaciers during the Ice Ages, and has since turned into a fjord, an area of astounding beauty in any sort of weather. The area is a known breeding ground to a number of wildlife, the most popular being the Fiordland Penguins. You also have the possibility of seeing whales and dolphins within the area. The most popular way to see this remote area is by boat, with cruises of all different calibers being offered. The most common choice is a two hour tour of the area, explaining the history of the location, as well as providing breathtaking views of the surrounding areas. Keep in mind not to be put off by rainy weather, as it often amplifies the waterfalls and makes them all the more majestic. This area is great in any sort of weather.