4 of the best hill stations in India 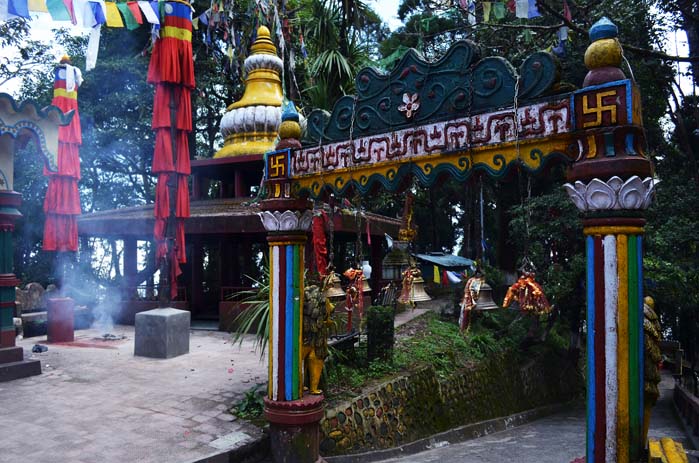 The temple of Mahakal in Darjeeling. Photo by Liam Taylor.

Cars constantly honking, hawkers harassing you for a sale and streets swelling to bursting point with a population that tops one billion. Amidst the heat, hustle and bustle of India one can easily be overwhelmed by the sheer number of people and the action around you.

Luckily, the sub-continent has an incredibly diverse landscape that has far more to offer than those enormous cities and their countless tourist attractions. It is a nation with over 20 mountain ranges and the influence of the British Empire and East India Company meant that these areas became treasured for their agricultural output and cooler temperatures. Hill stations were set up all over India and most remain to this day as scenic getaways for those that need a break from the madness below. 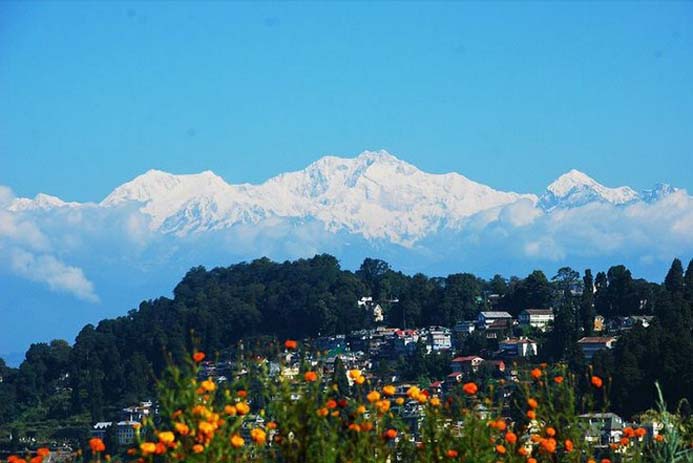 A view of the Himalayas from Darjeeling. Photo by hitfull.com

There is only one place to begin a list of India’s best hill stations and that is with its most famous one: Darjeeling. During the mid-19th century, the British established a sanitorium and military depot in the northern hills of West Bengal. It wasn’t long after that the agricultural capabilities of the land were realised and extensive tea plantations were set up throughout the region. Today, those tea plantations combine with the rolling hills and valleys of the lesser Himalayas and a backdrop of snow-capped peaks, creating one of the most scenic locations India has to offer. Thick fog rolls in over the hills near-daily, adding a melancholic and mysterious atmosphere to Darjeeling. 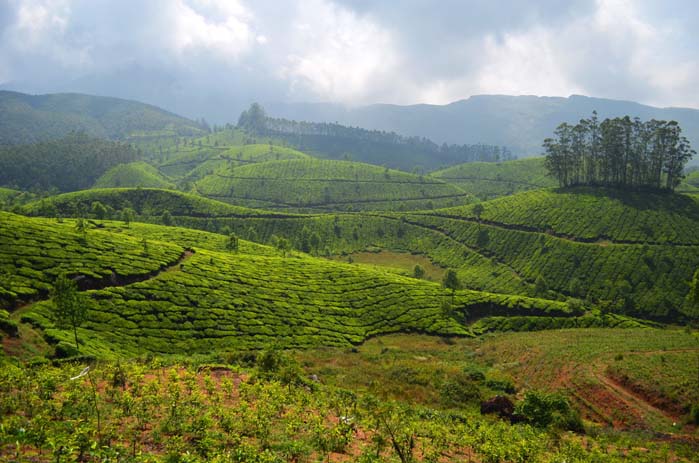 Besides the amazing scenery, the area also offers one of the most popular and well-known teas on earth, Darjeeling Black. Tea growers here combined a number of well-known black teas in order to create the hybrid, along with new fermentation techniques the world had never seen before. The result is Darjeeling tea, a distinctive blend that has gained an international reputation and become India’s national drink.

Darjeeling can only be reached by first passing through Siliguri, a small transport hub at the base of the mountains. From here you can arrange a shared or private jeep to Darjeeling, which will take around three hours. If time is of no object and you are looking for a more authentic trip, take the Darjeeling Himalayan Railway, a great feat of engineering and one of the few steam trains still in operation in India.

MORE: A SHORT GUIDE ON WHAT TO DO WHEN TRAVELLING IN INDIA 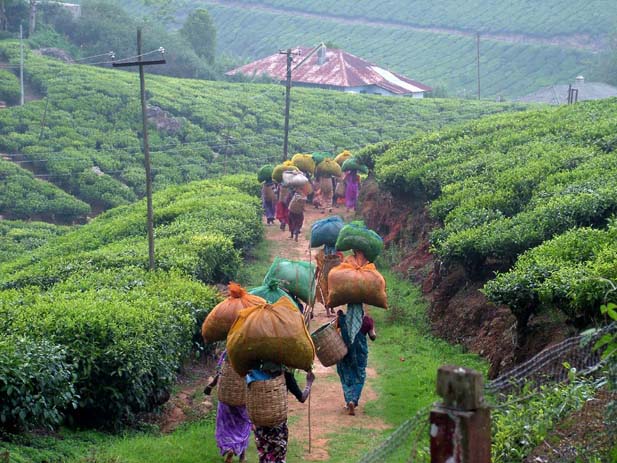 From North to South we go to the prosperous and bountiful state of Kerala. Known for its abundant seafood, hippie beaches, huge cashew plantations and houseboats on the backwaters, many travellers don’t realise there is a whole other side to Kerala just a short trip from the coastline. Munnar is Kerala’s most famous hill station and in terms of tea plantations, it rivals even Darjeeling in being shockingly green.

The area gained popularity during British rule as a summer escape from the heat of the lowlands, now it is a common destination for Indian honeymooners. Munnar offers everything from high-end resorts to backpacker lodges with cuisine from around India to match any budget. The name has been shortened from “moonu aar”, which literally translates to “three rivers”. These rivers Madupetti, Nallathanni and Periavaru are responsible for the overwhelming greenness of the region, and also form waterfalls and lakes to visit nearby.

A number of tourist operators offer coach services to Munnar from Kochi and Thiruvananthapuram, which range from first class to public buses. Alternatively, rent a bike in one of these cities and take the scenic drive yourself. You will pass through coconut palms, backwaters and cashew plantations in the lower area, before reaching lush rainforest and tea fields as you go uphill. 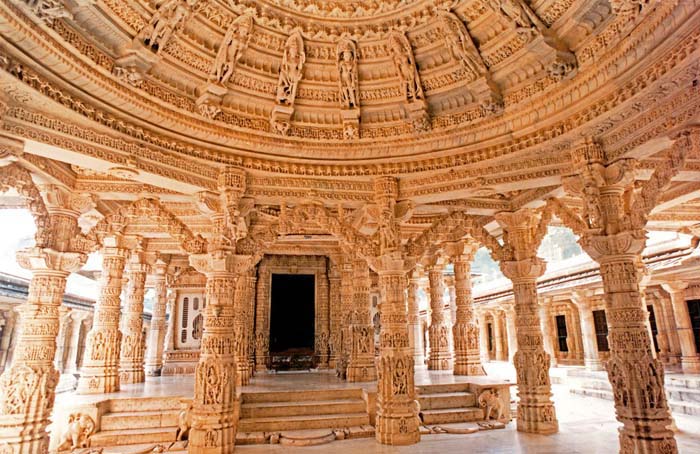 The Vimla Vashi Temple on Mount Abi. Photo by tushky.com

The glory of Rajasthan is undoubtedly in the amazing forts, colorful cities and ancient Rajput customs that are scattered throughout this desert state. The desert can be very hot and dusty though, but for those who want a quick break from the plains Mount Abu is the perfect destination.

The transformation from the rugged desert to the evergreen forests and lakes of these mountains is truly remarkable and the combination of Hindu and Jain temples here create a sense of deep-rooted spirituality. It is also home to the Mount Abu Wildlife Sanctuary, which is home to a number of endangered species such as jungle cats, sloth bears and the grey jungle fowl.

Mount Abu is easiest to reach by train and can be reached directly from most cities in Rajasthan. Of course, in Rajasthan there is always the option of a camel safari, which will certainly provide an authentic experience of the desert. Just prepare yourself for a bumpy ride. 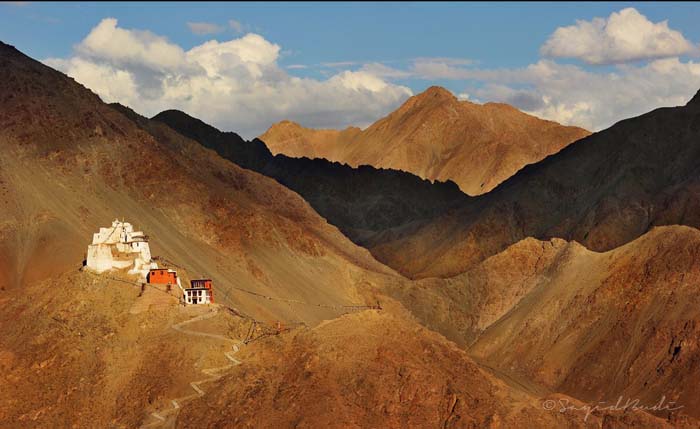 A view of the Buddhist Monastary overlooking Leh. Photo by Sayid Budi, Flickr.

Although not strictly a hill station in the British sense, we now travel to the ancient town of Leh just to show off the rich cultural diversity of India. Though now part of the Indian state of Jammu and Kashmir, the people of Leh are ethnic Tibetan and have retained their language and much of their heritage in this area.

The town is dominated by the image of a steep rocky ridge and the Tibetan-style palace and fort that overlooks it. These ancient buildings and others like the Shanti Stupa (built by Japanese monks to promote world peace) and the Tsemo Gompa (mud brick temple enshrining a three-story Buddha) are the towns biggest attractions, though the opportunity to drink ginger tea and exchange spiritual lessons and dumplings with monks is also a draw card. 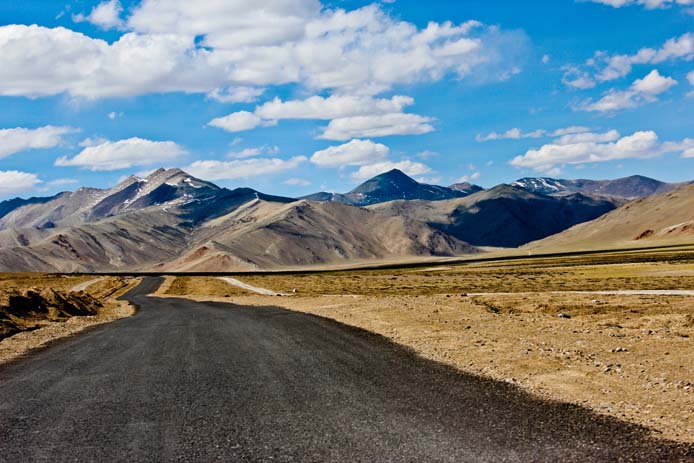 The long road to Leh. Photo by Saad Faruque, Flickr.

The only point of contention may be whether you can handle the spectacular Manali-Leh highway that winds precariously through the mountains to get there. Due to icy conditions in the winter months, the road is only open for a few months during summer; so potential visitors should check their travel dates to be sure of access.