The world’s most salty waters: Swimming in the Dead Sea

Taking a dip in the Dead Sea in Jordan is similar to crowd surfing – providing you replace the mosh-pit full of sweaty people with pristine, mineral rich water. Paddle into the lake and slowly lay back to let the salty water lift you up until you feel as light as a feather.

Here are some tips to get the most out of your salty dip in the Dead Sea. 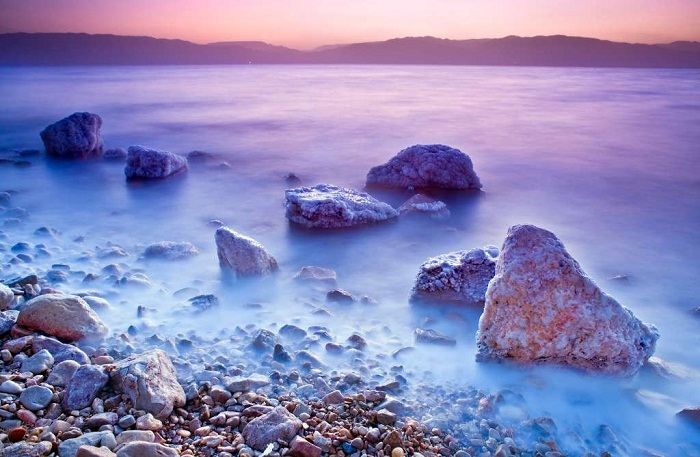 The Dead Sea is a beautiful sight located in Jordan Israel

It’s the deepest hypersaline lake in the world at just over 300 metres deep, and is almost 10 times as salty as the ocean, making it one of the world’s saltiest bodies of water. The salt levels don’t allow animals to flourish, which is how it got its name the Dead Sea. 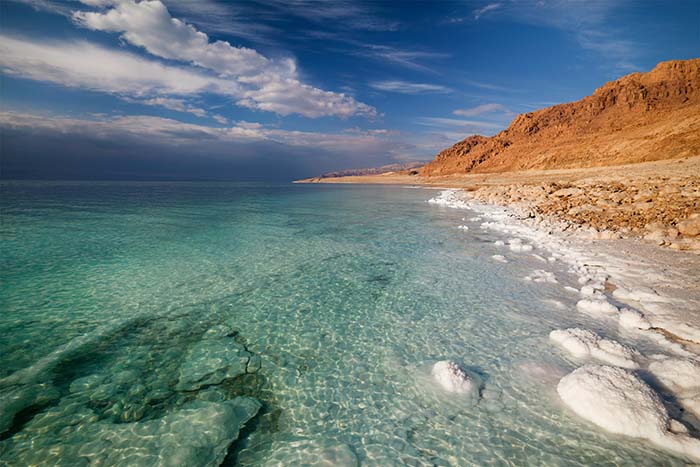 The Dead Sea has attracted visitors from around the Mediterranean basin for thousands of years. Biblically, it was a place of refuge for King David, and it was one of the world’s first health resorts for Herod the Great. The salt and minerals from the Dead Sea are commonly used to create expensive cosmetics and skincare products.

Swimming in the Dead Sea: Health effects and therapies 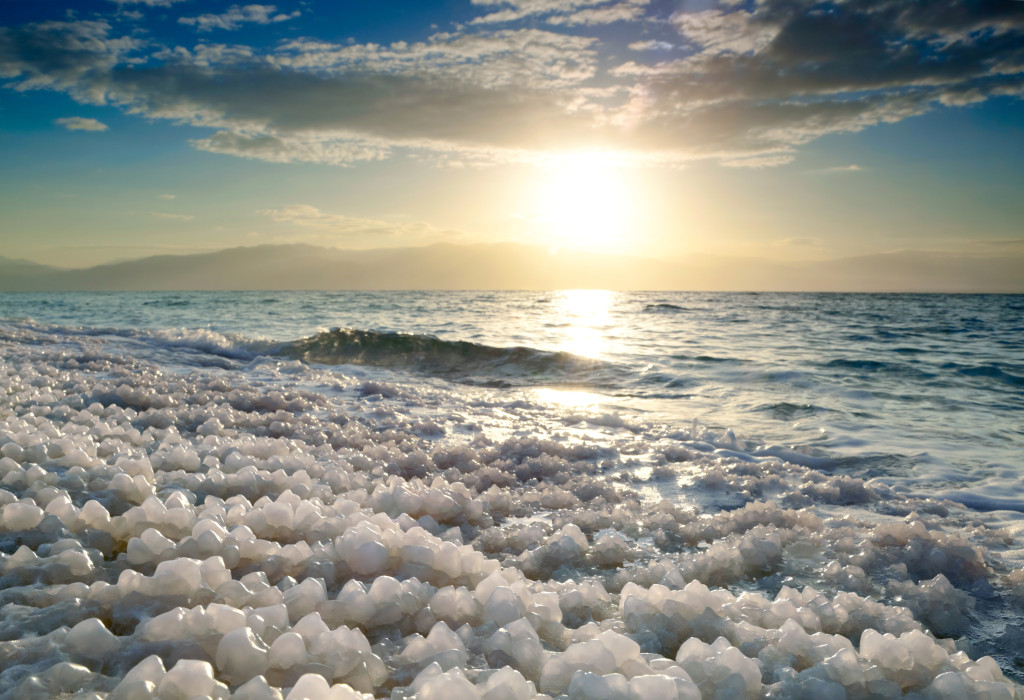 Feast your eyes on the Dead Sea at sunset. Photo by medicaltourismmag.com

Ever since ancient times people hoping to improve their health have soaked away their ailments in the healing waters of the Dead Sea. The mud is thought to be so restorative that thousands of tourists visit the Dead Sea each year, while stores around the world sell skin products made from its mud and salt crystals.

The Dead Sea’s healing power is seemingly more than just myth. The lake boasts high concentrations of magnesium, sodium, phosphates, bromides and other minerals thought to improve skin conditions as well as certain heart and lung conditions. Studies have suggested that Dead Sea minerals can improve the quality of life for psoriasis patients, hydrate the skin, and reduce roughness and inflammation. 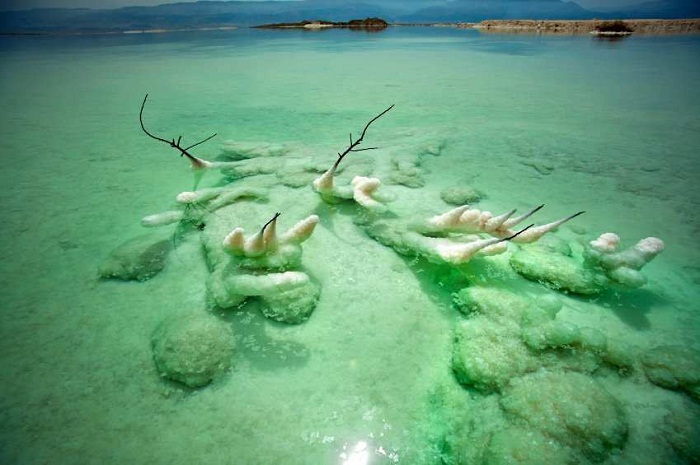 Salt crystals form on anything within the waters of the Dead Sea. Photo by mapisrael.info

Not only does Dead Sea mud contain these beneficial minerals, but it’s also been shown to kill acne-causing bacteria. Body wraps made from Dead Sea mud are a popular treatment at high-end spas in Israel and beyond, they are thought to nourish and detoxify the skin, and can even erase stretch marks and cellulite.

Why pay for expensive spa treatments and products when you can go straight to the source? Experts believe it’s not just the mineral composition of the Dead Sea that clears visitors’ skin. Sitting at the lowest point on Earth, the Dead Sea is covered by a thick haze that filters out damaging ultraviolet rays but allows therapeutic light to shine down. The filtered sunlight has proven effective in the treatment of psoriasis, and it also means you’ll be less likely to burn. 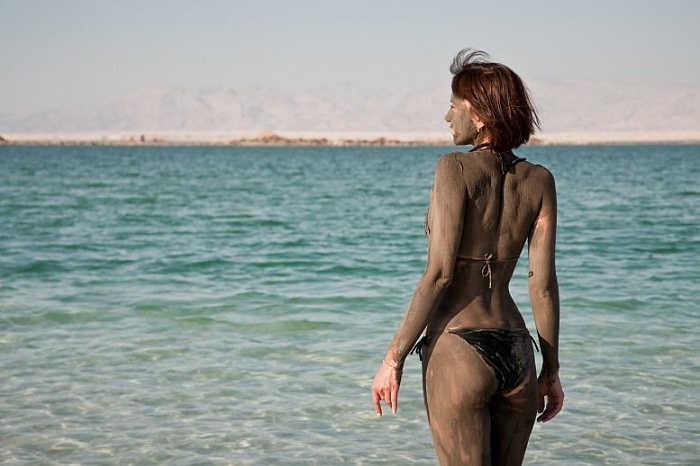 Cover yourself with mud from the Dead Sea for glowing skin. Photo by deadseajordan.info

Simply floating in the Dead Sea will allow your skin to soak up the minerals from the water. Use the mud from the bottom of the sea to make your own full body mud wrap. Simply walk a few metres into the water until you can feel it underneath your feet, dig your hands in and collect some of it to cover your body with. Let it dry and wash off when you’re feeling stiff. It will leave your skin supple and radiant from the natural benefits of the Dead Sea.

Tips for floating in the Dead Sea 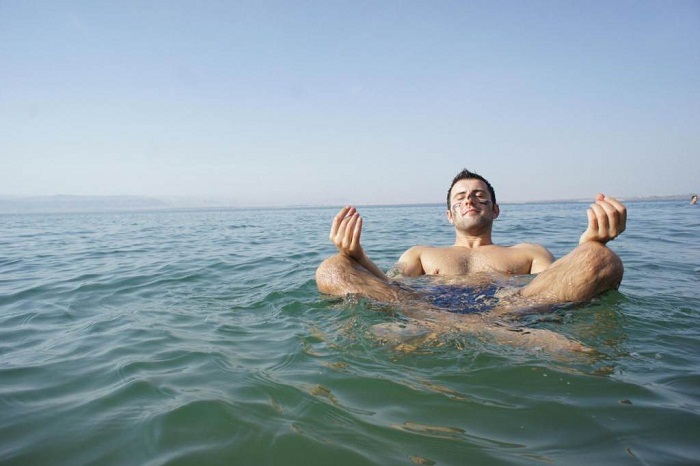 Float on the Dead Sea in Jordan, Israel. Photo by rackcdn.com

Running and jumping straight into thee turquoise, salty water of the Dead Sea wouldn’t give visitors the optimal Dead Sea experience. Here are a few tips to get the most out of your Dead Sea dip.

Unless you’re keen for a nice burning sensation, be aware of any cuts you might have or it’s literally like rubbing salt into a wound. Avoid shaving for a few days prior to your visit as shaving peels back the skin and creates the possibility of inadvertently cutting your skin, neither or which would mix well with the salt.

Lay back and relax 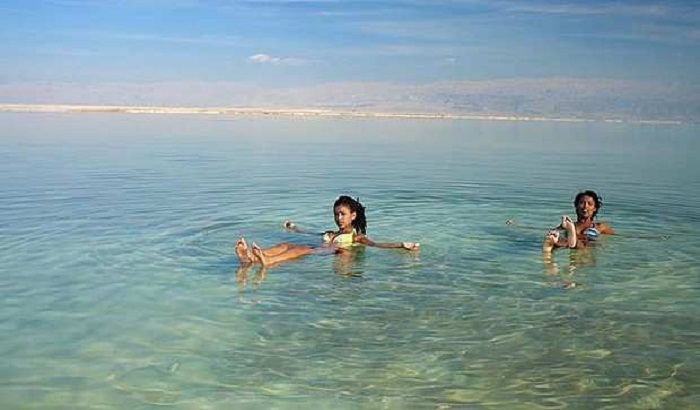 Floating in the Dead Sea. Photo by dailylife.com.au

It may seem daunting to simply “lay back” in deep and extremely salty water, but in order to float you must trust the Dead Sea to hold your weight and allow you to float. Lean back, close your eyes, and let the water carry you gently to its surface.

Salt formations in the Dead Sea. Photo by wordpress.com

Remember, you’re in the saltiest body of water in the world. You definitely don’t want to get any of this stuff in your eyes or mouth. Yuck.

Don’t stay in too long 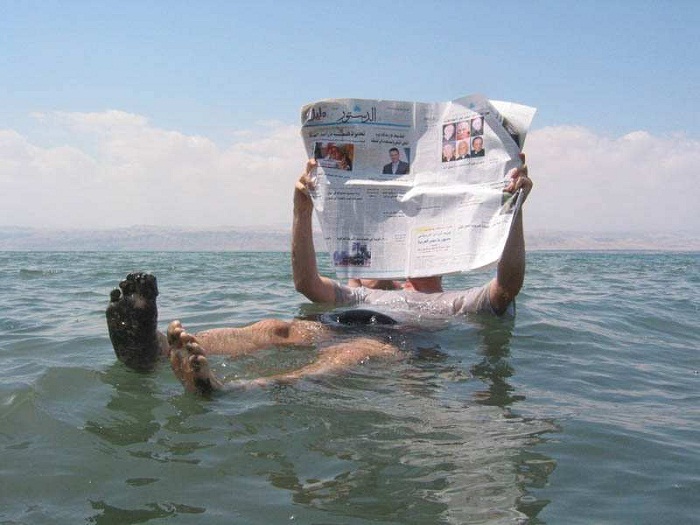 Read a newspaper while floating in the Dead Sea. Photo by wordpress.com

Your body will tell you when you’ve been in for too long as you may notice that certain areas will start to burn a little due to the salt.

Remember to wash off after

It doesn’t take too long to dry off in the hot Middle Eastern sun and when you do, you’ll notice something a little strange. Though the water has evaporated, most the salt has not, and will be on your skin in interesting little clumps. There are plenty of showers available on the beach for visitors to use to wash off the excess salt. 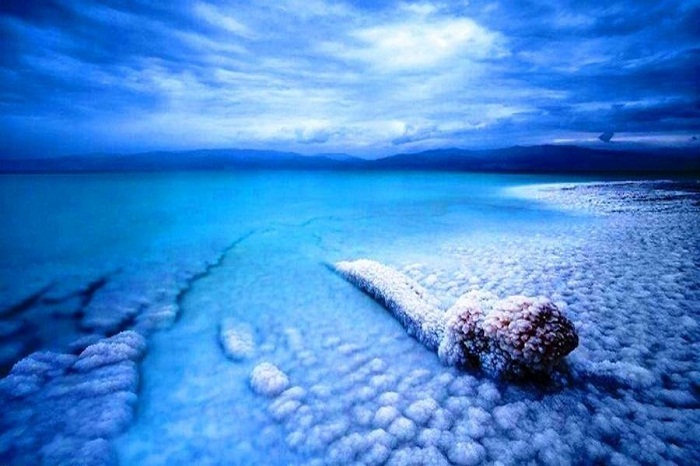 The best months to visit are between March and May, and September to November, although the Dead Sea’s climate offers year-round sunny skies and dry air. It has less than 50mm annual rainfall and a summer average temperature between 32 and 39 °C. and in winter average temperatures range between 20 and 23 °C. The region has weakened ultraviolet radiation, meaning spending time in the sun here shouldn’t turn you into a beetroot.

In times of flood, the salt content of the Dead Sea can drop from its usual 35% to 30% or lower. The Dead Sea temporarily comes to life in the wake of rainy winters. In 1980, after one encounter of a rainy winter, the normally dark blue Dead Sea turned red. Researchers from Hebrew University of Jerusalem found the Dead Sea to be teeming with a type of alga called Dunaliella – a red-pigmented bacteria which caused the astounding colour change. 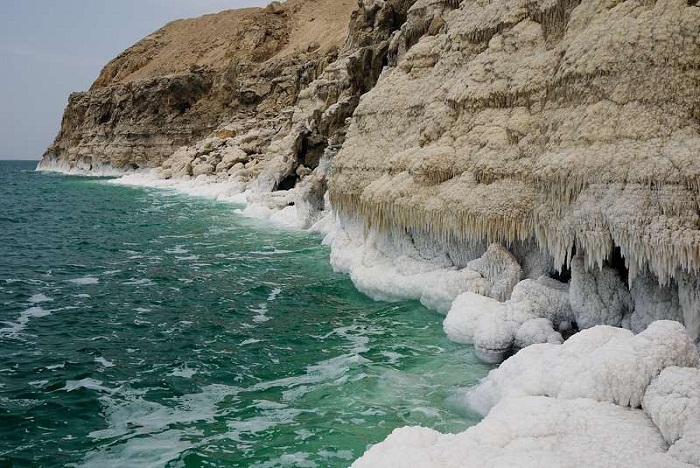 The Israeli side of the Dead Sea is a possible day trip from Jerusalem, Eilat, or Tel Aviv. There are three main road entry routes into the Dead Sea area. The first is via Highway 1 and Highway 90, through the West Bank, from the Jerusalem area.

Both Ein Gedi and Ein Bokek have public access beaches, but Ein Bokek’s beach is rumored to be the better of the two. Population services are infrequent, so make sure you check schedules before heading out. Taxis to the Dead Sea are also available.