19 skylines from the world’s most famous cities

When it comes to skylines, it seems every city in the world wants to be a contender for the tallest or the most breathtaking. While some iconic buildings such as the Empire State Building or the Burj Khalifa give their cities an edge, they can easily be trumped by adding an ancient wonder such as the Pyramids of Giza. The following are 19 skylines from the world’s most famous cities, and what makes each of them so wonderful and unique.

Skylines from the world’s most famous cities: Hong Kong, China 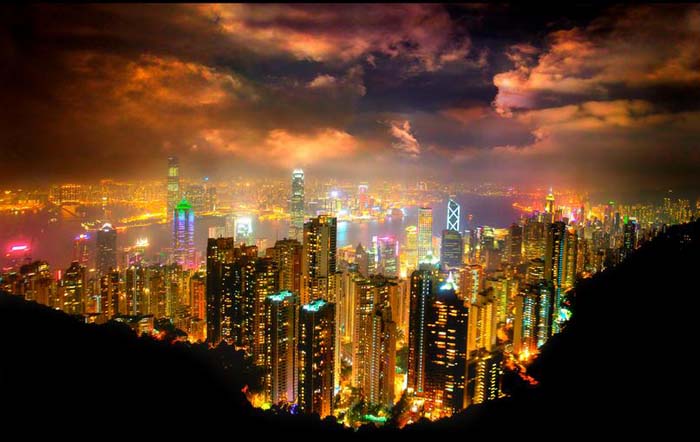 While Hong Kong certainly doesn’t boast the highest number of skyscrapers, what makes it so unique is how compact they are. When viewed from across the water, this amazing sight becomes even more dramatic, especially at night when the buildings are lit, emphasizing their colours and shapes. 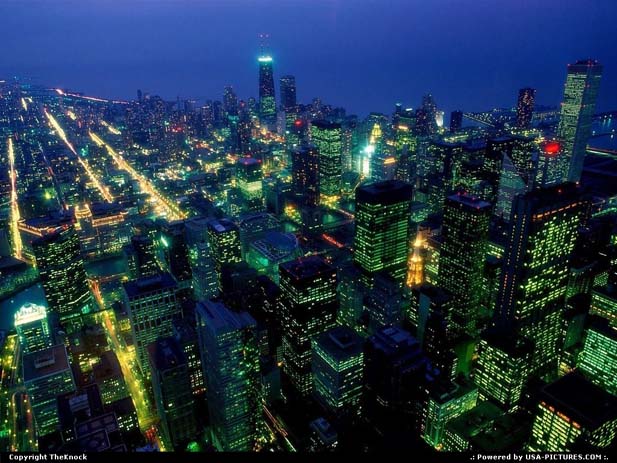 After the Great Chicago Fire of 1871, the people of Chicago were driven to rebuild the area, and now had plenty of space to do so. As a result, Chicago’s skyline is one of the world’s tallest, boasting three of America’s five tallest buildings. 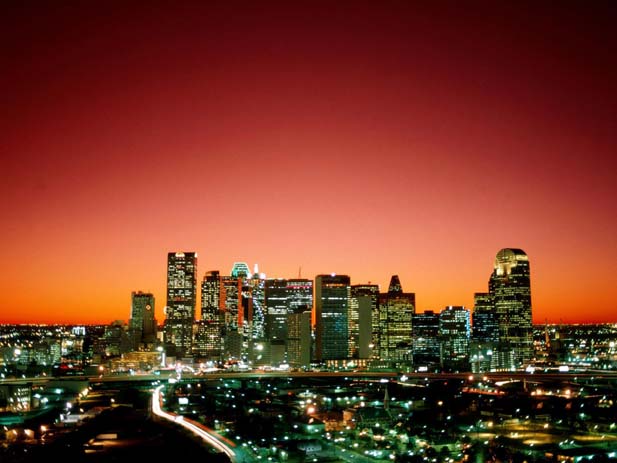 The ninth largest city in the United States, Dallas owes its growth to banking, electronics, fashion, and motion picture industries. The Dallas skyline is now abundant, with a number of new skyscrapers under construction or being planned. This skyline is known for its distinctive ball-shaped Reunion Observation Tower.

MORE: 10 OF THE BEST PLACES TO TRAVEL TO DURING WINTER 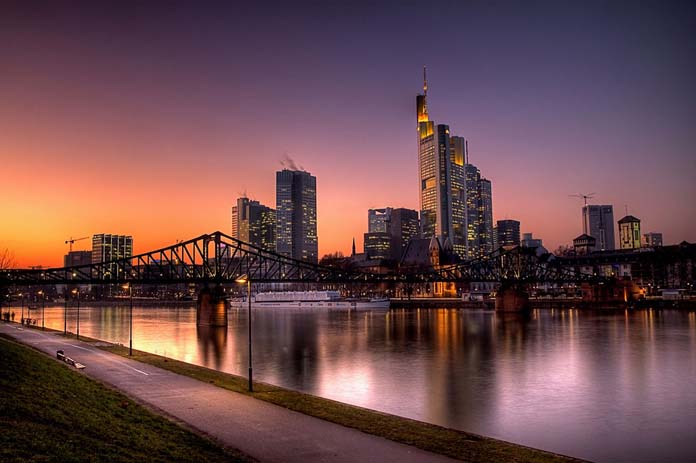 With five structures over 200 metres tall, Frankfurt is one of Europe’s most interesting skylines. Unlike many other European cities, Frankfurt combines a number of low-rise, high-density traditional European architecture with modern towers, giving the city an impressive combination of new and old. 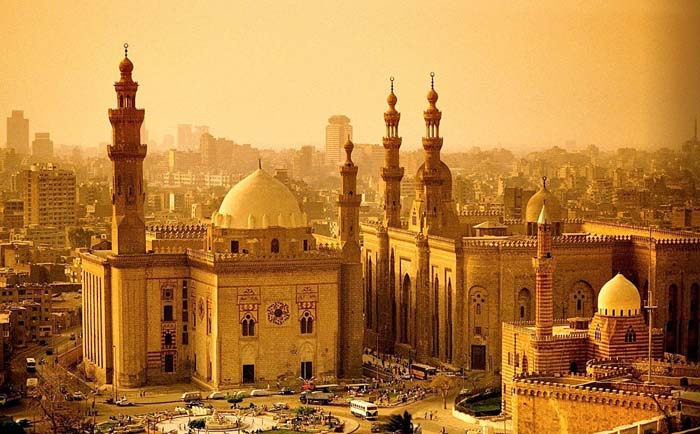 The skyline of Cairo is full of religious tradition and modern realities. The city was inhabited nearly 6,000 years ago and today has a population of over 11 million, making it the biggest settlement in the Middle East or Africa. Its skyline is an amazing sight and includes the Great Pyramid of Giza, which held the title of tallest man-made structure for over 3,800 years. Today a range of both modern and ancient structures can be seen throughout the city. 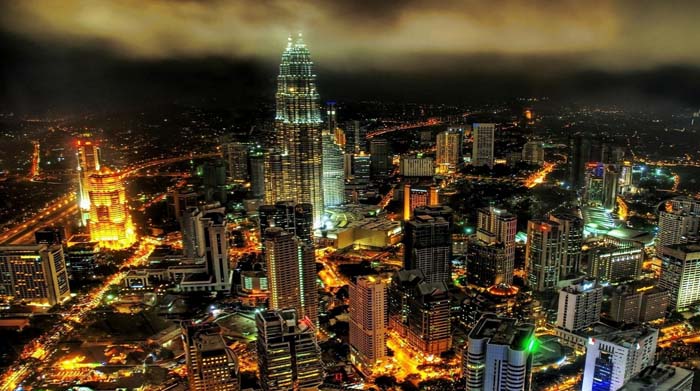 Kuala Lumpur is a beautiful mix of varying ethnicities, all captured in its bold city skyline featuring three of the 25 tallest buildings in the world. The East-inspired Petronas Towers are the tallest twin buildings, and are just some of the city’s many examples of bold statements. The skyline also includes the massive 420 metre Menara Kuala Lumpur Tower. The city has certainly drawn some international attention for its beautiful architecture. 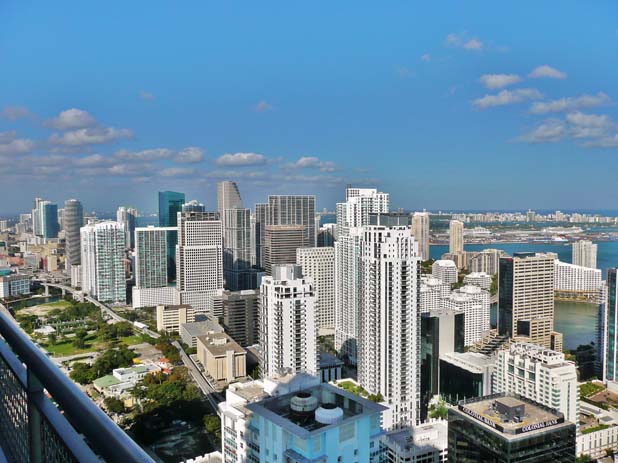 The modern gem that is Miami is a skyline that is expanding all the time. What makes this skyline so unique is its tropical feel, paired with neon lights, making it a beautiful scene attracting some of the top architects and designers from all over the world for a chance to add to this amazing cityscape.

The second largest city in Canada, and a UNESCO City of Design, Montreal boasts a number of impressive structures on a beautiful waterfront. The city has a height restriction which keeps the buildings from being as tall as Toronto’s, but the 18th and 19th century buildings compliment the modern towers wonderfully. 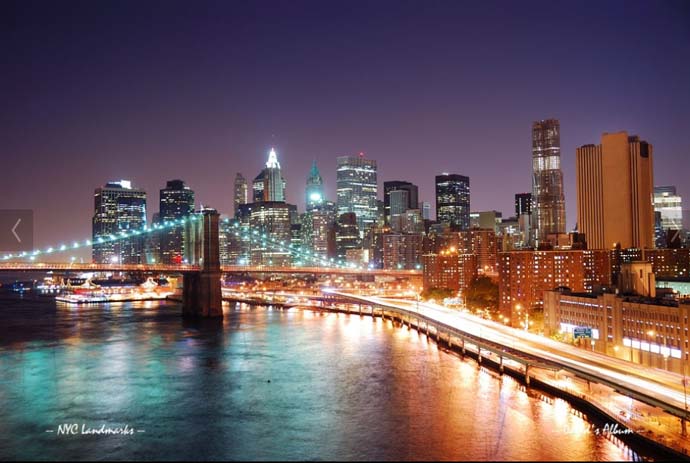 Often referred to as the centre of the modern world, New York City is among the most famous skylines in the world due to Hollywood’s obsession with the city. It is the densest skyline in the world with a range of diverse structures such as the Empire State Building, the Statue of Liberty, Rockefeller Centre, and many more. New York City boasts an incredible 47 buildings over 200 metres, more than any other city in the world. 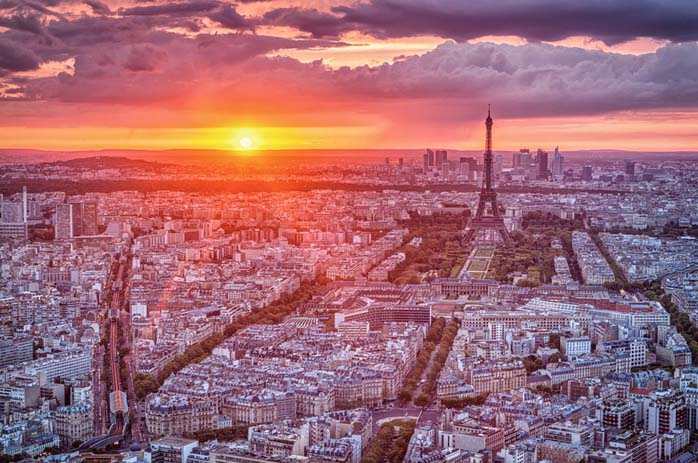 One of the most instantly recognizable symbols in the world, the Eiffel Tower gives the city of lights its distinctive skyline. Although Paris is mostly flat, the city holds many sights, including Notre Dame, the Arc de Triomphe, Le Louvre, Sacre Coeur, skyscrapers, and many beautiful bridges. It’s no wonder more than 6 million tourists each year visit the Eiffel Tower’s observation deck to take in the amazing views. 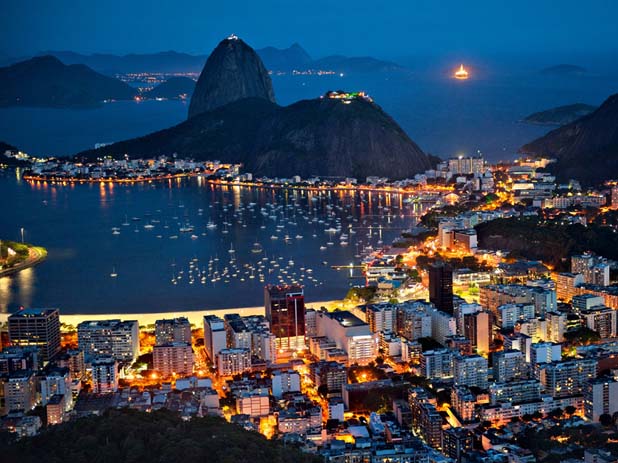 Nature plays a powerful role when it comes to this beautiful city. The cultural heart of South America, Rio de Janeiro can be viewed from Corcovado Mountain, home to the iconic structure, Christ the Redeemer. From here, Rio’s many gorgeous beaches can be seen, as well as the city’s amazing colour and character.

San Francisco is the United States’ second densest city, with much of the population packed into a compact peninsula. San Francisco has a number of new developments to improve its skyline, which is already home to the historic Transamerica Pyramid. However, what makes this city unique is the Golden Gate Bridge, which stretches almost two miles across the water, and stands at 700 feet above the water. 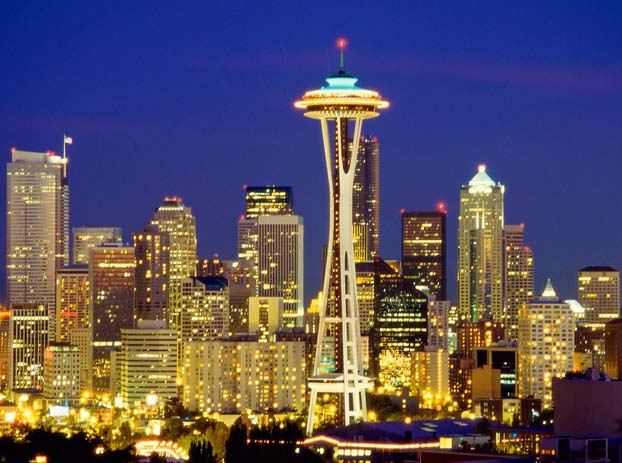 Also known as the Emerald City, Seattle is considered the commercial, cultural, and technological hub of the Northwest USA. Its skyline is nothing short of spectacular, with the famous Space Needle at 184 metres, a number of skyscrapers, and Mount Rainier looming on the horizon. A great deal of planning went into Seattle, and the result is this picturesque city surrounded by mountains and water. 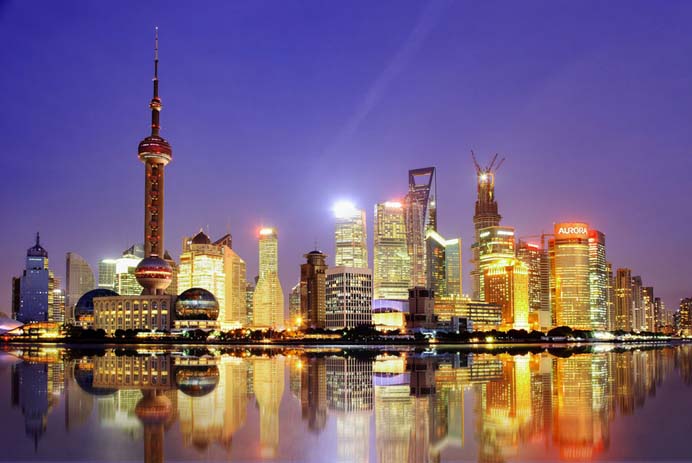 Shanghai is China’s biggest, most advanced city, and looks like something out of a sci-fi film. Its skyline boasts a massive 25 structures over 200 metres tall. The most well-known of these structures is the Oriental Pearl TV Tower at 468 metres. The city is a showcase of modern architecture, as well as one of the biggest economic powerhouses in the world. 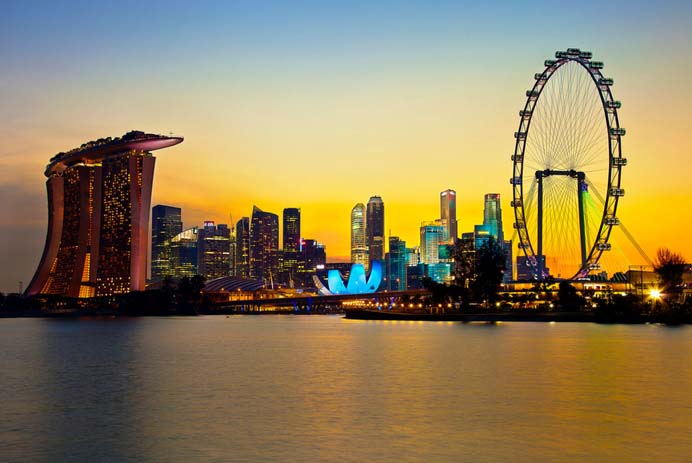 Singapore is one of the best planned and cleanliest cities in the world. Due to height restrictions, Singapore’s buildings are a consistent height, making their skyline extremely unique. Singapore has over 4,300 high-rises, with 49 that rise higher than 140 metres. The city also includes three buildings at exactly 280 metres, and five at just over 200 metres.

Sydney Harbour is often referred to as the most beautiful natural harbour in the world. The city itself has an extremely recognizable skyline due to the world famous Sydney Harbour Bridge, and the Sydney Opera House which serves as a national icon and important piece of 20th century architecture. Hundreds of skyscrapers are located in the central business district, with 8 over 200 metres tall. 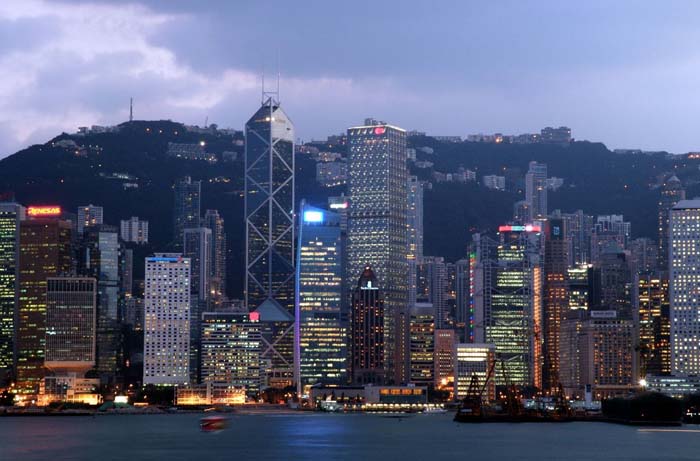 The most populated city in the world, the design and architecture of Tokyo reflects the chaotic city well. It has a number of skyscrapers, 15 of them at over 200 metres tall. Like some other cities, Tokyo has height restrictions and required red lights that flash atop all high-rise buildings at night. Combined with the neon lighting, unique architecture, and Mount Fuji just on the horizon, it gives Tokyo one of the best skylines in the world. 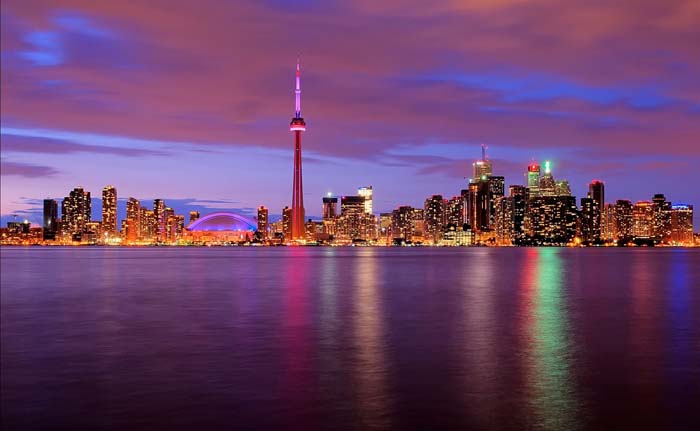 Boasting the world’s highest observation deck at 553 metres, the CN Tower gives Toronto an easily identifiable skyline. The city also includes 7 structures that stand at over 200 metres. Toronto has had a number of buildings booms, first beginning in the early 1920s. As a result, the city now has 2,506 high rise buildings. 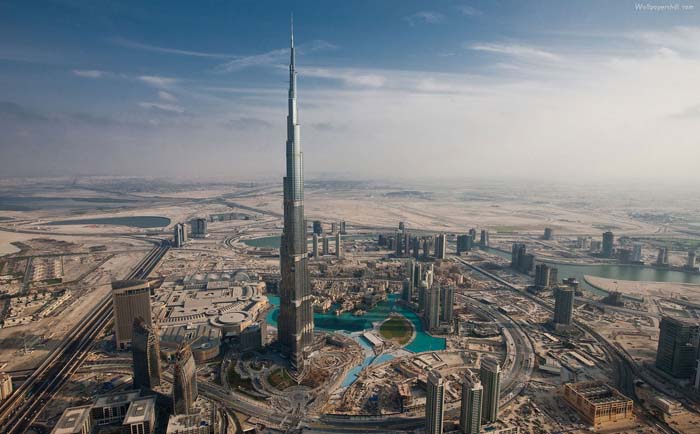 Dubai is a city that seemed to have come out of nowhere. Not only is it home to the tallest hotel and tallest residential buildings in the world, it now also holds the title of tallest building in the world. The Burj Khalifa can be seen for miles across the UAE desert. Although the city doesn’t boast the highest number of buildings, it surpasses the number for tallest buildings. This includes 63 buildings that stand taller than 200 metres, 125 taller than 150 metres, and 17 that exceed 300 metres. Seven of these structures were built after 1999, giving you an idea of just how new this city is.