An eerie feeling may be felt while visiting a castle, knowing that the walls hold secrets of many lifetimes. Rich with history and fabulous architecture, castle tours offer a chance to learn about a particular castle’s history – usually filled with blood, sweat, and tears. Here’s a list on where to see 9 of the best castles in Europe.

Where to see 9 of the best castles in Europe: Neuschwanstein Castle, Germany 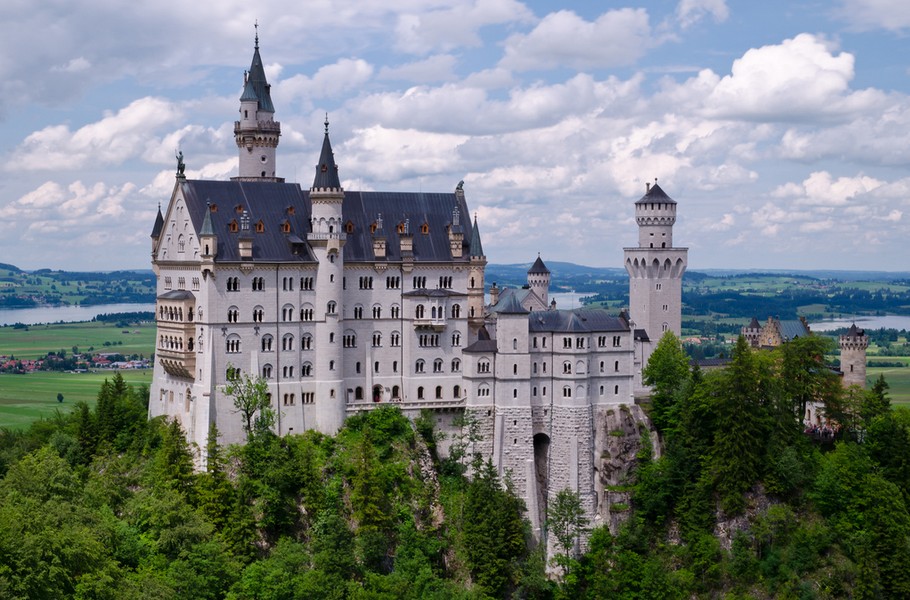 First on the list is Schloss Neuschwanstein Castle, a nineteenth-century Romanesque Revival palace perched on a rugged hill above the village of Hohenschwangau, Germany.

The palace was intended as a personal refuge for the reclusive King Ludwig II of Bavariaas, but it was opened to the paying public immediately after his death in 1886. Since then more than 61 million people have visited Neuschwanstein Castle, which is popular for its fairytale aesthetic, and lush forest surroundings.

Ludwig paid for the palace out of his personal fortune and through extensive borrowing, rather than using Bavarian public funds. The palace has appeared prominently in several movies and was the inspiration for Disneyland’s Sleeping Beauty Castle.

Neuschwanstein Castle is situated near Schwangau and Füssen in the Allgäu. The path to the castle starts in the village of Hohenschwangau, and this is also the last opportunity to park before walking to the castle.

On the grounds of the Windsor Castle. Photo by Felpie Pitta, flickr

The original castle was built in the 11th century after the Norman invasion by William the Conqueror. Since the time of Henry I, it has been used by succeeding monarchs and it is the longest-occupied palace in Europe. More than five hundred people live and work in Windsor Castle.

Windsor Castle survived the tumultuous period of the English Civil War, when it was used as a military headquarters for Parliamentary forces and a prison for Charles I. After a period of neglect during the 18th century, George III and George IV renovated and rebuilt Charles II’s palace at colossal expense, producing the current design of the State Apartments, full of Rococo, Gothic and Baroque furnishings.

Windsor Castle was used as a refuge for the royal family during the bombing campaigns of the Second World War and survived a fire in 1992. It is a popular tourist attraction, a venue for hosting state visits, and Elizabeth II’s preferred weekend home. 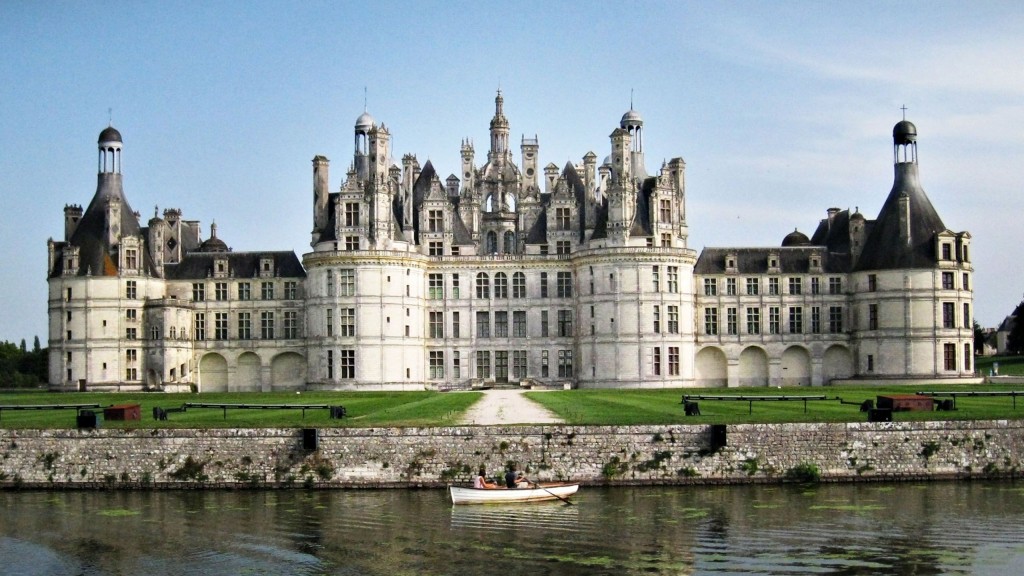 France’s Chambord Castle was home to King Louis XIV and was inspiration to painter Leonardo da Vinci and writer Moliere. The Disney film Beauty and the Beast used Château Chambord as inspiration for the Beast’s castle. Today, Chambord is a major tourist attraction because of its fairytale-like architecture and history.

The royal Château de Chambord at Chambord, Loir-et-Cher, France, is one of the most recognizable châteaux in the world because of its very distinct French Renaissance architecture, which blends traditional French medieval forms with classical Renaissance structures.

The building, which was never completed, was constructed by King François I. It has had a rather shaky construction, and was abandoned for a time in 1792 with the Revolutionary government ordering the sale of the castles furnishings, though in the 19th century some attempts were made at restoration. 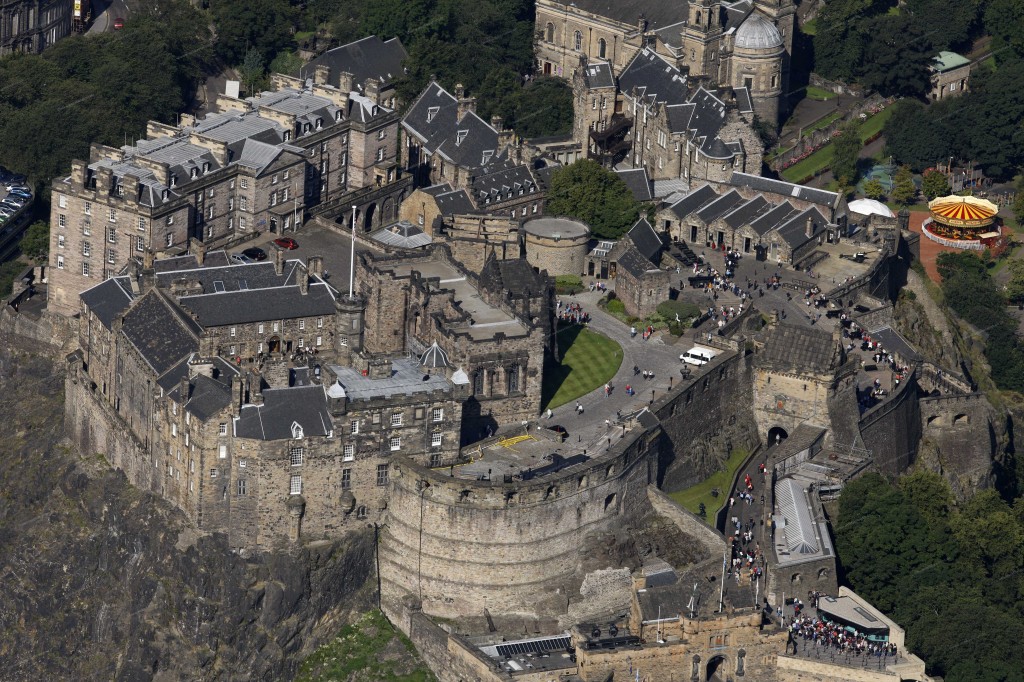 Edinburgh Castle is a historic fortress which dominates the skyline of the city of Edinburgh from its position on Castlehill. Through sieges, invasions, power struggles and murder, Edinburgh Castle in Scotland has stood the test of time. The castle is in the care of Historic Scotland and is Scotland’s most-visited paid tourist attraction.

It’s unclear exactly when the castle was first built, but there has been a royal castle on the rock since at least the reign of David I in the 12th century, and the site continued to be a royal residence until the Union of the Crowns in 1603. From the 15th century the castle’s residential role declined, and by the 17th century it was principally used as military barracks with a large garrison.

As one of the most important strongholds in the Kingdom of Scotland, Edinburgh Castle was involved in many historical conflicts from the Wars of Scottish Independence in the 14th century to the Jacobite Rising of 1745.

The British Army is still responsible for some parts of the castle, although its presence is now mostly ceremonial and administrative. Some of the castle buildings house regimental museums which makes it even more of a tourist attraction. 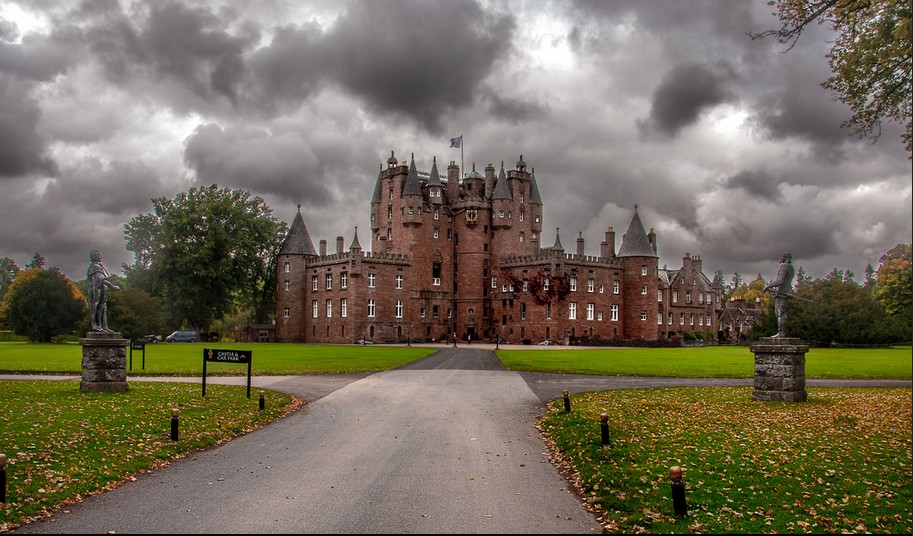 Glamis Castle has a reputation for being the most haunted castle in Scotland. It is the home of the Earl and Countess of Strathmore and Kinghorne, and is open to the public. Since 1987 an illustration of the castle has featured on the reverse side of ten pound notes issued by the Royal Bank of Scotland.

In 1034 AD King Malcolm II was murdered at Glamis, where there was a Royal Hunting Lodge. In William Shakespeare’s play Macbeth, the eponymous character resides at Glamis Castle, although the historical King Macbeth had no connection to the castle.

During the Commonwealth of England, Scotland and Ireland, soldiers were garrisoned at Glamis. In 1670 Patrick Lyon, 3rd Earl of Strathmore and Kinghorne, returned to the castle and found it uninhabitable. Restorations took place until 1689, including the creation of a major Baroque garden. The south-west wing was rebuilt after a fire in the early 19th century.

The most famous legend connected with the castle is of the Monster of Glamis, a hideously deformed child born to the family. In the story, the monster was kept in the castle all his life and his suite of rooms bricked up after his death. Another monster is supposed to have dwelt in Loch Calder near the castle.

There is an old story that guests staying at Glamis once hung towels from the windows of every room in a bid to find the bricked-up suite of the monster. When they looked at it from outside, several windows were apparently towel-less.

The legend of the monster may have been inspired by the true story of the Ogilvies. Somewhere in the 16-foot-thick walls is the famous room of skulls, where the Ogilvie family, who sought protection from their enemies the Lindsays, were walled up to die of starvation.

The late Sir David Bowes-Lyon, while taking a late stroll on the lawn after dinner, reportedly saw a girl gripping the bars of a castle window and staring distractedly into the night. He was about to speak to her when she abruptly disappeared, as if someone had torn her away from the window.

Glamis Castle is situated beside the village of Glamis in Angus, Scotland. Find out tour information and directions from a Scotland information centre. 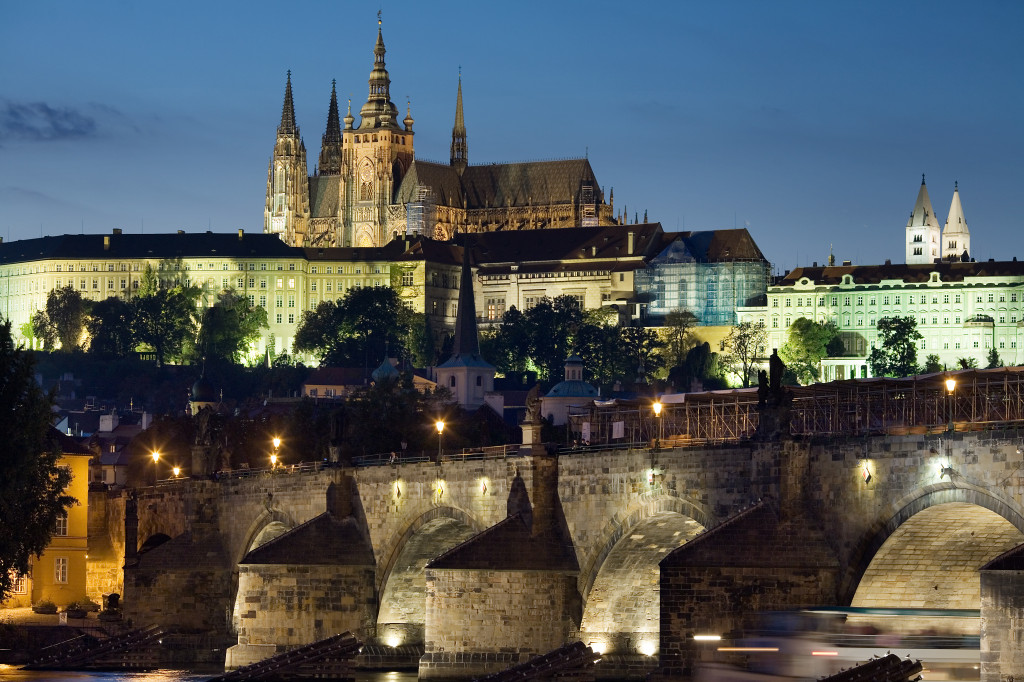 Prague Castle is the official residence and office of the President of the Czech Republic. Located in the Hradčany district of Prague and dating back to the ninth century, the castle has been a seat of power for kings of Bohemia, Holy Roman emperors, and presidents of Czechoslovakia. The Bohemian Crown Jewels are kept within a hidden room inside it.

The Prague Castle was most likely founded by Prince Bořivoj of the Premyslid Dynasty. According to the Guinness Book of World Records, the Prague Castle is the largest coherent castle complex in the world, with an area of almost 70,000 square metres. Since the Velvet Revolution, the Prague Castle has undergone significant and ongoing repairs and reconstructions.

Prague Castle is located in the Hrandcany district of Prague in Pražský hrad, 119 08 Praha 1, Czech Republic. 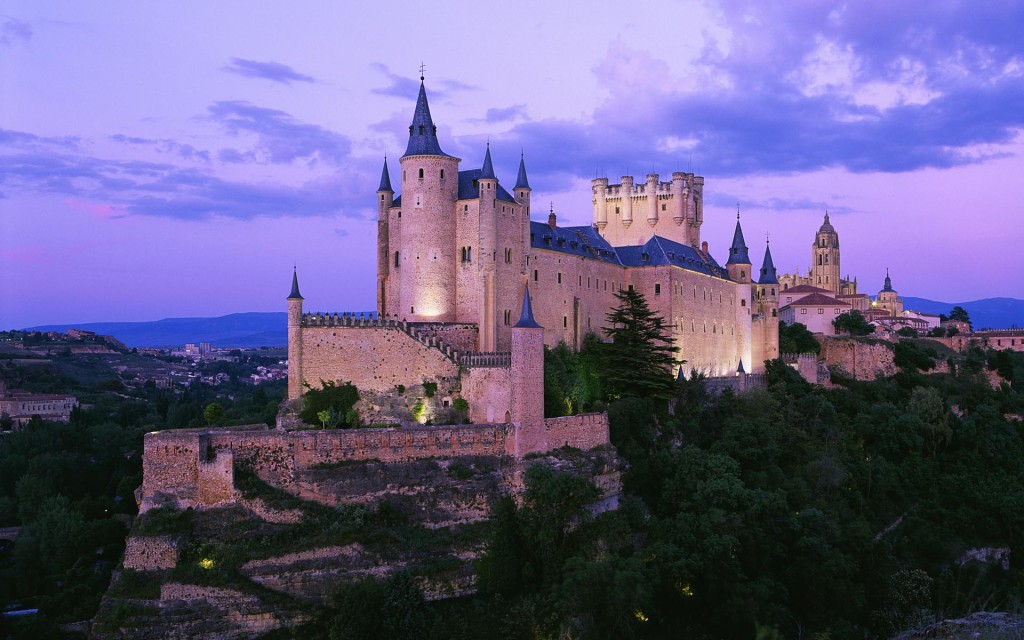 The Alcázar of Segovia is a stone fortification, located in the old city of Segovia, Spain. Rising out on a rocky crag above the confluence of the rivers Eresma and Clamores near the Guadarrama mountains, it is one of the most distinctive castle-palaces in Spain by virtue of its shape which is like the bow of a ship.

The Alcázar was originally built as a fortress but has served as a royal palace, a state prison, a Royal Artillery College and a military academy since then. The castle is one of the inspirations for Walt Disney’s Cinderella Castle.

In 1474, the Alcázar played a major role in the rise of Queen Isabella I of Castile. On the 12th December news of the King Henry IV’s death in Madrid reached Segovia and Isabella immediately took refuge within the walls of this Alcázar where she received the support of Andres Cabrera and Segovia’s council. She was crowned the next day as Queen of Castile and León.

The royal court eventually moved to Madrid and the Alcázar then served as a state prison for almost two centuries before King Charles III founded the Royal Artillery School in 1762. It served this function for almost a hundred years until March 6, 1862 where a fire badly damaged the roofs of the treasury, keep, armoury, sleeping quarters, and framework.

It was only in 1882 that the building was slowly restored to its original state. In 1896, King Alfonso XIII ordered the Alcázar to be handed over to the Ministry of War as a military college.

The ruins of Spis Castle in eastern Slovakia is one of the largest Medieval castles in central Europe. It is beautifully situated in the countryside and frequently used as a location for films, including Dragonheart and The Last Legion.

Spiš Castle was built in the 12th century on the site of an earlier castle. It was the political, administrative, economic and cultural centre of Szepes County of the Kingdom of Hungary. Before 1464, it was owned by the kings of Hungary, afterwards by the Zápolya
The last owners of the Spiš Castle, the Csáky family, abandoned the castle in the early 18th century because they considered it too uncomfortable to live in. The castle burned down in 1780 and has been in ruins ever since. The castle was partly reconstructed in the second half of the 20th century, and extensive archaeological research was carried out on the site.

Spis Castle is situated above the town of Spišské Podhradie and the village of Žehra, in the region known as Spiš. This is one of the biggest European castles by area (41 426 m²). 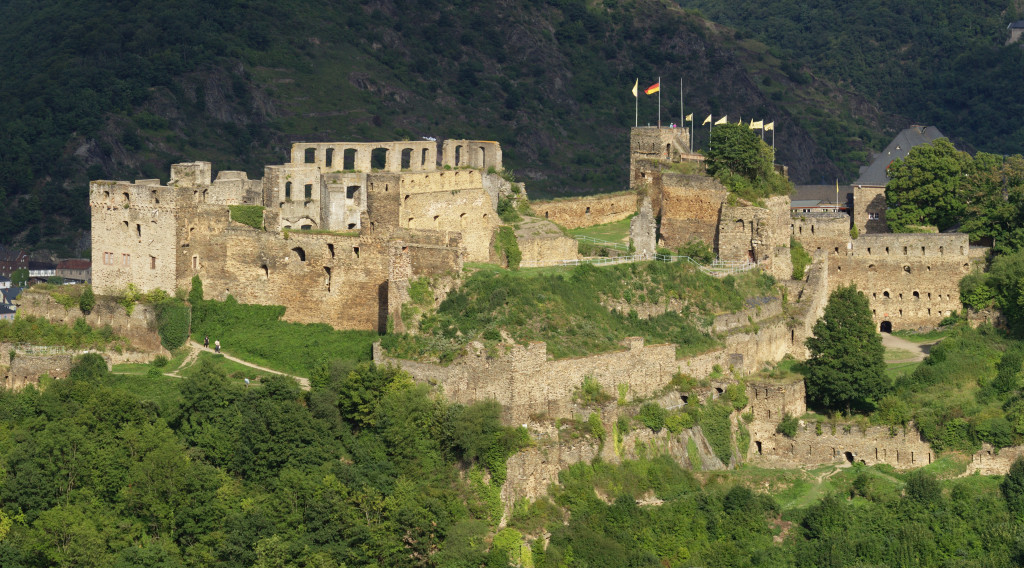 Rheinfels sits like a colossal giant  above St. Goar. This mightiest of Rhine castles rumbles with ghosts from its hard-fought past. Rheinfels was huge. Once the biggest castle on the Rhine, it spent the 19th century as a quarry. So today, while still mighty, it’s only a small fraction of its original size.

The massive Rheinfels was the only Rhineland castle to withstand Louis XIV’s assault during the 17th century. For centuries, the place was self-sufficient and ready for a siege. During peacetime, 300-600 people lived here, but during a siege there would be as many as 4,000.

To protect their castle, the Rheinfellas cleverly booby-trapped the land just outside their walls by building tunnels topped by thin slate roofs and packed with explosives. By detonating the explosives when under attack, they could kill hundreds of approaching invaders.

Visitors are welcome to wander through a set of tunnels. But be warned, they are 600 feet long assuming explorers make no wrong turns. It’s also dark, muddy, and claustrophobic, with confusing dead-ends, and travellers will have to crouch the whole way. A door blasted through the castle wall leads to the small prison, which is a door prisoners only dreamed of 400 years ago, as they came and went through a little square hole in the ceiling.