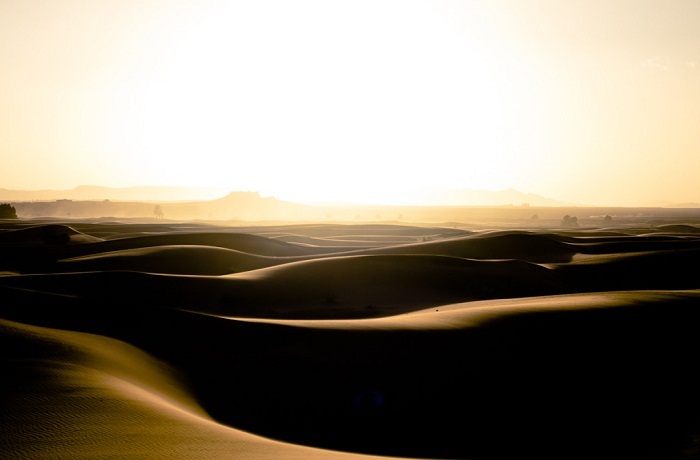 The Sahara Desert is a vast expanse of undulating sand dunes. Photo by hdeb89, Flickr

Vast, undulating mounds of sand baking in the hot desert sun make up the majority of the Sahara desert. These mounds extend into and beyond the horizon in every direction making an estimation of distance practically impossible. Crossing the Sahara by camel is incredibly dangerous. Wind sweeps the top-layers of sand into never ending ripples that allow dark shadows to dance among them. 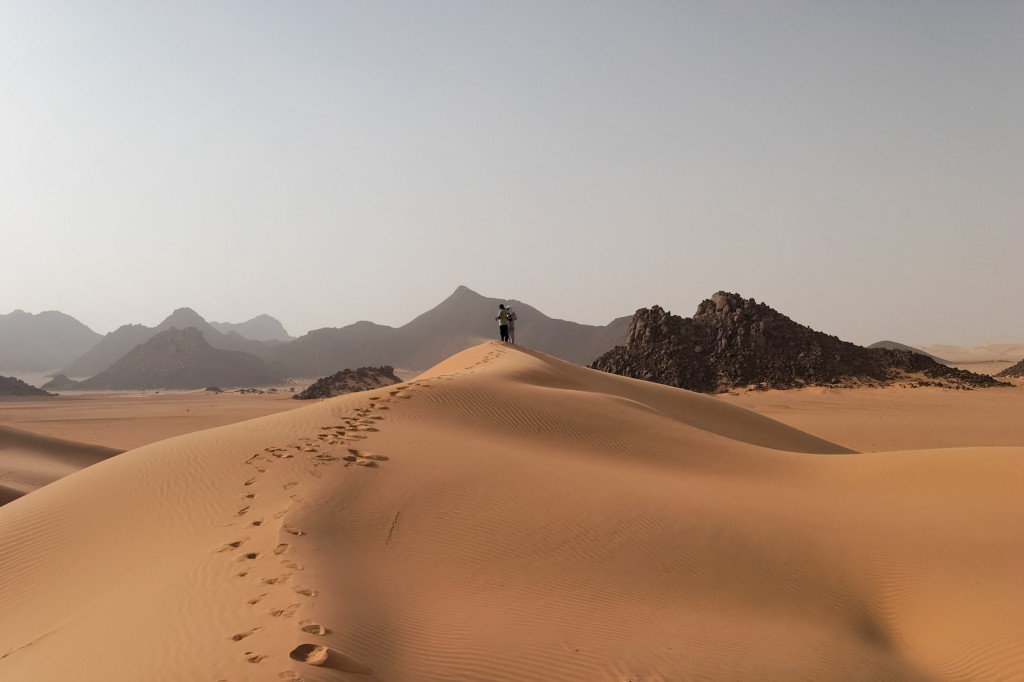 The Tenere Desert is one of the most beautiful areas of Sahara. Photo by Matthew Paulson, Flickr

This is an ocean of sand as dynamic as it is immense and there is a very good reason it acted as a barrier to human movement for so long. It is also the reason that humans, even today, yearn to cross it. It is difficult, it is dangerous and it is daring and that is exactly what makes it such an adventure. Crossing the Sahara by 4-wheel drive is a brilliant escapade in itself, but to travel this most difficult landscape on camelback is an authentic experience that will last a lifetime. 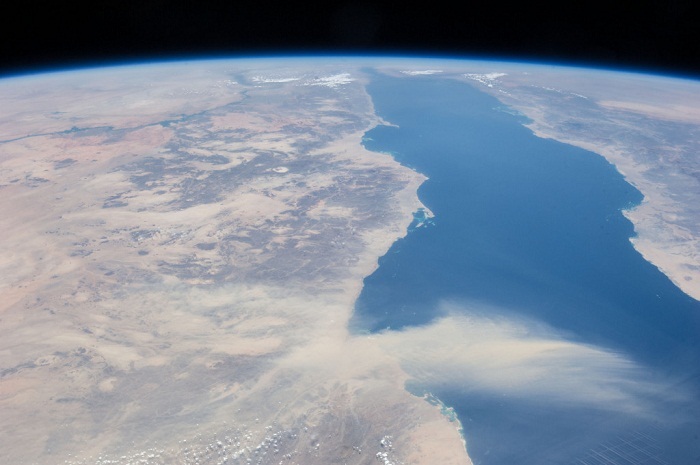 The Sahara is so large it can be seen from space! Photo from NASA’s Marshall Space Flight Center

Crossing the Sahara by camel: Things to remember 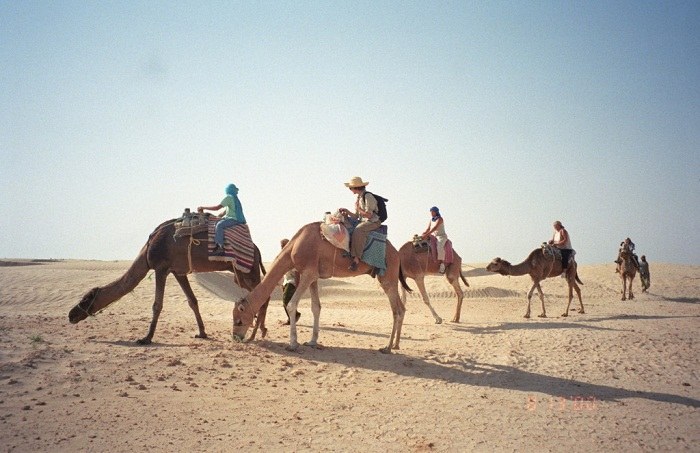 Camel trips can be difficult and demanding, but a rewarding experience. Photo by upyernoz, Flickr

To travel for any meaningful length of time in the Sahara, a major shift in perception is required because suddenly there is a tangible element of danger. One slip-up and you might never be seen again, so careful preparation and groundwork is key, as is giving up the self-reliance that many travellers grow fond of. Out here, the expertise of others is crucial to your survival and it is the most fundamental thing for potential visitors to remember. The second is that travelling the Sahara is not easy. The size alone, the Sahara is the biggest desert in the world outside of the Arctic and Antarctica, means that any trip is likely to take days or even weeks. 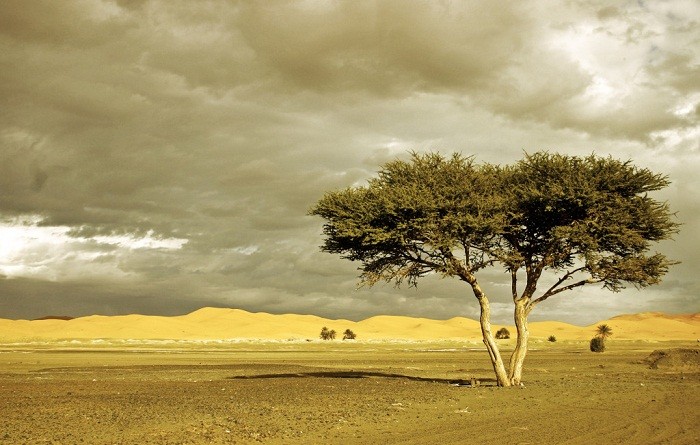 Any supplies you bring must be carried on your back including food, water and camping equipment and that limits what can be taken. Above anything else though, you will be travelling through a desert and thus exposed to harsh sun, dust clouds and extremely cold nights. If you are looking for a luxury holiday, or even a relaxing one, the Sahara by camel shouldn’t be top of the list. What it does offer is adventure, nights under the African stars and an unforgettable experience. 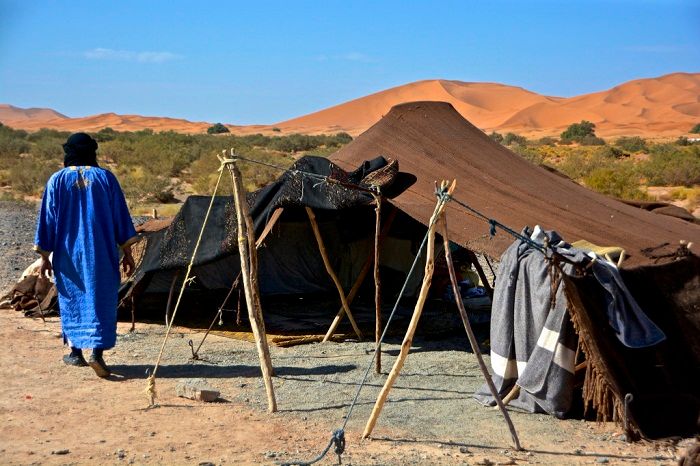 Berber people have been wandering the desert for hundreds of years. Photo by Antonio Cinotti, Flickr

This is the first and most crucial question to ask when planning a trip by camelback into the Sahara. Some intrepid souls (John Hare did the trip twice) have gone so far as to travel from Mauritania on the western coast, through Mali, Niger and Libya, to finish on the eastern coast in Egypt. This is rare and the logistics of such an endeavor are multidimensional. Various entry and exit permits are required for entry into these nations and they can be dangerous to travel in. You would need an expert guide, professional solar-powered GPS equipment, food and water, professional first aid equipment, good-quality camping gear and perhaps a satellite phone. 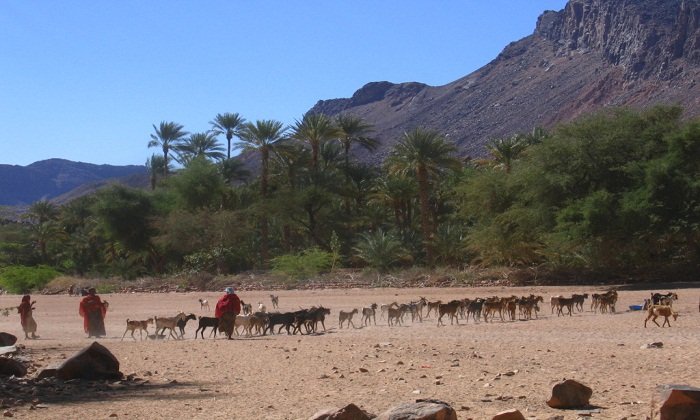 One camel simply can’t take you the whole distance, back-up camels would also be required and possibly pit-stops to buy more in Saharan cities. Not to mention that on camel this type of trip would take months. Travelling by camelback from one side of Africa to the other might sound romantic in theory, but a few weeks of heat and saddle sores will probably dampen your enthusiasm. Most travellers choose to take shorter trips, and there are a few locations that offer far more comfortable, if less daring, excursions into the Sahara. 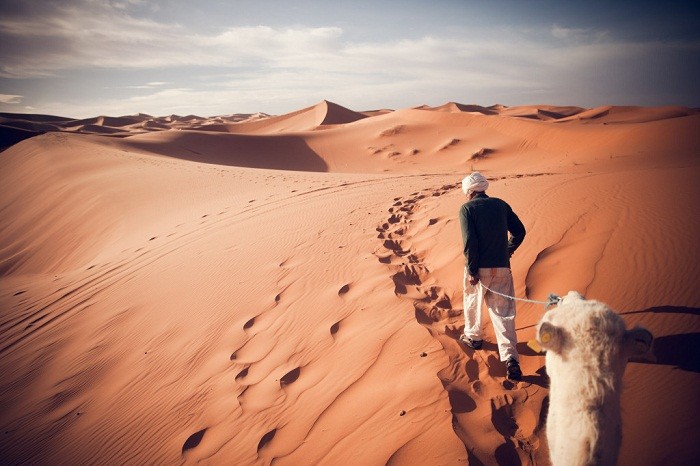 A guide leads a camel through Erg Chebbi nearby Merzoug. Photo by Chris Ford, Flickr

By far the most common form of travel in the Saharan Desert takes place in southern Morocco, where there are a number of tourist operators offering both short and long trips into the desert. The small towns of M’Hamid, Arfoud and Merzouga are well known as desert oases that act as a gateway to the fabled golden dunes that lay nearby. The tallest (some reaching 50m high) and most impressive dunes in Morocco can be found at Erg Chebbi near Merzouga, with 3-5 day camel safaris relatively easy to organise in town. Another fantastic spot for dune watching is Erg Chicaga, which is harder to get to but has a more dynamic landscape. 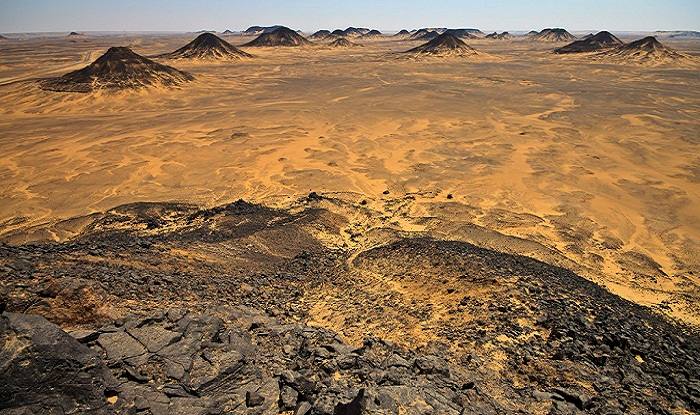 A view of the Black Desert region of the Egyptian Sahara. Photo by Peng Jun Jason, Flickr

Egypt is another option for Saharan Desert safaris and tour operators here generally offer long trips up to two weeks on camelback. The southern towns of Al-Kharga, Dakhla and Farafra are best for 4-wheel drive tours but most of the camel safaris depart from Cairo. One of the more popular tours here involves a 12-day round trip departing Cairo, which combines several hours on camels per day with various local attractions and visits to secluded desert oases. Camp is set up each night in open desert with the sky bright with stars. One of the most interesting aspects on these tours is the transition from beige to black sand as you enter the Black Desert area of the Sahara nearby the Bahariya oasis.

Niger (not for the faint-hearted) 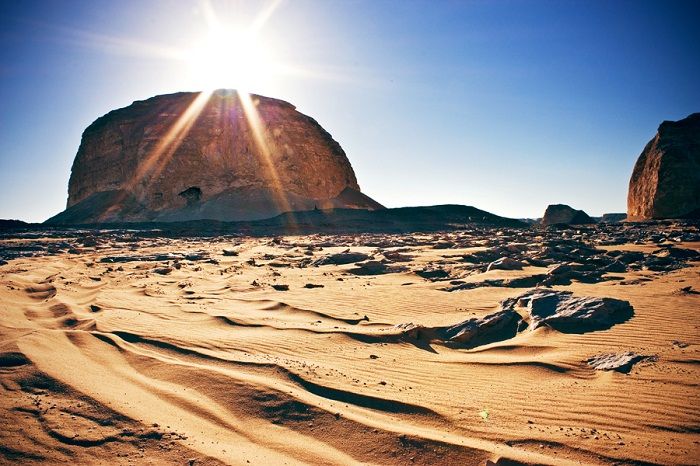 The white sand and rock formations bring many visitors to Egypt. Photo by Alfie lanni, Flickr

Both Morocco and Egypt offer safer, shorter trips through the desert that are highly popular with visiting tourists. For those seeking something with more adventure and isolation though, Niger has some of the best desert treks in the Sahara. Tourism isn’t as highly developed in Niger and political tensions in the region mean it is far harder and more dangerous to visit than Morocco, Egypt and Tunisia. Potential visitors should think carefully before planning a trip here, and only commit to it if they have experience with similar places and trips in Africa. 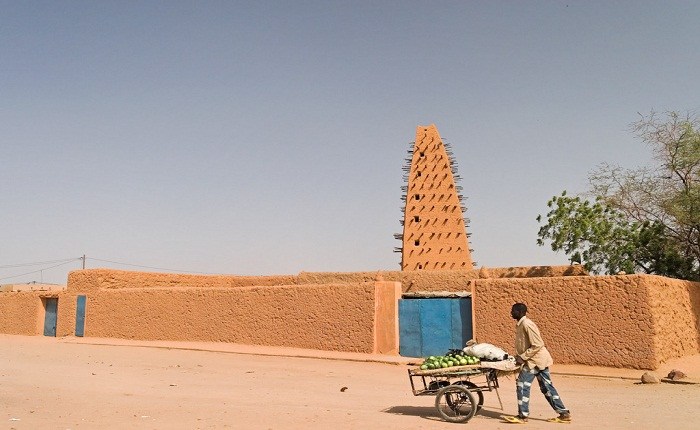 A man pushes a wheelbarrow of watermelong past Agadez Mosque. Photo by Matthew Paulson, Flickr

Those that think the risk is worth the reward will be delighted by a vibrant local people and some of the most beautiful parts of the Saharan Desert. The trip from Agadez to Bilma through the Ténéré is a historic pilgrimage in Niger with the Erg du Bilma a simply dazzling desert sea. The journey takes up to two weeks and a lack of tourism operations means that you will have to buy a camel and hire a guide yourself in Agadez. This is as authentic a desert experience as you can get though, and a side-trip to the more habitable Aïr Mountains region might give you a totally new perception of the Sahara. The climate here supports a wide variety of life as well as numerous farming communities.