Most trips in Greece start in Athens

When making your way to the Greek Islands, it’s more than likely that you will need to go via Athens. Don’t make the mistake that many travellers do of disregarding this city due to its lack of beaches. Athens is full of history and is often considered to be the birthplace of the modern world. It’s well worth doing a walking tour around Athens where you can learn about the beginnings of modern democracy and why marathons are 21 kilometres long to this day. Of course, a visit to Athens wouldn’t be complete without a trip to the Parthenon, the temple on the Athenian Acropolis.

Walk up the Areopagus hill opposite the Acropolis for a great view of the famous landmark itself as well as of the vast city of Athens. From here you can also see the Agora, the ancient town centre, and a beautiful view of Mount Lycabettus with the lonely St George’s chapel atop it.

Travels in the Greek Islands: Mykonos 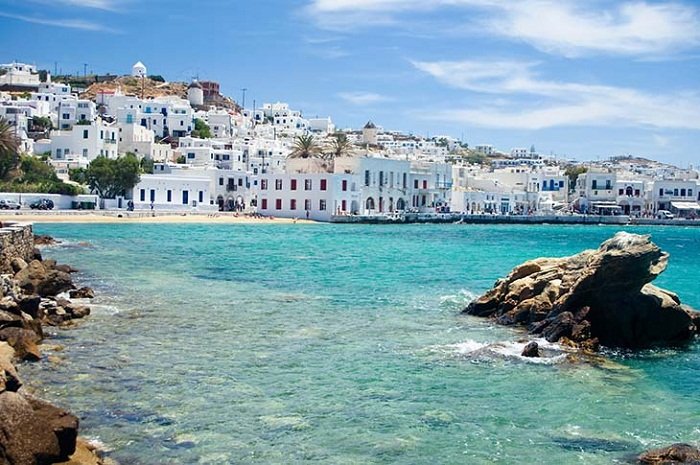 Mykonos, a Greek Island situated in the Mediterranean Sea. Photo by travelhub.com.au

Mykonos is best known for its amazing clubs complete with star-studded DJs and artists. It’s worth checking out who is playing before you go as you might be able to time your visit to coincide with your favourite artist. Usually, you can purchase discounted tickets for club nights throughout the day by visiting the main part of town and looking out for promoters (though they’ll probably find you first!). However, if it’s a huge artist you should buy your ticket in advance so as not to miss out.

If late nights aren’t your thing but you still want to be a part of the famous party scene in Mykonos, check out the Tropicana beach party which starts during the day. Invariably, people end up staying on past dark still in their swim suits, dancing on tables and on the bar to loud music and the shouting of the DJ.

In the day time, get lost (quite literally) in the winding, cobbled streets of the town. There is some great shopping and food to be discovered.

To save money for the expensive drinks in the clubs, choose an affordable but beautiful place to stay. The Paraga Beach Hostel costs around $75 USD a night (which in most other towns would be expensive for the very basic rooms), but if you can handle sleeping without luxury, you are compensated with an amazing view from the pool and a beach just a few steps away, complete with some of the clearest blue ocean in the world. 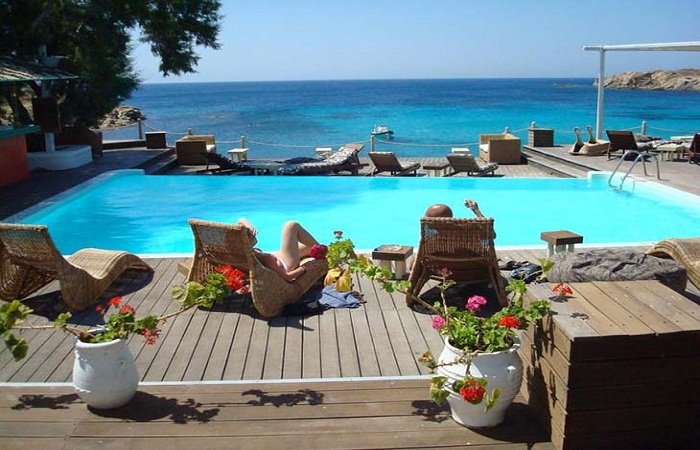 The view from the pool at Paraga Beach Hostel. Photo by hwstatic.com

Party till the break of dawn in Ios

Ios is full of party animals too, but it’s much more affordable and the whole island has a relaxed vibe.
On the beach you can try all kinds of water sports, including diving, parasailing, snorkelling and riding the banana. Then, when it’s time to kick the party off you can head to Far Out Hostel directly opposite the beach for a pool party. Head back up the hill to the main part of town for all kinds of bars in the winding alleyways which each offer something different to lure you in. 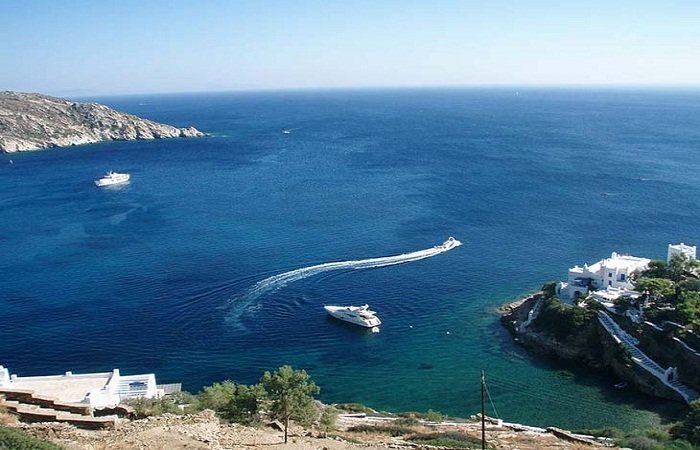 You’ll see signs for cheap cocktails outside many of the bars, and Circus Circus offers a live band which is great for a sing-along. There’s even a bar called ‘Slammer’ where you can order a drink of the same name. Not only does it knock you about with its strong alcohol content, but you literally get knocked about by the bartenders – they give you a helmet and proceed to hit you with anything they can find, from their hand, to a hammer, to a skateboard. Not for the fainthearted! 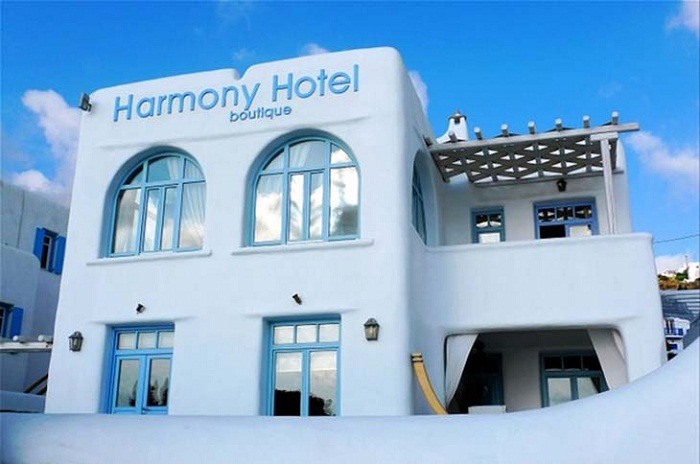 Head to Harmony restaurant, located up a small hill at the end of the beach which makes it the perfect spot for a view of the ocean. If you get there around 3pm, you can have a relaxing (and delicious) Mexican meal and keep your table for when the live band starts to play and the crowds start to flow in. The fun atmosphere will have you wanting to stay well into the evening.

Santorini is undoubtedly the most romantic of the islands. The picture-perfect sunset at Oia is its most famous of attractions. Take a picnic with you and get there early to bag a great spot to watch the sun go down. 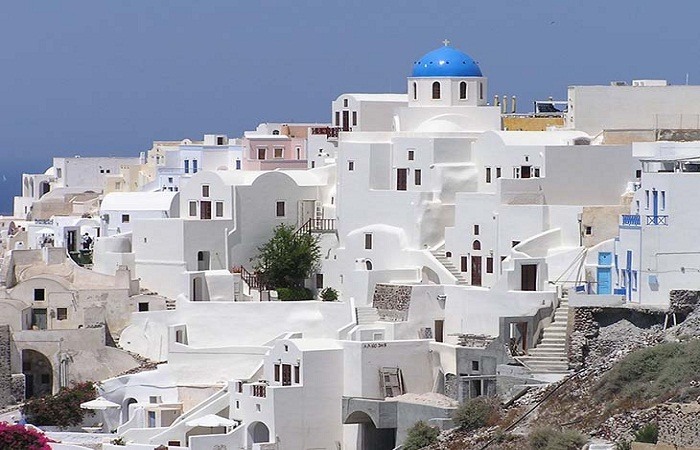 The beautiful whitewashed walls of Santorini. Photo by Wikipedia.org

The view from both angles is stunning – the wide expanse of ocean in front of you, and behind you, flat white walls and blue roofs cascade down to the water. As the crowds file in, you’ll see donkeys clip-clopping down the stairs, sometimes carrying passengers. Then comes the sunset. Looking out across the vast ocean, the red sun and it’s reflection on the water slowly shrinks into darkness, while the shadows of boats twinkle in it’s last light.

When the sun finally dips past the horizon line, applause usually bursts out from the crowd – and rightly so!

Hire mopeds to get you around the island – there’s no better feeling than flying along the cliff-side roads with the ocean at your side and the breeze flowing through your hair. You can take your mopeds to visit the black beach, the red beach, and the white beach, all of which have been coloured by the island’s volcano. 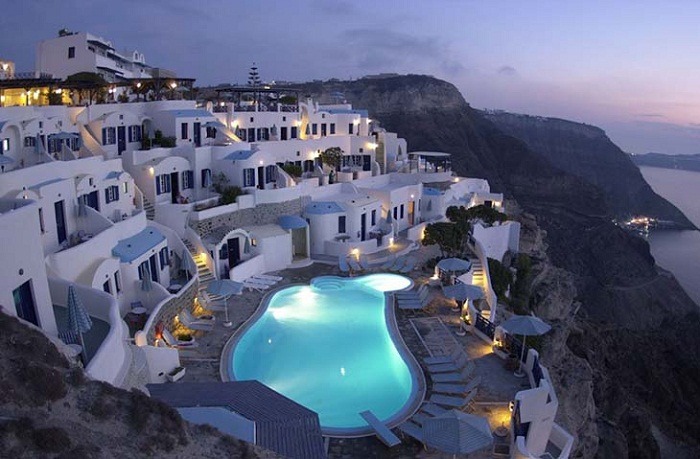 The Volcano View Hotel in Santorini. Photo by volcanoview.net

Hot tip: Schedule your trip for when the fireworks are on at the volcano

Every year on the Sunday closest to the 15th of August the Municipality of Santorini hosts an impressive fireworks display on the volcanic island of Nea. Go to Fira (also known as Thira), the main town of Santorini, where you can find a spot along the cliff to watch the fireworks. 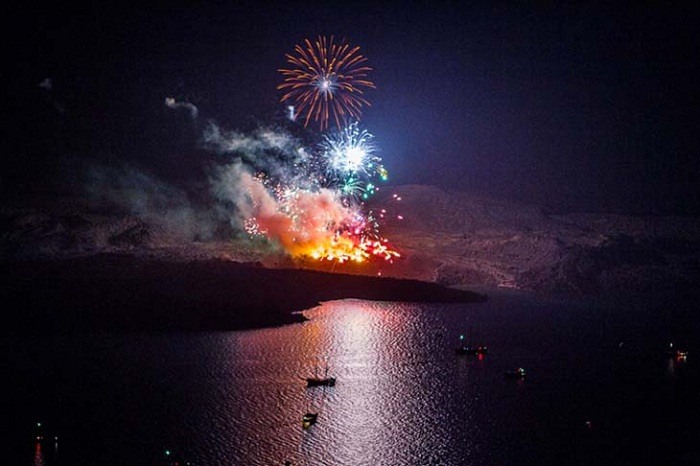 The display starts off small with little flares being let off from the volcano – but then lines of blazing red begin to form cracks on the sides of the volcano, culminating in a spout of red coming out the top. It looks so much like lava that you’ll be worrying that the fireworks have caused an eruption. But the show goes on, with more fireworks bursting in the sky above the volcano in a spectacular finale.