Spending a night under the stars at Wadi Rum, Jordan

Virtually untouched by humanity, Wadi Rum desert is a place of tranquil isolation and simplicity. Sleep in the desert, bedouin-style, surrounded by thousands of twinkling stars untainted by light pollution. Listen carefully to hear the vast desert whisper and the campfire crackle while you break away from society to sleep under the stars in Wadi Rum. 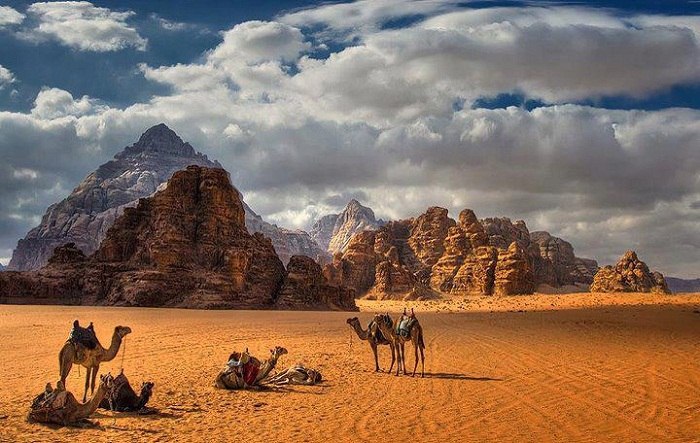 Wadi Rum, also known as The Valley of the Moon, is a valley cut into the sandstone and granite rock in southern Jordan, 60km to the east of Aqaba. It has been inhabited by many human cultures since prehistoric times, such as the Nabateans, who left their mark in the form of rock paintings, graffiti, and temples. Khaz’ali Canyon is one popular spot to visit, with petroglyphs etched into the cave walls depicting humans and antelopes dating back to the Thamudic times.
The Bedouin have climbed in the Sandstone mountains of Wadi Rum for many generations, and many of their ‘Bedouin Roads’ have been rediscovered and documented by modern climbers. The highest elevation in Jordan is Mount Um Dami, which is located 30 kilometers to the south of Wadi Rum village. Towering at almost 2000 metres high, on a clear day you can see the Red Sea and the Saudi border from the summit. 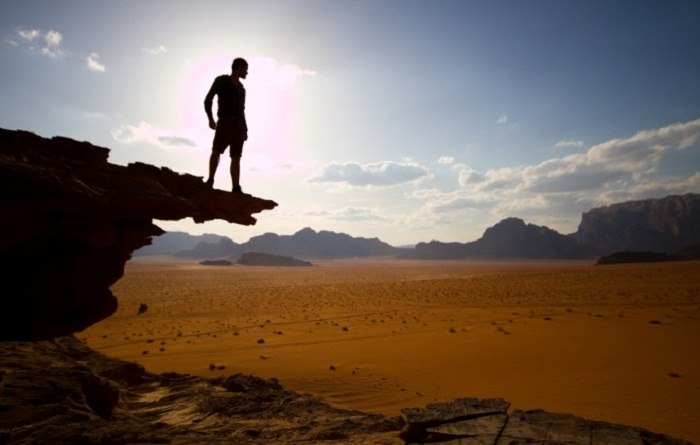 Become an explorer in Wadi Rum. Photo by roughguides.com

A maze of rigid rockscapes rise up from the desert floor to heights of 1,750m, making it perfect for sight seeing and a challenging endeavor for mountaineers. Hikers can explore the canyons and water holes, discover rock drawings over 40 centuries old, and enjoy the isolated surroundings. Other popular activities in Wadi Rum include camping under the stars, riding Arab horses, and trekking. 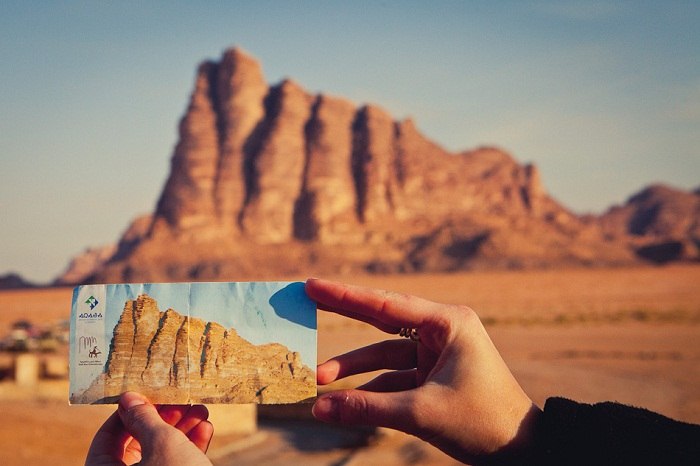 The village of Wadi Rum itself consists of several hundred Bedouin inhabitants with their goat-hair tents, concrete houses and four wheel vehicles. There is one school for boys and one for girls, a few shops, and the headquarters of the Desert Patrol. While most of the inhabitants of Wadi Rum are no longer nomadic, there are still some families that live in the traditional way – moving from grazing area to grazing area with their herds of sheep, goats, and camels. You will certainly see some of these nomads’ tents on your trip through Wadi Rum. 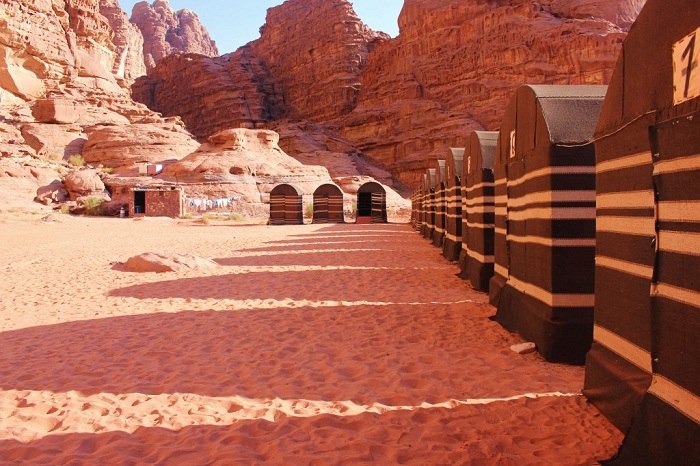 With around 90% of Jordan covered by desert, summers are scorching hot, but travellers must beware of night time, as Wadi Rum’s sands plummet to 4°C in winter. The heat is most comfortable between June and September, while nights can drop below freezing from December to February.

Sleep under the stars of Wadi Rum 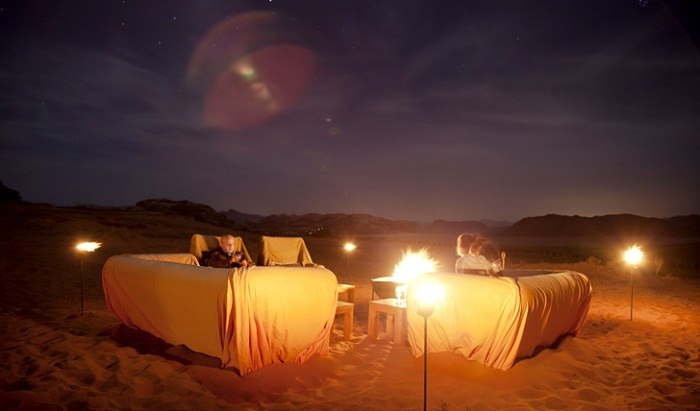 Enjoy the relaxed atmosphere is the isolated desert. Photo by blacktomato.com

There are several options for exploring Wadi Rum, and visitors should head for the Visitors’ Centre where they can gather information about the tour operators that would best suit their needs. The Bivouac camping under the stars tour is included as part of a hiking tour. Spend the night around the fire with your guide who prepares your dinner for you. Mattresses and blankets are provided, as well as bottled drinking water. Sleep in the open under the stars and enjoy the tranquil nature of the Wadi Rum desert Bedouin-style. 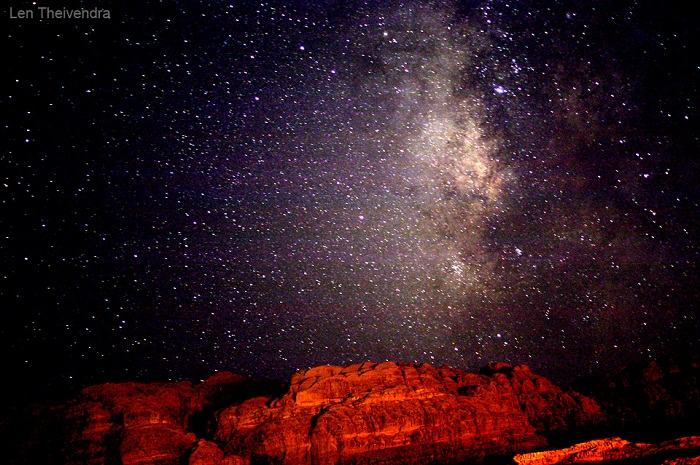 The camping locations are selected according to the time of year, the weather, and the hiking tour type chosen. For this experience, expect to pay around $100 USD per night, which includes dinner, breakfast, and your own private guide. Take a friend along and pay $50 USD per person per night. With a group of three to five people pay $42 USD per person, or $35 USD per night gor groups of six or more. For more information about this tour visit: http://wadirumjeeptours.com/bivouac-camping-under-the-stars-wadi-rum/ 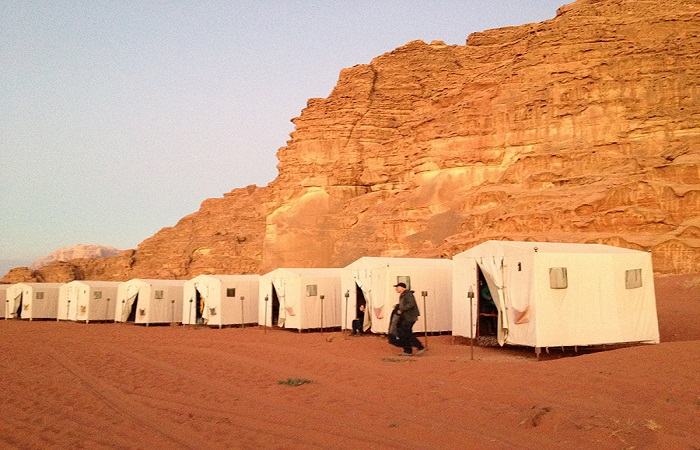 The Bedouin Lifestyle tour allows travellers to choose whether they would like to do a jeep, hiking, or camel tour to reach their star sleeping destination in the Wadi Rum desert. Similar to the Bivouac tour, you have a private guide who cooks for you and helps you to get the most from your sleeping under the stars experience. Visit http://www.bedouinlifestyle.com/en/subprograme.aspx?cat=9 to find out more.

A few tips for your trip: 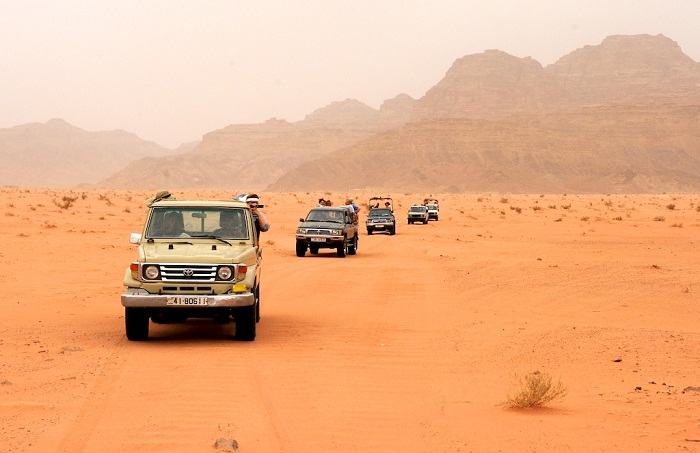 Take a Jeep, camel, or hiking tour to reach your star sleeping destination. Photo by morristhurston.com

When visiting Wadi Rum, remember to bring something warm to wear at night as temperatures can vary from a daytime average of 32°C down to 4°C at night.
Always remember to ask permission before taking photographs of the local Bedouin people. 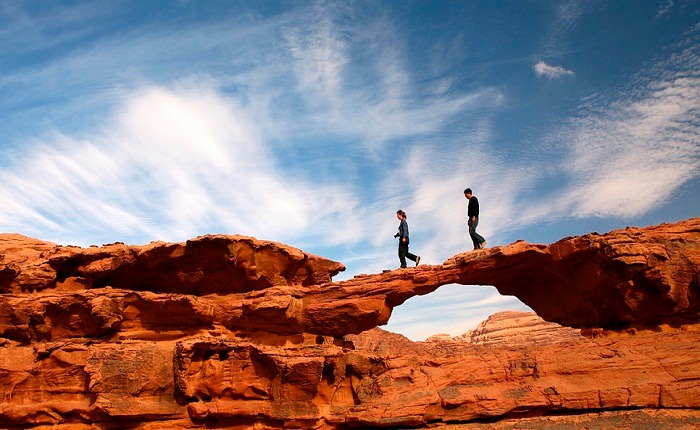 Dress modestly when visiting an area inhabited by the Bedouins. Their culture is very different to those of more liberal western cultures and skimpy shorts and tops will be considered disrespectful.