Staying at the Northern Lights Hotel in Finland

Staying at the Northern Lights Hotel in Finland is an experience like no other. The Northern Lights, otherwise known as Aurora Borealis are explained as the collisions between gas particles in the Earth’s atmosphere. These collisions then create spectacular displays of coloured light beams across the sky, particularly in high latitude regions of the Earth. Colours are more often than most hues of green and blue and make the night sky look astonishing – normally during or after a storm. No wonder there’s a market for people willing to trek thousands of miles to the most northern parts of the world to see these incredible light shows.

What to expect at the Hotel 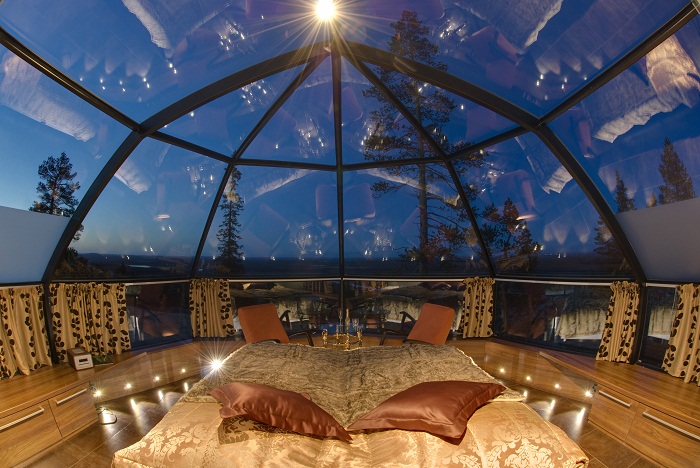 Arguably one of the coolest hotels in the world, the Igloo Hotel Village in Finland is one of the best places to get up close to the Northern Lights. Keep in mind that this is a lodge – the setting is for travellers who want to witness the Northern Lights, not spend nights in complete luxury. Your room is an igloo; literally. You sleep and stay in an igloo shaped room made out of glass for optimal viewing of the sky (and hopefully the lights). 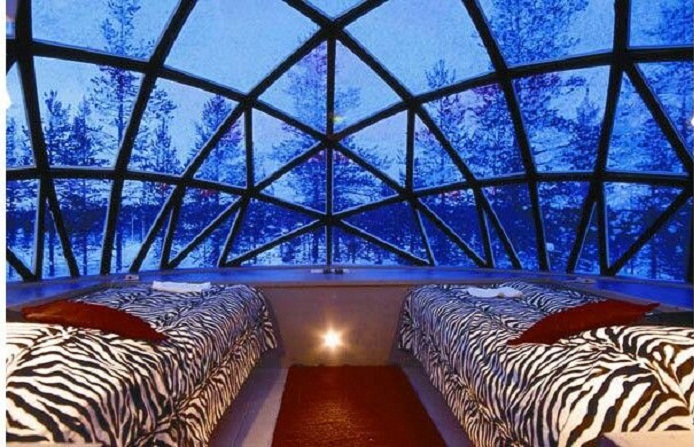 Inside one of the igloos. Photo by hiroko y Pinterest

If the Igloos aren’t your thing, you can choose to stay in the larger wooden cabins. If you’re feeling really adventurous, you can choose to stay in an actual snow igloo but be prepared to spend your night in roughly negative two degrees. Outside it’s significantly lower than that, with the temperature dipping into the negative forties. Just remember, it’s all part of the experience (but not everybody’s cup of tea). 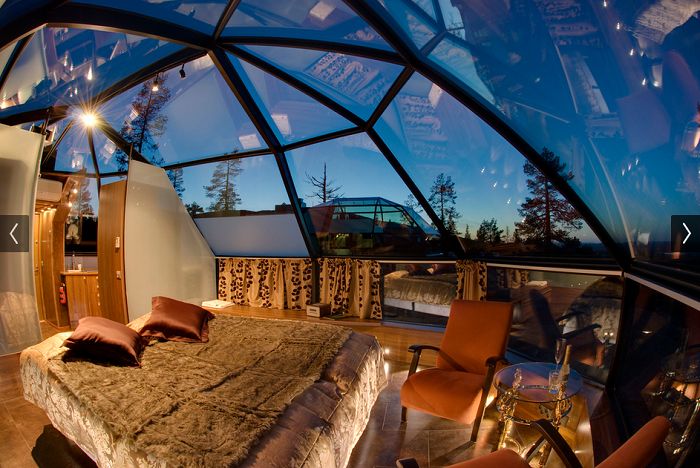 View from inside the igloo Photo by Quantum glass From Flickr

Many guests suggest spending the majority of your stay in a wooden cabin for comfort and size, and then spending one or two nights in a glass igloo for experience. Keep in mind that there is no guarantee that you will see the Northern Lights, but being in this hotel in the isolated hub in northern of Finland.

MORE: 10 PLACES TO TRAVEL TO DURING WINTER 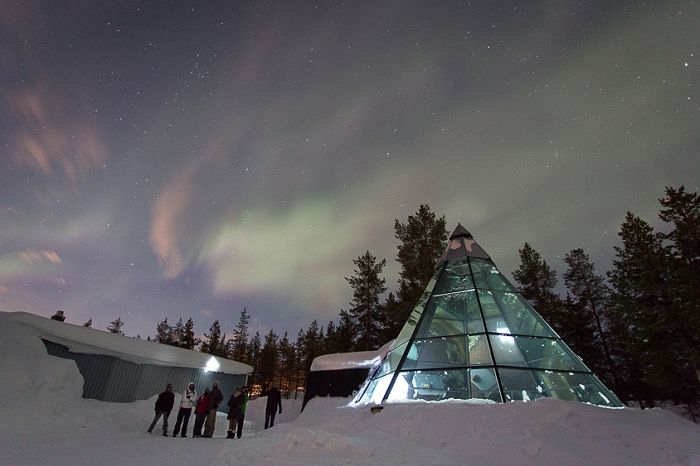 Northern lights over the Igloo village by Robbie Khan From Flickr

At the Hotel Igloo Village, you pay for your accommodation but you will also be required to pay for extra amenities including drinks, food and firewood for when it becomes too cold. The Smoke Sauna is only open to groups who book – not to the public, and that is also an extra cost. There is a restaurant within the village but breakfast foods are often not warm food, and most Scandinavian meals include a lot of meat, so vegetarians should be noted of this. 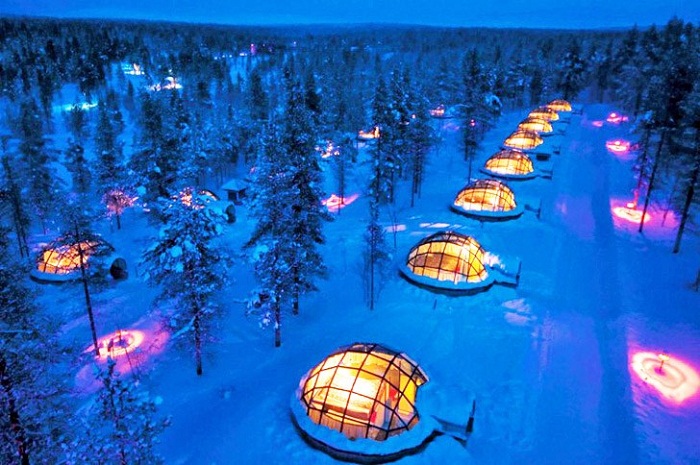 During the day, the hotel offers day trips and excursions for guests to go on. However, some of them are on the more expensive side, and it would be more beneficial for guests to research and book their own excursions external to the hotel to get the most value for money trips. During the winter, however, daylight hours are shorter and so excursions and day trips may not run or will run shorter than allocated time. You are able to hire skis for a reasonable price and there are places to ski around the hotel village. There are also snowmobiles, husky (dog) sleds and reindeer sleds to enjoy around the village all for an extra fee. 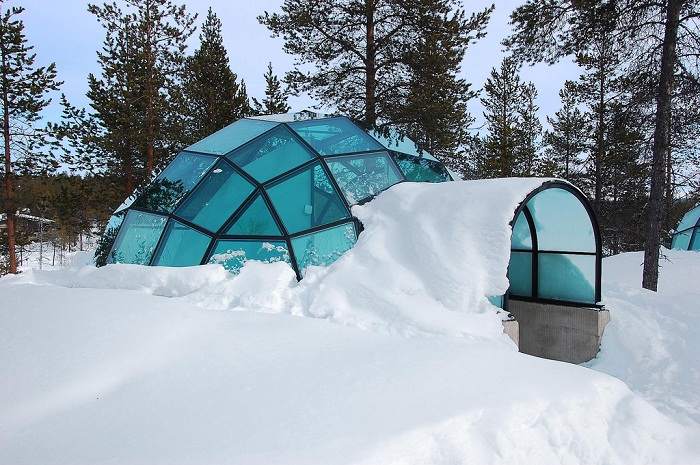 Finnair, Blue1 and Ryanair flies to Helsinki and a long list of regional airports from London Heathrow, Manchester, Edinburgh and Dublin. Finnair flights are ideal for you if you wish to continue your journey from Helsinki by air to the Western Lakes, Lakeland or Lapland where the Hotel is located. 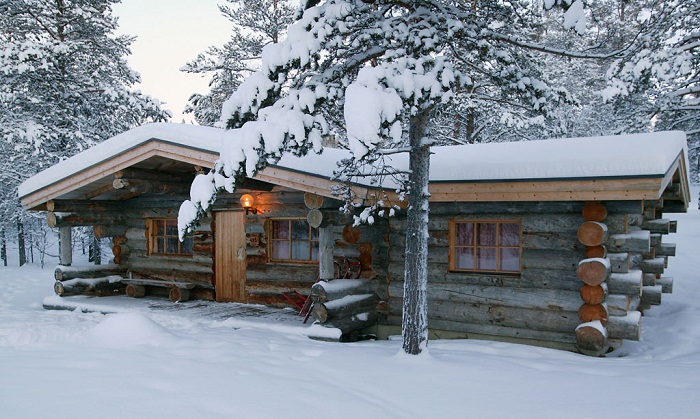 Hotel & Igloo Village Kakslauttanen is situated in the Saariselka Fell area amidst beautiful Finnish Lapland scenery in the vicinity of Urho Kekkonen National Park along the road leading to Nordkap and the Arctic Ocean. Car or snowmobile transfers can be arrange by the hotel

Best time to go and when to book 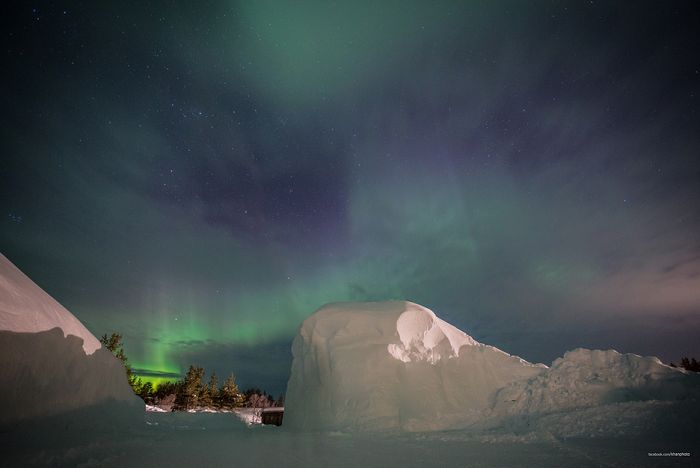 To get the highest chance of viewing this dazzling display of lights, it’s best to travel between late September to March which is snowfall season so be prepared for colder weather, particularly if you will be in the hunt for the lights which often means not within a city. Make sure to check the weather forecast before heading out in search of these lights – you need a clear sky as the light show occurs very high up in the atmosphere.
The Northern Lights “oval” of light is most likely to be seen from Alaska, northern parts of Canada, Greenland, Iceland, Northern Norway, Sweden, Finland and the western half of Russia. However the exact location of the Northern Magnetic Pole changes each year and so viewings of the Northern Lights can never be fully determined. It is this rarity that makes them all the more unique. 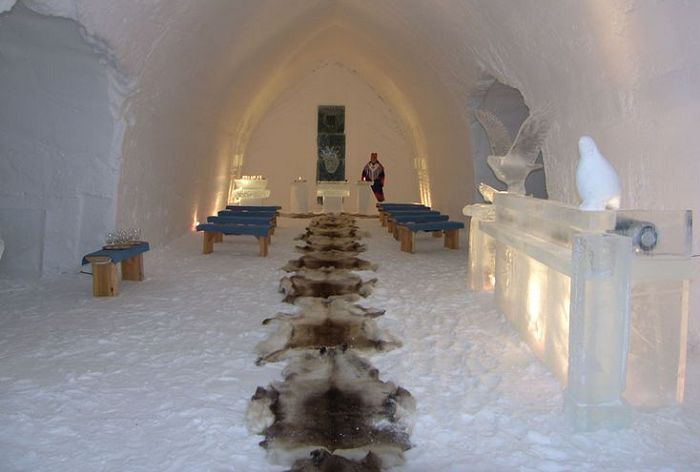 Finland is flexible when it comes to deciding on when to visit. The months from May through September offer the mildest weather but also the most tourists. The early summer months are especially pleasant in Finland but also keep in mind that the Finnish summer holidays are in July, which equals higher prices, some business closures, and advance reservations. And after that, August and September have more annual rainfall. Therefore it’s best to try and make your way there in June. The weather in Finland will be warm, outdoor activities and events are commonplace, and you can witness the Midnight Sun.
At the other end of the spectrum are the winter travellers. When to go to Finland in the winter months depends on the kind of activities you like to do. If you want to see the Northern Lights, aim for December. It’s a pricey time of year, but Christmas in Finland with all the snow and the local events, is a great experience. 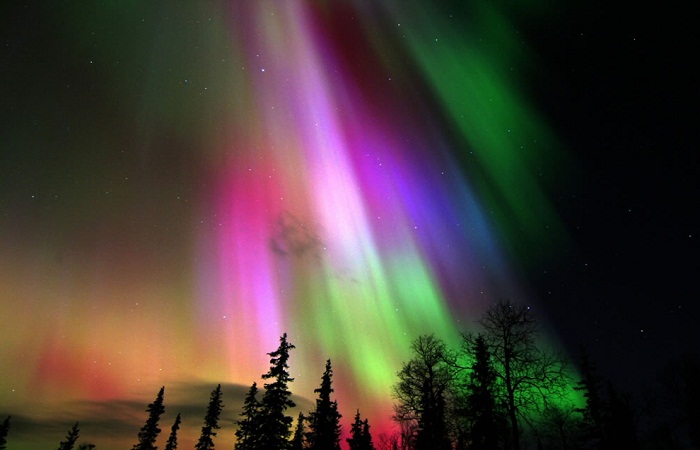 Photo by Love these pics.jpg

The most important part of staying in such a remote and cold part of the world is that you should pack warmly. Bring your camera for the Northern Lights show, but bring a balaclava, thick scarf and hat for your face as wind chill and snow conditions can be on the more extreme side. This hotel is recommended for guests who want the highest possible chance of seeing the Northern Lights. It is not a conventional hotel, not one with luxury, but one with experience and colour. 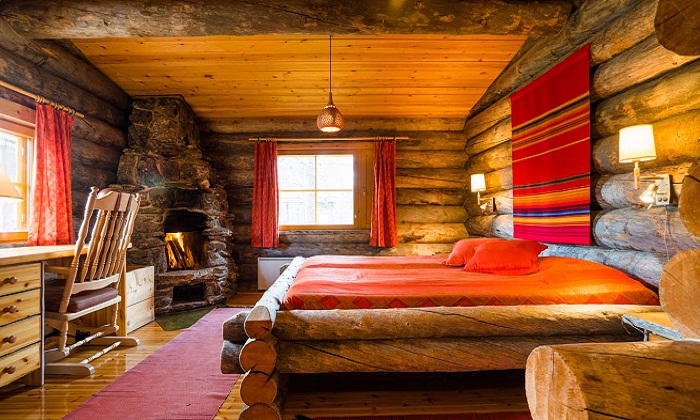 The hotel is best suited for families or couples, where wedding and honeymoon packages are available. Just be warned that more times than most, the place will be fully booked, particularly in the winter months when viewings of the Northern Lights are more frequent. To avoid being disappointed, book early or check the website for booking information. Hotel & Igloo Village is located in Kakslauttanen, FI – 99830 Saariselka, Finland (+358 16 667100